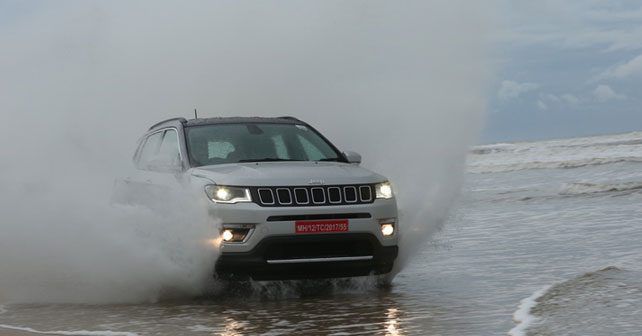 Jeep’s compact SUV is finally a reality. And it’s made right here in India! It’ll be in showrooms not long after you read this – so, pay attention should you need to whip out your chequebooks?

The word ‘Jeep’ is synonymous with the acronym ‘SUV.’ So, the fact that the world is currently SUV-crazy should certainly work in Jeep’s favour. And it has. The Jeep brand has been consistently growing its global sales over the years. Now it hopes not only to exponentially grow those volumes, but also to make a dent in the Indian market with the all-new Compass – a product that’s not only suited to the market, but one that’s built here as well.

Jeep’s entry into India last year, with the Grand Cherokee and Wrangler, was a bit of a learning experience. It was an opportunity for customers to learn about the Jeep brand. At the same time, it was an opportunity for Jeep to learn how value conscious the Indian customer really is. They found out very quickly that a Wrangler at 70 lakhs and a Grand Cherokee at a crore-plus was never going to work.

And that’s where the Compass comes in. Jeep India MD, Kevin Flynn, has assured us that the Compass will be very competitively priced. Expect it’s three variants to be somewhere in the 18-23 lakh range – somewhere in between a Hyundai Creta and Tucson perhaps. But don’t for a minute think that Jeep has tried to build a cheap car. This Compass – built in India for the domestic market, as well as for export to other right-hand drive markets such as the UK and Japan – is an extremely good quality product. In fact, quality levels are on par with the far more expensive Grand Cherokee. I would even go so far as to say that the whole car feels more comprehensively engineered and modern than any other car in the Jeep stable. Let’s just leave the fire-breathing Grand Cherokee SRT-8 out of this discussion, please.

Visually, the Compass certainly takes it cues from the Grand Cherokee – which makes it look quite a bit bigger than it really is. Mark Allen, the head of Jeep’s Design Studio, says it actually takes its inspiration from the original Jeep built for the US Army during World War II. He says everything from the seven slots in the front grille to the square wheel arches are inspired by this legendary 75-year old design. Maybe so, but the overall impression made by the Compass is one of modernity and sophistication. At the same time, it has that all-important macho Jeep appeal. Mark says his entire design team regularly goes rock crawling at Moab in Utah in the western United States to understand the importance of things like break-over and approach angle. The short overhangs, front and rear, ensure that the Compass looks very purposeful. Meanwhile, the deep front air-dam, black surround for the front grille, black roof, and chrome trim on this top-of-the-line Limited trim ensures that it looks premium at the same time. In profile, the 17-inch rims struggle to fill the wheel arches – 18-inch wheels would certainly add to its road presence. 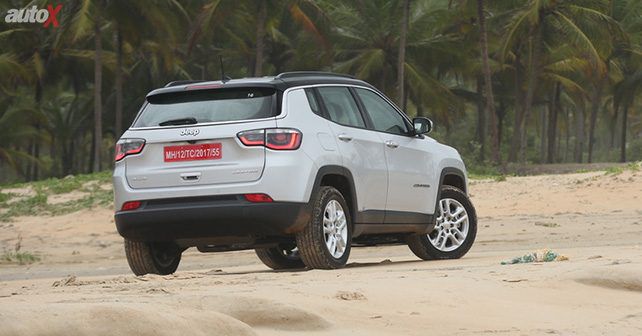 But, while 18-inch wheels would look good, they wouldn’t be able to match the current set of wheels and tyres for ride comfort. The first thing that strikes you when you get out on the road in the Compass is its magic carpet ride. Not only is the suspension extremely compliant, but you can immediately tell that the chassis is very rigid. Absolutely nothing on the road surface upsets this car, and no road imperfections make their way into the cabin – at all! But that’s not say that the Compass wallows or sways when you show it a corner. Sure, it has a little bit of body roll – but, on the whole, the ride-and-handling balance is near-perfect for our roads.

The other thing that surprises you is just how much grip the Firestone tyres provide – both on and off-road. You can throw the Compass into a corner like it’s a hot hatch, with the confidence that the suspension and tyres will extract the grip to enable you to power out.

So, on-road ride-and-handling is impressive. But what happens when you take the Compass off-road – this is a Jeep after all? Well, that’s when things start to get really interesting. You see, you can have the Compass in both two-wheel and four-wheel drive versions. But it’s not full-time all-wheel drive. Instead, it’s an electronic four-wheel drive system that sends power to the rear only when you need it. Sure, it has a dial in the centre console that says 4WD Lock, which allows you to switch between four driving modes, but can this compact SUV really live up to Jeep’s heritage when the going gets tough?

Jeep India had set up an off-road trail for us just outside Goa, adjoining the Netravali Wildlife Sanctuary. Now, they didn’t just place a handful of cones on a damp field. No, they actually took the trouble to create a full course that cut through the jungle – which resembled a rainforest at this time of the year. The trail consisted of river crossings, slush (lots of it), steep inclines and drops (really steep), rocks, logs, the works. Well, it amazes me to say that the Compass simply sailed through the entire course. It didn’t even break a sweat. The chin didn’t graze, the undercarriage didn’t complain, and the all-terrain tyres – the same tyres that performed absolutely admirably on the tarmac – managed to eek out grip where there simply wasn’t any. It was genuinely impressive!

The performance was helped, of course, by the very capable suspension and electronic systems, but also by the highly tractable engine. The 2.0-litre Multijet diesel motor – which makes 170 horses and 350Nm – is extremely quiet and refined. The insulation in the cabin is very good too, so none of the diesel clatter (whatever’s left of it anyway) makes it into the cabin. 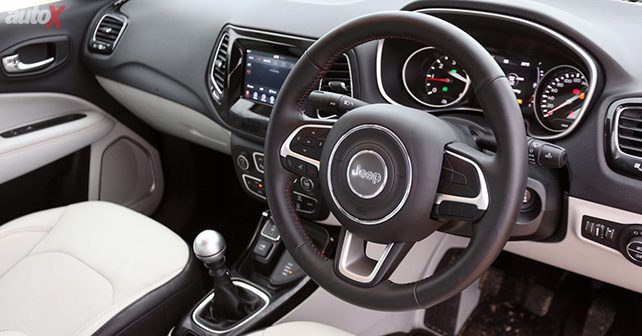 Speaking of the cabin, it’s actually quite stylish. Of course, you’ve got a touchscreen – albeit on that’s not very responsive – which has Apple CarPlay and Android Auto. This Limited trim version also gets some rather nice grey leather with red stitching. All versions get lots of soft-touch plastics and quite tactile materials on the whole. The only trouble with the cabin is that it is quite small – especially at the rear. Clearly, you want to be seated in the driver’s seat of this machine.

Be prepared, however, to row a 6-speed manual gearbox if you happen to find yourself in the driver’s seat. The Compass will be launched with this 2.0-litre diesel mated only to a manual gearbox. An automatic is likely some months later once the volumes pick up. But a couple of weeks post launch (which is slated for the end of July) you’ll also be able to get a quite advanced 1.4-litre Multi-Air petrol motor with the option of a 7-speed dual-clutch automatic. That being said, if you do want to go off-road occasionally, the torque of this diesel motor comes to great use. And I, for one, find a manual transmission far more involving and fun to drive than an automatic. Sure, the throws on this one are a little long (and the gear knob itself is a little too thick) but the shifts themselves are smooth and pleasing.

I have to admit that I was a little sceptical before I drove this car. I’ve seen it at international motor shows for some time, and I’ve never really been convinced. But now, having seen it out on the road, and having actually driven it – on and off-road – I simply can’t find anything major to criticise. It’s just a really well put together a machine that feels thoroughly engineered and thought through. The only trouble Jeep will have is that it’ll have to work overtime to ensure that its 50-odd dealers are able to put enough prospective buyers in the driver’s seat of their test cars. And that’s key, because it’s only once someone drives the Compass that they really get a sense of the quality of the product. That’s to say nothing, of course, about the fact that you don’t really want prospective customers sitting in the back seat – because it is pretty cramped back there. So, really, the tight cabin is about the only thing you can really fault the Compass for.

But, as an everyday machine, the Compass will be equally comfortable on city streets, national highways and off-road trails. This really could be your go-anywhere machine!