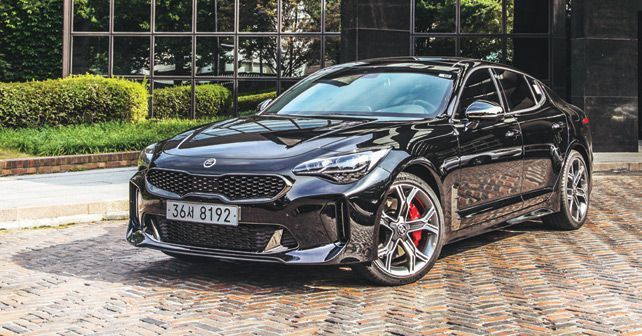 The stunning new Stinger is a clear representation of the sheer capability of the Kia brand. Easy on the eyes, and equally nice to drive – what’s not to like?

The ‘halo effect’ is described as “the tendency for an impression created in one area to influence opinion in another area.” The idea here being that you’re lured into a Kia showroom by the sexy Stinger on display, and you end up putting a down payment on that Sportage SUV that you’ve been eyeing for some time. Not to mention the fact that the Stinger is a rolling advertisement for the R&D capability of the brand. And a very good one at that!

The Stinger was born out of the rather striking Kia GT concept that debuted at the Frankfurt Motor Show way back in 2011, which heralded a totally new direction for the brand. This concept was so important, in fact, that it now sits at the main entrance of the Kia Design Centre at the Hyundai-Kia Namyang R&D facility in Korea. The designers and engineers both worked equally hard to ensure that the final product – the Stinger – doesn’t stray too far away from the concept. Well, one look at the car here and you know that they’ve achieved their objective.

Unique style
Certainly, the Stinger’s style is all its own. It has all the right cues of course. The long bonnet hints at some serious firepower underneath. The fastback rear-end, meanwhile, hints at its rear-drive layout. 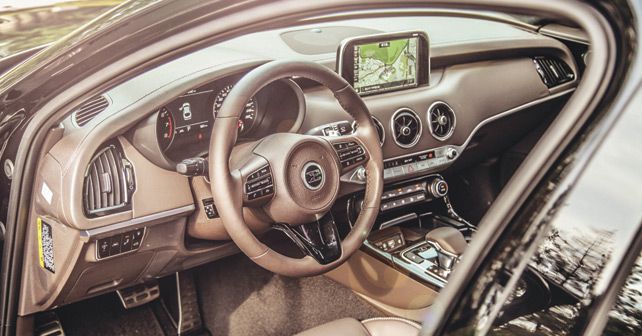 The wide tiger-nose grille – a signature of the Kia brand – gives it a menacing squat stance. Yes, it shows off its lines better in brighter colours, but it looks pretty striking in the all-black too. And it’s the little details that really catch the eye – such as the front turn signal, which is made up of a cluster of LEDs in the headlight housing, the pattern of which matches the design of the front grille. Even better are the taillights that extend well into the rear fenders, which are capped off with semi-circular indents in the sheet metal. Our test car is the Korean spec car, which has a unique logo – elsewhere in the world, the Stinger proudly carries prominent Kia logos.

On the inside, it has all the right ingredients as well – a sporty three-spoke steering wheel, clear analogue gauges with a wide multi-information display between the two dials, soft leather with contrast stitching, minimalist design, circular air-vents, aluminium speaker grilles, an electrically adjustable steering column and properly premium materials. The Stinger intends to compete on equal footing with the likes of Audi, BMW and Mercedes, and it’s come to the party with all guns blazing. It reminds me, actually, of the original Mercedes-Benz CLS – Merc’s stylish four-door coupe, with its frameless doors and svelte profile. The Stinger is a little more audacious though – it certainly looks as though it means business. One disadvantage of the coupe-like roofline, however, is limited headroom in the back.

Accelerated learning curve
Our test car was an all-wheel drive Stinger, but not the Stinger GT with its 3.3-litre 370 horsepower twin-turbo V6 petrol motor. This was no slouch however, with a 2.0-litre four-cylinder turbo-petrol producing 250 horses, which was mated to the very familiar – and very impressive – ZF 8-speed automatic transmission. In normal mode, the car feels very refined and easy to drive. Put it in sport and everything tightens up, as the power delivery becomes more urgent. Unfortunately, this test consisted mainly of city and highway driving, with no twisty sections to really test the handling. From what I could tell, though, the car feels extremely well balanced and composed – even at three-digit speeds. The closest I came to really testing its dynamic abilities was during an emergency lane change when a truck in front of us decided to perform an unscheduled drop off consisting of one of the boxes from its cargo bay – in the fast lane of the highway! Suffice to say, the Stinger handled the quick right-left at 120km/h with the utmost ease – without the electronics ever having to kick in. 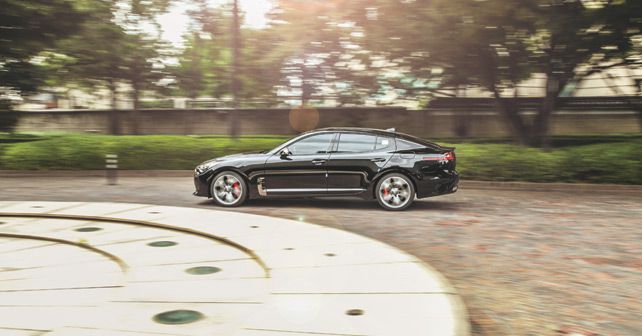 What really struck me, on the whole, was the Audi-esque refinement and fluidity of the driving experience. Everything from the high-speed stability and insulation of the cabin at speed, to the steering inputs and gear changes, all of it is handled with the deft touch of a premium German car that’s benefited from almost a century of engineering excellence. Such is the accelerated learning curve of the Hyundai-Kia juggernaut.

I now look forward to driving the Stinger GT for a more focussed driving experience. As yet, I’ve had to remain content with hearing the exhaust blaring at the Namyang test track – it sounds just aggressive enough to make up for the slightly muted exhaust note of this 2.0-litre turbo-petrol.

So, could this be the perfect ‘halo’ car for India? Well, if you ask me – it’s the perfect halo car. Period!

X-factor
Feels every bit as premium and refined as the cars it’s targeting – the very best from the German luxury triumvirate of Audi, BMW & Mercedes.