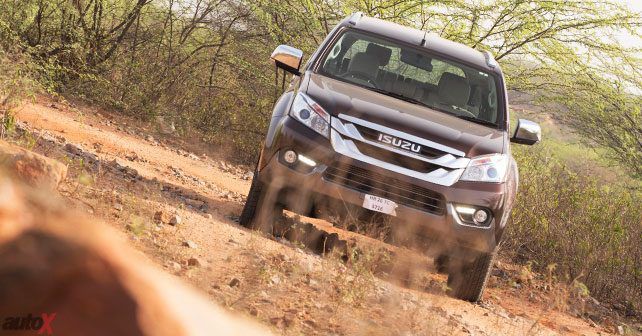 Isuzu finally replaces the ageing MU-7 with the MU-X, we drive this full-size premium SUV and find out how it fares.

If you have been following up on our work at autoX you would know that we quite like the Isuzu D-Max V-Cross. For it is rather capable and makes quite the lifestyle statement. In fact, it's become quite the favourite amongst off-road enthusiasts as well as those who are talking about taking the flatbed off to do away with the concept of rear overhang altogether. But that’s a discussion for another time.

Buoyed by the success of the D-Max V-Cross, Isuzu has finally brought out the successor to its MU-7 SUV in the form of the MU-X. In fact, the D-Max V-Cross and MU-X share the same ladder frame platform that incidentally also underpins the Chevrolet Trailblazer. On the face of it, this is a good thing as the MU-X looks fairly intimidating on the streets with its high set body and rugged stance. The front of the SUV has the same headlamps and grille as the D-Max V-Cross, meanwhile, a new dual tone front bumper with integrated LED DRLs lends some flair.

Although, keen-eyed readers will notice that this is the pre-facelift model which has made it to our shores. The updated model available internationally comes with LED headlamps, dual-tone dashboard and a new touch-screen infotainment system with MirrorLink connectivity for smartphones.

Coming back to this model, its side profile is dominated by massively flared wheel arches and the large 17-inch diamond cut alloy wheels shod with 255 / 65 section rubber. Around the back, a similar grey and body coloured dual tone bumper rounds up the tall stance of the MU-X well. 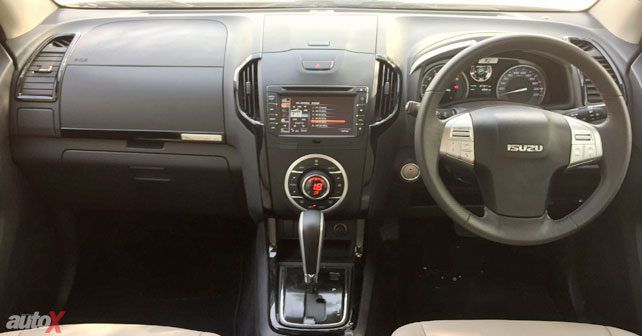 My only cause for concern with the MU-X is its interior. While there isn’t anything wrong here, it’s just that its competitors (Toyota Fortuner and Ford Endeavour) come with leather draped dashboards and more toys. So, this pre-facelift MU-X’s all black dashboard and a plane-Jane centre console doesn’t give it the most attractive interior out there. Still, it does have a decent equipment list with a touch-screen stereo, keyless entry and go, electrically adjustable driver’s seat, one-touch folding second-row seats with 60:40 split that can also recline, a 10-inch DVD screen for rear seat passengers and a rather nice cruise control system.

The seats are big and supportive for front and second-row passengers. In fact, even the third-row seats are well cushioned. And because they are high-set, they aren’t the most uncomfortable third-row seats out there. The only issue is that the B-Pillars and positioning of the second-row seats result in some twisty ingress and egress for your feet. The only time perhaps when the pick-up truck traits of the vehicle come into play.

Isuzu’s strong point has always been its powertrain systems and the case is no different when it comes to the MU-X. Its 3.0-litre turbo diesel engine feels smooth at initial revs and while it is loud (especially that fan), power delivery is smooth. It's only past 3,000 rpm that the diesel clatter from the oil burner becomes evident. Power comes in nice and linear and the engine is willing to rev to the 4,000 rpm mark. With 175bhp and 380Nm on tap, the engine offers decent driveability but we have become used to more powerful SUVs in the segment, so it’s not the punchiest SUV out there to drive. 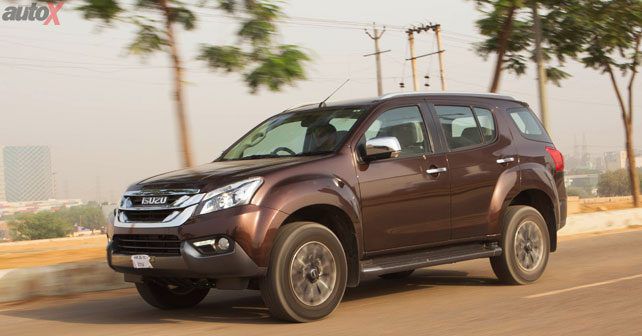 Meanwhile, the six-speed automatic gearbox goes through the gears in a very smooth manner while driving with a light foot. Go heavy on the throttle and there is a little delay in shifts but that’s the case with all of these big, heavy diesel SUVs, after all, we aren’t in performance car territory here.

The Isuzu MU-7 was known for its comfortable ride quality and the MU-X is no different with its independent double wishbone front suspension and five-link rear suspension. At slow to moderate speeds, the ride is very comfortable for a ladder frame vehicle. Build up the pace though and you do feel the sharper bumps and ruts filter through the suspension. The steering also passes on some of those jolts from big potholes to the driver. Speaking of the steering wheel, at parking speeds the steering feels heavy (something I like in a vehicle, but others may not prefer). As the speeds go up the steering has a nice heft to it and makes you feel confident on the roads. Apart from some vagueness in the dead centre position, the MU-X will take wide sweeping bends at triple digit speeds with confidence, thanks to its well-balanced nature. Keeping in tune with the type of vehicle, the MU-X makes for a very nice highway cruiser with its comfortable ride. Keep the engine in its mid-range and the refined powertrain compliments this nature.

This particular model we were driving was the 4x4 version with the shift-on-the-fly mechanism with 1.000 gear ratio for a high-speed four-wheel drive and 2.482 gear ratio for 4x4 low. So, in case you are travelling to or live in off-beat destinations, the MU-X is capable of lugging all of its weight around in slushy and snow covered conditions just fine. And because it’s an Isuzu, you will have complete peace of mind about its reliability and consistent performance. 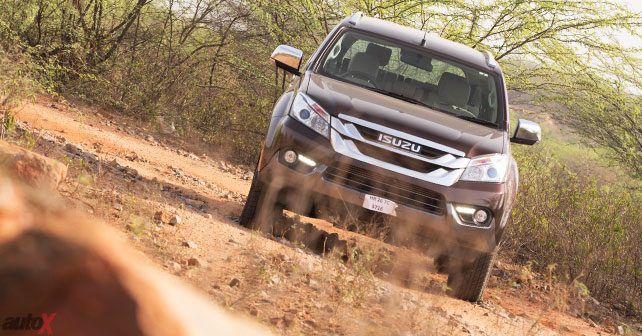 Another factor that sways in the Isuzu’s favour is its relatively affordable price tag. This top-end 4x4 automatic costs Rs 25.99 lakh the same as the entry-level 4x2, manual gearbox versions of the Fortuner and Endeavour. When it comes to the Ford, you get the smaller 2.2 engine model only. In contrast, the 4x2 version of the MU-X complete with the five-speed automatic gearbox is even more affordable. 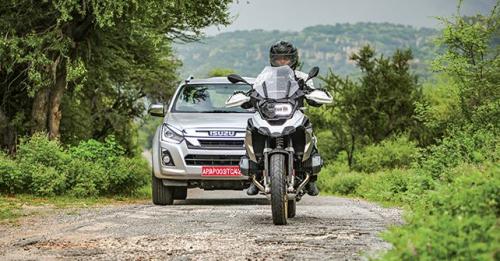 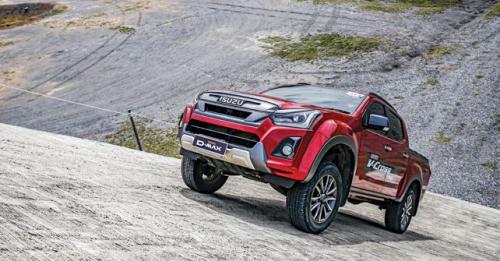 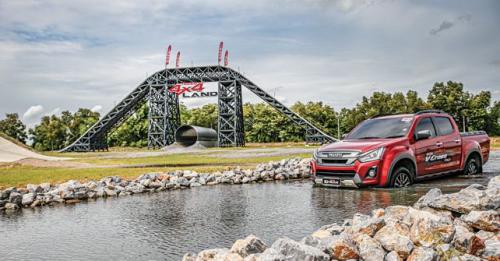 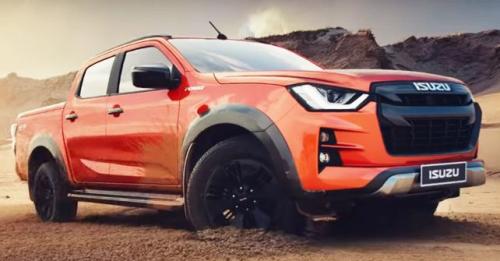