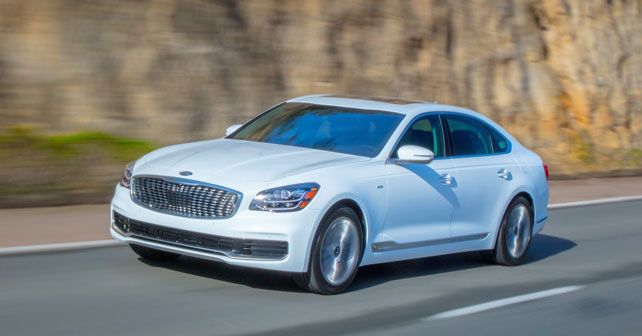 Kia’s brand-new flagship, the K900, debuted at the New York International Auto Show earlier this year – and it reaffirms Korea’s intent to take on the very best from the German luxury triumvirate of Audi, BMW & Mercedes.

It’s no secret that Kia will debut in India in September next year with a compact SUV based on the Hyundai Creta. The brand introduced itself to great fanfare at the Auto Expo in Greater Noida in February this year. Now comes the question of deciding the rest of its Indian line-up. Being considered are the likes of the Stonic CUV and the Carnival MPV – both quite stylish in their own right. But what we have here is Kia’s brand-new flagship – known as the K900 in the US and the K9 in Korea. This is, quite literally, a rolling demonstration of Kia’s technical competence, and virtually two tonnes of proof that they’ve got the Germans in their crosshairs. 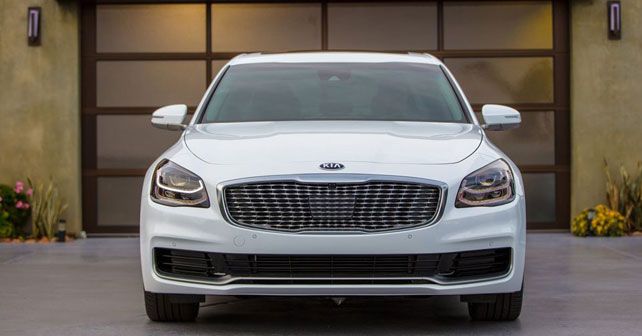 What about the tiger’s nose?

Well, it’s there – the trademark ‘tiger-nose’ grille has been bumped up in size to fit the scale of a luxury flagship. The creases on the bonnet follow the indents in the grille, and so does the top of the windshield. In fact, there’s even a hint of the ‘tiger’s nose’ in the steering wheel. To me, though, the front grille looks about as aquatic as it does feline – and it certainly doesn’t appear as individualistic as, say, the extremely pretty Stinger sports sedan. From the back as well, the K900 doesn’t appear as distinctive as Kia’s other models. In fact, there’s a definite hint of Mercedes in the taillights. Plus, I’m not entirely sure about the aesthetic appeal of the chrome rings around the taillights – it just looks like it’s trying too hard. That said, the LED DRLs (daytime running lights), both front and back, are unique and certainly make the K900 stand out. On the whole, it does look quite cohesive and stately and has quite a lot of presence on the road. 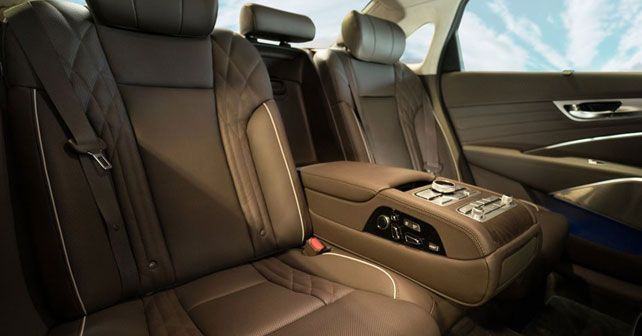 The cabin is where this flagship Kia really cements its luxury car credentials. It’s got an expansive two-tier dash with a near-perfect mix of leather, matte wood and brushed aluminium. It’s also a massive 12.3-inch touch-screen and a configurable digital instrument cluster. The speaker grilles are aluminium too, and conceal a 900-watt, 17-speaker Harman Kardon / Lexicon sound system. Of course, there’s every connectivity option you can think of, as well as wireless charging. There’s also a 9.7-inch multicolour head-up display that gives you all kinds of information directly in your line of sight.

The highlight of the cabin, though, has to be the phenomenally comfortable seats. The fronts are 20-way adjustable – to the extent that the side bolsters automatically adjust when you select Sport mode. The rears are no less impressive, with their own adjustments of course, as well as heating and ventilation. The levels of fit, finish, design and quality are simply second to none in this cabin – and the piece de resistance is the Maurice Lacroix analogue clock in the centre of the dash. 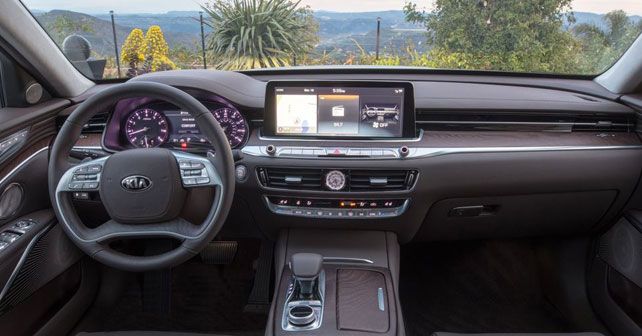 Even better from behind the wheel

Our test car was fitted with the twin-turbo 3.3-litre V6 from the Stinger. In this trim it produces 365bhp and 510Nm of torque. Sure, it’s been tuned more for drivability and less for peaky power delivery, but it’s every bit as urgent and responsive as I remember it being in the Stinger GT I drove late last year. The only thing I can say is: what a motor! It’s smooth, has no lag, revs like a naturally aspirated engine, and has explosive power – and it sounds good too. Even better than the motor, though, is the transmission – an 8-speed torque converter developed in-house. You can be in Sport mode, have your foot planted to the floor, ask for an upshift through the paddles, and there’s no perceptible drop in acceleration or delay from the gearbox whatsoever – it just selects the next gear, continues surging forward, and does so in the smoothest, more indecipherable way possible. It’s almost uncanny.

What struck me immediately about the K900, as we drove out of Seoul, wasn’t the urgency of the powertrain, but the amount of tech packed into this machine. The 360-degree camera made manoeuvring out of the parking structure a breeze. As I indicated to turn out of the parking lot, rear-facing cameras hidden in the side-view mirrors neatly threw up a live image in the instrument cluster to ensure that there aren’t any blind spots. I wonder why no one else has ever thought of that.

After a while, though, all this tech started to get a little annoying. I had to turn the navigation instructions off, because I kept getting warnings about pedestrians in crosswalks and curves in the road – imagine the level of warnings this polite lady would have to dish out in India? No doubt, she’d be tearing her hair out in no time. And then, of course, there’s lane-keeping assist (which I despise in any car), as well as all the other collision warning systems that simply didn’t like my driving. I freely admit, however, that if you drive carefully, these systems do actually help to keep you on the straight and narrow. Fortunately, for me, at least I didn’t set off the Driver Attention Warning (DAW), which detects drowsiness and inattentiveness. There are also systems that can detect if an object is crossing behind the vehicle when you’re reversing, as well as a system that can detect potential hazards when you’re opening the doors. Suffice to say, the only thing that’s capable of causing a mishap in this car is the imperfect mass of muscle and collagen seated in the driver’s seat. 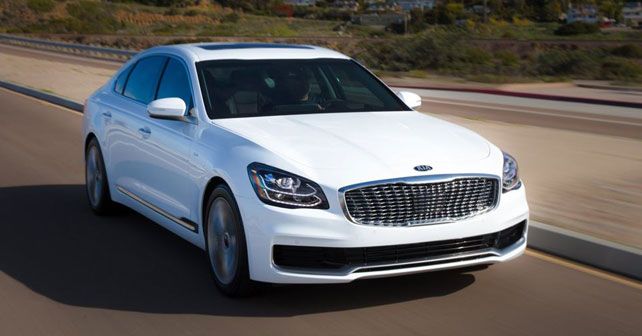 But what was most impressive about the K900 was the way everything came together when we got a couple of kilometers of twisty roads in the countryside – with the exception, that is, of the brake pedal, which remained a bit numb. On the highway, the K900 was soft – and even a bit wallowy – in Comfort mode. But put it in Sport and everything tightens up immediately. The steering is direct, the suspension is just on the right side of firm, and the body control is impeccable. For a car of this size, you can truly throw it around tight bends – and it’s completely unflappable. Even with the traction control off, it’s impossible to catch the all-wheel drive system napping. Let’s just say that you can certainly sense the hand of Albert Biermann, the former chief engineer at BMW M – now the VP of vehicle testing and high-performance development at the Hyundai Motor Group (the parent company of Kia).

At the end of the day, the K900 offers S-Class levels of opulence at E-Class pricing. Is it right for India? Probably not yet – unless, of course, Kia can seriously undercut E-Class pricing in India by a good margin. That would certainly set the cat amongst the pigeons. But I don’t think Kia asked us to drive the K900 because they’re seriously evaluating the product for India. I think they asked us to get behind the wheel to get a true sense of their competence and ability – which is quite simply second to none. Truly!

X-factor: Germany be warned, Korea is here – and it means business!