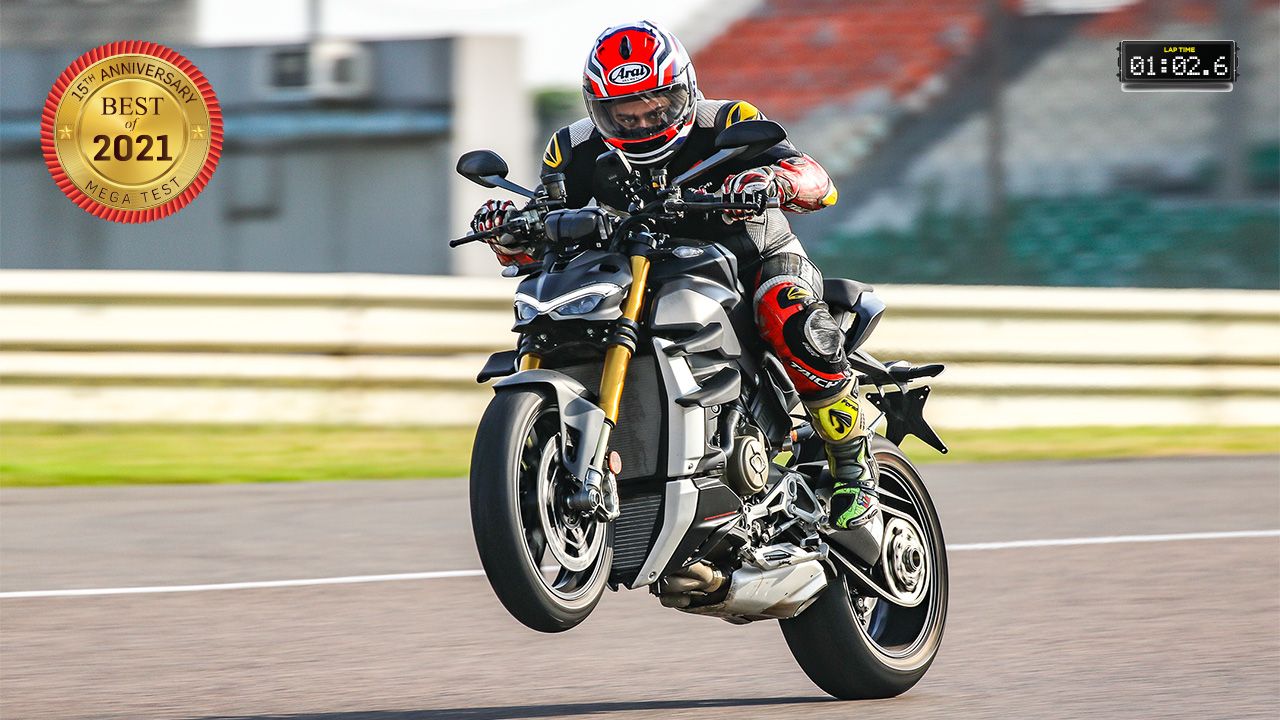 On the surface, the Streetfighter V4 is a Panigale V4 without its beautiful bodywork. But just because you have it naked doesn’t mean that you can have your way with it. In fact, it can be a bit of a handful if you are not careful. The Streetfighter V4 is raw, brutal, and unforgiving in its quest for performance and speed. So, if you try to mess around with it and poke it in ways it’s not likely to appreciate, there will be hell to pay!

But unlike its fully-faired sibling, it’s not a backbreaker – it has relaxed ergonomics and a well-padded saddle. Plus, it’s quite light and manageable between your legs, despite tipping the scales at nearly 200kgs. All in all, these updates show that it’s meant to set the streets on fire rather than smash lap records. However, as we found out, it’s equally capable of doing the latter. In typical Ducati fashion, it also packs all the modern bells and whistles that you’d expect in a top-dog hyper-naked. The V4 S version that we tested comes equipped with semi-electronic suspension and forged alloy wheels, which means that it is suitable for both the road and the track.

As mentioned in the beginning, don’t be fooled into thinking the Streetfighter has been toned down for the road. In fact, it’s every bit as explosive as the Panigale V4, but in a different way. The moment you fire up its Stradale 1,103cc V4 engine, it comes to life with a sinister and raucous laugh. It’s a pity that the Monster and Diavel (devil) nameplates are already taken in Bologna, for the Streetfighter V4 is easily the most ungodly-sounding naked amongst its siblings. The way this motor idles is a sign of things to come – as if your senses are being prepared for the oncoming assault. With 200+ horses on tap, it shoots ahead like a guided-missile destroyer – yes, it’s that ferocious.

The steering turns in quickly, and its direction changes are fluid and smooth. It remains rock-solid around corners too. But what makes life difficult is the way it channels its power – your brain simply can’t keep pace. The surge of power starts quite early in the rev-band, so the moment you touch the throttle at a corner exit, you’ll find yourself being teleported to the next apex. Or, if you aren’t careful, into the barriers!

The beauty of the Streetfighter V4 is that it’ll never let you sleep in peace at night. You’ll always find yourself chasing the best lap time or trying to improve yourself to master the madness of this motorcycle. It happened to Simran, and it happened to me as well. We just wanted to spend more time on the track with the Streetfighter V4 to just clip that one apex perfectly, exit that one corner perfectly, brake in that one corner a little later, and so on. At the end of the day, the Streetfighter V4 S won the ‘Performance Bike of the Year’ by the slightest of margins, albeit Simran believed he could have gone even faster. I thought so, too.

Now, you may think that even the slightest error from the rider may cause the Streetfighter to throw the rider by the wayside. But that’s not the case. It’s a motorcycle that can scare the living daylights out of you, and it will, but it means no harm. With its sea of electronics and rider aids, it’ll never let you slip – and I mean never. And once you switch to the less violent ‘Road’ mode, it suddenly turns into a well-behaved blue-collared worker of sorts, who you love spending time with during mundane everyday tasks.

But when the day ends, you know that it’s the same person who’s also the leading member of the local Fight Club. In short, the Streetfighter V4 is Edward Norton and Brad Pitt rolled into one.