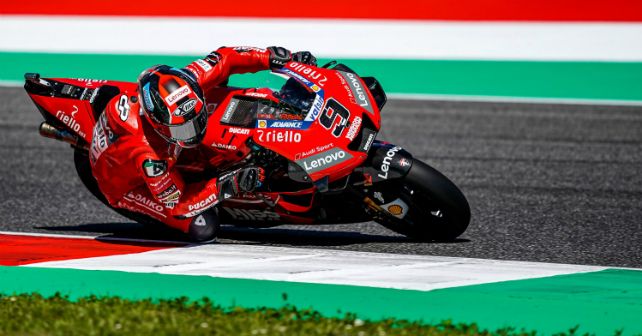 Danilo Petrucci claimed his first ever MotoGP win in a thrilling race at the Mugello circuit in Italy. The factory Ducati rider pipped Repsol Honda's Marc Marquez and Ducati teammate Andrea Dovizioso in a last lap thriller to take victory in their home round. Marquez finished in second, while Dovizioso completed the podium.

With Marquez on pole and showing strong pace in warm-up session, it looked like the reigning world champion was set to take another win of the season. As soon as the lights went out, the race went to the aforementioned script, with Marquez taking the lead and trying to break away from the rest. However, the Ducatis came back strong with Dovizioso making a spectacular start from 9th on the grid, while Petrucci and Pramac Ducati's Jack Miller stuck behind. Suzuki's Alex Rins was another surprise, and he progressed from 13th on the grid to fourth as he tagged along with the leading pack. The rest of the race saw was a thriller with five riders swapping the lead.

The second half of race saw Petrucci lead the race from the rest four. But Miller crashed out from fifth, making it a four-way battle. In the last lap, even Rins fell short of ammo and had nothing to challenge the top three. Meanwhile, Dovizioso got ahead of Petrucci in the final lap, but he immediately found himself sandwiched between Marquez and Petrucci as they slipstreamed their way past him. From then on, it was Petrucci and Marquez who fought for the top spot, and as it turned out, it was the former who was more desperate to take the win, which he did, by just 0.043 seconds!

Rins was just off the podium in fourth. Taking the fifth spot was Takaaki Nakagami of LCR Honda, who was six seconds adrift from the leading pack. Yamaha's Maverick Vinales finished sixth, ahead of Ducati test rider Michele Pirro. Despite having a good start, LCR Honda's Cal Crutchlow could only manage to take the eight spot. KTM's Pol Espargaro had another top ten finish as he crossed the chequered flag in ninth. Petronas Yamaha's Fabio Quartararo had a disappointing race - inspite of starting second, he finished the race in tenth.