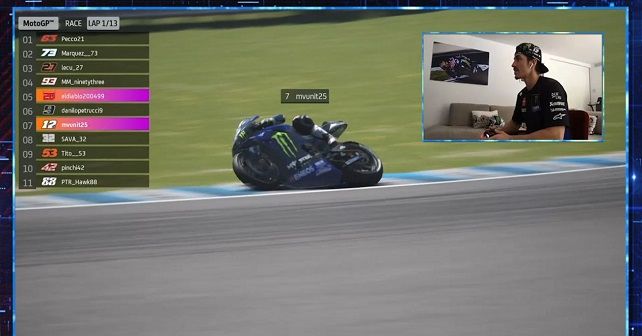 With no real racing happening in the world, MotoGP hosted the third virtual race of the 2020 season. As expected, the virtual race was full of chaos yet again, and the same three riders finished on the podium, albeit in a different order. Yamaha's Maverick Vinales won the race this time, while Honda's Alex Marquez finished in second, followed by last race winner & Pramac Ducati rider Francesco Bagnaia.

The virtual race saw participation from 11 MotoGP riders. The circuit used for the third digital race of the season was Jerez, Spain, and the riders used the latest MotoGP 2020 Playstation game for this race.

The race began with riders ending up in a huge pile-up at the very first corner. Vinales was one of the unlucky ones who was involved in the crash. Bagnaia and A.Marquez managed to steer clear and fought for the lead with closely matched lap times. However, A Marquez crashed while fighting with Bagnaia and lost ground. While he did lose time, he quickly made up for it and retained the second position. Vinales, meanwhile, made his way through the pack and was running third. In the closing laps, A Marquez crashed, which allowed Vinales to take the second spot. Soon after this, Bagnaia too crashed from the lead, and that meant Vinales took the top spot without any real challenge. A Marquez also benefitted from Bagnaia’s crash, as he took the second position from him. The three riders went on to finish the race in the same order.