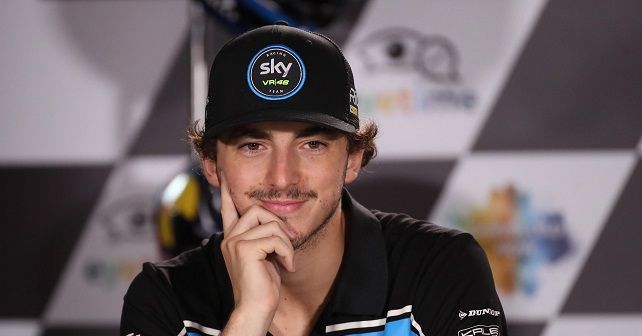 The second virtual race of MotoGP 2020 turned out to be a last-lap, last-corner thriller. Not to mention, it was full of chaos and an absolute laugh riot!

With no actual racing insight in the coming months, MotoGP organised the second edition of its virtual race or #StayatHomeGP. The racetrack for the second MotoGP Esports race was the Red Bull Ring circuit in Austria, and as the first race, there were a total of 10 participants from the current MotoGP line-up. However, this time, there were some new faces, including the 9-time world champion and factory Yamaha rider, Valentino Rossi.

While the race was full of chaos – as expected – the result was more or less similar to the last race, as the same three men finished on the podium, albeit in a different order. Taking the race win was Pramac Ducati’s Francesco Bagnaia this time, followed by factory Yamaha rider Maverick Vinales and the last race winner Alex Marquez (Repsol Honda).

The format was similar to the first race, but the race was longer with 10 laps as opposed 6 in the first edition. In addition to the aforementioned riders, the rest of the grid included the reigning world champion, Marc Marquez (Repsol Honda) and Fabio Quartararo (Petronas Yamaha), along with five new participants, namely, Rossi, Danilo Petrucci, & Michele Pirro from factory Ducati, LCR Honda’s Takaaki Nakagami, and Avintia Ducati’s Tito Rabat.

In the five minutes of qualifying, Bagnaia finished on top, followed by Vinales and A. Marquez. While they may have finished in the same order in the race, it wasn’t that straightforward – instead, it was full of chaos and a bit of a laugh riot.

The first corner saw a multiple rider pile up, which resulted in A. Marquez crashing and Nakagami leading the pack. However, soon enough, Bagnaia and Vinales took over at the front, followed by M. Marquez. A. Marquez had good pace, and despite a crash, he recovered well. However, Nakagami decided to go full kamikaze while fighting with fellow Honda riders and Marquez brothers. He first crashed into the bigger of the Marquez brothers and then took the younger one out shortly afterwards. It was a bit too funny to control our laughter seeing Nakagami going all out without any team orders, to be honest.

However, thanks to Marquez brothers’ better lap times, they quickly got away from the loose missile that Nakagami was turning out to be during the race. Alex and Marc fought with each other for the podium spot briefly, but it was the younger brother who beat the eight-time world champion to take his second ever MotoGP podium, even if it's not for real...

At the front, the battle between Bagnaia and Vinales was heating up, and like how a typical MotoGP race at the Red Bull Ring should, this one too went right down the wire for a final lap final showdown. And, like always, it was again a Ducati that won the race!

Marc Marquez finished the race in fourth, followed by Quartararo in fifth. Petrucci managed to take the sixth place, despite having a crash with Rossi, as the latter made an overzealous overtaking move in the final corner. Rossi finished in seventh. Despite his wild actions and multiple crashes, Nakagami ended the race in eighth. Pirro finished the race in ninth while Tito Rabat was tenth.