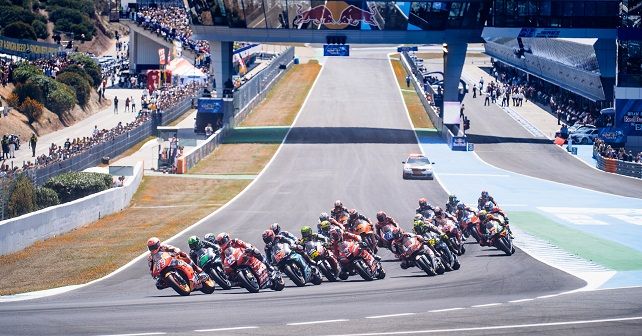 After multiple race cancellations because of the Covid-19 outbreak, the 2020 MotoGP racing season may finally get going soon! A couple of days ago, MotoGP organisers confirmed that they’re working on restarting this year’s action in a Europe-based championship with a shorter race calendar of 10-12 races over the season. Now, there have been some more developments as Dorna Sports – the commercial rights holder of MotoGP – along with the Regional Government of Andalusia and the City Council of Jerez de la Frontera have sent a proposal to the Spanish government to organise two MotoGP races at the Jerez circuit between July 19 and July 26, 2020.

In an official statement, Dorna confirmed that in an electronic meeting between Juan Antonio Marín, Vice President of the Regional Government of Andalusia, Mamen Sánchez Díaz, Mayor of Jerez de la Frontera, and Carmelo Ezpeleta, CEO of Dorna Sports, the three parties have agreed to make a proposal to the Spanish government to organise two MotoGP as well as one World Superbike (WSBK) Championship race at Jerez. The WSBK race, depending on the approval, will be held on August 2, 2020, though.

If the Spanish government accepts the proposal, the first race weekend of the MotoGP 2020 will most likely be held between July 17 and 19 at Jerez, while the second will be held after a week, with the race weekend expected to commence on July 24. Both races are expected to be spectator-less events, and only essential staff members from teams and broadcasters will be present. All the people at the event are also expected to be tested for Coronavirus.

At the moment, it all depends on the Spanish government. Once it approves the running of the events, these three races will be proposed to the FIM for inclusion in their calendars.