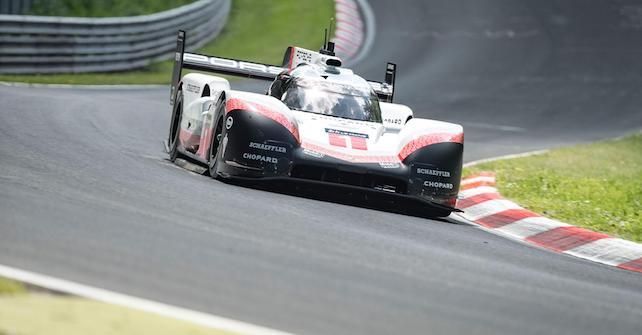 After lapping the Spa-Francorchamps circuit faster than a 2017-spec Formula 1 car, the Porsche LMP1 team brought the 919 Hybrid Evo over to the 154-turn, 20.81km long Nordschliefe loop of the fabled Nurburgring circuit in Germany and set an incredible time of 5min.19.546sec.

Porsche had earlier kicked off its 'tribute tour' by taking one of its LMP1-spec 919 Hybrid race cars, with which it dominated the FIA World Endurance Championship and the 24 Hours of Le Mans (but unfettered by the technical regulations that govern those events) and the Circuit de Spa-Francorchamps in April with Neel Jani behind the wheel.

So what could Porsche do to top it? How about taking the 919 Hybrid Evo to the fearsome Nordschliefe section of the Nurburgring and going almost a minute faster than any racing car (or any vehicle, for that matter) had been around it?

Timo Bernhard was the driver charged with the mission, and he duly delivered today as the Porsche LMP1 team continues to show endurance racing fans what's missing after the Volkswagen group decided to pull both Audi and Porsche out of the WEC last year (it had already quit the World Rally Championship after 2016) in a response to the 'Dieselgate' scam.

The stunning time by Bernhard equated to an average speed of almost 234km/h over the fearsome circuit that no longer hosts either F1 or sports prototype races due to the rapid pace of the cars causing safety concerns.

No F1 race has been held at the circuit since Niki Lauda's near fatal crash during the 1976 German Grand Prix.

Back in 2007, BMW Sauber F1 charged Nick Heidfeld with driving its F1.06 car on some demonstration laps at the 24.433km configuration of the track that comprised of the Nordschliefe and the much shorter Grand Prix circuit, which has hosted F1 races in recent times.

Heidfeld drove three laps but the car's top speed was restricted to 275km/h, and Heidfeld slowed down on each lap while passing a camera car. The lap time was declared to be 8min.34sec.

An estimate done by F1 Racing magazine in its June 2006 issue stated that without any restrictions, the BMW Sauber F1.06 could ave lapped the Nordschliefe in 5min.15.8sec.