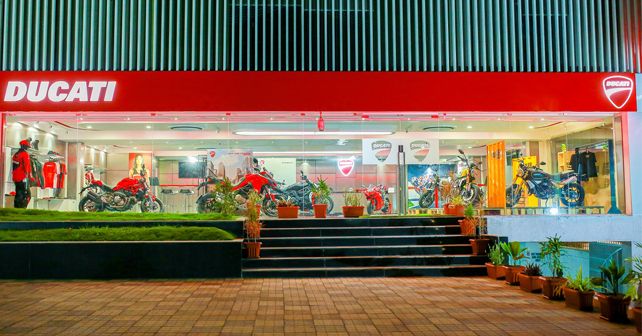 Ducati's Hyderabad dealership is the company's 9th service and sales outlet in the country.

As for the Hyderabad dealership, it’s been built to usual Ducati standards. The sales, service and spares facility is spread across 10,300 square feet and is located in Banjara Hills in Hyderabad. The new outlet will also run Ducati Approved pre-owned programme, while the new bike section will have the entire Ducati range on offer, starting from the Scrambler to all the way up to the staggering Panigale V4 R - albeit, we aren't sure if they'll have a display bike for the latter.

The showroom will also have the complete range of apparel and accessories of both Ducati and Scrambler brands. A Desmo Owners Club is also going to be formed soon, says Ducati, and it’ll be the fourth DOC in India after Mumbai, Pune and Bengaluru.

Despite registering a decline of 5 per cent in its global sales in 2018, Ducati’s annual sales figure yet again breached the 50,000 units mark. The company sold 53,004 motorcycles across the world, while their Panigale series saw a whopping growth of 70 per cent. Ducati sold 9,700 units of the Panigale range, wherein the Panigale V4 alone contributed 6,100 units sale. This helped Ducati capture a market share of 26 per cent in the superbike segment, meaning one in four superbikes sold in the world was a Panigale. Even in India, Ducati’s Panigale V4 range has done well in terms of sales. The company first launched it last year and it was initially limited to just 20 units. But in a few months’ time, and owing to the increase in demand, Ducati India had to open the order books for the Panigale V4 again. Now, with a new dealership kick-starting operations, the manufacturer will be looking forward to selling more bikes in the Telangana and Andhra region.