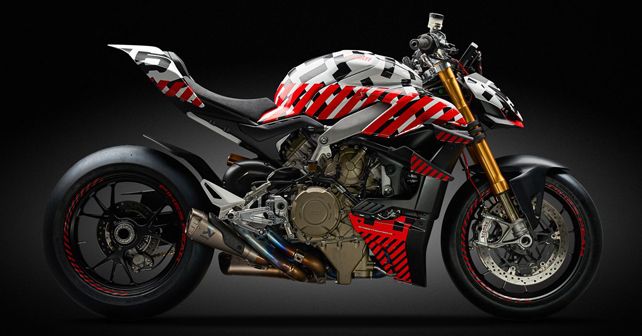 The naked version of the Ducati Panigale V4 is called the Streetfighter V4 and it'll go on sale in early 2019.

The Ducati Panigale V4 is one of the most epic superbikes in the world right now. But then, you may say that it’s a little too racy for everyone’s liking, and it isn’t meant for the ‘real world’. You don't need to rant anymore though, for Ducati has finally addressed this issue, as they’re preparing to bring the naked version of their flagship motorcycle by the end of 2019. Dubbed the Streetfighter V4, the new street naked will make its global debut at EICMA 2019 in November. But to keep us lot hooked, Ducati has released a teaser of the upcoming motorcycle, and we’ve to say, it looks very, very delicious.

Before its official unveiling, the new Streetfigher V4 will be heading to the famous Pikes Peak Mountains on June 30th, 2019. And in the build-up to its development test at the American Hillclimb, Ducati has sent out a teaser of the bike with special ‘pixelated’ livery. There isn’t much to hide though, as the Streetfighter looks quite exotic and lives up the usual standards set by other bikes from Bologna. The design is almost identical to the Panigale V4 – minus the fairing, of course – but this one gets a higher and wider handlebar. It also has aerodynamic wings to keep the front-end planted and keep everything under control when the rider exploits that manic V4 motor.

When launched, the Ducati Streetfighter V4 will lock horns with the likes of the Aprilia Tuono 1100 and others. The Streetfighter V4 is going to go on sale in global markets in early 2019, so expect it to arrive on our shores soon after.