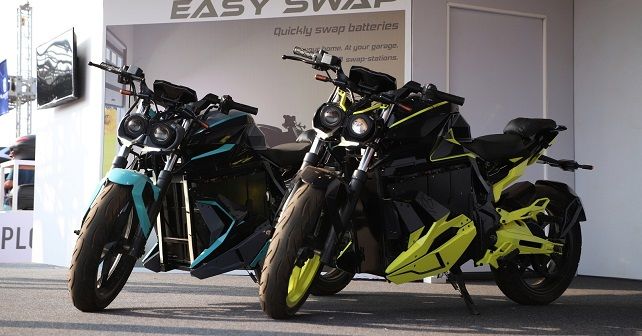 The Mantis will be able to clock a top-speed of 140km/h and will have a range of 200km, as per its maker.

Orxa Energies, a Bengaluru based electric vehicle start-up, dropped the veil on its first product at the India Bike Week 2019. Dubbed the Mantis, the company’s first EV is a performance motorcycle that is claimed to have a top speed of 140km/h and offers a range of 200km. The motorcycle will go on sale mid-2020 onwards, says Orxa.

On the aesthetic front, the Mantis does look the part and has a futuristic design, it has to be said. With multiple angles and sharp lines, it truly does have a sporty appearance. The bike also comes with LED headlamps and clip-on handlebars. There's  a huge underbelly cowl, which presumably hides the battery-pack. However, this is just a prototype and the production version may look slightly different.

The Mantis features a 9kWh lithium-ion battery pack, which is made of six 1.5 kWh modules. The battery pack can be charged fully in three and a half hours using a regular portable charger. The battery modules are swappable and that means the company plans to set up battery-swap stations, as and when it starts sales operations.

Like other new-age EVs, the Mantis will come fitted with a fully digital dashboard, which will get internet connectivity and a dedicated smartphone app for various functions, including ride analytics, navigation, and on-board diagnostics.

The Orxa Mantis is expected to have a price-tag of around Rs 3 lakh, meaning it’ll compete against another newcomer performance e-motorcycle, the Ultraviolette F77.

Ather to set up new EV plant in Tamil Nadu