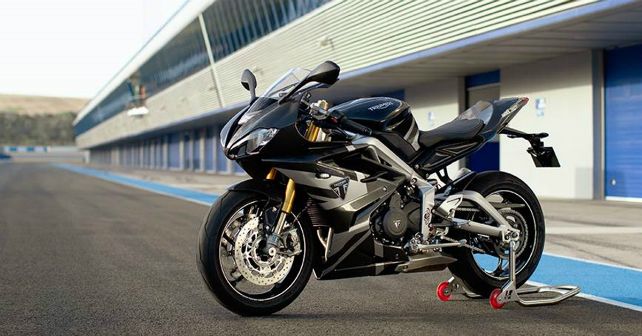 Based on Triumph’s Moto2 machine, this is the most powerful Daytona ever made and is being dubbed as the ‘racer for the road’. Limited to 765 units only, some units of the motorcycle may come to India next year

Putting all the speculations and anticipation to rest, Triumph has officially taken the wraps off the all-new Daytona Moto2 765 at the British GP in Silverstone. This isn’t a Daytona with a MotoGP livery or paint scheme – this is the real deal, a racer for the road. Based on Triumph’s motor that is also being used in the Moto2 championship, this Daytona pushes out 128bhp and 80Nm, making it the most powerful Daytona ever. The engine comes fitted with a race-spec titanium inlets valves, new cam profiles, increased comp and stronger pistons. The motor borrows its ECU from the Street Triple RS but gets a few tweaks for the additional torque output. Thanks to all the changes, the engine revs 600rpm higher than the Street Triple RS with the redline now pushed up to 13,250rpm.

As far as the design goes, the Daytona Moto2 765 shares a lot of its cues with its predecessor. In fact, the silhouette is more or less similar. The fairing and the tail section have been revised though. This one also gets a unique carbon black paint scheme with graphite grey and aluminium silver. It is the first road-going motorcycle to wear the Moto2 branding with special license from MotoGP rights holder Dorna. The motorcycle has been fitted with a Moto2 inspired Arrow Titanium race exhaust.

Just like the Street Triple RS, this one too comes with a larger TFT screen for the instrument cluster. The Daytona 765 gets five riding modes – Rain, Road, Sport, Track and Rider Configurable. All of these modes alter the throttle maps, traction control and ABS settings.

Expect the Triumph Daytona Moto2 765 to make its public debut at the 2019 EICMA show in a few months’ time. While the motorcycle has a limited production of 765 units, some are likely to make it to India.

Triumph Daytona Moto2 765 Limited Edition : All you need to know