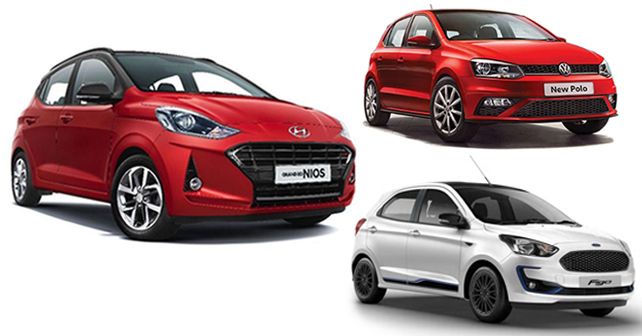 The Hyundai Grand i10 Nios is the latest hatchback to enter the Indian hot hatch scene, with its new Turbo (1.0-litre T-GDi) variants. While the upcoming BS-VI norms and Fiat's exit from India have limited the playing field to a great extent(with erstwhile contenders like the Fiat Punto Abarth, Tata Tiago JTP & the Maruti Suzuki Baleno RS no longer in the market), the Grand i10 Nios Turbo still finds the VW Polo GT TSI and the Figo Diesel in its crosshairs. Now, the Figo Diesel is not exactly considered to be a 'hot hatch', however, thanks to its 100hp (99bhp) power output, it can be considered a rival to the Polo GT & the Grand i10 Nios Turbo. So, here's a look at their on-paper comparison.

Without a doubt, the Ford Figo is the biggest of the lot and, therefore, will offer the most spacious cabin. The Grand i10 Nios' 40mm shorter wheelbase (than the Figo) is definitely a point of concern, raising doubts about the legroom (especially for rear passengers). The Polo GT, in any case, is not renowned for its cabin space. The Figo and i10 Nios offer similar levels of headroom.

Currently, the Polo GT leads the competition in terms of power, with 103bhp at its disposal. However, as we've taken the Figo diesel in this comparison, it will definitely be the punchiest to drive, due to its 215Nm of torque. Not to mention, it's the most fuel-efficient as well. The Grand i10 Nios Turbo offers an appreciable 99bhp, despite having one cylinder less. But since its rivals offer 4-cylinder configurations, the engine refinement scales are likely to tip in the favour of the Polo GT and the Figo.

An important note:  the Polo GT is the only model here that is yet to become BS-VI compliant. The plans to make it BS-VI compliant are already afoot, with the 1.2L TSI unit ready to be replaced by the 1.0L 3-cylinder TSI unit, which will produce more power (113bhp) & torque (200Nm). The 7DSG unit will also be replaced by a standard 5-speed manual gearbox.

This is where the Grand i10 Nios Turbo has a slight edge over its rivals. Since Hyundai models are known for being tech-laden (a justification for their relatively high pricing), the Grand i10 Nios Turbo offers a fairly long list of premium features like wireless phone charging, projector headlamps, and rear AC vents – all three features are not offered by its competitors.

The Figo, then, redeems itself with the recently introduced FordPass (which offers a host of connected features), in-built navigation, and some other premium offerings like keyless entry, push-button stop/start & electric folding/adjustable ORVMs. The Polo GT, on the other hand, misses out on some basics as well, such as Android Auto/Apple CarPlay connectivity.

The Ford Figo diesel offers the highest levels of fuel-efficiency, interior space, and road presence, a generous list of features, and is the only car in its segment that offers connected car features. So, keeping this in mind, the Figo diesel makes a very strong case for itself, since it has the lowest starting price of the lot.

The Grand i10 Nios Turbo, on the other hand, might come across as a bit expensive for its size. And the VW Polo GTis the least and the most expensive of the lot – a difference which can only be overlooked by a hardcore Volkswagen or Polo enthusiast.

UPDATE: While this comparison still holds true, Volkswagen India launched the BS-VI compliant Polo on March 4. With the update, the 2020 Polo is available only with 1.0-litre petrol engine options (MPi or TSI) and a choice of a 5-speed manual or a 6-speed torque converter automatic gearbox. You can check the prices of the 2020 BS-VI Polo here.