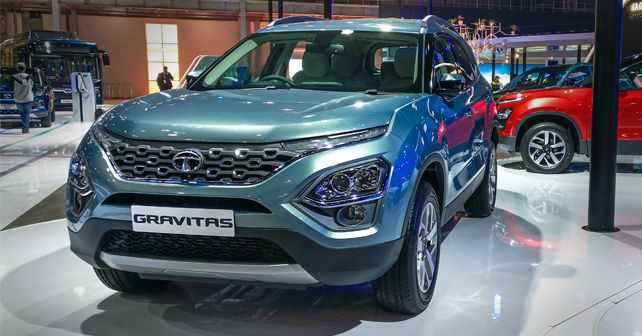 Tata Motors unveiled the much talked about SUV, the Gravitas, at the Auto Expo 2020. The Gravitas was first showcased at the Geneva Motor Show in 2019 as the Buzzard. So, here we have the five interesting highlights of the Tata Gravitas.

Based on Land Rover’s D8 platform

The Gravitas is the second Tata vehicle built on the OMEGA (Optimal Modular Efficient Global Advance) platform derived from the Land Rover D8 chassis. The first being the Harrier, of course. Based on the Harrier's 2,741mm wheelbase, at 4,661mm in length, the Gravitas is 63mm longer than its five-seater sibling to accommodate the third row. In terms of width, both are identical, but at 1,786mm in height, the Gravitas is taller than the Harrier by 80mm. Tata has raised the height so that there’s enough headroom for the third-row passengers. The Gravitas is available as a six-seater with Captain seats and a seven-seater SUV.

The Gravitas will only be available with a single-engine option. Like the 2020 Harrier, the Gravitas will get a more powerful 168bhp Kyrotec turbocharged 2.0-litre diesel engine that’s been borrowed from FCA. It also boasts of 350Nm of torque. This front-wheel-drive SUV will come with a six-speed manual gear stick as standard and as an option, it will also be mated to a tried-and-tested six-speed torque converter automatic sourced from Hyundai.

As mentioned earlier, like the 2020 Harrier, the Gravitas will come with a six-speed torque converter automatic unit. The transmission offers four driving modes – Park, Neutral, Drive and Reverse and for manual duties, it comes with a Tiptronic mode. Along with this, the Gravitas will come with Terrain Response System that has three ESP terrain response modes – Normal, Rough and Wet. It also comes with cruise control.

The Gravitas comes fully loaded with the bells and whistles that are expected from a modern SUV. It gets a panoramic roof, an 8.8-inch floating touchscreen media system that offers smartphone connectivity like Android Auto and Apple CarPlay along with voice recognition system. The third row, on the other hand, gets its own dedicated air condition vents, controls for the blower, cup holders and pockets for storing mobile phones and other nik-naks for both the passengers. There's great news for music buffs as the Gravitas comes equipped with a nine set speakers system, including one woofer with an amplifier. The list doesn’t stop there as there's also a 7-inch semi-digital TFT instrument cluster with an analogue speedometer.

In terms of safety, the Gravitas gets six-airbags, including curtain airbags. It is also equipped with ESP, auto-dimming rearview mirror, hill hold control and hill descent control, cornering fog lamps and like the Hexa, it gets four-disc brakes.

The Gravitas will take on the Mahindra XUV500 and the new MG Hector Plus, which was also showcased at the Auto Expo 2020 and will be launched in the latter half of this year. The current BS6 Harrier’s price range starts from ₹13.69 lakh to ₹20.25 lakh, including manual, automatic and the Dark Edition variants. We expect the Gravitas to be price around a lakh more.