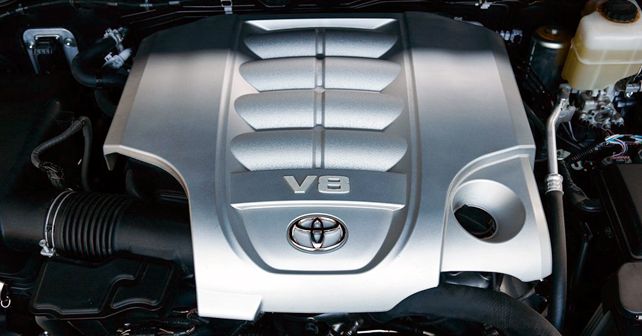 Though the news is yet to be officially confirmed by Toyota, the rumours aren't that hard to believe, given the global downsizing trend.

Yes, folks. With ever-growing online reports and, now, an anonymous informer in close connection with Toyota's US operations coming forward with more details, it seems like the days of Toyota's V8 engines are numbered. In a recent news story, it's been revealed that Toyota is planning to end the production of all its petrol & diesel V8 engines in the next two-three years.

The aforementioned informer stated that Toyota's Huntsville facility in Alabama, US (one of only two production facilities in the world that produce Toyota's V8 engines) is preparing a stockpile of about 30,000 V8 units, which should be sufficient for all V8 models that will be produced in the US in the next 12-18 months. Once the V8 units are fully manufactured, the production & assembly lines at Hunstville will then be modified to start the production of twin-turbo V6 engines – the successor to the V8.

Till the time the production line at the Alabama facility undergoes modifications, Toyota's other V8-producing plant in Tahara, Japan will continue to build V8 units to meet global demand. However, once the V6 production is in full-swing at Huntsville, the Tahara plant is also expected to undergo the same shift. The entire process could take two-three years easily.

In the US, models like the Toyota Tundra, Sequoia, and the Land Cruiser will be affected by this move. While the Land Cruiser (the most globally renowned model of the lot) gets a 5.7-litre V8 option in markets like the US, it (LC 200) was on sale in India with a 4.5-litre diesel V8. However, with the BS-VI norms in place, Toyota India has removed the LC 200 and Land Cruiser Prado from its website.

As for the twin-turbo V6, it's likely to come in hybrid form as well. With the hybrid system, the twin-turbo V6 is rumoured to churn out 295bhp & 356Nm of torque. This can only mean that the next-generation of the Land Cruiser (due to arrive sometime in 2021) will also get a hybrid derivative. The most crucial aspect for Land Cruiser fans around the world would be how Toyota manages to retain the LC's legendary off-road capability with a V6 and hybrid assistance. It seems that we'll only have to wait for the next-gen Land Cruiser's debut to find out.