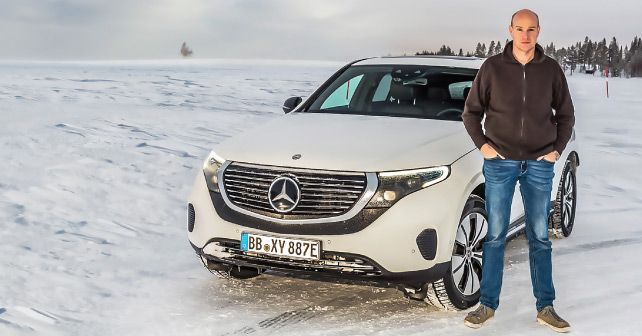 Jens heads up North to do some behind-the-scenes winter testing with Mercedes.

As if Central Europe wasn’t cold enough these days, Daimler invited me on a trip even further north. The positive, though, was that I got to try out four new models on snow and ice during their final stages of winter testing. And these models couldn’t have been more diverse.

On Day one, I got to ride along in a fully electric Mercedes-Benz. And the drive revealed some unexpected properties. Behind the wheel were executives Michael Kelz and Peter Kolb, testing the final calibration of their first dedicated electric model, the EQC 400. They were putting in work to perfect – I wouldn’t have guessed it – the EQC’s drifting capabilities.

The torque, of which there’s a full 765Nm right from the start, can be applied without delay and with the utmost precision. There are different driving modes, including Sport, which allows for some considerable drift angles. But the experience is fully transformed when ESP is turned off entirely. The driver can enter a drift with great ease and hold it perfectly.

The EQC 400 is eerily quiet, and it is quick – the asynchronous E-motors of the EQC make a full 408 horsepower, and the 0-100km/h sprint takes just 5.1 seconds. Top speed, however, is just 180km/h, and while this is sufficient in most markets, it underscores the difficulties of electric cars. So does the range – the 80kWh lithium-ion battery provides juice for 450 kilometres at most. That’s less than half of its conventionally powered siblings, and when the EQC has run out of charge, it takes considerable time to recharge. Buyers need to be acutely aware of the shortcomings of electrics.

The next morning, I switched to the GLC, and I was actually allowed to drive it myself. The ultra-successful crossover SUV gets an extensive makeover, with cosmetic changes that include a Panamericana-style grille and technical changes that encompass a number of new powertrains with 48-volt hybridisation for far greater efficiency.

Inside, the GLC gains a new MBUX user interface with TFT displays and a central touch pad that’s less practical to use but better-looking than the previous ‘cobra’ element, with its turn-and-push knob.

The engine line-up of the new GLC will comprise of four- and six-cylinder petrol and diesel engines, the ultra-powerful AMG V8 versions, and a hydrogen fuel cell version with an electric motor and a top speed of 160km/h.

The comparison between the GLC and the EQC is especially interesting, because they share the same platform and a lot of visible and invisible parts. The EQC is cleaner and more modern looking, and the interior is brimming with futuristic and expensive details that are designed to underscore its forward-looking character. And the MBUX system in the EQC, while functionally very similar, is styled like it’s a generation ahead. And, in the looks department, the EQC is certainly ahead.

On the flip side, the EQC is so low to the ground that it doesn’t qualify as an SUV – its ground clearance is just 13 centimetres. The GLC sits higher, even in standard trim, and it can be further raised with the optional air suspension that’s not available on the EQC. And the EQC is expensive too – almost as much as the ultra-quick AMG GLC 63. If you don’t like experiments, go for a petrol or diesel version.

Day three got me into a third, utterly fascinating car – a prototype of the AMG A45, the upcoming range-topper of the A-Class that we believe will make at least 420 horsepower. The rear axle is especially innovative, as it features two clutches that help distribute the torque to each rear wheel with incredible quickness. Here, again, the purpose of driving on snow and ice was perfecting its drifting performance. From the passenger seat, I believe the AMG A45 may set a new benchmark in its class.

That includes straight-line performance as well. Mated to an eight-speed dual-clutch automatic, it storms ahead like there’s no tomorrow. I can’t wait to get behind the wheel myself – the leap forward from the 306-horsepower AMG A 35 is immediately apparent. Down the road, there will be an AMG CLA 45 and an AMG GLA 45 as well, just like before – but with the new engine and chassis from the AMG A45.

As to the fourth car? I signed an agreement to keep it under the lid for another few months. Stay tuned for a vehicle that combines surprising practicality with unmistakable style. And yes, we went sideways in that, too.