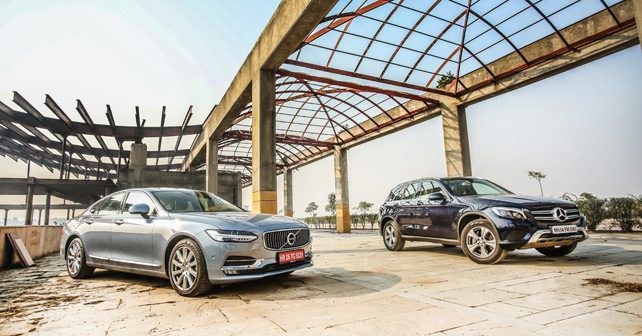 There’s a good chance that your next car will be a crossover. But what happens to the luxury stakes when you go from a sedan to an SUV? Well, we put two similarly priced luxury cars together – one sedan and the other an SUV – to find out.

I can’t remember exactly when, but sometime in the early nineties we were driving to a tea club in a Maruti Suzuki Gypsy when my dad pointed to a purple sedan heading in the same direction and said, “That car comes with air conditioning.” Now, being a young car aficionado, I was struck by both amazement and amusement. Later, when we met his friend whose car it was, I anxiously asked if I could see the ‘air-conditioner’ in the car. As he fumbled for the keys in his pocket, I attempted to peek into the cabin through the side window. But the tint was so dark that all I could see was my own nose being squished against the glass. But when he did finally open the door, I was totally disappointed!

You see, what I was expecting was a full size window AC fitted bang in the centre of the dashboard. But what this Premier 118NE had instead were fiddly little air vents much like those in a Maruti 800. Well, that’s not going to work I thought! 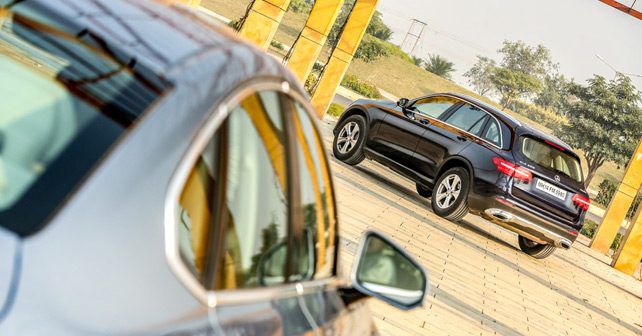 Nevertheless, peeking in through the window of a new car is always exciting – isn’t it? For me, at least, a lot of a car’s character lies in how the cabin looks and feels – its overall ambiance and the kind of equipment it has. And when it comes to this stuff, it’s invariably the luxury cars that offer the most characterful and tasteful cabins.

Talk of luxury cars invariably brings the German triumvirate of Mercedes-Benz, BMW and Audi to mind. But, of late, it’s Swedish carmaker Volvo that has pushed the envelope when it comes to the cabin of luxury cars. When I first saw the XC90 I was absolutely bowled over by its interiors. Don’t get me wrong, the exterior design of the SUV is superb too, but it’s when you get inside that you realise that the quality of the wood and leather simply puts the Germans in yesterday’s journal. And the brand new S90 sedan has only taken it a notch higher. So when we thought of comparing the levels of opulence in a sedan and an SUV, the S90 seemed the perfect contender to uphold the pride of the luxury sedan against its new-age rival. Taking the fight to the Scandinavian sedan is the latest SUV to wear the three-pointed star – the Mercedes-Benz GLC. Let’s take a peek into these two cabins, then, rest our tired souls on some meticulously chosen leather and try our hand at the very precisely engineered switchgear.

The cabin of the Mercedes is a familiar one, as a lot of switchgear and trim comes from the family parts bin. It comes upholstered in quality beige leather, while the aluminium switchgear on the centre console and doors feels like its milled from a solid block of billet aluminium. The top-half of the dashboard and door-pads are finished in black to ensure light dust settling on them doesn’t make the cabin look instantly dirty. The lower section is beige to make the cabin feel airy and premium with soft touch materials. 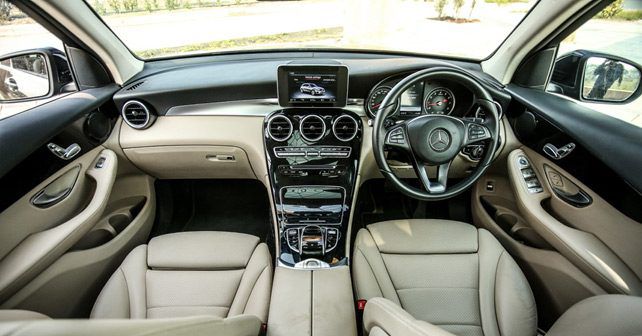 Put your hands on the wheel and they sink into the soft leather – the perforated bit where you put your hands at three and nine-o’clock is even nicer to touch. The steering mounted buttons feel well damped and even the way the horn pad depresses gives you a warm fuzzy feeling inside.

Something I really appreciate in a luxury automobile is a set of well-finished analogue dials. As you would know, the traditional Mercedes instrument cluster is quite a nice one with two simple and easy-to-read silver rimmed dials along with a large digital display that gives you all sorts of vehicle and infotainment data. Meanwhile, a center mounted infotainment screen on the dash can be controlled from a host of switchgear consisting of buttons, a dial and a touchpad placed on the center console. 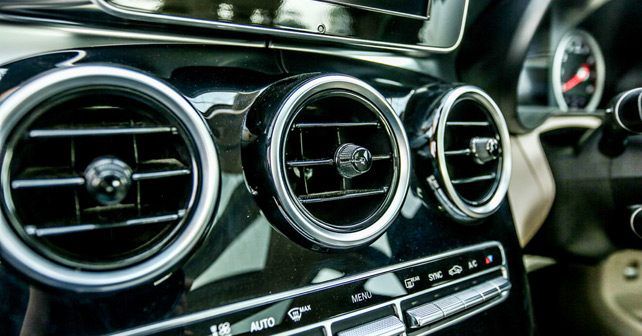 The only let down here is the piano black finished centre console trim, which looks fine but feels tacky and plasticky. The leather seats up front, though, are very comfortable indeed and the electrically adjustable bolsters ensure that you have just the right amount of back support. The rear seats would be more comfortable with a broader bench, as under thigh support could be better for taller passengers. An aspect that I really like about the back seat in the Mercedes, however, is that the dual-panel sunroof – which adds to the airy and premium appeal of the Merc. 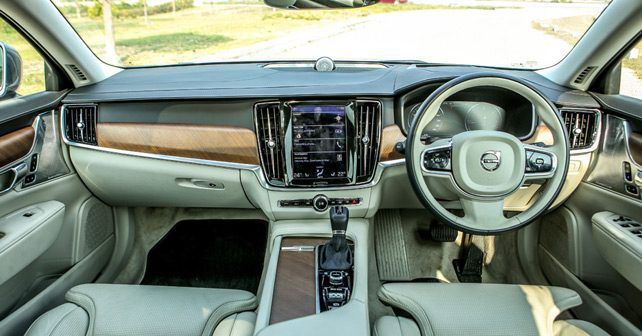 But the god honest truth is that, as I step out of the Mercedes and peek into the Volvo, I’m even more impressed. Like the XC90, the S90 is just in another league when it comes to the luxury quotient. A glimpse into the cockpit reveals three visually distinct layers, a black leather clad top section followed by a mix of light brown walnut trim and some aluminium trim in the form of air vents and casings for the Bowers and Wilkins surround sound system. Everything else in the cabin is an off-white shade – most of which is finished in supple leather. The S90’s interiors don’t just look better than the Merc’s, but it feels more modern too. Admittedly, though, it will be harder to clean. 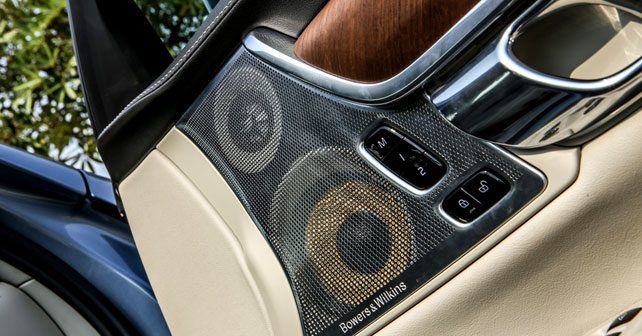 More than that, however, the huge 9-inch screen at the centre of the dash demands explanation. Volvo has gone all out in order to take a leap into the future with this interface. Everything from the air-con controls to seat heating and cooling, to sat-nav and infotainment settings are all controlled via the touchscreen. There are a grand total of just five buttons on the centre console. Undoubtedly impressive, but having to play with an ever changing digital menu while driving is a little hazardous. Basic controls, such as those for air conditioning, should have buttons and knobs to allow the driver to keep his eyes on the road. Another grouch I have with the Volvo is that the massive touchscreen shows up fingerprints very easily – which certainly diminishes its high-end appeal. So, it seems, Volvo has got the traditional concepts of luxury spot on but the new age elements need a bit of fine-tuning. 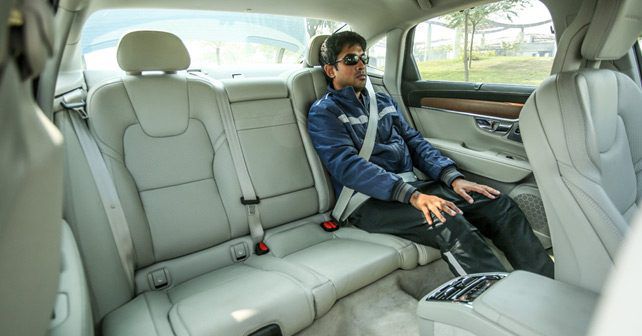 That aside, all the trim and materials inside the Volvo doesn’t just look top notch it feels it! The genuine texture of the walnut is wonderful compared to the faux wood trim found in so many cars these days. It really is a nice change. And those seats, I can’t tell you how kind they are to your back. The adjustable bolsters are considerably better than those in the Mercedes too. The rear seats of the Volvo are perfect for occupants, as they come with generous legroom and offer plenty of back and under thigh support. The cabin is actually more spacious than the GLC’s, as the S90 is a longer car. This added length also adds some quite useful luggage space in the fairly deep boot. In fact, while the GLC has a bigger boot technically, because the spare wheel won’t go under the floor the available luggage space that you’re left with for your travels is quite limited.

When on a road trip though, the real USP of the Merc truly shines through – its increased ground clearance and 4MATIC all-wheel drive system. Not only does the Merc have an impressive ride – sure the Volvo has air suspension, but the sharper bumps can filter through – but it also comes with a certain amount of go-anywhere ability while the sedan will remain confined to the city limits. Another aspect that works for this particular GLC is that it’s a petrol model, which results in a smoother powertrain and lower NVH. The S90, on the other hand, is only available with a diesel engine in India and you can always hear that oil burner under the hood. To me, this is the weakest link for the Volvo as a luxury car – which, on almost every other count, is more luxurious. 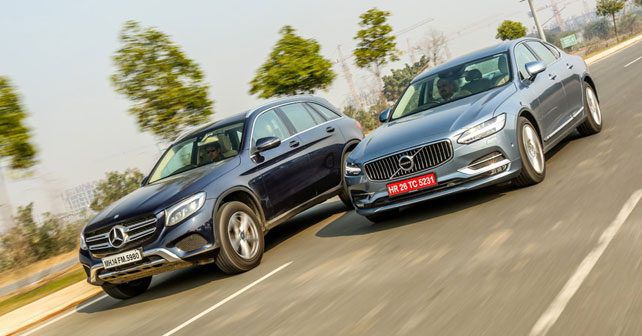 Naturally, the GLC with its more powerful 241bhp petrol engine also feels more spirited from behind the wheel. Its different driving modes are also more evident. Whereas the 190bhp oil burner in the Volvo is brisk, its three driving modes don’t radically alter throttle response. And, at three-digit speeds on the highway, the GLC certainly feels more willing to accelerate to Autobahn speeds – not that we have many such highways in India.

Drive them both into the porch of a hotel though, and it’s the Volvo that just steals the show with its long stance, Thor’s hammer headlamps, long grille and an overall unique design that overpowers even the GLC’s tall profile. Peek in through the windows too, and the Volvo will make your heart skip a beat. So, despite how good the GLC is, it wouldn’t be wise to write off the luxury sedan just yet. 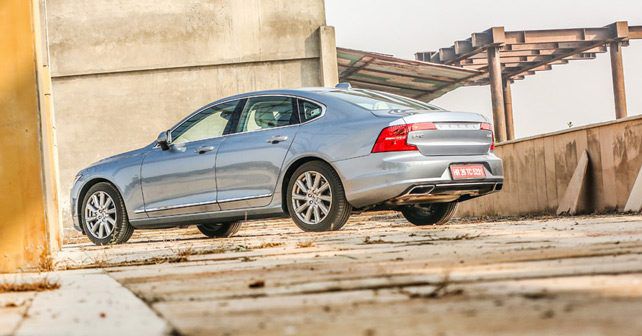 X-Factor: Go-anywhere ability thanks to its increased ride and all-wheel drive – and still every bit the luxury car.

X-Factor: As far as luxury quotient goes, the S90 feels even more opulent than some flagship sedans from rival automakers.