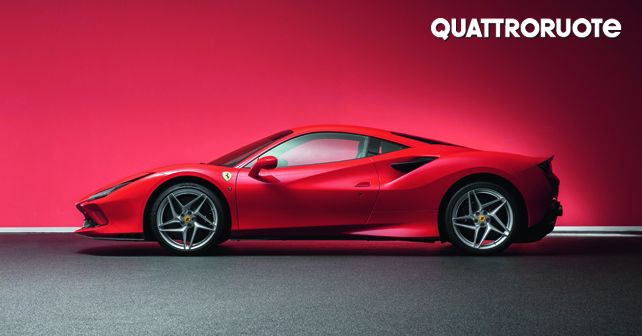 Ferrari may well be all set to go down the hybrid path, but the brand new F8 Tributo is proof that the Prancing Horse is still betting big on its raw and unadulterated V8.

The arrival of a new Ferrari is nothing short of a grand event. And, like a puzzle piece, a new Ferrari somehow always finds its perfect place within the lineup of the most famous automotive brand in the world. However, the car in question here – the F8 Tributo – does much more. First, ‘it will replace the 488 GTB,’ says Michael Hugo Leiters, the technical director of the Maranello-based manufacturer, who accompanied us in the discovery of the new Berlinetta. But what’s it all about? His answer – ‘the idea of the F8 Tributo is quite precise and definitive – to pay tribute to the engine that won the International Engine of the Year Award three years in a row.’ So, at its heart lies the same 3.9-litre, twin-turbo V8 – no surprises there! But, interestingly, in the Tributo, it’s offered in the same state of tune as that of the 488 Pista. Which, if you need reminding, is the most powerful production V8 from Maranello.

So, it’s a tribute all right, but what does the F8 Tributo mean for the brand? The answer requires us to step back and take into perspective the period into which Ferrari is moving. After the untimely demise of their Chairman and CEO, Sergio Marchione, in 2018, Ferrari entered a phase of range renewal. The brand has already announced five new models for this year, the first of which is the F8 Tributo.

Now, it would be partially inaccurate to label the F8 as the heir of the 488 Pista and completely unjustified and ungenerous to claim that it is but a mere restyling of the same. If anything, the F8 represents the continuation of what the Pista stood for – its spirit – thanks to that V8. Moreover, as already mentioned, it is the most powerful expression of Ferrari’s V8 formula.

According to Enrico Galliera, Ferrari’s sales and marketing director, ‘The F8 is the first step towards working on an evolutionary architecture to maximise the potential of the V8. Two hybrid models with a completely different positioning will soon follow.’ Louis Camilleri, the current CEO, explains that the first of the two hybrids ‘will be unveiled in May and will go on sale in 2020, and it will simply be beautiful.’ As if we expect anything less from Maranello!

Although Camilleri doesn’t explicitly say so, it is likely to be a V8 hybrid and will be positioned – both in terms of power and price – above the F8 Tributo. Based on a new hybrid architecture, it will also give way to the second hybrid model by the end of the year. One of the two will be a convertible version of the F8 Tributo, and the other should be a very powerful front-engine grand tourer.

Coming back to the F8 Tributo, it’ll be an artistic blend of aesthetics, functionality and technology. A team headed by Flavio Manzoni, senior vice president of design at Ferrari, was given the responsibility to render the requests of Leiter’s team into a captivating reality. Leiter explains – ‘The idea was to reduce drag and increase downforce (aerodynamic efficiency has been increased by 10% compared to the 488). Further, the radiator layout has been optimised, and they’re now tilted backwards, changing the air inlet flow. The F8 continues with the S-duct, but in a less extreme form than the 488 Pista. In addition, the air intake, derived from the 488 Challenge, has been shifted from the sides to the rear, which means the air flowing in is relatively cooler and follows an undisturbed path through shorter engine ducts, making the entire system more efficient.’

With the very aggressive front fascia – some claim that it looks like a shark’s nose – a prominent lower body and sleeker headlights, the F8 reserves most of its surprises at the rear end. Shedding some light on the design of the car, Flavio Manzoni says, ‘We have adopted a double taillight design – something very typical of Ferrari – and the blown spoiler system has been made even more efficient. And, then, there’s the Lexan rear window, a recommendation by Camilleri to lighten the weight of the car.’

Talking about the engine, Leiters explains, ‘We’ve used particulate filters for the first time in the F8, which is good for the environment but bad for the sound. So, to improve the soundtrack, we used a system behind the engine, which, through a membrane and a duct leads the sound directly into the cockpit, and the result is a track that is, in fact, better than the 488 GTB.’ 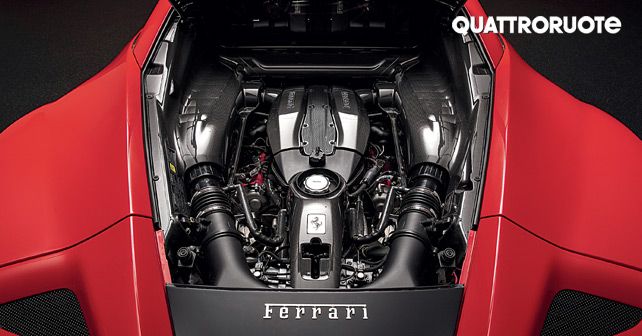 In terms of hardware, the F8 will have double-wishbone suspension at the front and a multi-link suspension at the back – both of which have been calibrated specifically, giving it a dry weight reduction of 40kgs as compared to the 488 GTB. Further, it’ll have the same seven-speed dual-clutch transmission, but it’s been tweaked and made a little sportier, enhancing both the acceleration and the sound.

The F8 now has five settings for the Manettino, along with the new FDE+ (Ferrari Dynamic Enhancer Plus). FDE is a dynamic control system that improves the car’s handling during on-the-limit driving, and the FDE+ version of the F8 works even in low-grip conditions – and remains active even in ‘Race’ mode. What does this mean? Simply put, you can now push the car harder with even greater confidence during extreme driving.

Just like any successor, the objective of the F8 Tributo is to offer a more enjoyable and better driving experience than the 488 GTB. This has been achieved through the optimisation of the engine, weight reduction and improved aerodynamic efficiency, says Ferrari. And together, all of these factors will offer excellent handling along with exceptional levels of comfort. 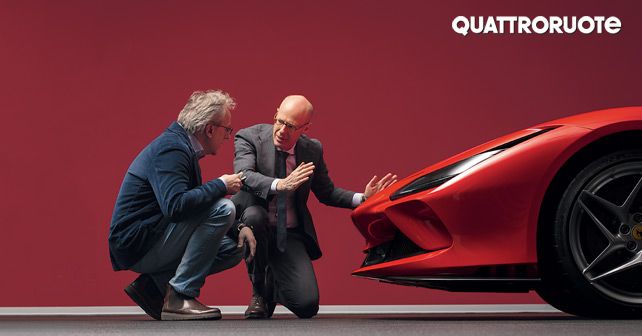 Ferrari’s technical director, Michael Hugo Leiters, talks about the functioning of the front S-duct, which is less extreme than the one on the 488 Pista. The duct enhances the airflow and diverts the air upwards towards the exit on the bonnet. The upshot is increased aerodynamic downforce. 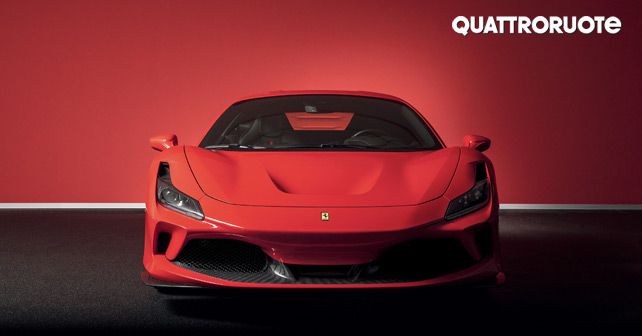 The front of the F8 is characterised by a low-slung bonnet and a prominent grille. The LED headlights (adaptive ones are optional) are more compact than those of the 488 and have brake ducts just above them. 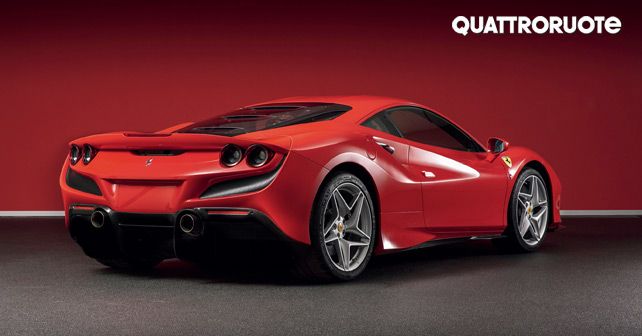 The tail of the F8 Tributo features the biggest design change, featuring twin round lamps. The centrally mounted exhaust pipes are new, and the blown spoiler system – already present on the 488 GTB – has been updated and is now made of carbon fibre. 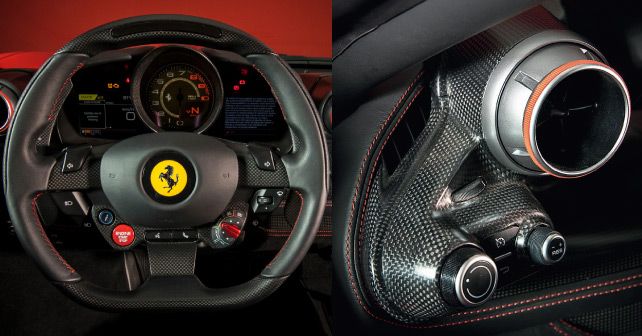 The driver’s seat maintains the same H-point — the distance between the seat and the floor of the car – as the 488 GTB, but it has been updated. Also, the steering wheel is smaller and is ergonomically more comfortable – by the way, it’s been borrowed from the GTC4 Lusso. The dashboard design has been modified, which now has new round air vents set in aluminium surrounds (also available in optional carbon fibre). A 7-inch touchscreen for the passenger is also available as an option. The anatomical seats have been revised, and the centre console is different from the one found in the 488 GTB. 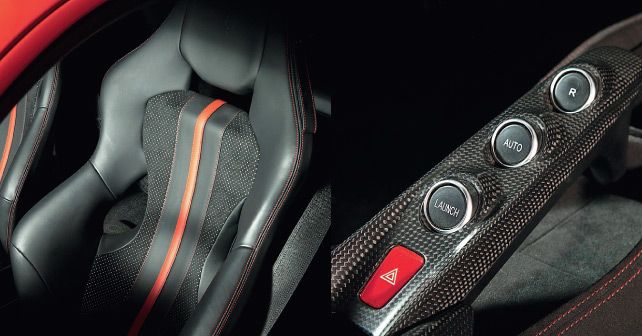