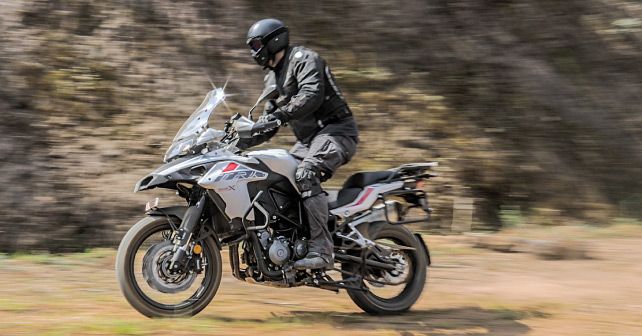 Benelli is back in India, and this time with a very interesting product – the TRK 502.

Internationally, Benelli has been around for more than 100 years – but their survival hasn’t always been easy. That being said, somehow, they always manage to keep coming back.

In India, their story is no different. When they first entered the Indian market, they tasted considerable success and managed to sell around 5,000 motorcycles. It was indeed an impressive feat, given that they didn’t really have very interesting products. It was the beautiful Italian design of their motorcycles that managed to win hearts across the country. However, owing to the fact that their Indian partners ran into legal trouble, Benelli was forced to shut their operations in 2017.

Aware that it needed to continue making progress in India, Benelli soon tied up with another partner, and the Chinese-owned Italian bikemaker is back with plans that are as ambitious as ever.

The key product
When Benelli first showcased the TRK 502 at the 2015 EICMA show, we were all very impressed with the bike. Once again, it was the big-bike Italian design that grabbed eyeballs. Now, in the last couple of years, the adventure bike space in India has gained some momentum. In fact, a big chunk of premium bikes sold in India are ADVs. Conscious of the growing popularity of the segment, Benelli has chosen the TRK 502 to make their grand re-entry into the market. 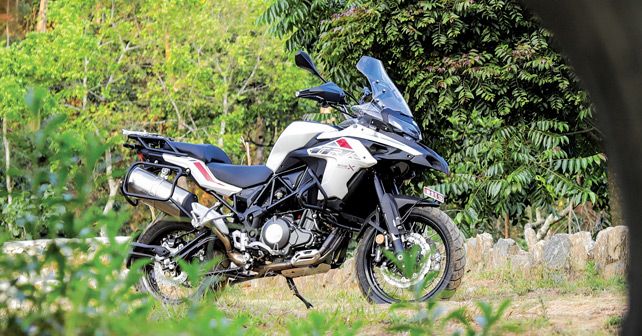 Let’s now get to the bike itself. The TRK is a middle segment ADV, but with enormous dimensions. It looks big, I mean really, really big. With a completely new design, a new frame and a brand-new engine, the TRK 502 is the Italian bikemaker’s new hope for the Indian market. The TRK 502 has been launched in two variants – the first is the base 502 and the other is the off-road centric 502X. Another highlight of the bike – which has, in fact, become a talking point – is its competitive price tag of just `5 lakh! We spent an entire day in the jungles of Karnataka to experience these new machines and see just what they have to offer at such an amazing price.

Italian design
In terms of design, the TRK 502 looks really good. And, like I said before, it looks like a proper big bike. The front section has nice LEDs, and the headlight design, as well as the front beak, looks very similar to the Ducati Multistrada. The fuel tank is a massive 20-litre unit, and the cowlings give the bike a very muscular appearance. It gets wide upside-down forks at the front and a hydraulic mono-shock at the rear. For stopping duties, it has dual 320mm discs on a 17-inch alloy at the front and a single 260mm at the rear, also a 17-inch alloy. At 800mm, the seat height is low. The bike has a ground clearance of 180mm. With great character and pleasing aesthetics, it’ll certainly make its presence felt on the road. 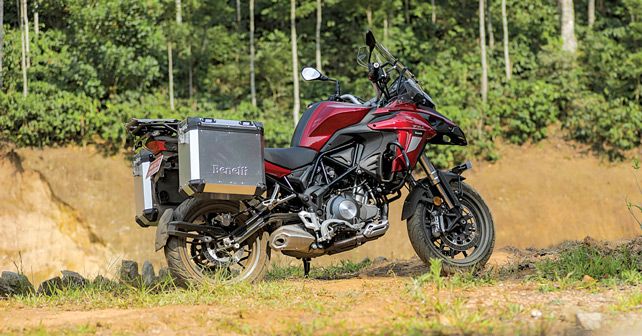 For everyone
The TRK 502 is by no means a light bike, for it weighs 220 kilogrammes. But that doesn’t mean that it’s difficult to ride. What makes riding this bike easy is its brand new 500cc, in-line, twin-cylinder liquid-cooled engine that pumps out 47bhp and 46Nm of torque. This is usable power, so you can extract all the juice out of this engine without worrying about your head being ripped off when you dip into the throttle.

The throttle itself is nice and light, and delivers linear acceleration. It will, of course, feel sluggish if you’re used to riding bigger bikes, but if you’re a novice it offers more than enough juice to have some fun with.

In terms of refinement, there’s hardly anything to complain about. The engine feels smooth and composed at all times, even when you rev it hard. The steering is also pretty light, and once you get moving, it’s easily manageable on the road. The suspension setup is a little on the stiff side, but it absorbs almost everything – never allowing you to feel even the slightest bit of discomfort.

The Pirelli tyres offer great grip, adding to the overall balance of the bike, which is quite good. Although it’s a fun motorcycle to flick around, it lacks exhilaration in terms of performance. However, a lot of people will really like its exhaust note, which almost makes the bike sound like a triple instead of a twin. 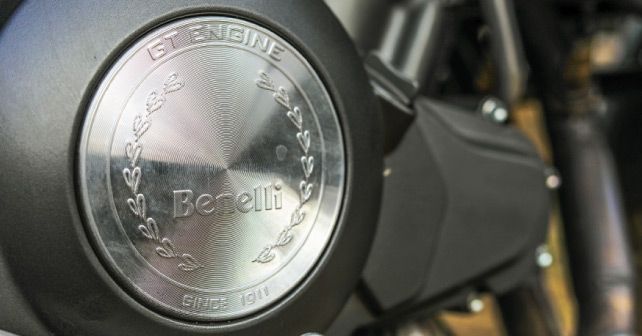 No road? No problem!
If you’re an avid off-roader, then the bike you should go for is the 502X. This variant has a lot of things that make it more off-road oriented. First, it’s got a much higher ground clearance of 210mm. It also has a raised seat height at 840mm, along with increased suspension travel. Moreover, it also gets a larger 19-inch wheel at the front, and both alloys are replaced by spokes. Add to the list an engine bash plate, knuckle guards, floating callipers and an upswept exhaust. Plus, there are Metzelers that offer better grip in the rough stuff.

All these changes really make the 502X a pretty capable off-road machine that almost anyone will find comfortable to ride. Shorter riders, however, may struggle in tight situations because of the high seat. The gear ratios of the 6-speed transmission are a little tall, which means that you may find yourself downshifting frequently – a practice that some may find annoying.

The ABS is also switchable, so you can opt for greater control. Another feature that might annoy riders is the design of the fuel tank, which doesn’t allow you to grab the tank with your knees. So, it can be a little awkward to stand up on the foot pegs when riding on rough off-road sections.

Value for money
Both bikes are great for people who are looking to upgrade to a big adventure motorcycle. At a starting price of `5 lakh, you really can’t ask for more. You get great features and some decent technology. There is also a USB input placed cleverly on the fuel tank for any device you might want to place on the handlebar. Of course, there aren’t any riding modes or other fancy electronics, but you do get a basic motorcycle that is big and fun. A lot of people will complain about the lack of power, but if you’re looking for an easy rider that looks menacing and is comfortable, capable and features good quality components, then the TRK 502 could be the perfect motorcycle for you. 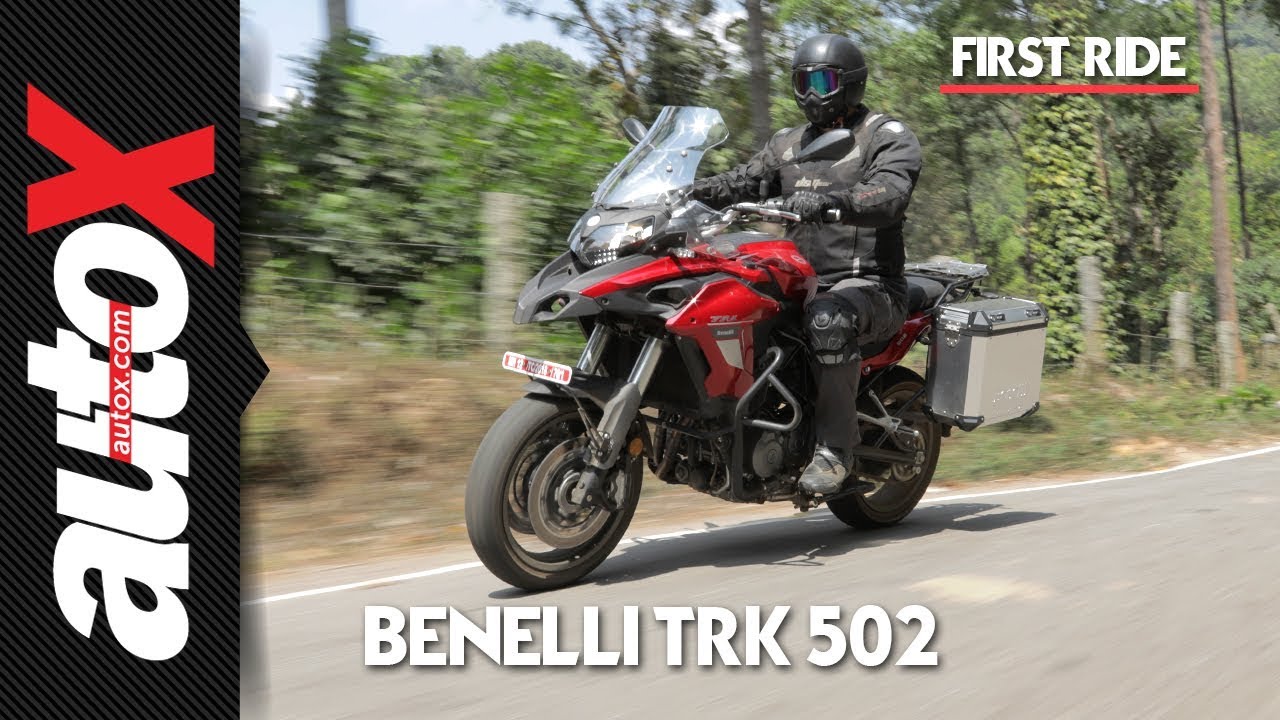 X-Factor: An affordable, easy-to-ride ADV that looks like a beast on the road. 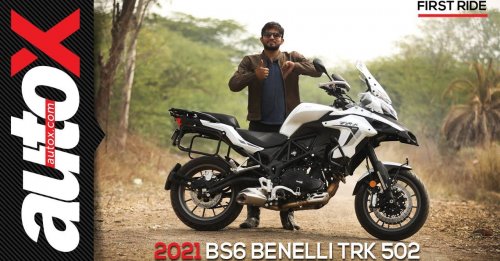 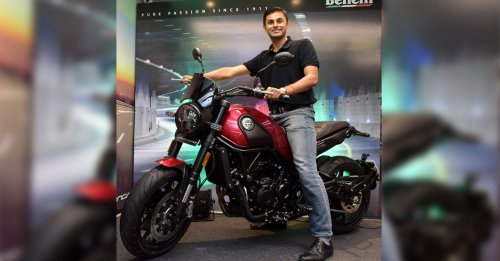