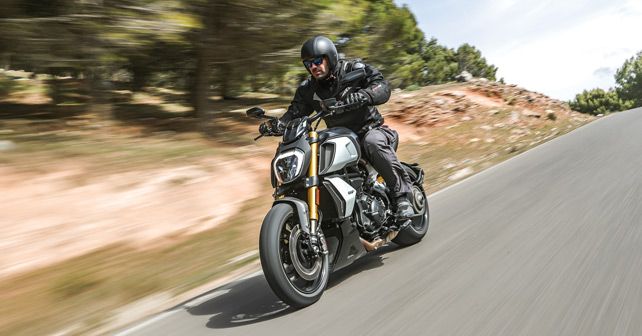 Inspired by muscle cars and superheroes, the new Ducati Diavel 1260 is the type of motorcycle that defies classification.

There’s nothing out there quite like the Diavel. There simply isn’t! I mean, where else will you find a mix of a superbike, a naked sport bike and a cruiser? The designers from Ducati wanted to disrupt convention, and it seems that they’ve done a pretty good job of it.
Off the top of my head, I can’t think of any other motorcycle on the market today that’s a direct competitor to this radical looking machine. Let’s put it like this, if there’s one bike that comes close to being a Batmobile – you know, what Batman rides – it’s undoubtedly the Diavel.

The new Diavel 1260 doesn’t fall into a particular category. It has, in fact, created a category of its own. The bike was launched a few months ago, and we were invited to Spain to ride this massive super naked cruiser. 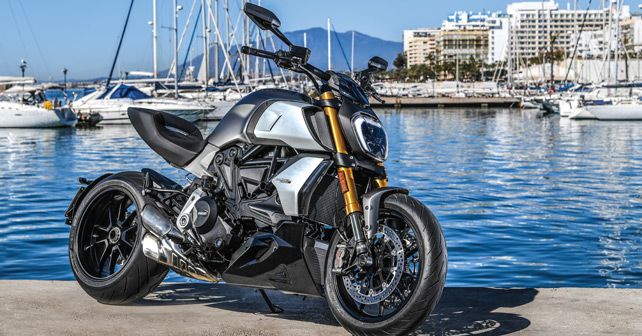 Suited up
The new Diavel 1260 is not just a facelift, it’s an entirely new motorcycle. The entire bike has been redesigned to provide a more neutral riding position. The seating position is not as sporty as the Monster, and is less cruiser-like than the XDiavel. The saddle is now wider, and the pegs are set further back. The front fork rake angle has also been decreased by 1-degree, to 27-degrees now.

The side and underbelly of the bike have the fairings of a superbike. The front forks, headlight, sharp fuel tank and forward engine position exhibit – rather proudly, I must add – its naked sport influence. Its cruiser influence is evident in the long body, wide air-inlets and seat that’s 780mm high – or ‘low’ I should say. With a fat 240mm rear tyre on a 17-inch rim, clinging on to a nicely designed single-sided swingarm, the Diavel is dressed to demand attention. I just wish it came in red. 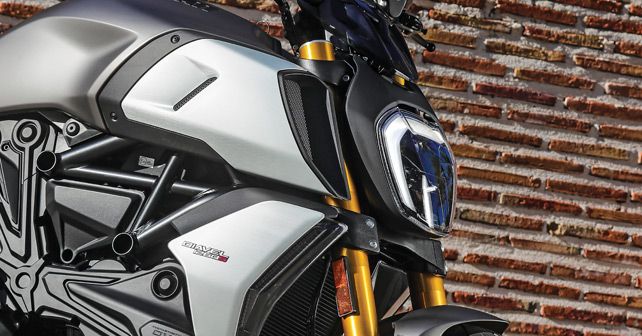 Gadgetry
The Diavel 1260 comes with some amazing features, making it the most high-tech cruiser supersport machine out there. It has Ducati digital control options, two processors and multiple sensors on the wheels, engine and brakes. It also gets a six-axis Inertial Measurement Unit, and let’s not forget about Ducati’s DQS clutchless shifting, ride-by-wire throttle, adjustable cornering ABS, wheelie control and traction control. The beautiful digital instrument cluster allows you to toggle through different menus and choose between the three pre-set rider modes – Sport, Touring and Urban.

Superpowers
The Diavel 1260 comes with a newly designed 1,262cc, twin-cylinder desmodromic engine with Ducati Testastretta DVT. The engine produces 159bhp and 129Nm of torque, and feels much more refined than before. The power delivery is instant. The torque delivery is extremely linear at low revs and kicks in at higher revs too, just like in a sports bike.

The new two-tailpipe, chambered 2-in-1 unit, also sounds nice and throaty, but it doesn’t thump like a cruiser. The engine is mated to a 6-speed gearbox that works pretty well. When we started the day, we rode through urban areas, and I was really impressed with how tame and comfortable the bike felt. In Urban mode, the throttle isn’t very responsive, and the riding position and ergonomics of the bike are a very good mix of sportiness and cruiser comfort. 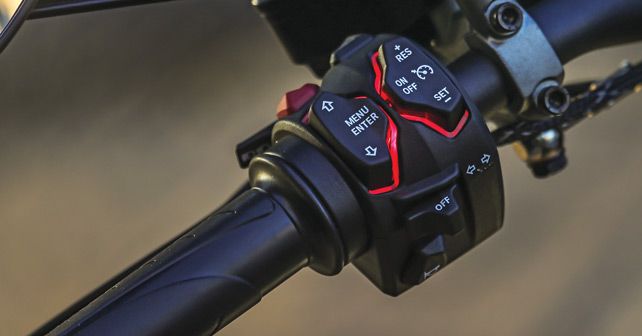 Despite its burly appearance, the handlebar position and the low seat make the bike very easy to handle. As we started to cruise along the Mediterranean coast, the Diavel began to feel less like a 159bhp sport bike and more like a laidback cruiser. While your posture and hand positioning is upright for touring, the rear-set pegs bring your feet under your thighs, adding a dash of sportiness to your stance.
As we rode into to the hills, I switched the bike into Sport mode and the engine and throttle became sharper. After hitting the first few corners, I quickly realised that the Diavel 1260 doesn’t have the sluggish cornering dynamics of most cruisers. The 1260 we were riding had Ohlins suspension. So, the direction changes were quick and the steering made the bike feel quite agile. As the ride became more technical, I began to see just how much fun this bike can actually be.

The power delivery was incredibly refined, and the torque felt robust through the entire rev range. Pulling out of corners in any gear was a breeze.

The handling of the 1260 is shockingly direct for a big bike, especially one that has a massive rear tyre. Pirelli did a great job creating this Diablo Rosso III tyre, for it makes the bike feel stable on the open road, and it doesn’t hamper its cornering ability in the twisty sections – not even slightly. 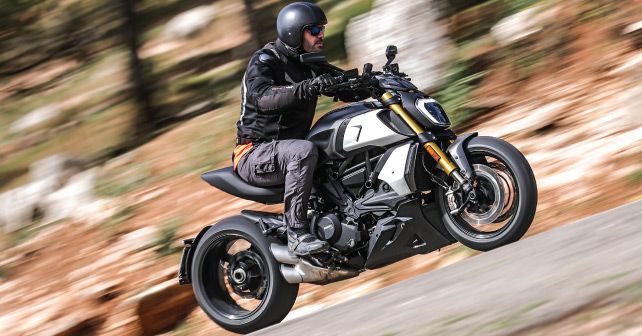 The 48mm Ohlins are adjustable and they really make the front-end feel nice and planted while cornering. What also helps is the wonderful seating position. Thanks to the fuel tank and the saddle, it really allows you to get into a more aggressive position to get a much better feel for the bike.

Verdict
There’s nothing out there that looks this good and, at the same time, gives you comfortable highway touring and sport-bike-like nimbleness. It’s true that it doesn’t allow you to attack corners as aggressively as your superbike buddies, but you’ll be able to keep up with them easily.

However, if your riding friends are conventional cruisers, you can easily outgun them any time you want. The new Diavel 1260 surpasses the abilities of the previous Diavel, and it offers the best of both worlds. Thanks to its wonderful riding position and forgiving engine, almost anyone will be able to ride this bike and have fun. There are simply no drawbacks or faults with this bike. It’s been designed, rather successfully, to offer riders a diverse – and very enjoyable – riding experience. 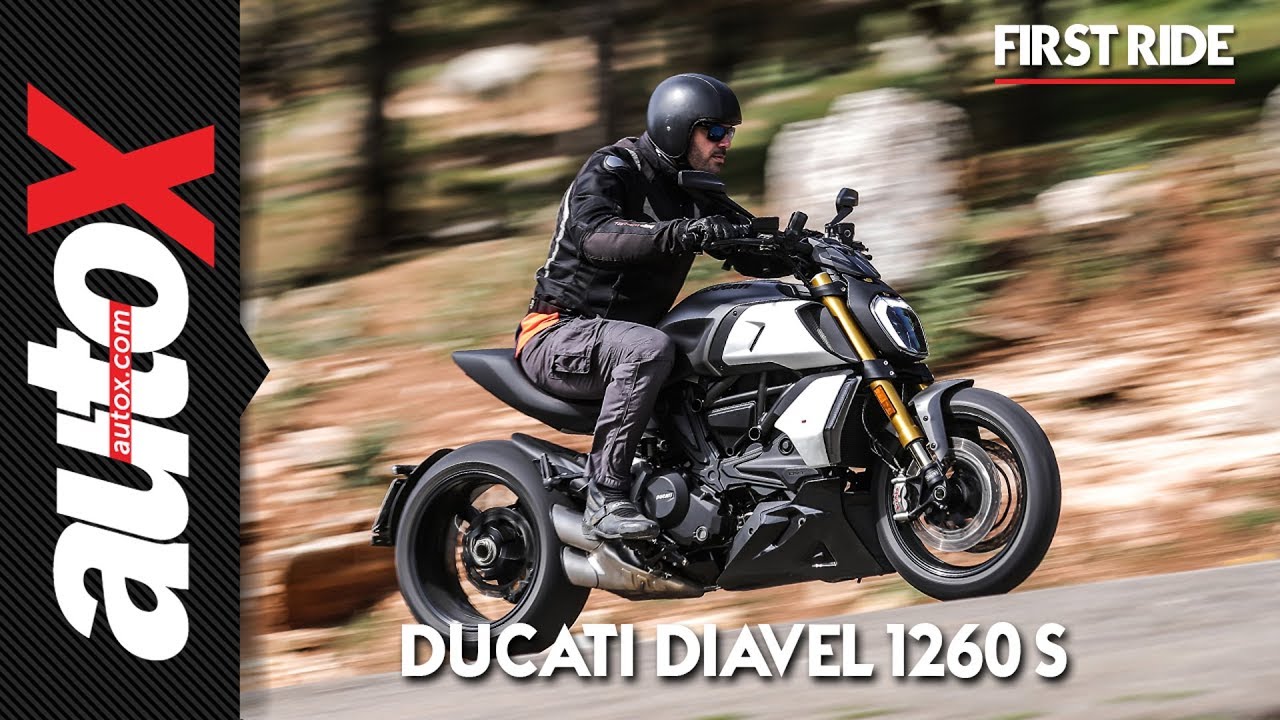 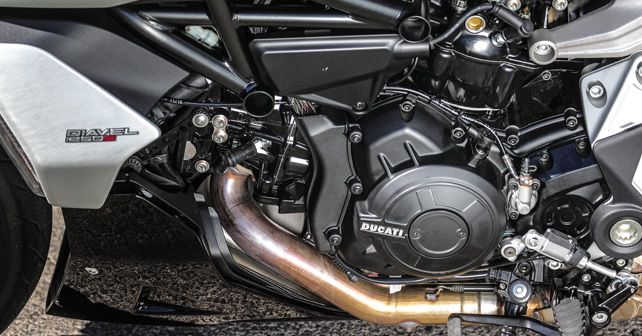 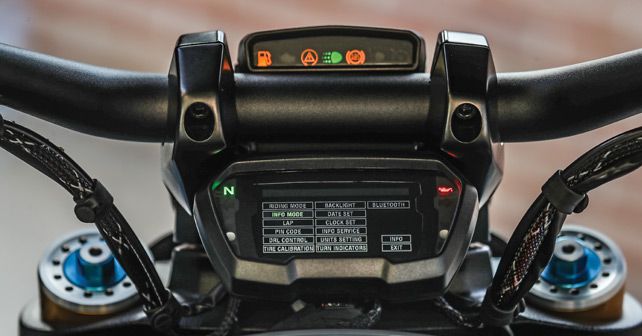 The beautiful digital instrument cluster allows you to toggle through different menus and choose between the three pre-set rider modes – Sport, Touring and Urban.

X-Factor: The comfort of a cruiser, with the riding dynamics of a super-sport.