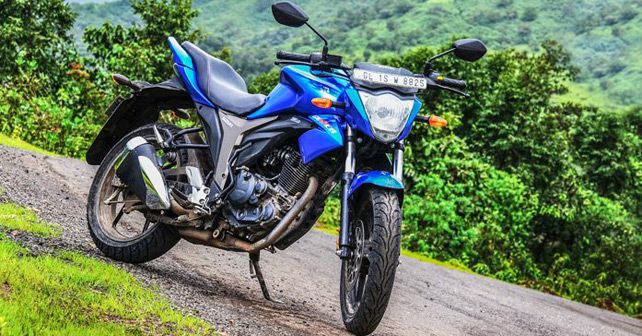 Suzuki makes its presence felt in the 150cc segment with a brand new Gixxer. The question is, can this bike live up to its illustrious name? So we did the Suzuki Gixxer to find out if it lives up to the reputation of its name.

Drenched to the bone, cursing the weather gods, and the start-stop traffic – all of which was making the mood quite gloomy indeed! Unfortunately, this was how my Suzuki Gixxer ride started. At the risk of sounding cliché, the only silver lining I could think of was the winding road waiting for me as we headed up to the hill town of Lavasa.

This new 155cc bike, or as the Japanese bike-maker refers to it, ‘street sport’ motorcycle, was the centre of attention for most of the passer-by’s on the road. The beautifully sculpted 12-litre tank, with its angular and bold side cladding design, made the Suzuki Gixxer look straight out of a Manga Japanese graphic novel. The dummy tank extensions increased its style quotient further by making it look edgier than any other bike in its class. Being a naked bike, the Suzuki Gixxer has no unnecessary fairings – and the slightly angled, yet perfectly contoured seat, made it appear like a Cheshire cat ready to pounce. At a glance, the saddle looks slightly small but it is very comfortable for the rider. It’s mesmerising even from the rear – the body coloured grab rails, like the ones in the Yamaha R15, are tucked in smartly beside the seat. The icing on the cake comes in the form of the LED tail lamps. But Suzuki’s masterstroke is the dual muffler in chrome – which showcases the sporty heritage of the GSX-R Series. The digital LCD instrument cluster mirrors a smart phone. It comes with two trip modes, a fuel gauge, clock, and even a redline indicator. 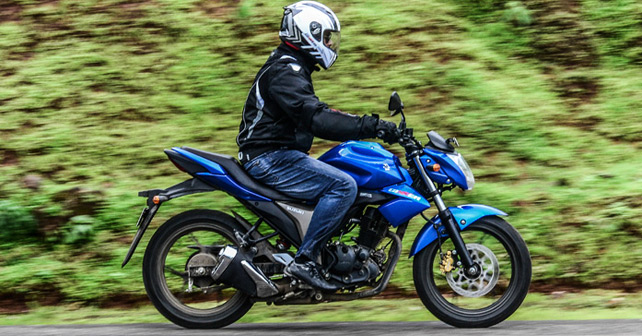 What was fun to see was the disbelief in people’s eyes that Suzuki could actually come up with such a spectacular looking bike. Before I could exit the highway and the head for the hills, I had to stop many times to answer a volley of questions – how much, how does it ride, is it powerful enough? But not once did anyone ask, ‘kitna deti hai’? This gave us a glimpse into how buyers have matured, and how they’re now focused on other features apart from just fuel economy. But, just for the record, the Suzuki Gixxer claims a segment leading mileage of 63.5km/l. In real world conditions, it should be in the mid-50’s – which is very respectable.

Getting back to my plight of being stuck in slow moving traffic – I realised how well the beefed up 41mm front forks and the seven way adjustable rear mono shock carpeted the broken road. During our Suzuki Gixxer, I also realised how the bike also spared my back from a bone jarring experience by not crashing into potholes.

Timing is everything, and, as I finally reached the ghat roads, the clouds too took pity on me and the downpour settled into a light drizzle. In terms of engine refinement, Suzuki has done a marvellous job – and an audible macho grunt complements its sporty image. The Suzuki Gixxer’s initial response is linear in nature, which is ideal for city conditions, but leaves you wanting more power in the hills. At mid-range, the bike cruises smoothly – but beyond this the power tends to simmer down, which could be the reason why it’s fuel-efficient. But, honestly, being predominately a city bike, 14.5bhp provides more than enough power. And, even when pushed to the limit, the engine never plays an off-tune hum. The Suzuki Gixxer continues to be a smooth operator thanks to its sleek 5-speed gearbox, which is very precise, and finding neutral is always just a click away. 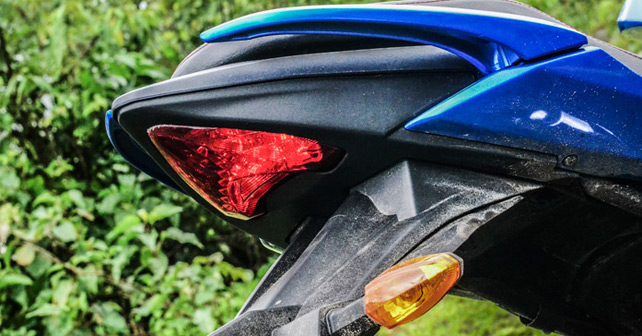 With wide and virtually empty roads, I couldn’t resist taking on the swooping turns and the Suzuki Gixxer happily obliged. It never twitched nervously, and always held its line. Keep in mind that the tarmac was wet, but this is where the 17-inch MRF tyres flexed their muscles and provided excellent traction – which allowed me to continue to attack the curves without ever second guessing the bike.

During our Suzuki Gixxer 150, the bike certainly made us believe that it can be a genuine all-rounder in the 150cc segment. There’s more to it than just its radical looks – its razor sharp handling will be pure joy for enthusiasts. Another important feature is the lack of energy sapping body vibrations, even when rev needle hovers in between 7000-8000rpm, which speaks volumes about its build quality. What makes it even more desirable is that it won’t burn a hole in your pocket either. The only hitch, then, is it’s lack of instant pick up – initially at least, the engine feels like its operating under a child lock. After spending some good time doing the Suzuki Gixxer 150, we must say that the bike is undoubtedly Suzuki’s finest effort in India – and since  it’s relatively affordable, at  Rs. 72,199 (ex-showroom Delhi), it opens up GSX-R dreams for many…

Please comment below and let us know if you liked our Suzuki Gixxer 150. Any suggestions and feedback is welcome too.