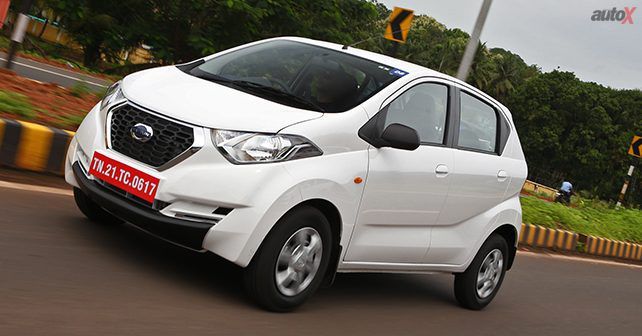 A year ago Datsun decided to shake up the entry-level hatchback market by introducing the redi-GO. Even though it was based on the Renault Kwid, the redi-GO is a completely different vehicle when compared to its French cousin. Actually, the Japanese car manufacturer preferred to call it an urban crossover because of its tall stance and impressive 185mm of ground clearance, which dwarfs some pseudo SUVs in the market. Datsun did manage to taste some success with the redi-GO and the redi-GO Sport, but apart from niggling issues like fit-and-finish and quality, its Achilles heel was the 53bhp 800cc engine. The problem was that under 2,500rpm, the redi-GO refused to offer any power. Datsun have decided to fix this issue by plonking a 999cc engine under the hood that boasts of 67bhp. So is this heart transplant the solution for all redi-GO’s problems? We find out on the winding roads of, you’ve guessed it right, in Goa. 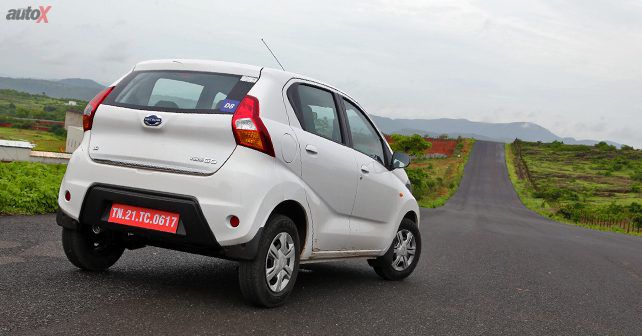 The drive route Datsun had planned out included ghat roads, broken tarmac, tight corners and of course, crowded slow moving traffic. They had virtually left no stone unturned ensuring that the redi-GO 1-litre was driven on real-world road conditions. So hats off to Datsun for being confident about its product. Without wasting any time, we fired up the 999cc and to our disappointment, the NVH level still remained quite high. The rough sound was very audible and even though Datsun insisted that they have worked on the engine noise, unfortunately, we felt a lot more work’s needed. I decided to give them the benefit of doubt as one faux pas can’t really sum up the fate of the car. After slotting the transmission stick into first gear, the redi-GO moved with a bit a spunk as compared to its 800cc variant. The 999cc did show a lot of more promise, especially when it was driven within 2,500rpm mark, which made it easy to coast within the city limits. The increase of torque from 72Nm to 91Nm was quite evident and ensured driving at slow speeds wasn’t a struggle for the redi-GO anymore. Mind you, with four adults in the car and the 222 litres of boot space completely packed with luggage, the Redi-GO still managed to build speed up at a reasonable pace. What impressed us was its turning radius which allowed us to easily take U-turns in the middle of the city and we didn’t even hold up the traffic.

We were quite impressed by the new engine till we entered the narrow winding roads of Chorla Ghat which threw a couple of curveballs at the redi-GO. As mentioned earlier with four adults in the car, the Datsun struggled to climb uphill. From fourth gear, we had to shift all the way down to second and that too we had to ensure that the rpm needle didn’t drift below the 2,000rpm mark otherwise we would have had to drop another gear. This was very disappointing as the old Maruti Suzuki 800 would easily climb up inclines without huffing and puffing for power. Also when it comes to handling, one should take it easy on corners as the body roll is quite evident. Now the redi-GO may not feel as planted as the Kwid, but the soft suspension certainly makes it practical when it is bombarded with potholes and broken roads.  It manages to provide a comfortable ride. 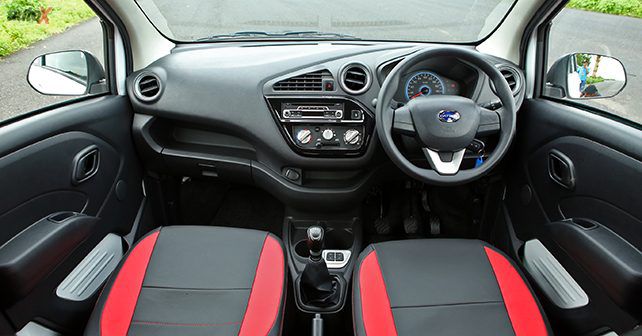 Coming to the interiors and we love the new all black look. It certainly feels one notch above the redi-GO 800cc’s dull grey cabin. What was disappointing to see is that you can still see the metal sheets of the door panels and the C-pillar. Honestly, this makes it feel very cheap. The redi-GO comes with a traditional looking stereo system, which is functional, but I personally felt that Datsun could have taken a leaf out of the Kwid’s book and could have installed a touchscreen display infotainment. 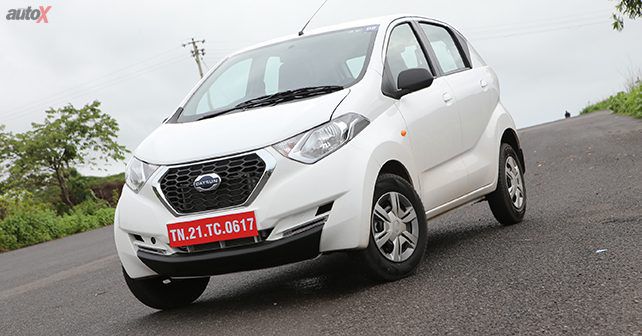 The new 1-litre engine certainly gives the redi-GO a much-needed power boost for city driving. It was a bit of damp squib in the hills, but it's still manageable once it's in second gear. In terms of practicality, it has many strong suits like a spacious cabin, ground clearance and comfortable ride quality. Unfortunately, it is still plagued with many shortfalls like the build quality, handling and metal sheets remain visible in the cabin. The redi-GO is touted to be one of the most affordable 1-litre hatchbacks in the market. We shall soon know the answer to this as Datsun will launch the redi-GO 1-litre on July 26th.