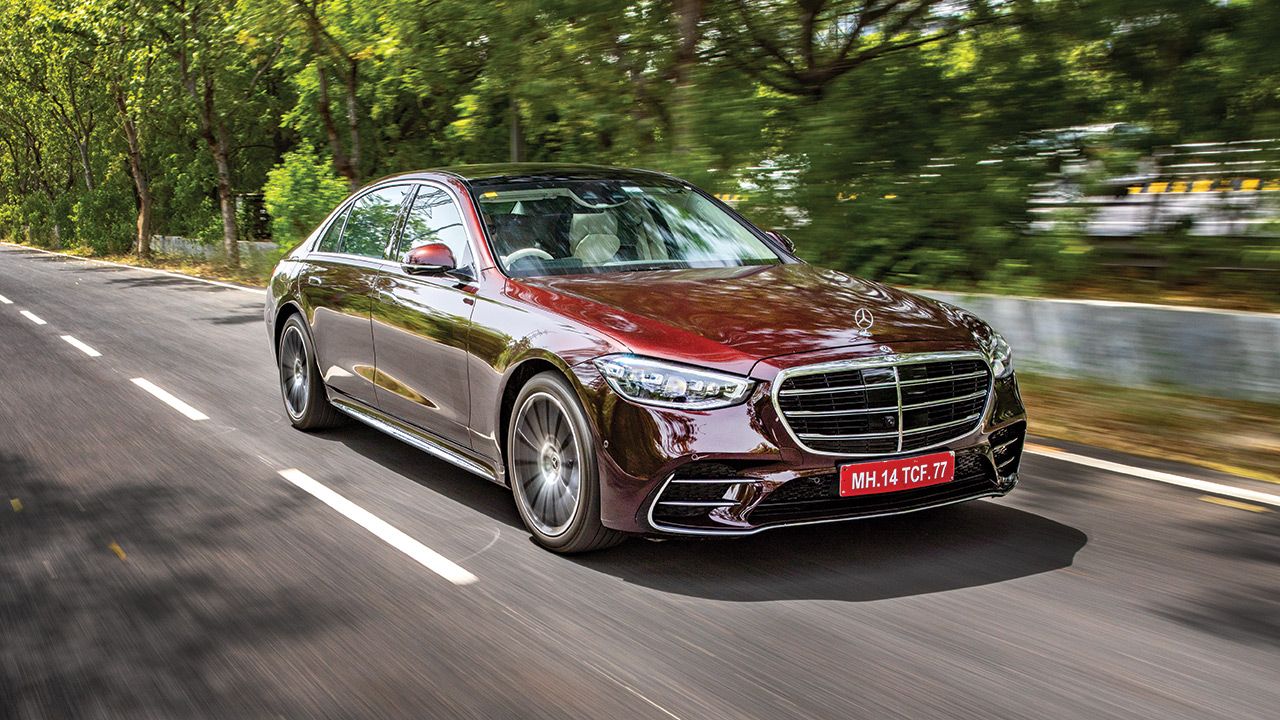 Now, over the years, the S has successfully shouldered another responsibility – that of being a vehicle for showcasing future technologies. For example, the first production vehicle to be equipped with electronic ABS was the W116 S-Class, way back in 1978. Of course, technology has been moving at a frantic pace in the past few decades, and with the new generation of the S, Mercedes is once again looking to take the benchmark in the luxury sedan segment to an all-new high. 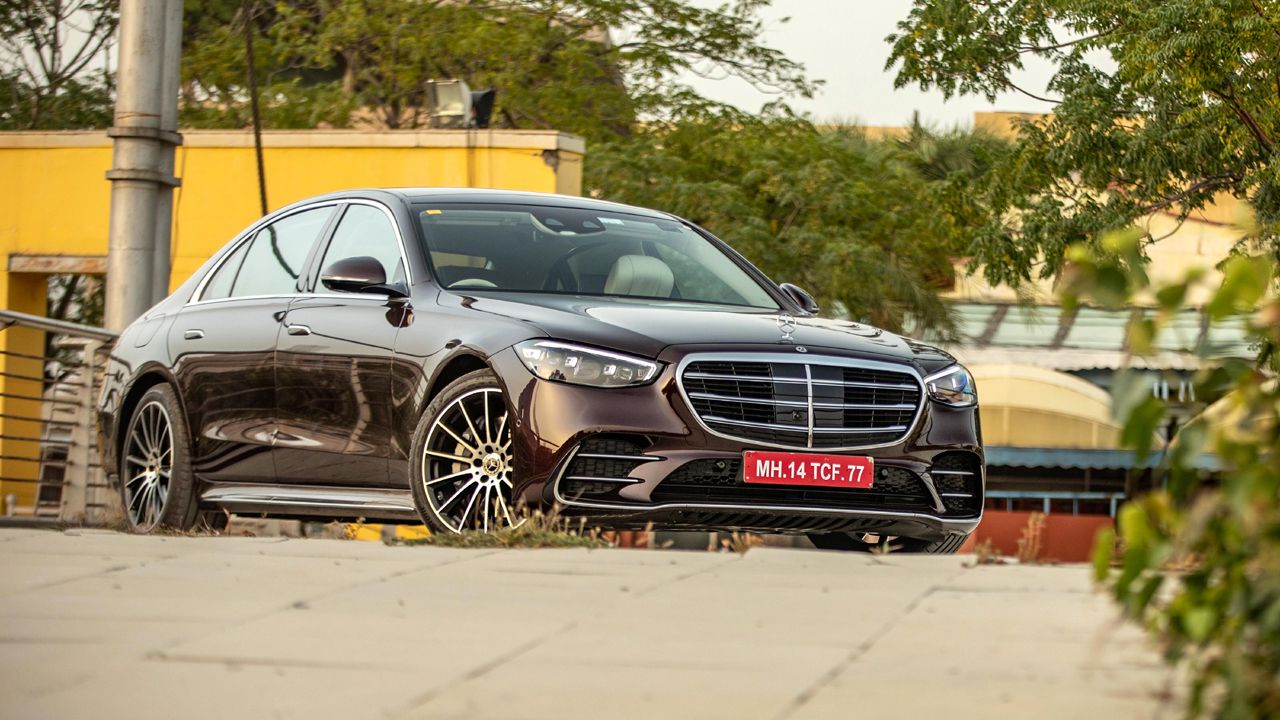 Now, with the title of the ‘best luxury sedan in the world’ and the promise of the latest tech and unparalleled prestige come high expectations. This brings us to a simple but important question – does the new S-Class live up to the expectations?

Compared to the past two generations of the S-Class, the new W223 makes a significant leap in terms of design. While the new design is still an evolved version of Mercedes’ current design language, it nonetheless makes the new S look more chiselled and lean, thanks to the sharper lines.

In profile, the sharp sides and swooping roofline give the S a sense of elegance. The front is dominated by a large chrome grille, with the three-pointed star sitting proudly on the bonnet. The large headlamps are nicely shaped and sport an angular design, which gives the car an aerodynamic look.

Interestingly, all the launch edition versions of the S are CBUs and come equipped with an AMG body kit and AMG wheels as standard. All this, obviously, influences the S’ appearance – the large air dam and chrome highlights, which are tastefully done, give the front a very imposing look. The multi-spoke wheels also look superb and give the S a very balanced stance. 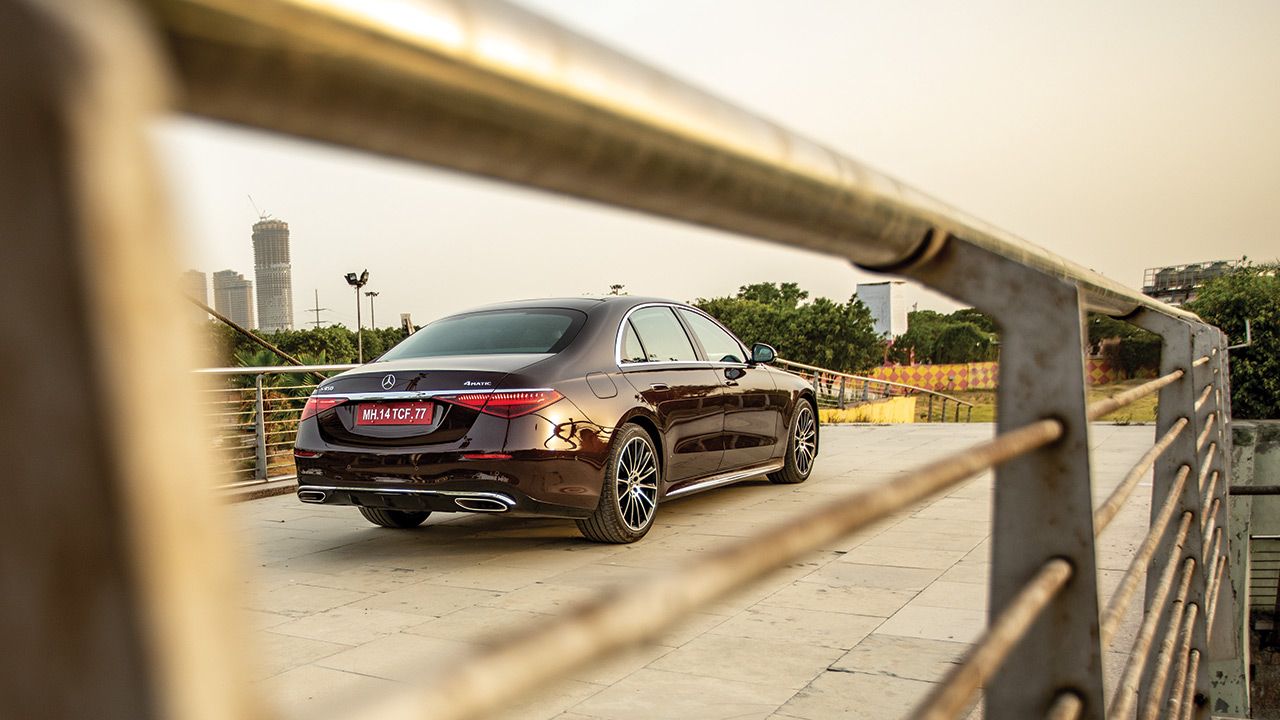 The rear is dominated by a large chrome strip that sits horizontally across the width, while large triangular taillights – all-LED, of course – with spectacular details further embellish the rear. Another highlight of the exterior is the flush door handles, which are now recessed into the doors; however, as soon as you approach the car with the key, they smoothly slide out – very slick, indeed! Overall, the new S looks very sharp and slimmer than the slightly bulbous appearance of the older-generation cars and has a very imposing presence on the road.

While the new S’ exterior design has been updated, there are no surprises there. In other words, the exterior design update doesn’t bring anything revolutionary. But all that changes the moment you enter the car, for it’s in the interior that the incredible futuristic transformation of the new S really lies.

The first thing that grabs your attention is the massive 12.8-inch multimedia touchscreen, mounted bang in the middle of the massive dashboard. It truly looks brilliant. Since it’s an OLED screen, its resolution is unmatched, and, of course, the size also helps. Given the massive size of the screen, most traditional buttons and controls no longer exist in the S, as most functions are controlled via the touchscreen. A small range of physical buttons do exist at the bottom of the screen, but they only control a few functions. 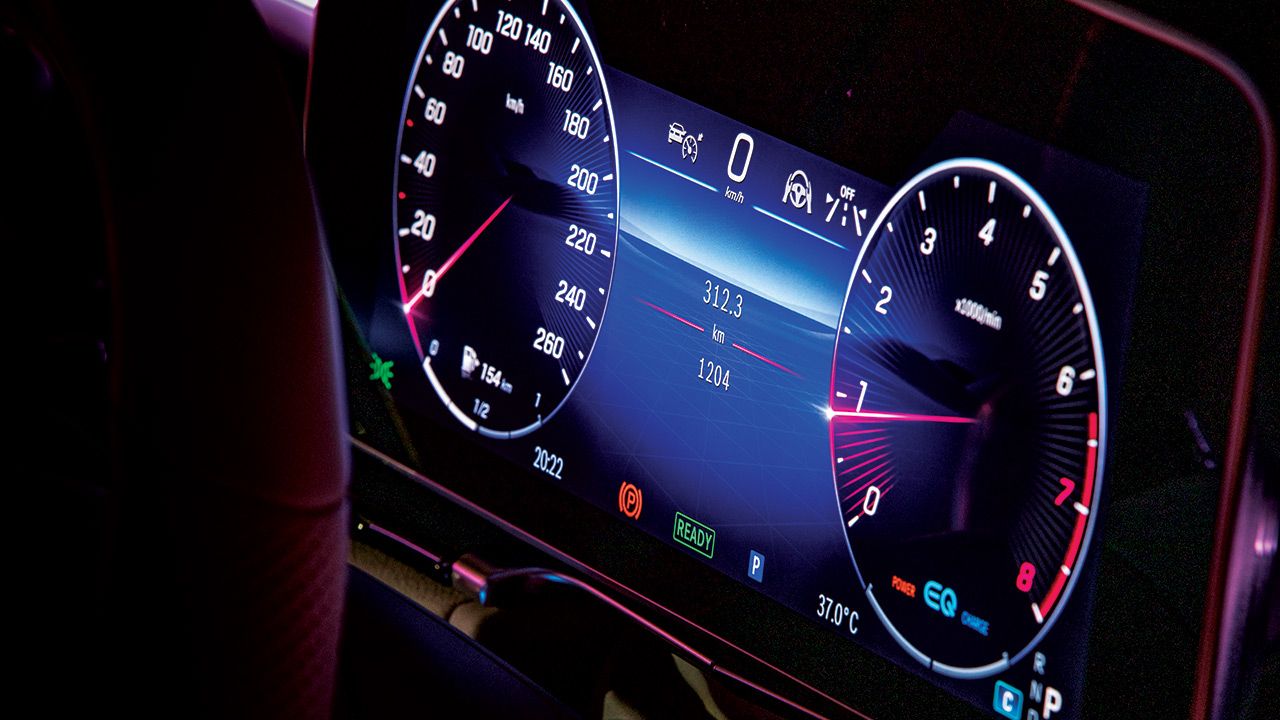 A 12.3-inch display for the instrument cluster faces the driver, which is also the first 3D display of its kind. Of course, you do get an option to choose between multiple types of screens with brilliant resolution. Now, I tried to use the instrument cluster in 3D mode, and while the artificial depth was impressive, it gave me a headache, just like I get a headache every time I try to watch a 3D movie in a cinema. 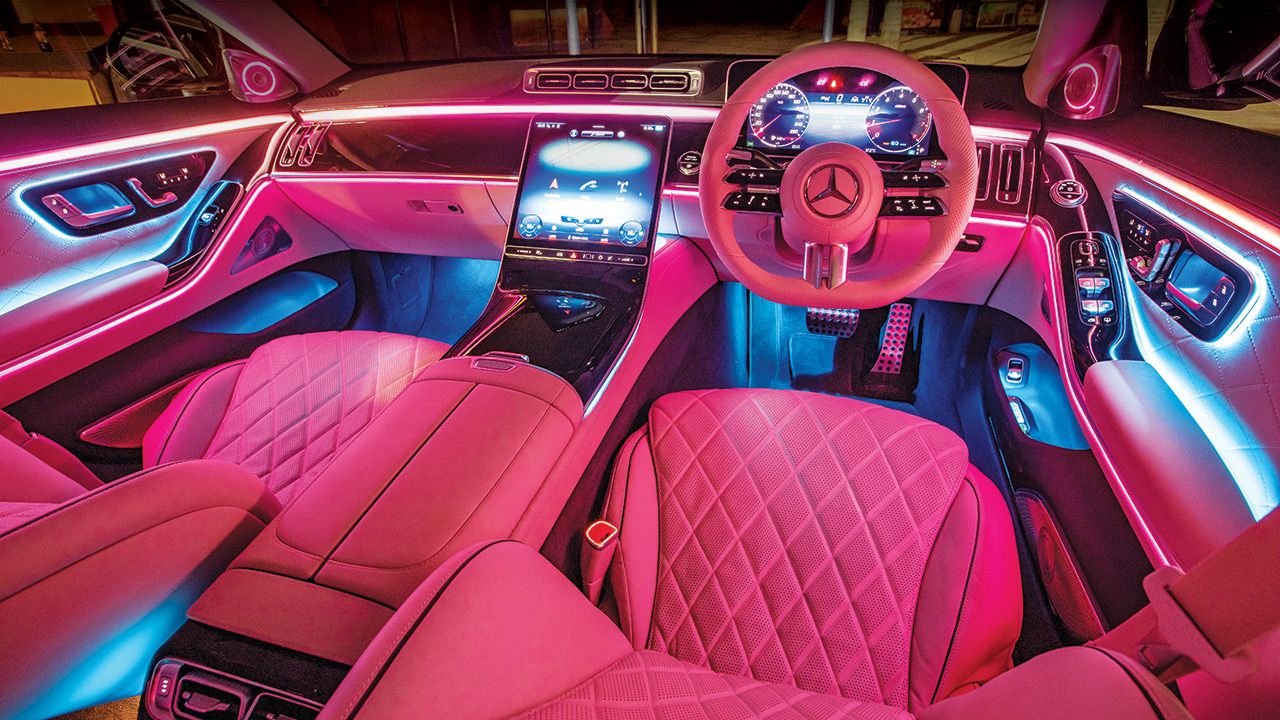 One of the new fads in cars is ambient lighting, and here, the new S truly outdoes every other car in the world. Featuring 64 different colour options, you can really transform and personalise the interior of the S. There is also an active ambient lighting feature, which sends you visual signals for different controls. For instance, if you raise the air-conditioning temperature, a red beam of light travels across the dash, which looks very cool.

Another highlight of the S is the new Burmester sound system – the tweeters mounted on the front doors do a nice twirly unfold, which is very cool to look at. Apart from the signature perforated grilles, the S also comes offers 4D surround sound. I tested the audio system in normal mode, though, and I must say that it was highly impressive. 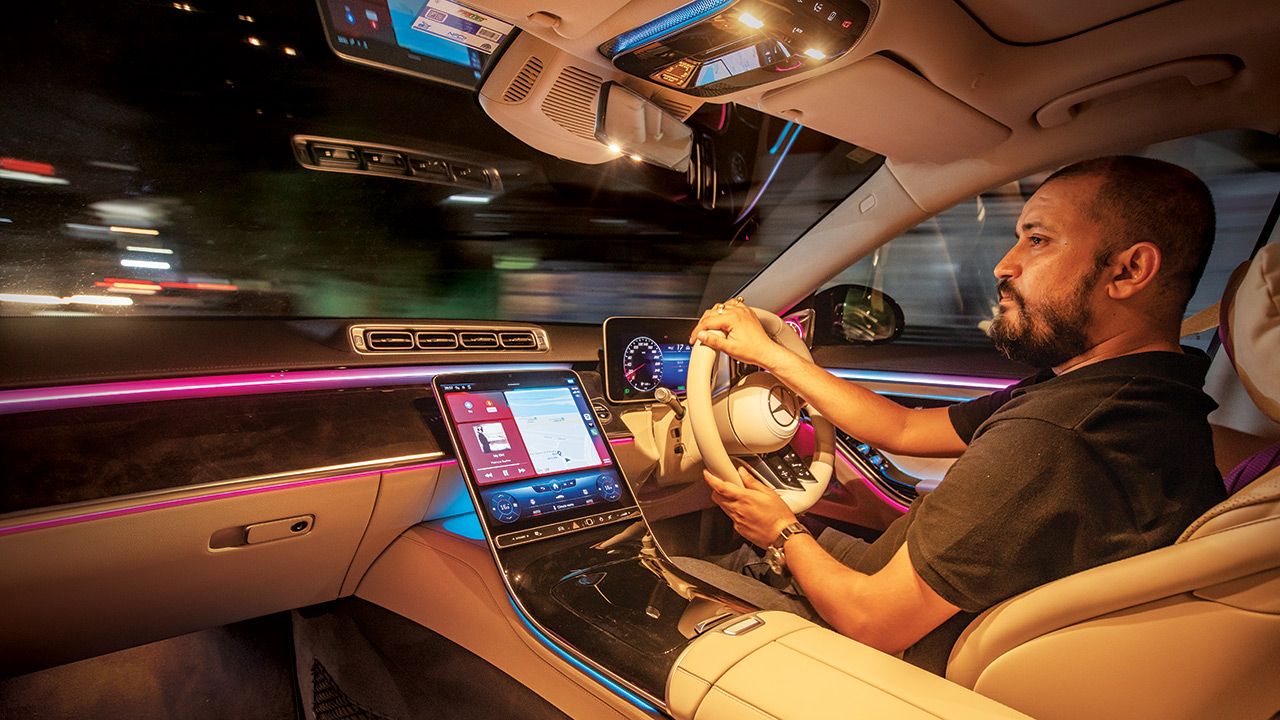 Of course, to integrate all this new tech and features, the S also features a brand-new dash design – front central air vents have been placed right on the top of the dash, ostensibly to make room for the large multimedia screen. A large slab of wood extends on both sides of the screen, which looks pretty good, along with the U-shape curve in the dash.

There’s a tad too much chrome inside the S for my liking – I would’ve preferred if some elements were a bit more subdued – but I really like the positioning of some of the controls, including the one for the headlight, which feels right at home at the top of the door pad. The traditional Mercedes door-mounted seat controls also feel solid and impressive; however, the movement of the actual switch, when you adjust the seat, is so minimal that I found it rather frustrating to use – it’s really difficult to figure it out whether you’ve pressed the button hard enough or not. A few more millimetres of travel would have done the trick. 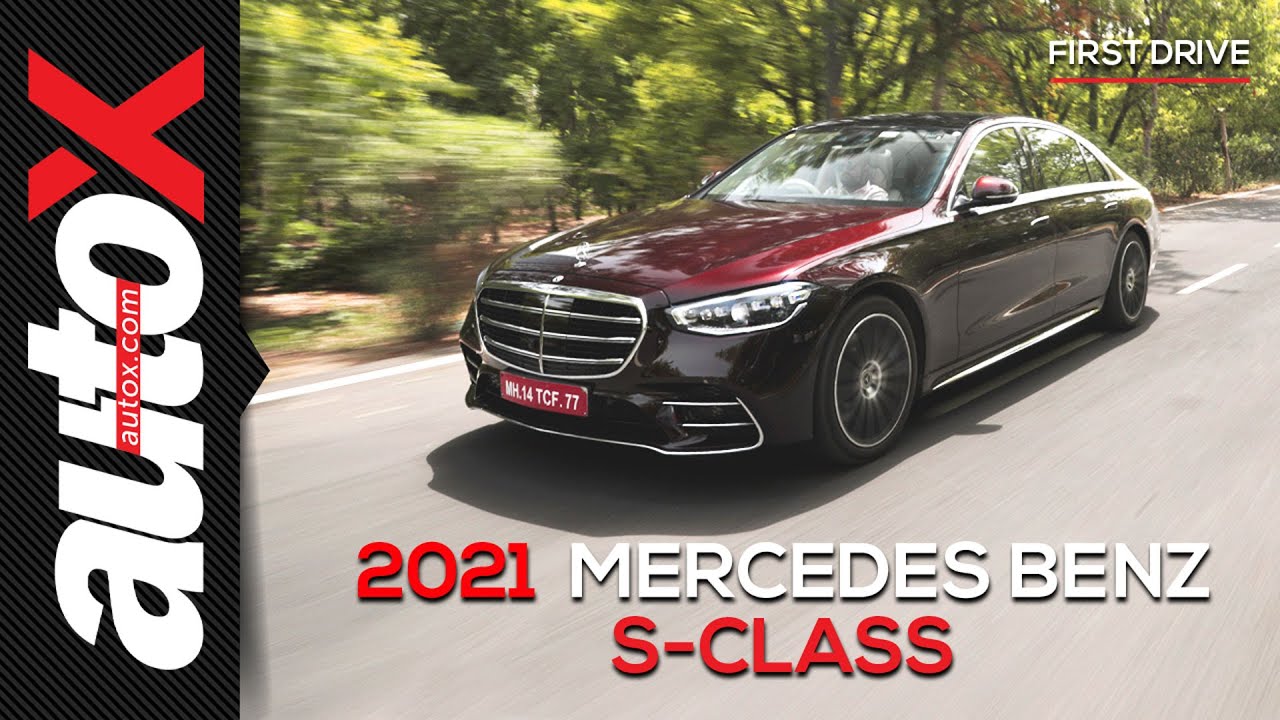 Coming to the seats, the seats of the launch editions of the S come wrapped in quilted leather and, as you’d expect, are superbly comfortable with more than enough room for people of all kinds of heights. Also, I love the fact that all four seats in the S come with ventilation – a blessing in our weather – and massage functions. The launch editions of the S also feature an AMG sports steering wheel, with touch functionality to control various functions. Despite the excellent design of the wheel, I found the touch functionality cumbersome to use – I think the traditional rotary controls of the older cars were perfect and worked flawlessly.

Now, the main reason for owning the S-Class – at least in a country like India – is to enjoy the comfort of the rear seat, and here, the new S once sets a new benchmark as the seats are tremendously comfortable. The new S is wider, longer, and has more headroom than the last-gen car. It also has acres of room in the rear seat – overall, space is certainly not a problem for the new S.

The seats are electrically adjustable, obviously, and the seat diagonal to the chauffeur, when fully reclined and with its leg rest up, can rival business-class seats of most jets. Add to that the ventilation and massage function, and what you get is a seat that you wouldn’t mind being stuck in for hours. 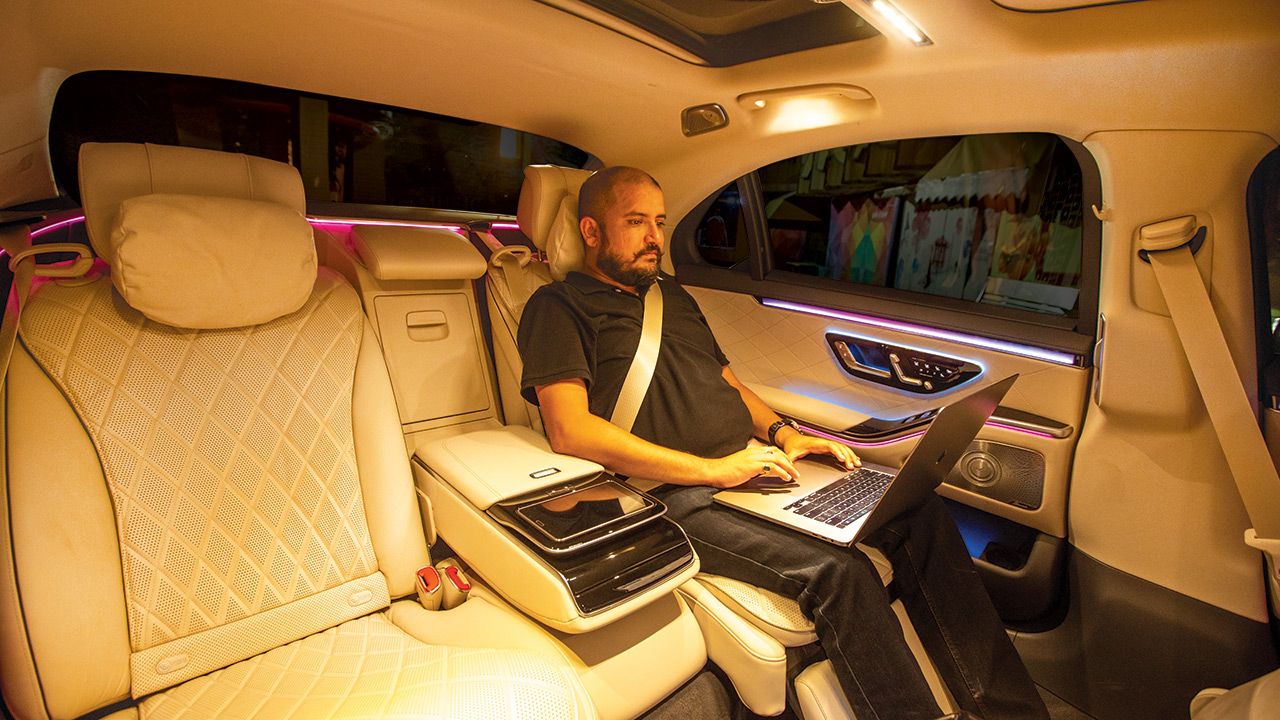 Of course, the rear seats also get individual touchscreens, which can be used for various purposes. There is also a centrally mounted MBUX tab, which can be used to control the screens if they are too far away for you to reach. You can also consume multimedia content via these screens, and also use an Amazon Fire Stick to watch OTT content on the move. Another highlight is the first-ever integration of front-facing airbags for rear passengers, which takes the overall airbag count in the car to ten. In the event of a crash, these airbags deploy from the back of the front seats.

The S also takes a significant leap forward in terms of driving experience. The new platform of the S features aluminium-hybrid construction and is lighter and stiffer. On the road, it feels a lot more nimble and sharper, and the steering communicates well all the time. And for the first time, the S features rear-wheel steering, which helps in both low-speed turning and high-speed manoeuvres. At low speeds, the rear wheels of the S turn in the opposite direction of the front wheels, which shortens the turning circle of the car by two metres – it may not sound much, but it makes a huge difference while driving in urban areas. The S is now easier to park than before – it can take most U-turns in a single turn, whereas the older car would’ve required a three-point turn.

Our test car was the S450, which is powered by a 3.0-litre turbocharged petrol engine, producing 362bhp and 500Nm – there is also the S400d variant for diesel lovers. Given its lighter weight, the S450 actually offers more performance than you need on Indian roads. It can do the 0 – 100km/h sprint in just over five seconds. The engine is mated to the 9-speed gearbox, which is getting better by the day and makes the driving experience of the S as good as you can expect. Also, both launch versions of the S feature all-wheel drive, which means that putting down all that power is a piece of cake. 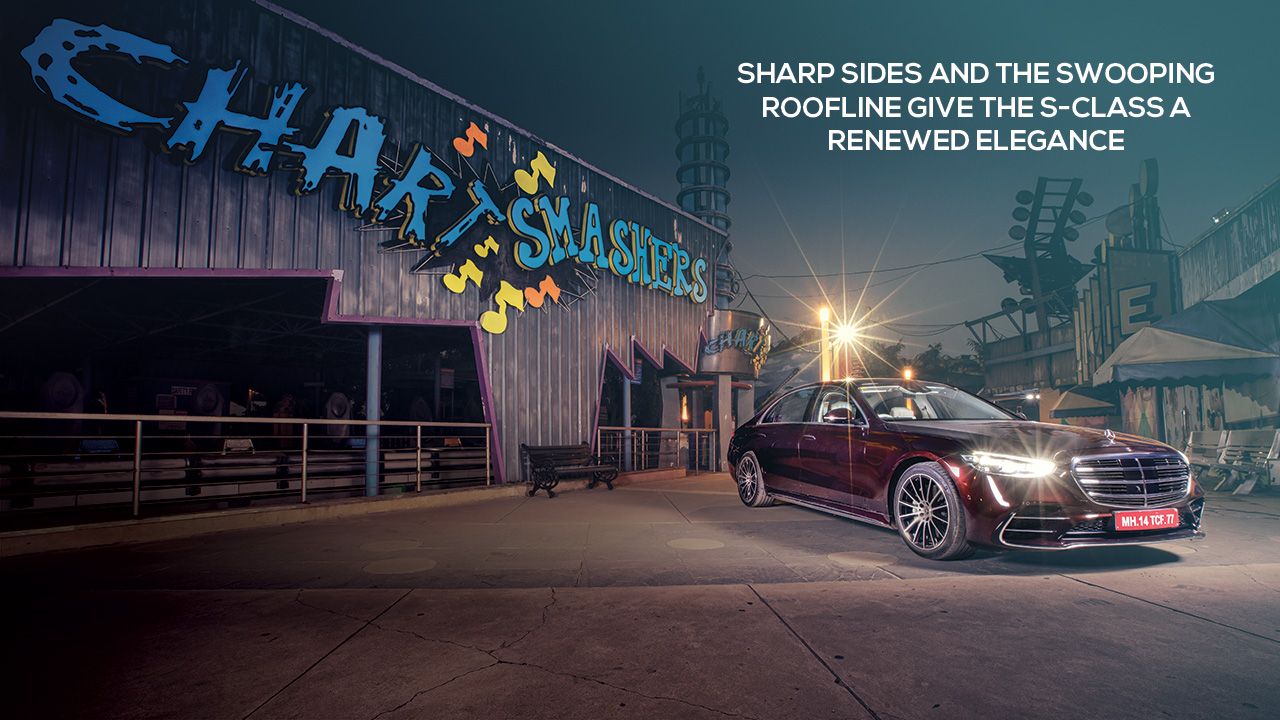 So, it seems that it’s time to address the big question – is the new S-Class the best luxury sedan in the world? Looking at the competition, I would have to say, a resounding yes – the new S, once again, moves the game ahead by a very large margin.

I think that the biggest highlights of the new S are the brilliant quality of the interior, the integration of all that technology, and its design. But as they say, nothing is perfect, and the S, too, has some room for improvement. For instance, the 20-inch wheels particularly make the ride very firm at low speeds – it’s likely to improve with later versions, which will come with smaller wheels. Also, the large A-pillar hinders your vision significantly while turning, which can get really annoying. And then there is the matter of the touchscreens. Now, while it’s true that I am not a fan of touchscreens in cars, there is no denying that it’s brilliant to operate in the S. Nevertheless, the fact remains that it’s a fingerprint magnet and that you have to take your eyes off the road to perform even a simple function.

Also, on my first day with the S, the screen froze, and I couldn’t change any settings, not even the air-conditioning temperature – frankly, it’s a risk that we are constantly in, with computers and devices increasingly becoming an integral part of our lives. That said, the screen was perfectly fine the next morning, and I still don’t know what made it freeze in the first place. 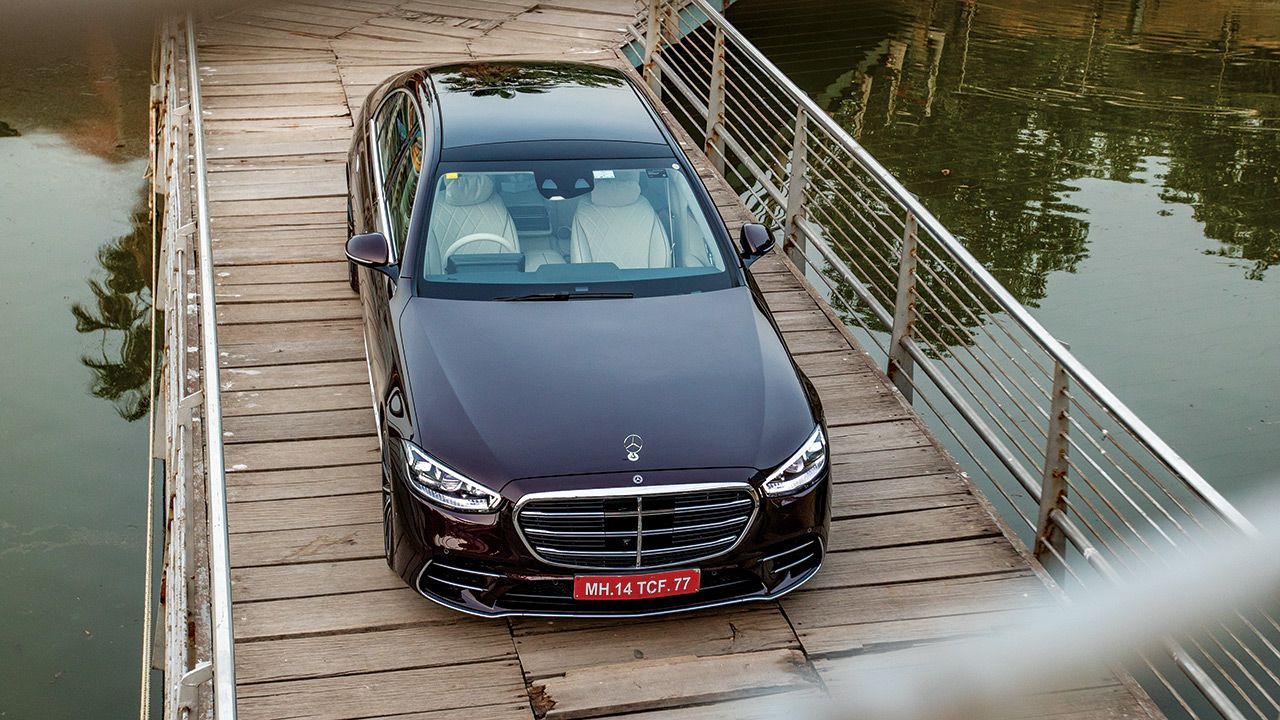 And lastly, all that luxury and features don’t come cheap. With an ex-showroom price of Rs. 2.2 crores, the new S is a lot more expensive than the last-gen car. But then launch editions of the S are always expensive, and more reasonably-priced variants of the S-Class will come in a few months’ time – I never knew that it was possible to mention the words ‘reasonably priced’ and ‘S-Class’ in the same sentence! – making the price increase more palatable.

In summary, with its luxury, tech, and brilliant drive experience, the S-Class is definitely the best luxury sedan in the world currently. But, given its price, stiff ride, and some other glitches, I wouldn’t, as mentioned above, call it perfect. On the other hand, all 150 units of the new S-Class have already been sold out in India, which gives you an idea of what customers think about the new car, doesn’t it? 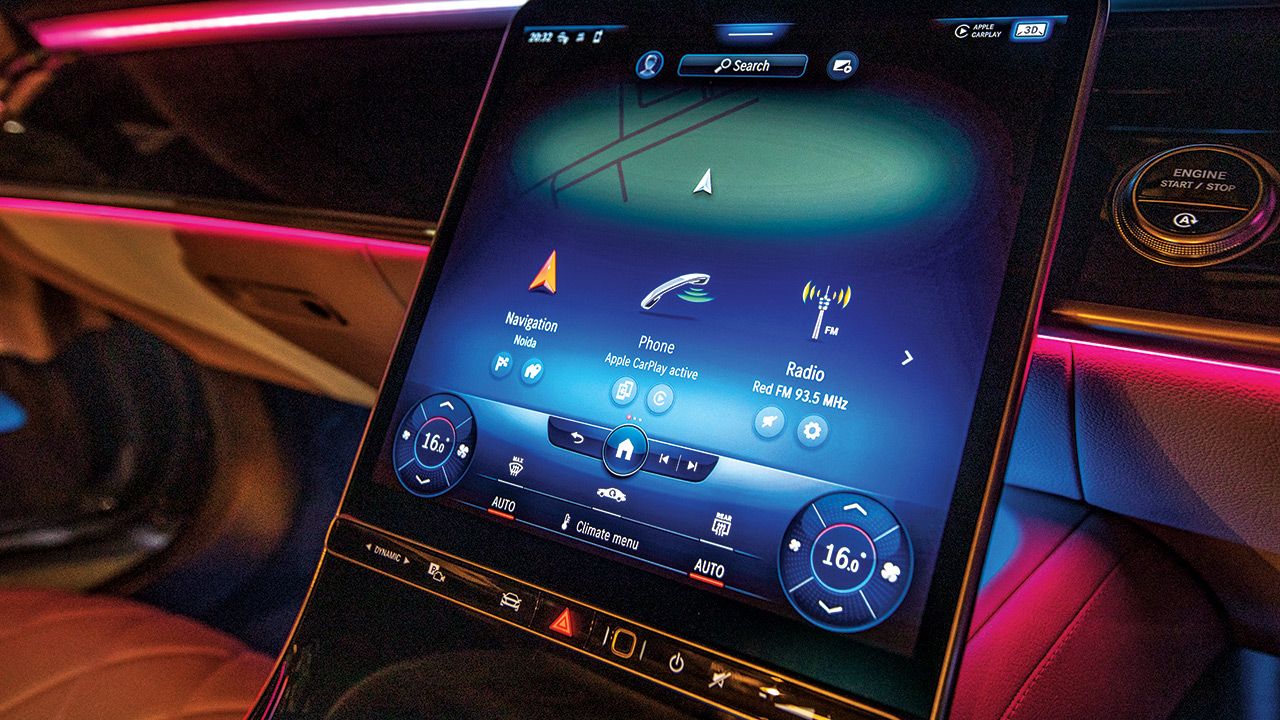 The interior of the S-Class is filled with screens, from the 12.8-inch multimedia screen to individual screens for the rear seats. 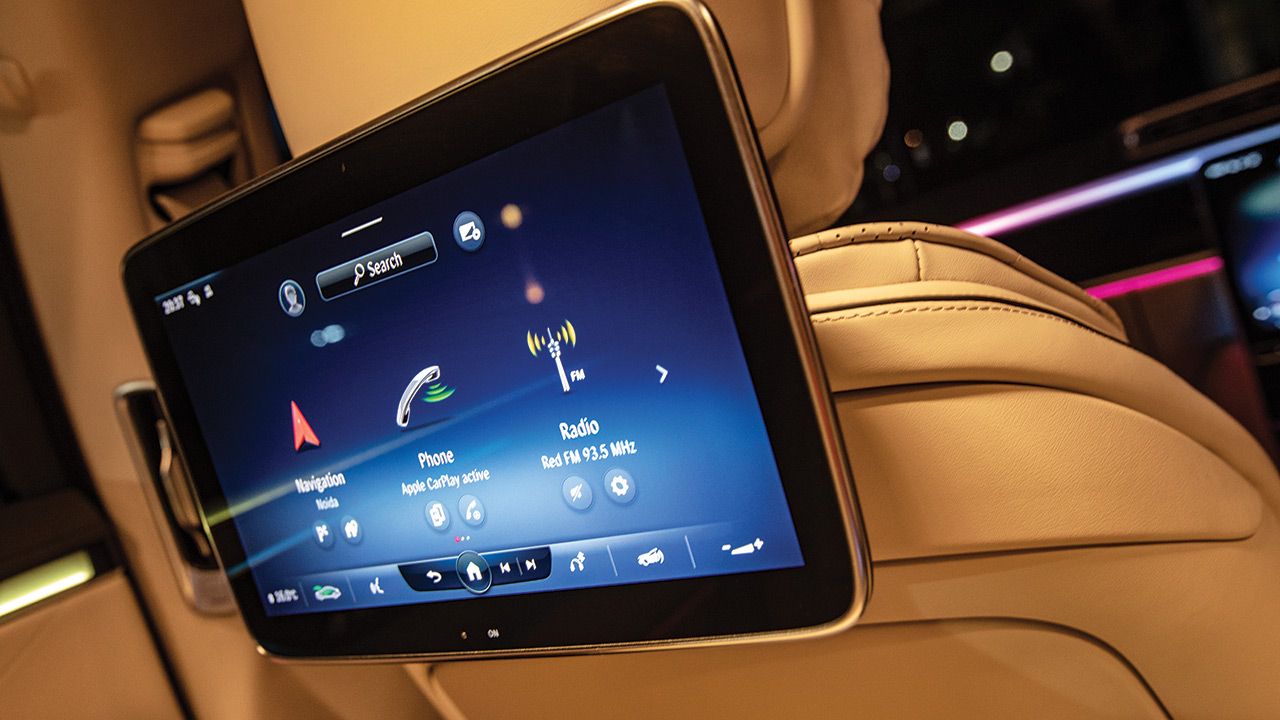 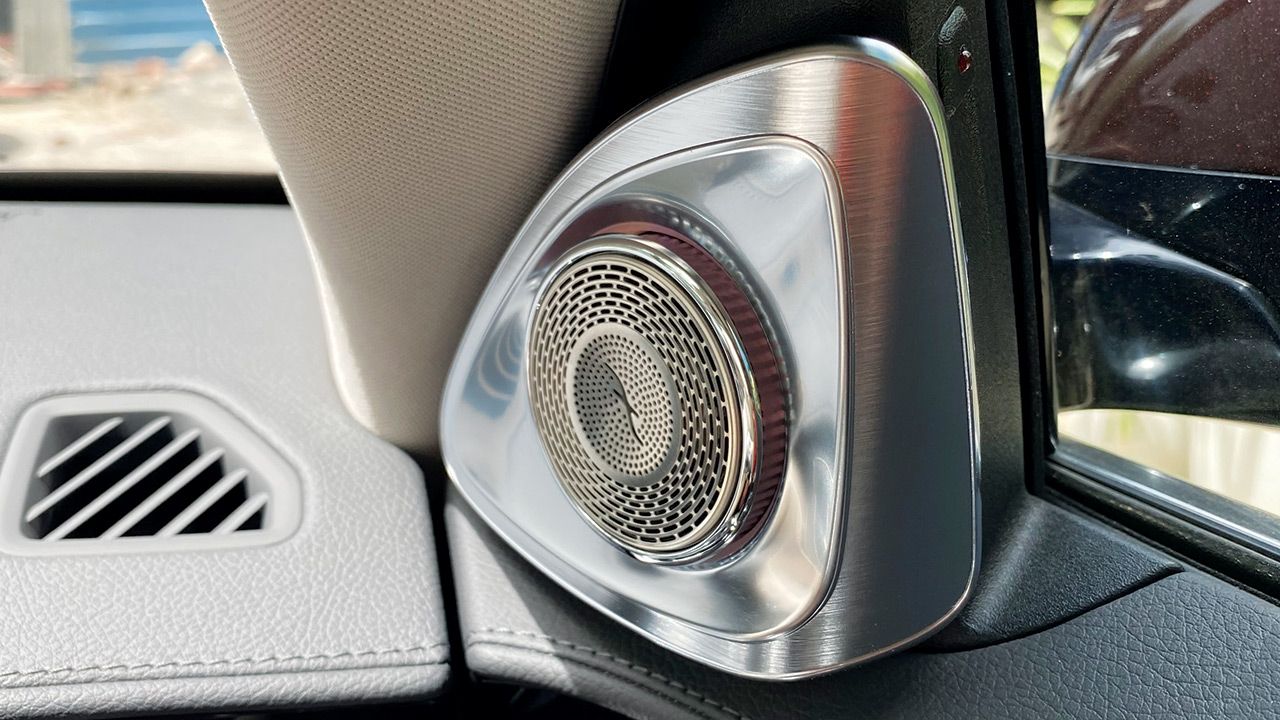 The twirly unfolding of the Burmester tweeters at startup is pure theatre. For comfort, the S-Class also features 4-zone air-conditioning. 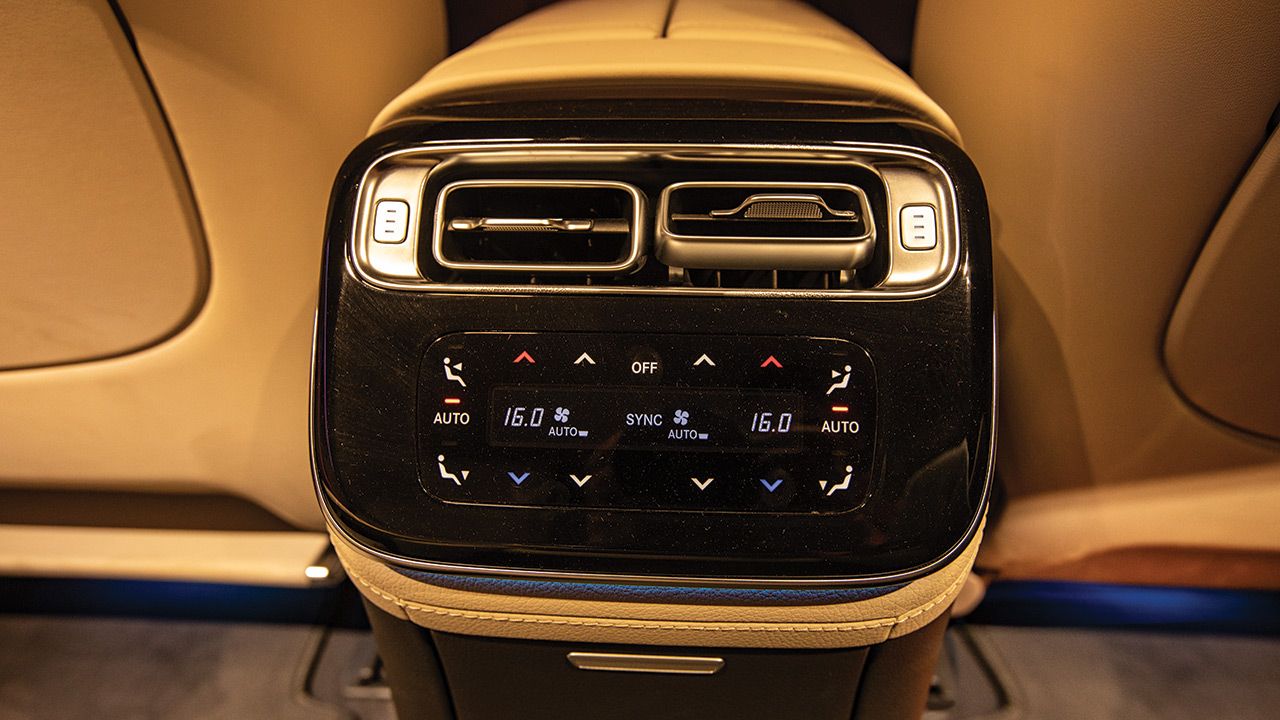 X-Factor: With a brand-new and tech-laden interior, the new S definitely moves the game in the luxury-sedan segment forward.