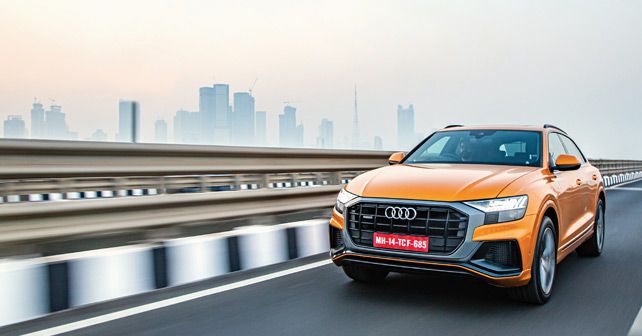 With its coupe-SUV styling, the Q8 is quite the deviation from Audi’s previous flagship, which had luxury and comfort at the top of its priority list. So, can the Q8 repeat the magic of the Q7?

Flagship offerings carry a huge responsibility – that of reflecting the brand’s potential in almost every domain. Take the Audi Q7, for instance. With an unmatched blend of presence, luxury and comfort, it became the default choice of wheels for film stars and business tycoons alike. It doesn’t come as a surprise, then, that the Q7 was immensely successful across the globe.

Now, achieving success is tough, but repeating it is even tougher! A task that the new Q8 seems to have taken upon its shoulders, i.e., of going beyond the benchmarks set by the Q7 to be Audi’s new flagship. The question, then, is – can it deliver?

Shape Up
In the last few years, Audi cars that have come to India haven’t exactly been… well, setting standards in terms of design! The second-generation Q5 was, dare I say it, somewhat unimaginative. The A6, while it had a good combination of elegance and sharpness, it, nonetheless, remained under the shadow of its predecessor. But the Q8 is different. 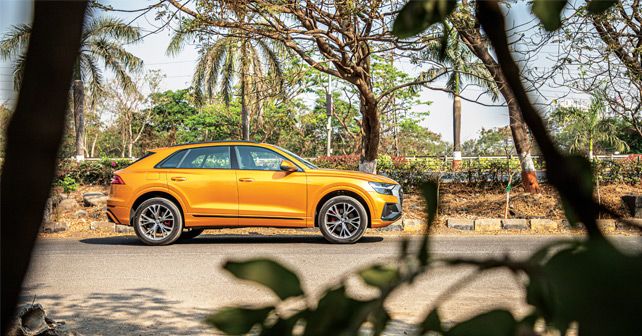 The Q8 continues the global trend of massive grilles, but, thankfully, unlike some new BMWs, doesn’t look unnatural. The grille sits flush in the front fascia, the headlights look sleek and sharp, and the large air dams add a sense of sportiness to the face. And I love the fact that the entire exterior of the car remains chrome-free.

The Q8 is quite unique in profile too. Unlike most coupe-SUV rooflines that start descending sharply from the B-pillar, it has a slightly tapered roof that disappears into a sharply angled C-pillar, essentially allowing for better headroom for rear seat passengers.

The optional 21-inch split-ended alloy wheels and the frameless doors further add to its stylishness in profile. When you look at the Q8 from the back, it’s hard not to be reminded of the Lamborghini Urus, especially that sharp cut on the tailgate. And that gloss black applique is reminiscent of the old Quattro rally cars. And, while the Q8 has some typical Audi design elements, they’re presented in a fashionable and modern way. 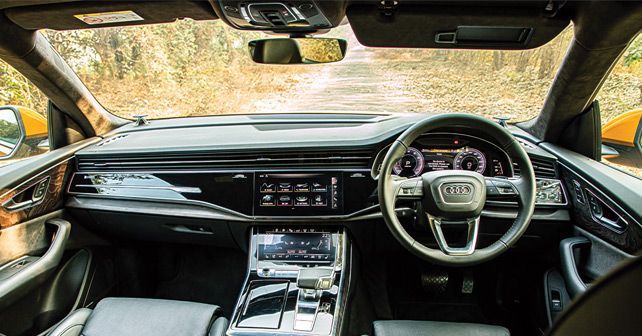 Inside Job
The interior of the Audi Q8 is quite a mixed bag. There are a lot of things that work in its favour, but quite a few that don’t meet the expectations from a `1.5 crore car. For instance, the overall layout of the dashboard is achingly similar to the A6 – a car that costs roughly half as much. Also, I’d have loved to see a more exclusive interior. Audi has, however, tried to redeem itself by offering numerous upholstery and inlay options – something that should help set it apart.

Like a lot of luxury cars on sale today, the Q8 gets three screens. There is the updated Audi Virtual Cockpit behind the steering wheel, which is amply informative and easy to operate. The car that we had on test was also equipped with the optional head-up display. The second screen, for the infotainment system in the centre, is responsive to touch and has good resolution but misses out on gesture controls, like the new BMWs. 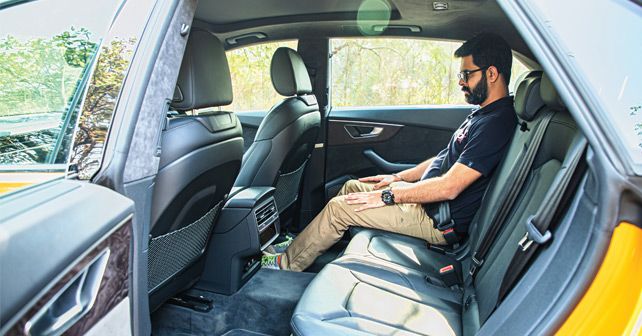 At the bottom is the screen for the automatic climate control and a few other settings. Although this one has haptic feedback, I still prefer traditional knobs and buttons – you simply can’t use this screen without moving your eyes away from the road.

Despite being 66mm shorter than the Q7, the wheelbase is similar. As a result, the leg and knee room at the back are more than what you’d imagine. Surprisingly, headroom is acceptable too, and that’s mostly because of the way the car has been designed. And I’m glad that the Q8 isn’t a 7-seater. Frankly, you rarely see the third rows of such cars being occupied – not to mention that they usually aren’t really known for third row comfort.

Six-pack
Audi has already announced that it won’t offer any diesel engines in India from April onwards. Therefore, the Q8 is only on sale in 55 TFSI trim, which means it gets a 3.0-litre V6 that delivers 335 horses and 500Nm.

Considering that the Q8 tips the scale at 2.1 tonnes, the engine has a lot of weight to pull, but once you get going, it doesn’t quite feel laboured at all. Gaining speed is a rather effortless affair, and the torque spread is even right from low rpm. Thanks to this, the Q8 feels rather quick. In fact, it does the 0 to 100km/h dash in under 6 seconds, which is quite impressive considering its weight. 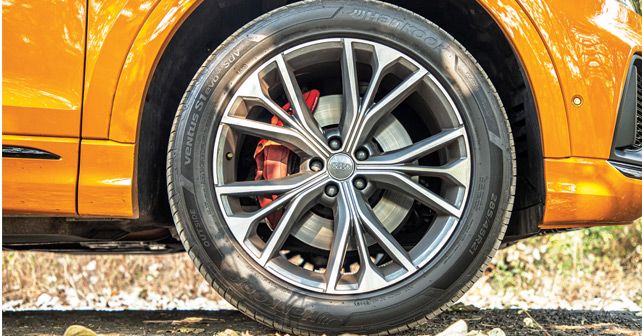 The engine really shines in terms of refinement and composure too. Inside the cabin, it isn’t noisy or uncomfortable, not even during quick overtakes on the highway. In fact, it does its duty in an extremely calm and unassuming manner. Just like other Audis, the Q8 too comes with different driving modes. Switching from Comfort to Dynamic does make the engine a bit more eager, but it still doesn’t exude a sense of thrill.

The car is brilliant around bends. The optional all-wheel steering, the central locking differential, and all the other technological wizardry work together to ensure that the car feels superbly planted – especially for its size. Body roll is well contained, and the tyres provide more than enough grip. Dynamic mode adds some weight to the steering, which further enhances your confidence. The Q8’s air suspension also does a good job of cushioning most ruts and potholes, and that’s despite the fact that our test car was fitted with 285/45 section rubber wrapped around 21-inch wheels. 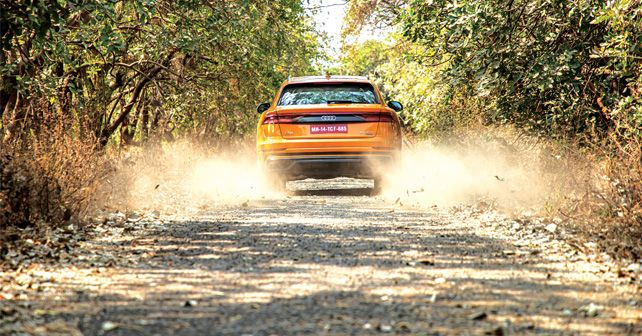 Worthy flagbearer, then?
Brought into India as a CBU, the Q8 is priced at `1.34 crore (ex-showroom). While its pricing is questionable, especially considering that there are a lot of options at that price point today, it’s also true there is a lot to like about the Q8. It looks stunning, impresses in terms of space and comfort, is refined, and rides like a dream.

Will it sell as well as the Q7? Certainly not, and Audi seems to be mindful of that fact. But, still, the fact remains that the Q8 sets new benchmarks as Audi’s flagship SUV.

X-Factor: Easily the most practical coupe-SUV we’ve ever driven!