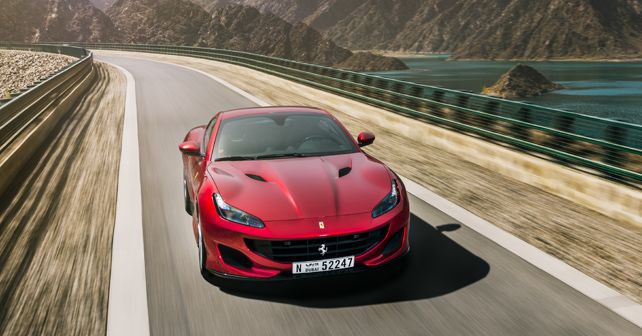 It might be the entry point into the vaunted world of the prancing horse, but the new Portofino packs an iron fist with its turbocharged V8 engine and classic Italian design. And with an increasing number of people looking to buy their first Ferrari, does the Portofino offer them a true supercar experience? Ishan finds out.

70 percent – that’s not a small percentage of any equation. In this case it signifies over two-thirds of first-time Ferrari customers, and their choice to opt for Ferrari’s erstwhile entry-level machine, the California – the predecessor to the Portofino. In favour of transparency, let me admit upfront that I was never a fan of the California – despite its vast commercial success. The design seemed a bit too timid – and, honestly, what’s the point of a Ferrari without styling that makes you lust after it? Especially when you consider siblings like the 458 Italia and the F12, which are pure poetry in design. 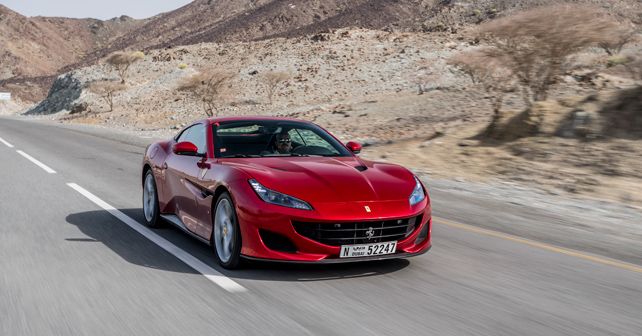 The everyday Ferrari
But, like I said earlier, when one puts on an accountant’s spectacles, the California was an unprecedented success. It opened up the Italian marque to an altogether new customer base, and with 70% of customers buying the California as their first Ferrari, it created a very promising future for the Italian brand. More importantly, it demolished the perception that Ferrari’s aren’t cars that can be daily-driven. And, in this way, it added a new angle of practicality for the brand. Naturally, then, the successor to the California has quite a mountain to climb to meet these sales expectations – and, for me at least, correct the shortcomings of the California.

Time for the Portofino to make its entrance then. And I have to say, with my first look at the Portofino in the metal, I could see that the new car was a different beast altogether. The biggest change, of course, is in the styling – with the Portofino ditching the diminutive look of the California for a flowing, rather Italian, design language that looks much more like a traditional Ferrari. Out goes the stubby boot and oddly shaped headlights for a much more conventional swooping long bonnet, with a far more proportionate rear end too. Of course, there are lots of scoops, cuts and aerodynamic crevices all over the bodywork to help the Portofino maintain its aerodynamic performance at high speeds. Needless to say, the Portofino, in my eyes at least, is a classically beautiful Ferrari – especially with its hard-top roof folded. 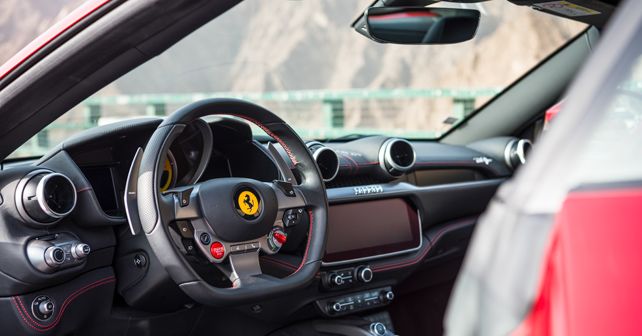 Lighter & faster
But the beauty of the Portofino isn’t just skin deep. With Ferrari choosing to give it a full mechanical overhaul too, the new car has lost over 80kgs compared with the California. It also has more chassis stiffness for better performance. Of course, considering this is a Ferrari, there has to be additional horsepower too – and so the Portofino features a revised version of the 3.8-litre turbocharged V8 engine, but, in this trim, the engine produces 592bhp – an improvement of 39bhp over the California. Power is transferred to the road via a 7-speed DCT gearbox, which features a third-gen electronic e-differential as standard.

Of course, figures and stats are all well and good, but the proof of the pudding lies in the eating – and so to test those claims, we hit the highways of Dubai to head towards the Hatta Dam near the Oman border. And it’s when driving on the wide, open highways of the Middle East that you get to sample the true potential of a Ferrari engine. To give praise where it is due, the 3.8-litre twin-turbo V8 has one of the highest specific power output engines in the world today – with a staggering 154bhp per litre – and yet, unlike most turbocharged engines, the Ferrari V8 has virtually no lag to speak of. A true marvel of engineering, the engine delivers an unbelievable amount of power at virtually any rpm or gear, and the Portofino shoots forward without even a micro second’s delay when pressed on. The tractability of the power band is something that has to be experienced to be believed, and the Portofino’s throttle response beggars belief. 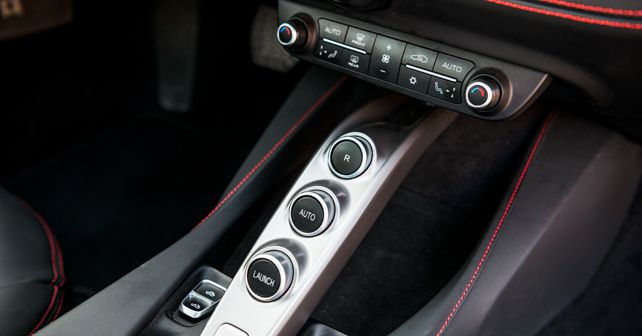 Sports car & grand tourer
Contributing to this impressive performance is the 7-speed DCT gearbox that delivers instantaneous shifts regardless of which mode it’s in. And while this might only be the second application of an electric steering rack in a Ferrari, it nevertheless works extremely well – delivering copious amounts of communication with an incredibly sharp response. The suspension too deserves praise, as the Portofino rides very well at regular speeds. Even on some bad roads that we encountered on our way, the suspension soaked up the bumps without a worry. And yet the Portofino hugs the road at high speed, no doubt helped by its excellent aerodynamics. In fact, if you’re just looking to cruise at a sedate pace in comfort mode, with the exhaust in its silent setting, the Portofino makes for a rather nice grand tourer – offering the option of covering hundreds of miles every day without any stress whatsoever.

But, not everything is perfect with the Portofino. For instance, while Ferrari claims the car is a 2+2, honestly, only young children would be comfortable in the rear seats. Secondly, while the hard-top folding roof works very well, when folded, it severely compromises boot space on long journeys. 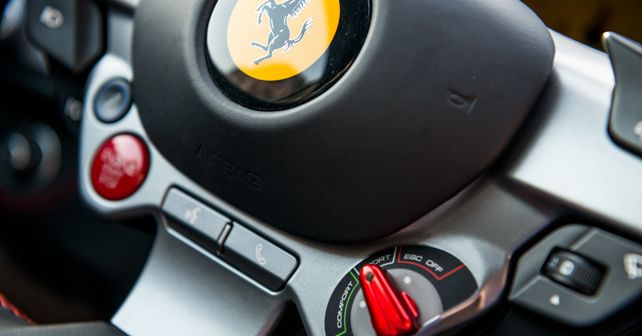 However, when you look at it from the point of view of a typical Ferrari buyer, these are small issues. Someone buying a Ferrari as a daily driver always has access to other cars for the purposes of long-distance travel. More importantly, no matter whether you’re trying to buy your first or your seventeenth Ferrari, the Portofino makes a very strong case for itself. It’s a beautifully designed car that works well, both as a coupe and a convertible, and despite having ‘only’ 592bhp – it’s an entry-level Ferrari, after all – it’s more than capable of satisfying your performance pangs, with the 200km/h mark coming up in just 10.8 seconds.

And, of course, there’s the beautifully crafted interior, with its superbly supportive seats and easy to use multimedia system that makes life easier. A special mention must also go to the air conditioning system – despite Dubai boiling at 43-degrees Celsius – the air conditioning kept us very cool throughout the drive. Of course, it doesn’t get cooler than cruising in a Ferrari, but that’s another matter. 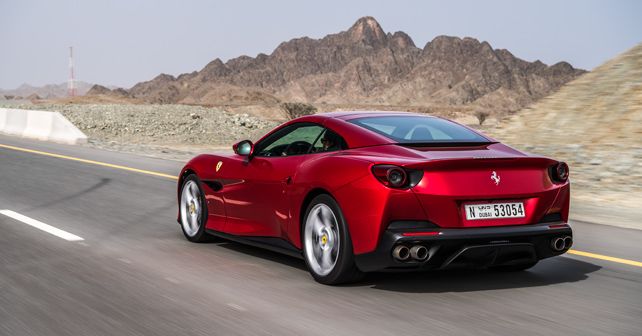 With all these qualities, then, the Portofino makes a very convincing case for itself as the entry-level supercar of choice for the uber-rich. It’s got the looks, the performance, and, of course, it has conceivably THE most desirable badge in history. The most important thing form our perspective is that this is an Italian supercar that you can actually use comfortably in India. The only fly in the ointment here, of course, is the fact that most of those amongst us lusting after the Portofino will never be able to afford one. However, the ones that can, and do buy one, well, they’ll be making a very satisfying choice indeed – and I shall be quite jealous of them. 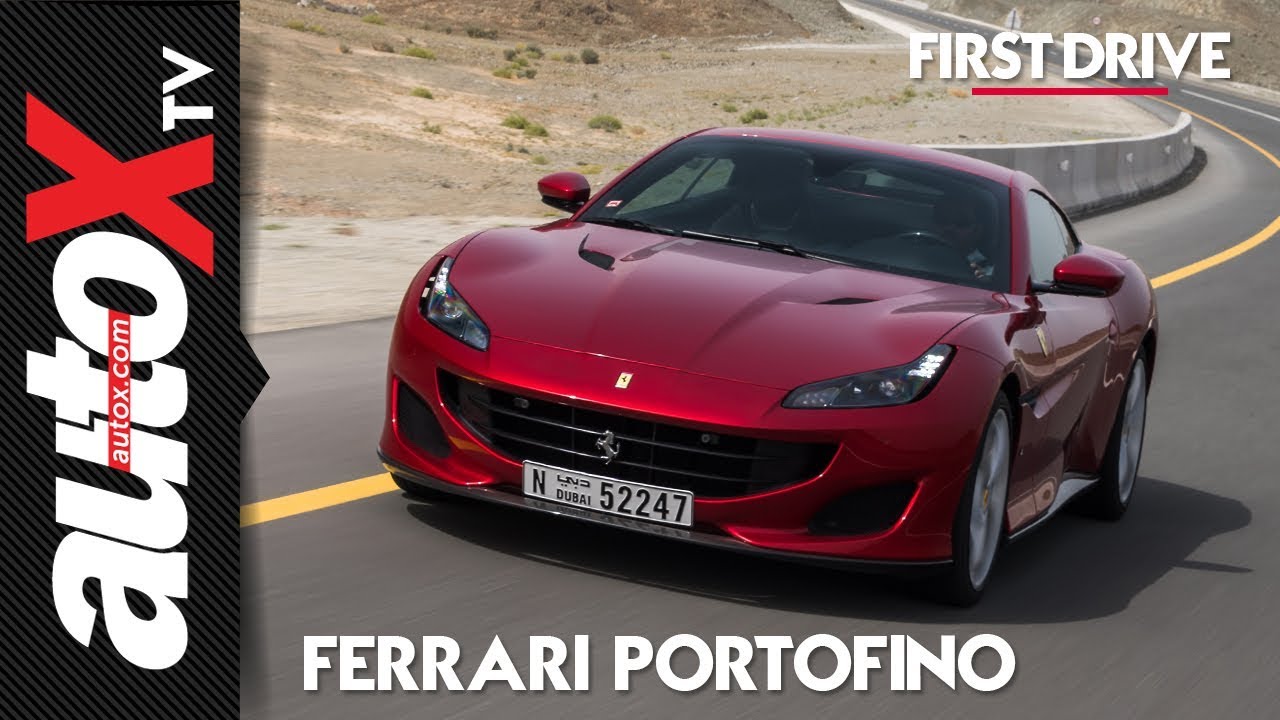