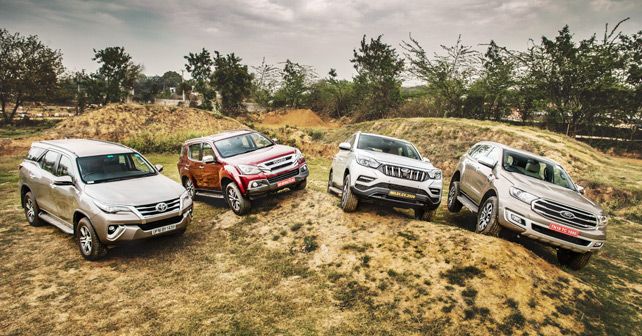 Ford and Isuzu have recently updated the Endeavour and MU-X respectively, while Mahindra has brought in the Alturas – all of which aim to take the fight to the class-leading Toyota Fortuner. So, which one is the mightiest of them all?

One of the toughest questions that I get quite often is: ‘What’s your favourite car?’ Now, quite honestly, I find this very hard to answer. I feel that different types of cars affect people in different ways. A fast car, for instance, gives you a thrilling experience and the pleasure of its inspiring soundtrack. Say the term, SUV, and it makes you want to push your chest out as you think about massive vehicles that are designed to intimidate.

Today, it seems that most car buyers prefer the latter – for SUVs are trending not just in India, but also around the world. However, most people are quite happy with crossovers or pseudo SUVs, which may look the part but fall apart if you manhandle them. These are not those kinds of vehicles! These are full on, body-on-frame honest to goodness SUVs. These are the real deal.

It’s no secret that the Fortuner sells more than all of the others combined, but they’re each vying to eat into a piece of that growing pie. So, let the games begin… 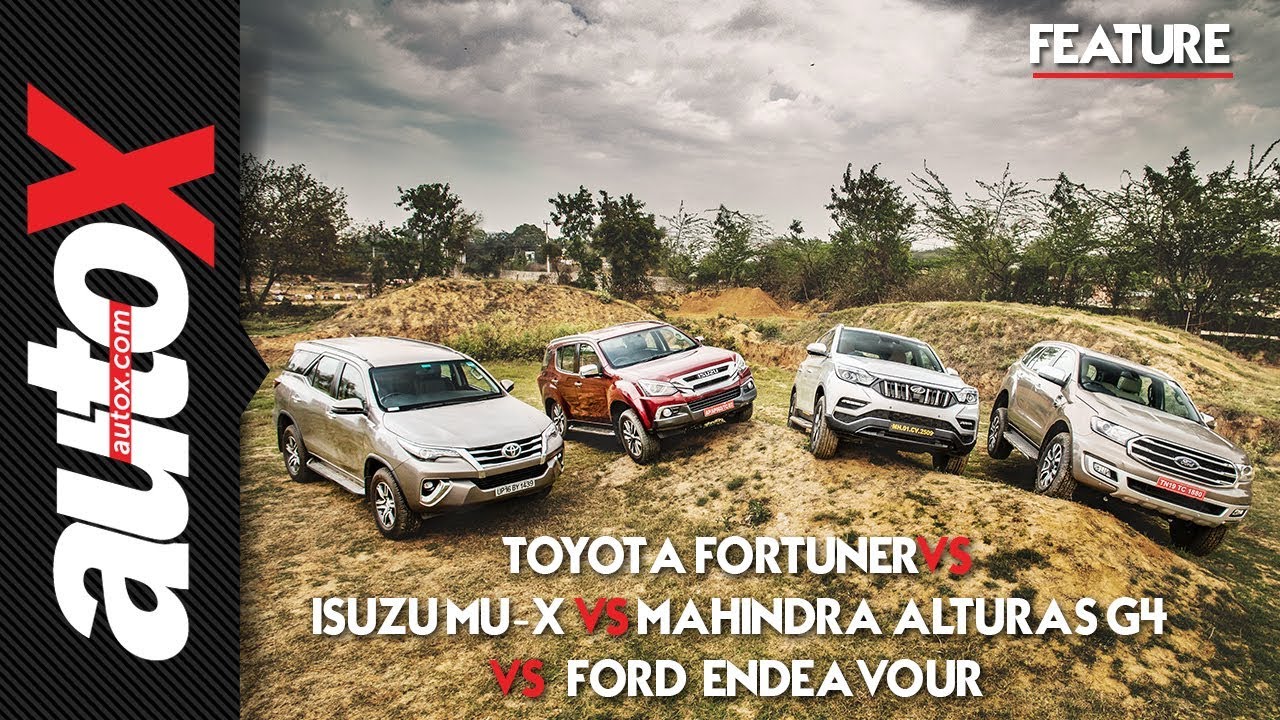 Mr Current Affairs
Ford’s 2019 Endeavour now gets a new front grille, a new set of alloys and keyless entry with an engine start/stop button. This means that the new Endeavour remains up to date in terms of features and is still the best-equipped vehicle in its class with a terrain management system, parallel park assist, a locking rear differential, active noise cancellation that reduces engine noise inside the cabin, a huge panoramic sunroof, and more.

It’s a good thing that Ford has left the majority of its recipe untouched, as the Endeavour remains the most sophisticated vehicle here. It feels very refined under normal driving conditions, and the suspension on this updated model seems to be slightly more comfortable than the previous one. Meanwhile, its 3.2-litre, five-cylinder, turbo diesel engine continues to offer excellent driveability. I also like the howl from the engine when you accelerate hard, although it does tend to feel strained as you cross the 3,000rpm mark. 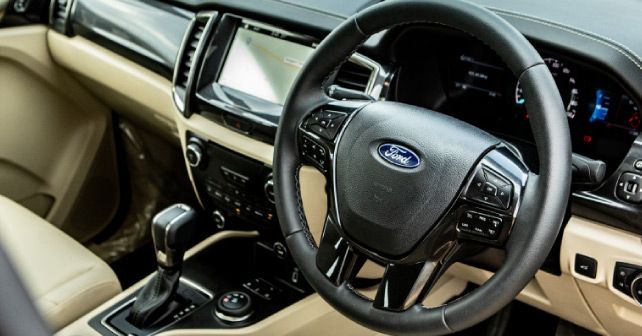 And while I wish that the six-speed torque converter automatic came with paddle shifters for faster gear changes, you must remember that this type of an SUV isn’t exactly about sports car rivalling performance. As a long-distance tourer, the Endeavour simply excels.

And if you decide to go off-roading, you always feel cocooned inside the cabin. I would have preferred more feedback from the wheels, but Ford tries to make up for this with its terrain management system that electronically varies throttle inputs to the wheels for better traction. It’s also the only SUV here that has a locking rear diff that sends equal amounts of power to both rear wheels under any traction situation. There’s no other way to put this, other than to say that the Endeavour is a very impressive machine, both on and off the road. 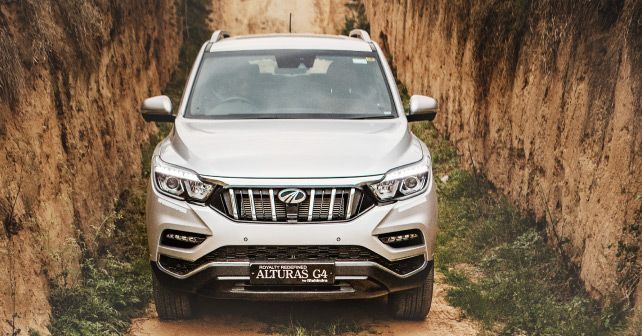 An ‘Indian’ from Korea
As you may have figured by now, it’s going to take a lot to beat the Endeavour. So, can the South Korean with an Indian passport pull it off? Well, when you look at the Alturas, it looks even more imposing, being higher-up off the road with a ground clearance of 244mm. It’s also wider than all of its rivals. But since it isn’t the tallest vehicle here, the Alturas has a very unique problem. It has a high floor and a low roof, which means that six-foot occupants run short of headroom (especially at the back, where the sunroof housing eats into the headroom). And because the floor is high, the seats are a bit short on under-thigh support. So, while I can sit comfortably in the Alturas, with my average height, I’m not sure I could say the same for tall passengers.

Still, the Alturas has a lot going for it. It has the most upmarket cabin of the lot, with quilted leather upholstery and good build quality and fit-and-finish. And while the Alturas may not be as well-equipped as the Endeavour, it does bring in some segment firsts – such as its 360-degree parking camera, electrically adjustable driver’s seat with 3 memory settings and 9 airbags. 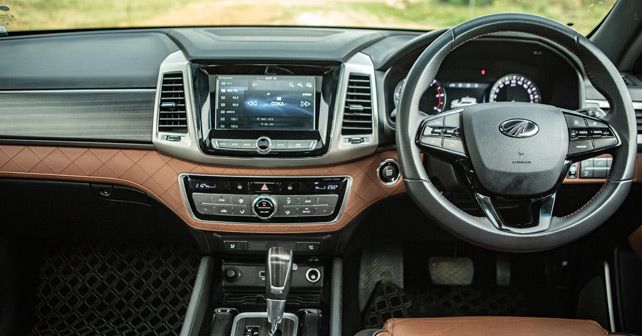 The Alturas does, however, come with the smallest engine here – a 2.2-litre unit! But it’s on par in terms of power and torque with the likes of the Fortuner and MU-X. The 178bhp engine is the quietest of the lot here, but it’s that Mercedes-Benz sourced 7-speed transmission that makes it the smoothest vehicle of this lot to drive. The gearbox itself goes about its business in an absolutely non-intrusive manner. The engine only tends to get gruff and loud past the 3,500rpm range. And I like the steering too, which definitely has more feedback than the others. The overall driving experience is let down, however, by its fidgety ride, which transmits too much information to the cabin – especially to the rear seat occupants.

Still, its ladder frame chassis gives it good off-road credibility. Plus, its high ground clearance allows you to drop the Alturas into deeper off-road ruts. But, then again, that’s only the case if you don’t have the optional running boards fitted to the car. The Alturas feels fairly confident off the road, despite not having a terrain management system or locking diffs. Power delivery from the engine is very linear at all times, so you can easily modulate throttle inputs and get a good amount of feel in regards to what the vehicle is doing at all times. Moreover, the high ground clearance instils you with a lot of confidence. 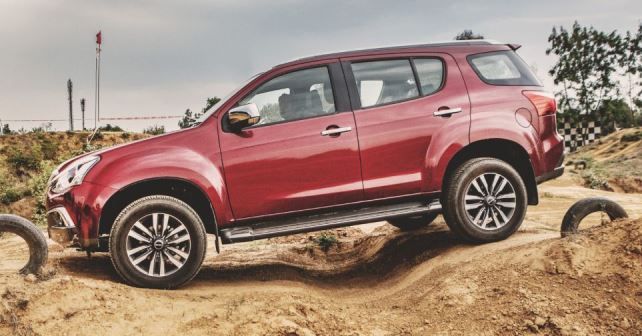 A Japanese specialist in the midst
Isuzu specialises in making diesel engines, and this shows in the MU-X’s powertrain – for its 3.0-litre oil burner is hooked up to a variable geometry turbocharger that gives it great off-boost throttle response. And once the turbo kicks in at 1,800rpm, the engine delivers power in a relentless manner, with 175bhp being produced at 3,600rpm. By this time, though, there’s a fair amount of engine noise inside the cabin, although the motor never sounds coarse. Still, you won’t have to push the engine to its limits most of the time, as that five-speed automatic gearbox, with well-spaced ratios and smooth shifts, does a great job of ensuring that the powertrain is always in its sweet spot. The Isuzu continues to impress on the road, as it has the best ride quality amongst all of the SUVs here. Its suspension set up, meanwhile, ensures that the least amount of suspension movement is transferred to the body. In fact, not too long ago, I went on a road trip in the MU-X, and the way it dismissed potholes the size of craters was very impressive indeed. 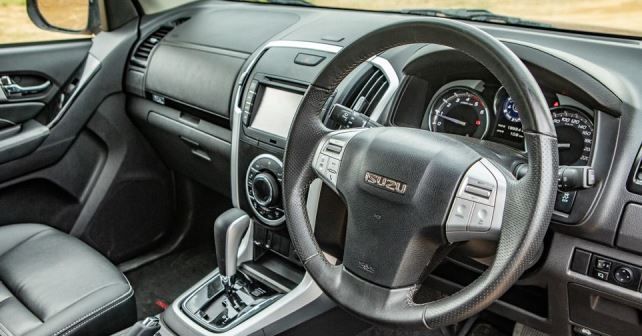 The MU-X scores well on the off-road front too, as its otherwise light steering becomes quite laden with feel the moment you engage four-wheel drive. Isuzu’s powertrain magic becomes apparent once again here, as any throttle pedal input results in very accurate wheel movements, giving you fantastic confidence while tackling off-road obstacles.

Unfortunately, the MU-X lacks the overall finesse that the other SUVs here have in terms of design and features. While you do get leather upholstery, the dashboard is almost all plastic, and the equipment list is rather short. With no satellite navigation, Apple CarPlay, automatic headlights or wipers, parking sensors, sunroof, etc., the Isuzu feels a generation behind. It’s for this reason that the Isuzu falls short of that ‘wow’ factor for buyers within the segment. Purely from a mechanical standpoint, however, you simply can’t go wrong with the MU-X. 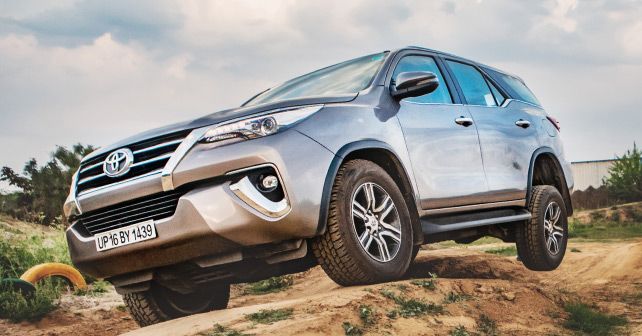 Toyota’s blockbuster Fortuner was the earliest model to have been launched amongst the vehicles here, but that hasn’t stopped SUV buyers from making it their default choice. The Fortuner name in India, in fact, has a certain ring to it. It’s viewed as sort of a benchmark in the Indian SUV space. So, what is it that makes the Fortuner name a brand in itself? Well, the Toyota brand is almost revered in India – not least because of Toyota’s inherent durability and reliability, which ensures unbelievably low running costs and mouth-watering resale prices.

On the flip side, the Fortuner has the bumpiest ride amongst all of the SUVs here, and it falls short of the Endeavour and Alturas in terms of equipment. Despite the fact that there’s a lot of leather in the cabin, the plastics and switchgear feel tacky. But you still know that it’s well built and will last forever. 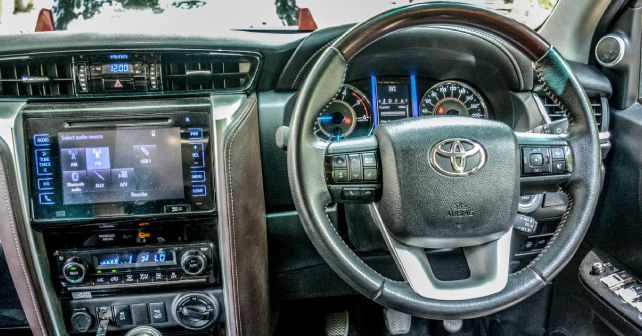 Furthermore, the Fortuner is offered with the widest range of powertrain options, which makes it even more appealing. The unit we tested was the diesel manual with a 2.8-litre, 174bhp engine that is the freest revving unit on the list – although some of that is down to the six-speed manual gearbox. When you put the engine in ‘Power’ mode, the Fortuner feels quite powerful, and the way it gains speed is quite alarming considering the sheer size of the thing! You just don’t expect to see 190 km/h come up on the speedo in a vehicle of this size and weight that quickly. Meanwhile, the light clutch pedal and short throw gearbox make this version of the Fortuner quite engaging to drive.

This level of driver engagement makes the off-road experience in the Fortuner by far the most involving, as you have total control over power modulation and can get a greater sense of traction and overall control while off-roading.

Off the beaten path
All of these SUVs have similar approach, departure and breakover angles. They have similar suspension travel and general off-road ability. But it’s the Alturas that you want to push harder over obstacles, owing to its tall ride height. That said, the manual gearbox makes the Fortuner the most rewarding off-roader here.

So, which one?
Now, for everyday use, you would most likely want an automatic transmission. However, the Fortuner AT, is a slow transmission that also makes the powertrain quite noisy – so that takes it out of the reckoning.

In terms of overall comfort, the Isuzu comes to the forefront with a well-synced powertrain and a comfortable ride. But, from an overall perspective, the winner of this comparison is the Endeavour. Thanks to its potent powertrain, a plush cabin, segment-leading equipment levels and overall comfort, the Ford is the best-packaged product of the lot. 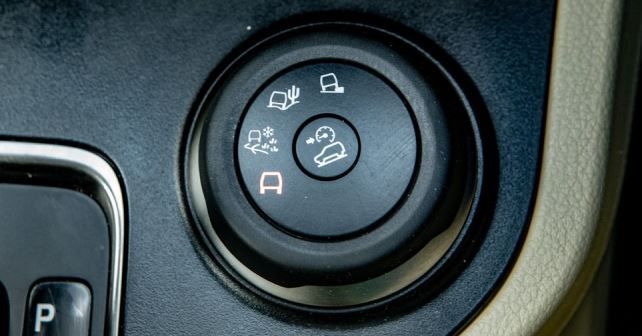 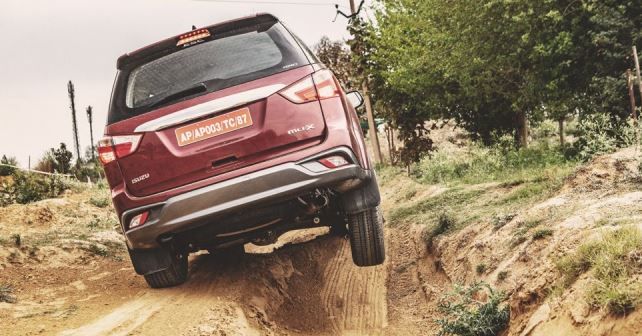 The MU-X has the best ride comfort amongst all of the SUVs here, suspension articulation is great for off-roading too. 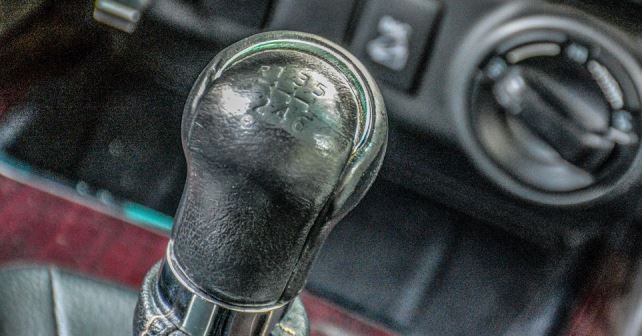 The manual gearbox, mated to the four-wheel drive drivetrain, makes the Fortuner the most engaging vehicle to drive off-road. 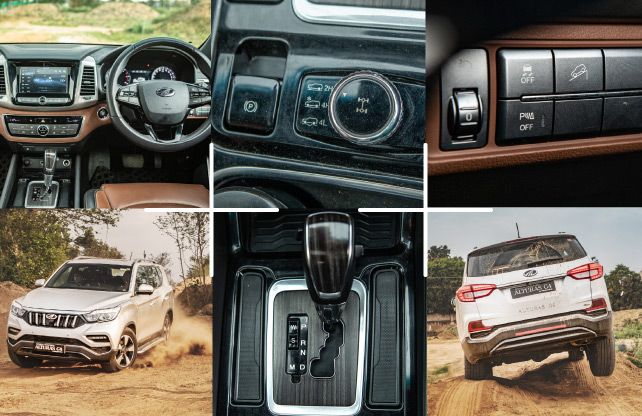 When it comes to its interiors, the Alturas’ cabin looks the most premium with its quilted leather upholstery, great build quality and fit-and-finish. It won’t disappoint you in terms of equipment either, with its electrically adjustable driver’s seat with memory function and 360° parking camera display.

X-factor: If you’re looking for a large SUV that’s fun to drive, comfortable and even capable of serious off-roading, there’s nothing that beats the Endeavour in its segment.

X-factor: Has a plush cabin and the lowest NVH in its segment.

X-factor: The most comfortable SUV within its segment to drive and ride in.

X-factor: The Fortuner is a brand in itself – and one that commands respect.