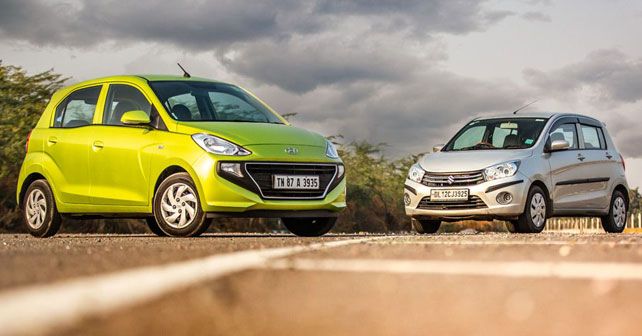 The automatic wars are getting more intense, as the emphasis on convenience increases. Has Hyundai stolen the show, then, with its brand new Santro or can the sales leader still hold its own?

It takes courage to name a product after a winning nameplate in your erstwhile model line-up, which established your very brand in the country. It was the original Santro, followed by the Santro Xing, that established the Korean carmaker’s presence in India after all. But Hyundai has been very confident about the new Santro. And with good reason it seems, since the Santro has sold very well in its first two months of being on sale.

But is it the best small automatic in the segment? Maruti Suzuki’s Celerio and the Tata Tiago are currently the other hot sellers. And all three come with AMT transmissions. The trouble is we couldn’t get our hands on test cars from either Tata or Maruti. Fortunately for us, we had a pre-facelift Celerio in our office – at 9,000 unit sales a month, they’re everywhere. So, a head-to-head battle was in order, finally.

First impressions matter
Hyundai has tried to endow the new car with an unmistakeable and unique identity, with a large front grille that incorporates a pair of large fog lamps. And I must say that it looks like nothing else on the road and definitely stands out amongst other small cars. Paying attention to the overall profile though reveals that it has a very similar silhouette to the original i10. In fact, it even comes with the same 1.1-litre, Epsilon G4HG petrol engine. But it’s the interior where things really work for the new Santro, as Hyundai has fitted it with an all-new dashboard that really looks modern and feels fairly posh too. The black plastics in our Diana Green test car look great, and all of the switchgear and controls have a quality feel to them. The Diana Green not only looks unique from the outside, but also gets a unique interior. Not only do you get the sporty black trim, but also green accents in the cabin to accentuate the exterior colour. You also get Porsche GT3-style colour coordinated seatbelts. All in all, a job well done by Hyundai. 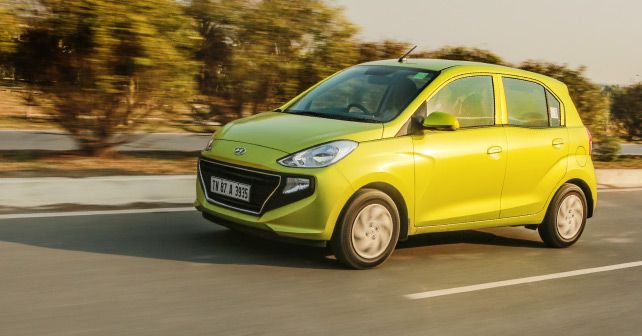 Segment leader for a reason
But the Santro does have a few chinks in its armour. The infotainment screen doesn’t double up as a reverse camera display in the Sportz model, and there are no speed sensing door locks, no tilt adjustable steering, no height adjustable driver’s seat and you only get one airbag.

And this is where the Celerio comes to the fore. True, its interior may appear dated, and there’s no touchscreen infotainment system, but you do get Bluetooth connectivity like the Santro and the speakers are of better quality than the Hyundai. The real ace up its sleeve, however, is the fact that this AMT model can also be had in four variants. In the top-spec ZXi (O) variant you get a lot more equipment than you do in the Santro AMT, as the latter is only available in the mid-spec Magna and Sportz variants.

The Celerio though is not as wide as the Santro, and therefore, the cabin feels a little bit tight on space. While the Celerio’s cabin has decent plastic quality and fit-and-finish, the Santro’s interior just feels more premium and modern. The Celerio’s compact dimensions are also evident on the outside, as the car definitely looks smaller than the Santro. And while the Maruti’s profile is well-balanced, its design is beginning to show its age. It now looks a little dated – even with an updated model that sports a new front bumper, grille and some minor interior cosmetic changes. Despite the fact that I’m personally not a fan of the Santro’s design, especially its many lines in profile, there’s no doubt that people will take notice of the new Santro’s presence on our streets.

So, round one goes to the Santro then, as it definitely looks and feel more modern and premium than the Celerio.

Celerio flexes its muscles
It’s no secret that Maruti makes the best small petrol engines in the business. Its 1.0-litre and 1.2-litre K-Series engines are always happy to rev and sound even happier on full chat while delivering best-in-class performance. What’s more, they return the best fuel efficiency too. It’s a recipe that’s hard to beat. So, while Hyundai’s larger 1.1-litre, four cylinder, 12-valve engine develops 68bhp of max power and 99Nm of peak torque, Maruti’s 1.0-litre, three cylinder, 12-valve unit – with 66bhp and 90Nm – provides better performance on the road. 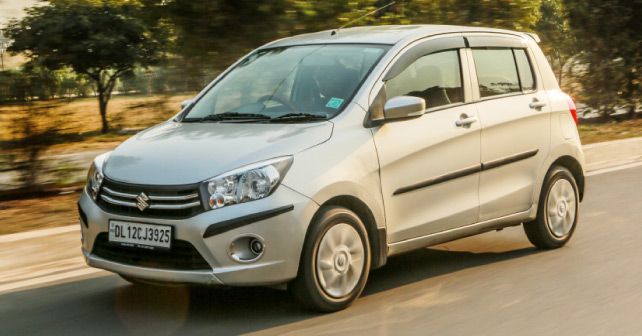 The Celerio’s steering and suspension setup also has a more direct and connected feel, which gives the driver confidence in terms of handling and high-speed stability. This is a car that is as comfortable in tight city conditions as it’s out on the open road.

The Santro’s engine, on the other hand, offers better refinement, adequate performance and makes it a perfectly capable city car. In fact, even out on the highway, it offers good performance. But I felt that the on-centre steering feel – or lack thereof – meant that you could weave the steering about at speed and it would result in no response from the front wheels. Make no mistake, the car drives well in the city and its light steering makes it easy to flick around, but on the highway the steering could do with a bit more heft and feedback in order to instil more confidence in the driver.

The Santro closes in
Hyundai once said that it would never make an AMT equipped car, because it felt that AMTs were a makeshift technology. But, the demands of our market are such that here we are with the Korean automaker’s first AMT. In an effort to get the technology to meet their standards, however, Hyundai engineers have fitted their AMT with an electronic actuator for gear changes as opposed to a hydraulic one – like in the Maruti. And, to put it simply, it works!

The Santro’s AMT transmission definitely feels smoother through the gear changes and has really taken the AMT game up a notch. That said, once you start putting your foot down and driving these cars faster, even the Santro’s system gives way to that typical head-nod associated with AMTs, as they have a tendency to pause during gear changes. The only way to get past these jerky gear changes is to be patient and lift off the throttle slightly during an upshift.

When it comes to kick-down acceleration, the Celerio performs better – owing simply to its more willing engine that delivers good performance across its rev range. The Santro’s engine isn’t as free revving and doesn’t feel as excited at the top-end of its rev range. That said, the transmission in the Santro is markedly better, and therefore offers a far more refined driving experience.

Like minded, yet poles apart
The Santro and Celerio are similar in terms of dimensions, specifications and prices, and they’re also aimed towards the same audience. But the similarities end there, for the Santro is the car that will be preferred by younger buyers, owing to its more modern nature, better interior and touchscreen infotainment system. Others will prefer it for its more spacious cabin, smoother AMT gearbox, light steering and by drawing a connect with the Santro Xing.

As for the Celerio, with its dated interior and exterior styling, it’s no longer the obvious choice. But if you’re the type who enjoys driving, the Celerio with a manual gearbox is still the one for you. And did I mention that it’s more fuel efficient too? 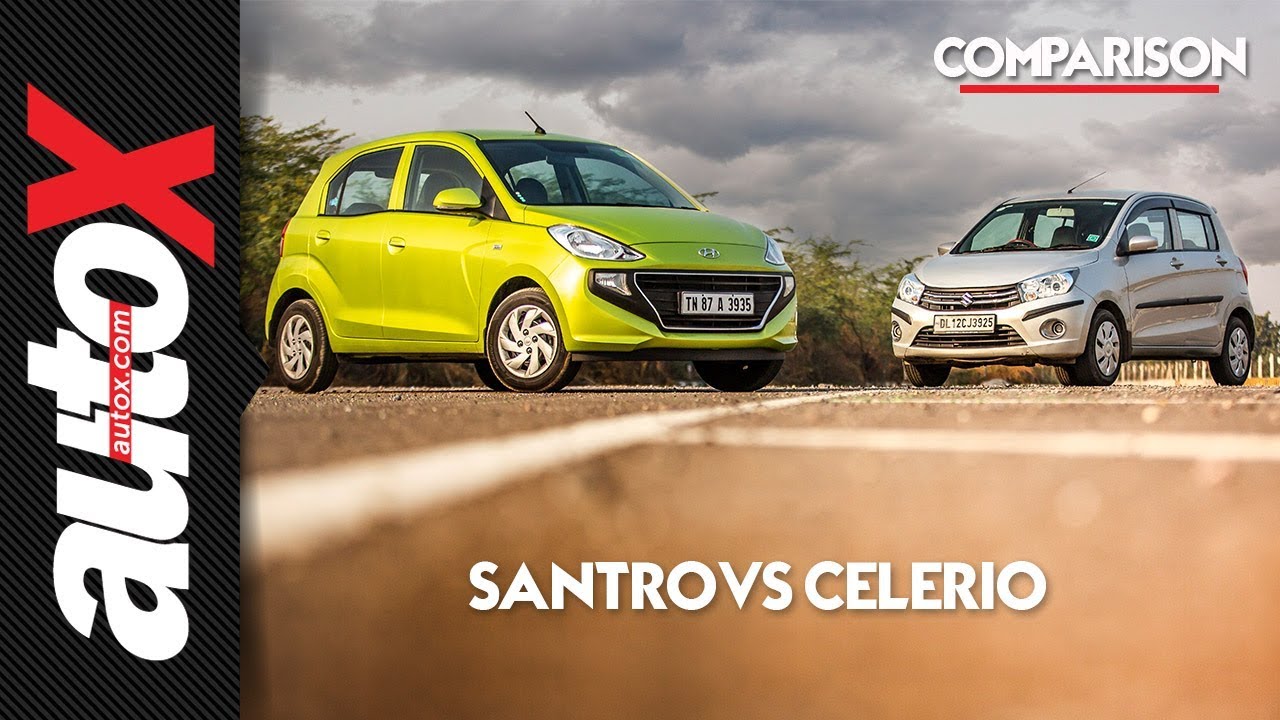 X-factor: Upmarket cabin and a smoother gearbox make it the most refined AMT car in its segment.

X-factor: Willing engine and confident driving dynamics make the Celerio fun to drive – but with a manual transmission that is.