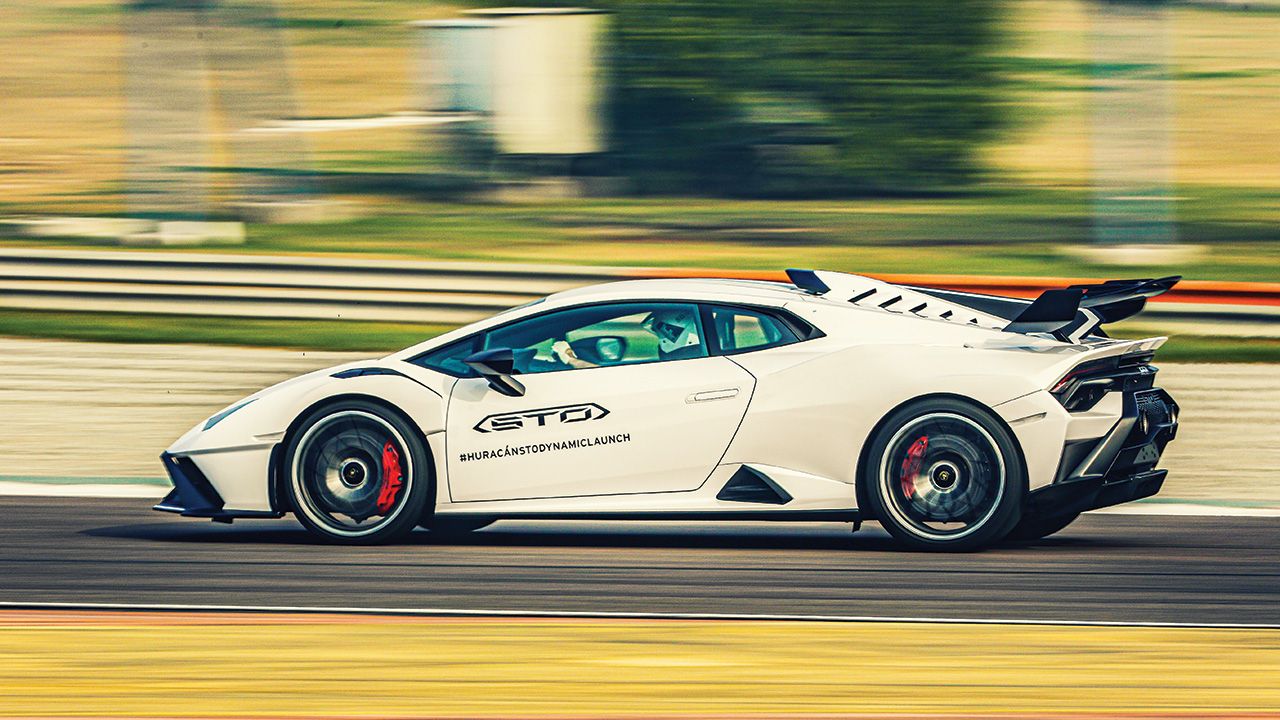 With its 5.2-litre V10 heart, the Huracan sniggers at turbos and swats away hybrids. And the STO… well, the STO simply leaves them in the dust.

It pains me to say this. Actually, at the risk of being melodramatic, it breaks my heart to say this… the STO is the Huracan swansong! And it could well be a swansong for its raging 5.2-litre V10 heart as well.

Why is this heart-breaking – after all, the Huracan has had a great run over seven good years? Let me put it this way: you wouldn’t ask the question if you’ve ever had the chance to experience the Huracan’s magical drivetrain in all its aural and propulsive glory. Sure, turbocharged engines produce more usable power lower in the rev range, and hybrids too can be used to aid in propulsion when it comes to super sports cars like these. But, frankly, there’s simply nothing like a quick spinning, high revving monster of a motor as the Lamborghini V10. The way it builds power, the linearity of its power delivery, and the ferocity of the speed it delivers all the way to 8,000rpm – all of it beggars belief. And the sound… OH MY GOD, the sound. 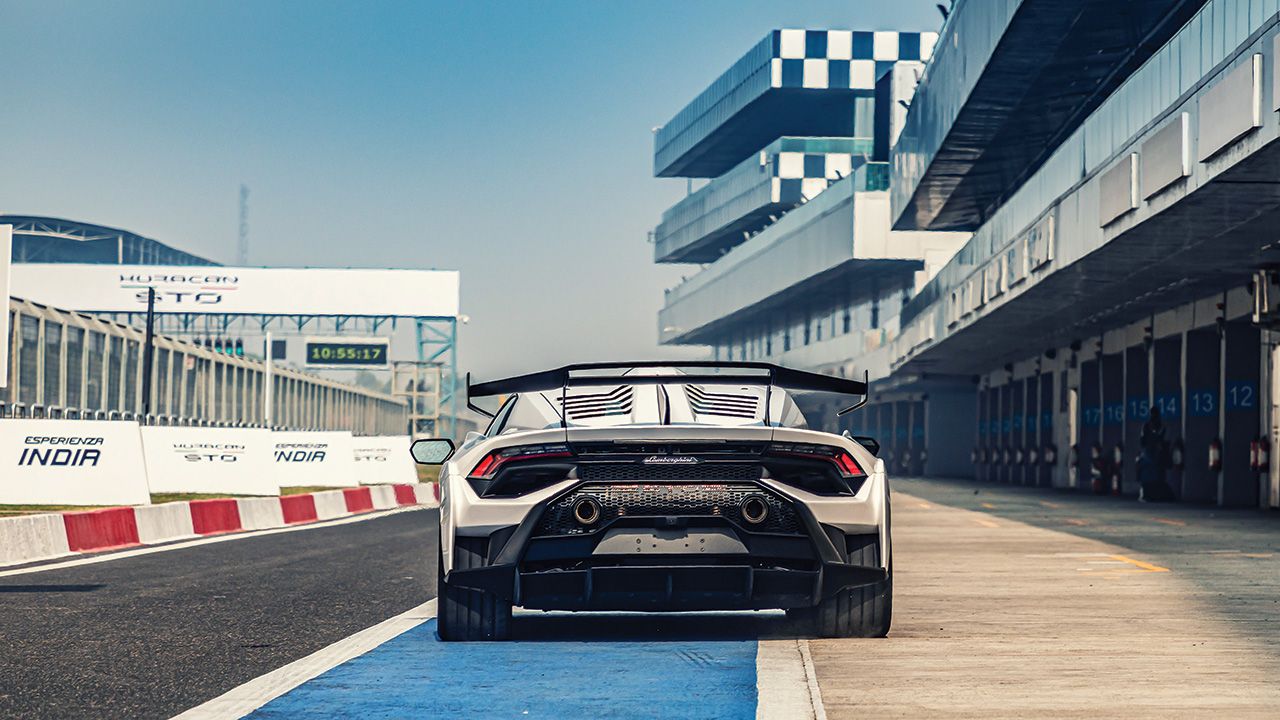 Sound is such an integral part of the appeal of this motor that the aural experience is almost as important as the inertia it generates.

If the sound of this V10 doesn’t make the hair on the back of your neck stand on end, it means that you don’t have a pulse. Actually, I take that back because this sound could stir the dead. It’s such an integral part of the appeal of this motor that the aural experience is almost as important as the inertia it generates. But let’s not diminish the importance of the inertia itself. 100km/h comes up in 3 seconds. 200 in 9 seconds. But that’s merely the result of physics when you have 630 horses and 565Nm propelling 1,339kgs of exotic materials. The front clamshell bonnet is made of carbon fibre and is called a ‘cofango.’ In fact, 75% of the body is carbon fibre. The brakes are carbon-ceramic. The wheels are magnesium. The windshield is lightened and the interior is pretty stark – so-much-so that it feels like you’re sitting on a plank moulded to fit your frame.

All of this means, however, that the STO is 43 kilos lighter than the Huracan Performante. And, with its gills, ducts and grilles, it makes even the Huracan Evo sitting next to it look, pedestrian – if that’s at all possible. And if the spec sheet isn’t enough to convince you, visually this car screams ‘race car for the road.’ It’s just got so much going on visually that you’re like a kid in a candy store the first time you lay eyes on it – what with its exhaust peeking out of the rear valence, the NACA ducts in the rear fenders, the snorkel that sits on the roof and the massive rear wing that can be adjusted to three positions, which, provide between 324 and 420 kilos of downforce depending on which setting you choose. 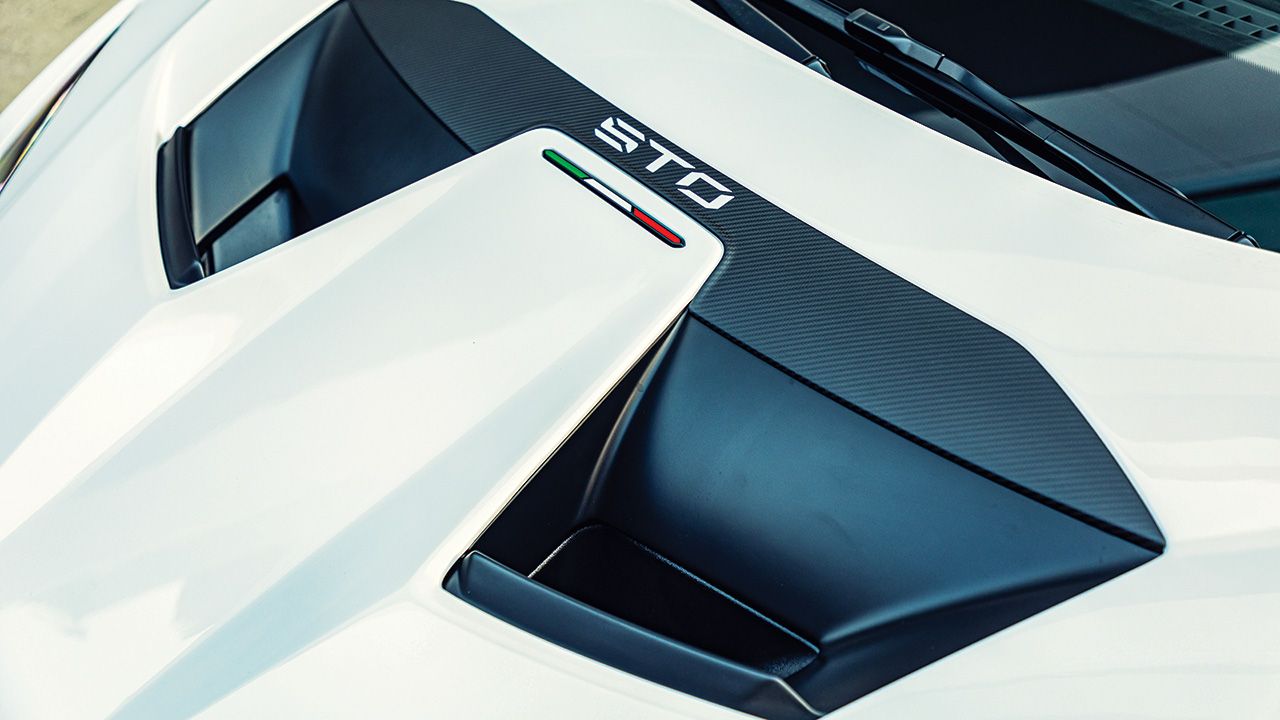 A Race Car for the Road

But, enough talk, how does all this trickery translate to the road. Well, the track to be more precise since this machine was clearly designed with only one thing in mind – lap times! After all, you can even monitor individual brake temperatures on the digital instrument cluster – now that’s pretty serious stuff. Not that you need to watch brake temps in this car – the car we tested spent two full days doing constant laps around the BIC, and not once did the brakes fade or need to be cooled down. In fact, it didn’t miss a beat over two days of attempts by drivers of different skill levels to tame this beast.

So, how did I fare you ask? Well, I headed out of the pits at the BIC following Lamborghini racer – and ridiculously gifted driver – Armaan Ebrahim in a Huracan Evo. Now, when I first drove the Evo a couple of years ago at the Sriperumbudur racetrack outside Chennai, I was amazed at how the Huracan had evolved over its lifecycle. It started life by living up to the raging bull on its bonnet. At least in my experience, it was quite a handful on track – as Lamborghinis were known to be. But, by the time it had evolved into the Huracan Evo, it had become an absolute precision machine. The steering, suspension and chassis listened to your inputs to the very last millimetre. And with LDVI (Lamborghini Dinamica Veicolo Integrata), the electronic brain that anticipates your every move, the Huracan Evo was almost telepathic. Let’s just say that it was an absolute gem on the racetrack.

Not as Intimidating as it Looks

As we exited the pit lane, Armaan didn’t waste any time – he simply put his foot down, as he’s wont to do. I responded by flexing my right foot as well, and what followed was a howl from behind me that sent shivers down my spine. Then the scenery began to blur in a manner that took me a little by surprise. It took the better part of the back straight to get to grips with the sheer speed and spectacle of the STO. I realised very quickly why the seat was so tight-fitting – I thanked God for it in fact. 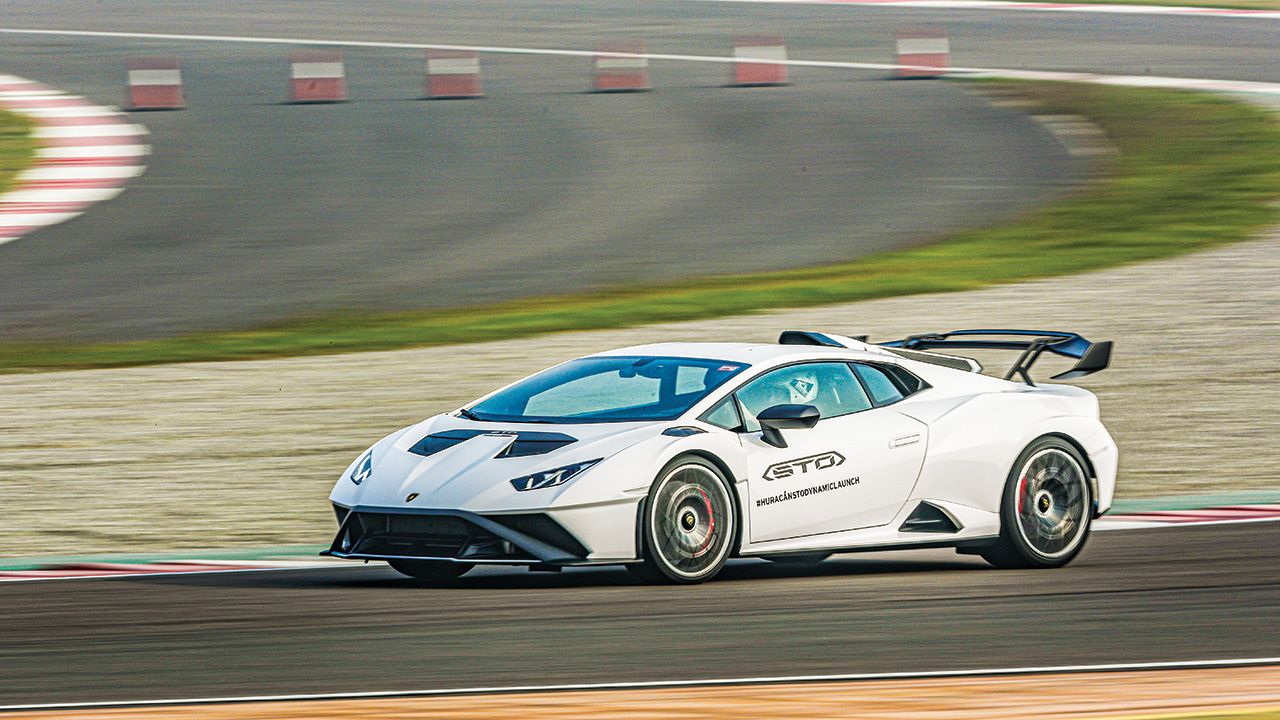 By the time we got to the braking zone for turn 4 at the end of the long back straight, I hit the brakes and almost came to a grinding halt about 50 metres before the apex – that’s how good the brakes are. After about half a lap of coming to terms with the (quite vast) performance envelope of the STO, I settled down and started to really enjoy pushing Armaan in the Huracan Evo in front of me. After all, I did have the faster car. This quickly became apparent – especially in the braking zones I was all over him. Very quickly, I could smell his brakes overheating and see his four-wheel-drive system kicking in as he was trying to power out of corners. All the while, I was using the throttle to point the rear-wheel driven STO in the intended direction at corner exits.

For a machine that’s mildly intimidating to look at, the STO was incredibly playful and friendly from behind the wheel. So-much-so that I quickly built up the courage to put it in Trofeo – Race Mode – which unlocked another wave of performance. But this drivetrain and chassis are so well matched that I could quickly extract every ounce of performance without being white-knuckled and fearful for my life – not to mention concerned about wrapping 5 crores worth of Lamborghini around the trackside Armco. And that’s the true beauty of this machine, it’s so well balanced – the engine, transmission, grip, handling, steering and electronics are so well integrated – that it’s an absolute joy to pilot. It really is a cockpit, and it has so much drama that you almost do feel like a fighter pilot. 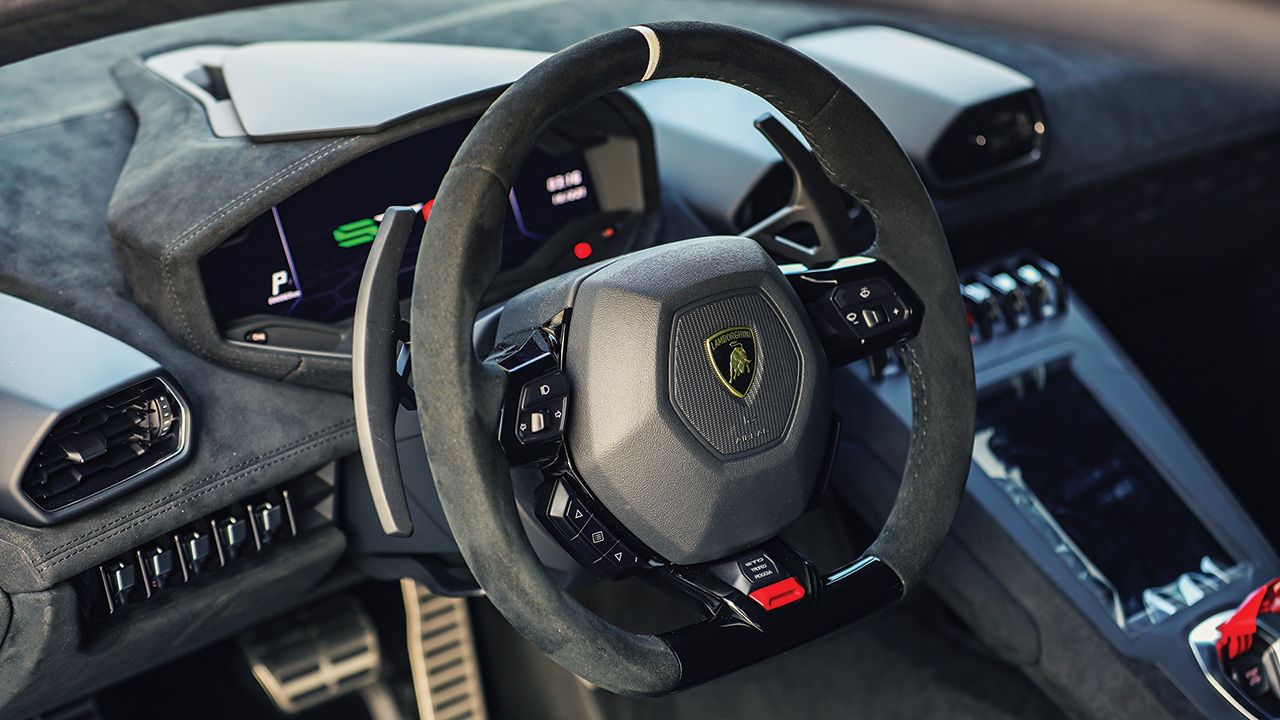 End of an Era

But what pushed the STO from ‘like’ to ‘love’ for me was that gem of an engine that builds power in such a ferocious, but linear, manner all the way to 8,000rpm. While I loved every minute of the very short time that I spent with the STO – it’s something that’ll stay with me forever – what I’m left with is a devastating sadness. Not because I can’t afford the STO, even if I were to sell most of my internal organs, but because it marks the end of an era – the last hurrah of the naturally aspirated super sports car. Thus far, Lamborghini has remained committed to the naturally-aspirated V10 and V12, but even they’ve announced that their new models will be hybridized by 2024. And while I’m sure they’ll be even faster, I just wonder if they’ll be able to match this STO for balance on the one hand, and sheer drama & acoustic appeal on the other. 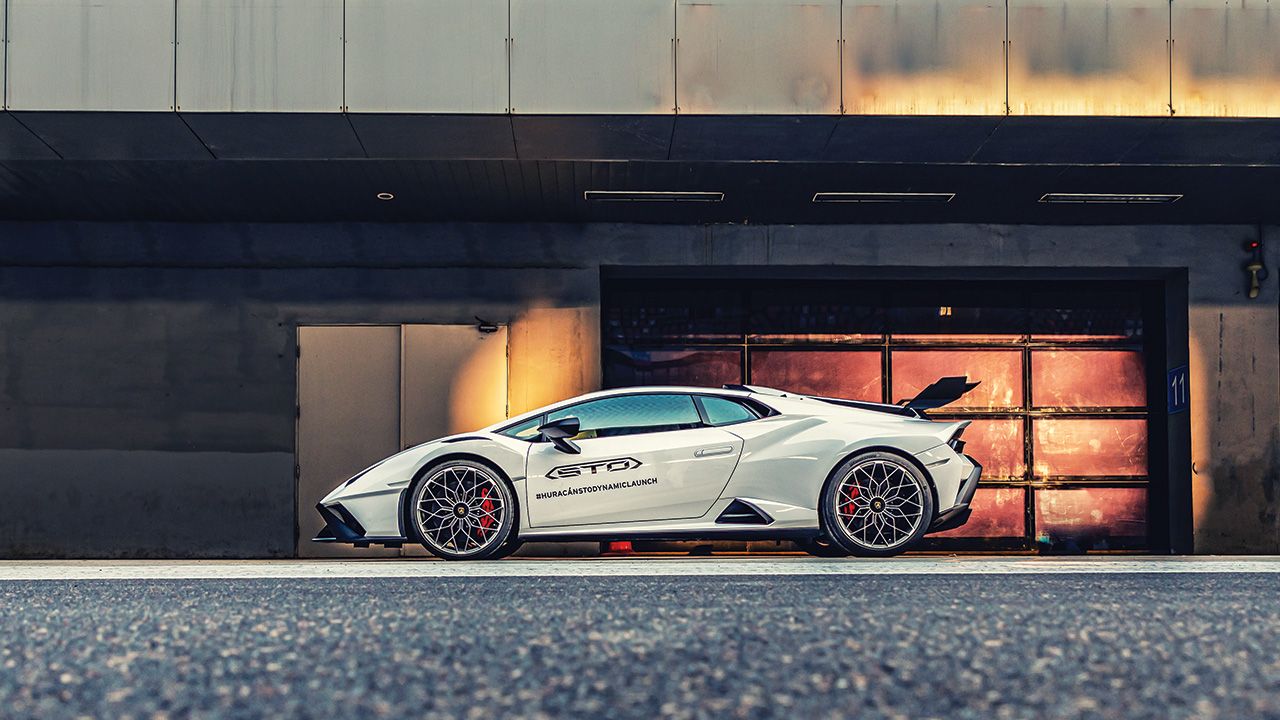 My only advice is this – if there’s some way you can experience this car, do so. If you can afford it, and you have access to a racetrack (and have even an ounce of petrol in your veins), for God’s sake please buy it – because there will never be another...

X-Factor: There will likely never be another one like it. The STO is the naturally-aspirated Lamborghini super sports car honed to perfection. 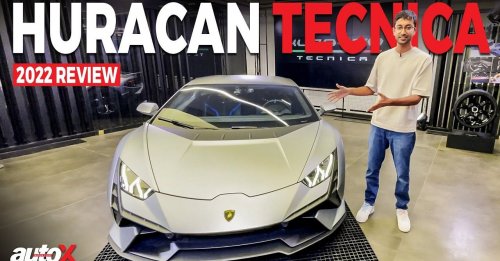 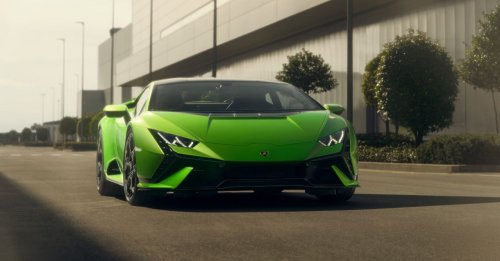