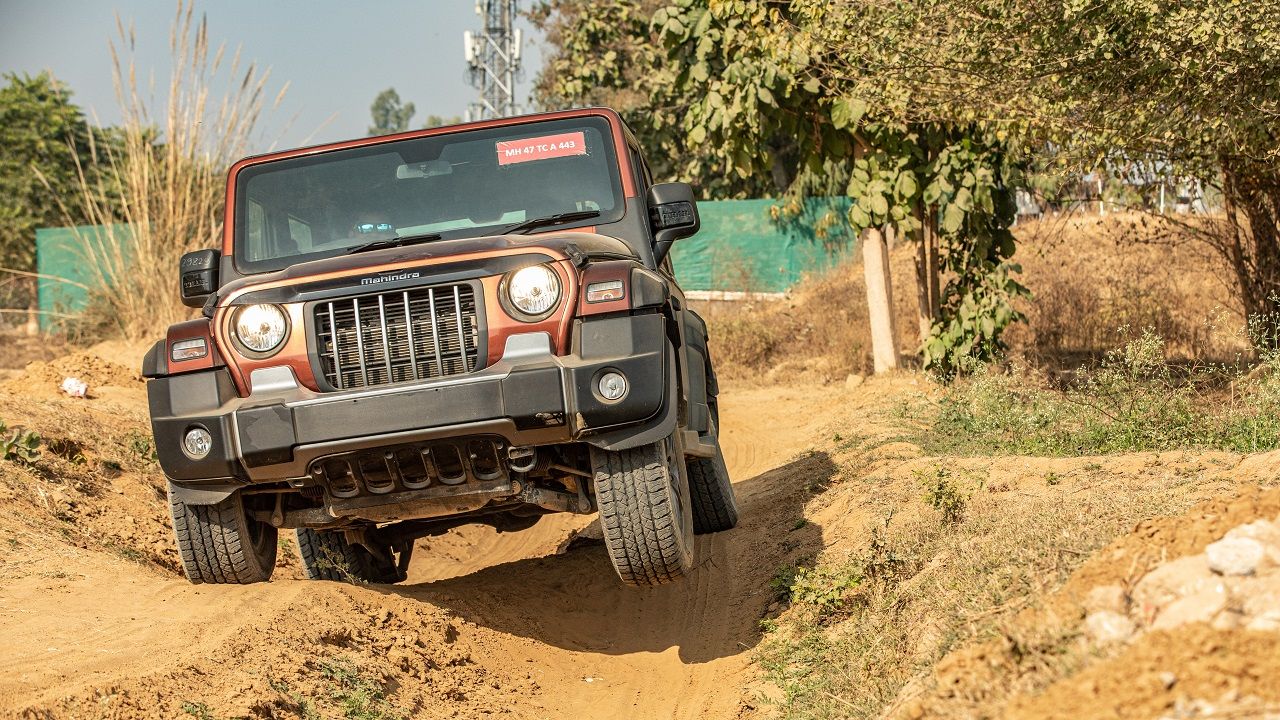 If you're an off-road enthusiast, should you consider the Mahindra Thar Petrol over the diesel version? Let's find out!

You must already know everything about the all-new Mahindra Thar. That’s because it’s the kind of vehicle that everybody seems to be in love with at the moment. And why shouldn’t you? It’s a brilliant one-of-its-kind off-roader, which is made by a homegrown manufacturer, and above all, in its latest generation, it has become better in every single way. It packs more creature comforts, looks more premium inside and out, and is more desirable now and also much easier to live with on a day-to-day basis.

With the new Thar, Mahindra has also introduced an all-new petrol engine. And that’s got us thinking – does it really make sense to go for a petrol Thar? You see, a body-on-frame off-roader like the Thar and a diesel engine go together like gin and tonic. So why would you trade the torque of a big lumpy diesel engine for the refinement of a petrol unit, especially in a Thar?

To find that out, we got our hands on a brand-new Thar Petrol, with an automatic gearbox, no less. A combination that, on paper, shouldn’t be as good as diesel or manual version of the Thar. In order to throw everything at it, we took the Thar Petrol AT to our favourite off-road park, Off-Road Adventure Zone (ORAZ) in Gurgaon.

So, is petrol Thar as good as the diesel version off-road? Time to find out…

Let’s start with the main ingredient of the Thar we have here – the 2.0-litre mStallion petrol engine, which is clubbed with a six-speed torque converter. The engine is a brand-new turbocharged unit, which delivers 150bhp and 320Nm of torque in this spec. Yes, you read it right – 320Nm. That’s 20Nm more than the diesel Thar. What’s more, the peak torque kicks in at 1,500rpm, which is 100rpm lower than the diesel, and it stays put till 3,000rpm, which is also 200rpm higher than the diesel. But that’s on paper. How does it fare when you encounter steep inclines? 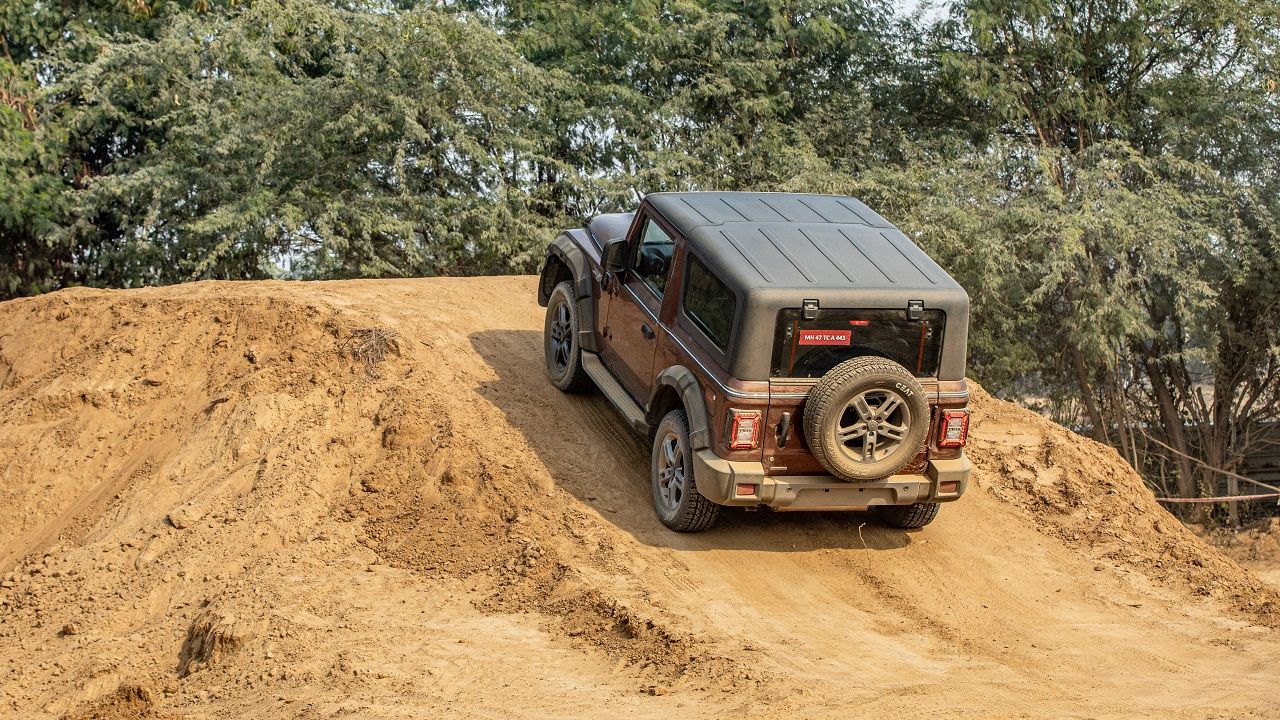 Surprisingly, the Thar Petrol can tackle steep gradients as effortlessly as the diesel. And it’s even more refined and quiet. Like a diesel, this engine has a very linear power band, and its low-end is pretty strong too. Being a petrol, it’s missing a wee bit of that low-end grunt below 1,500rpm – something that’s only evident when you encounter steep inclines. However, just a feather-light touch on the throttle pedal is enough to keep you moving ahead without any problems. The throttle response is also quite well-calibrated, and even at slow engine speeds on an incline, this petrol engine has enough grunt to push you to the other side without any hiccups. Honestly, it feels just as capable as the diesel off-road.

Drivetrain options aside, the new Thar packs some serious off-road abilities. It has an approach angle of 41.8 degrees, ramp over angle of 27 degrees, departure angle of 36.8 degrees, and a ground clearance of 226mm. It now also comes with coil springs at the rear, which replace the leaf springs of the old Thar. Couple this to 18-inch Ceat All-Terrain tyres, and you get better wheel articulation, more clearance, and even a better ride quality than the old model.

In terms of off-road kit, the Thar comes with 4x4 as standard. There are a mechanically locking rear differential and a transfer case with 2High, 4High, and 4Low modes. In 4L mode, the torque is increased by 2.48 times, and it has a crawl ratio of 42:1, which, as any dyed-in-the-wool off-roader will tell you, is quite phenomenal.

What’s new here is the inclusion of ESC, hill descent control, and BLD – which stands for Brake Locking Differential – for the front axle. In short, BLD, in conjunction with ESC, uses the front brakes of the vehicle to trick an open differential into sending more torque to the wheel with more traction. For instance, if the front right wheel has lost traction, and the left wheel hasn’t, an open differential continues with 50:50 torque split for both wheels. However, the major flaw of an open differential, in such situations, is that the torque follows the path of ‘least resistance’. It means that it will send only the amount of torque that’s required to spin the wheel with least traction. As a result, the wheel with more traction receives the same amount of torque, which is of very little help. This is where BLD comes to the rescue – it detects when one wheel is spinning faster than the other and applies the brake to the spinning wheel. With the spinning wheel facing resistance, the differential is forced to send more torque to both wheels and this, in turn, helps you get out of tricky situations. 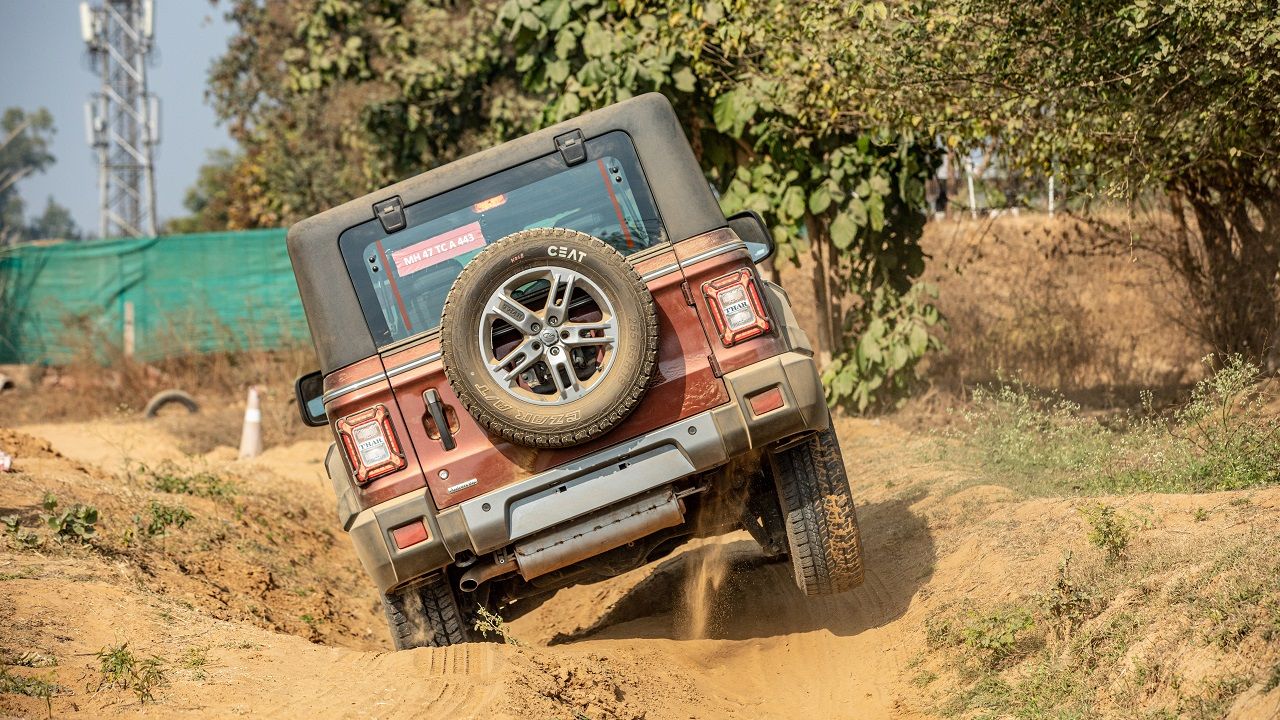 Truth be told, we never really managed to test the Thar to its full capabilities. At ORAZ, we ensured that we put everything to test, but the Thar just went over every obstacle like a piece of cake. By the end of the day, we were running out of activities, and yet the Thar had barely gotten into trouble. Not even once did it get stuck or fail. Honestly, we threw everything at it – chicken holes, articulation ramp, sand patches, steep inclines, side inclines, and what have you, but each time the Thar passed these tests with flying colours. For casual and even hardcore off-roaders, the Thar, even in its petrol automatic disguise, has enough to keep you entertained.

We had our doubts about the AT gearbox in the beginning, but it’s tuned perfectly for all kinds of driving. In 4-Low, with the manual mode selected, the gearbox doesn’t override the controls, meaning it doesn’t upshift on its own in 1st and 2nd gear. This is a well thought out touch, especially when you encounter a steep incline or find yourself stuck in a tricky spot.

What could have been better? The hill descent control was tricky to activate, and the steering feels a touch too light at times. The radiator is also mounted quite low, so you’ve to be careful if you go over an uneven incline.

Back on the road

Apart from being brilliant off-road, you’ll also love this new engine gearbox combo in daily driving. It has superb driveability and it's effortless – the automatic gearbox does a pretty good job and that’s quite surprising, to be honest. The engine is peppy and powerful, but it doesn’t rev like a conventional turbo petrol. In fact, it feels more like a diesel, with all the shifts taking place below 5,000rpm, even in kick-down. The most impressive bit is the refinement of the drivetrain – it’s simply superb.

The effortless nature of the Thar Petrol AT means that you can drive it every day. It’s a shame though that Mahindra hasn’t bothered to find some space for a dead pedal in here, for this is an otherwise very comfortable daily driver. 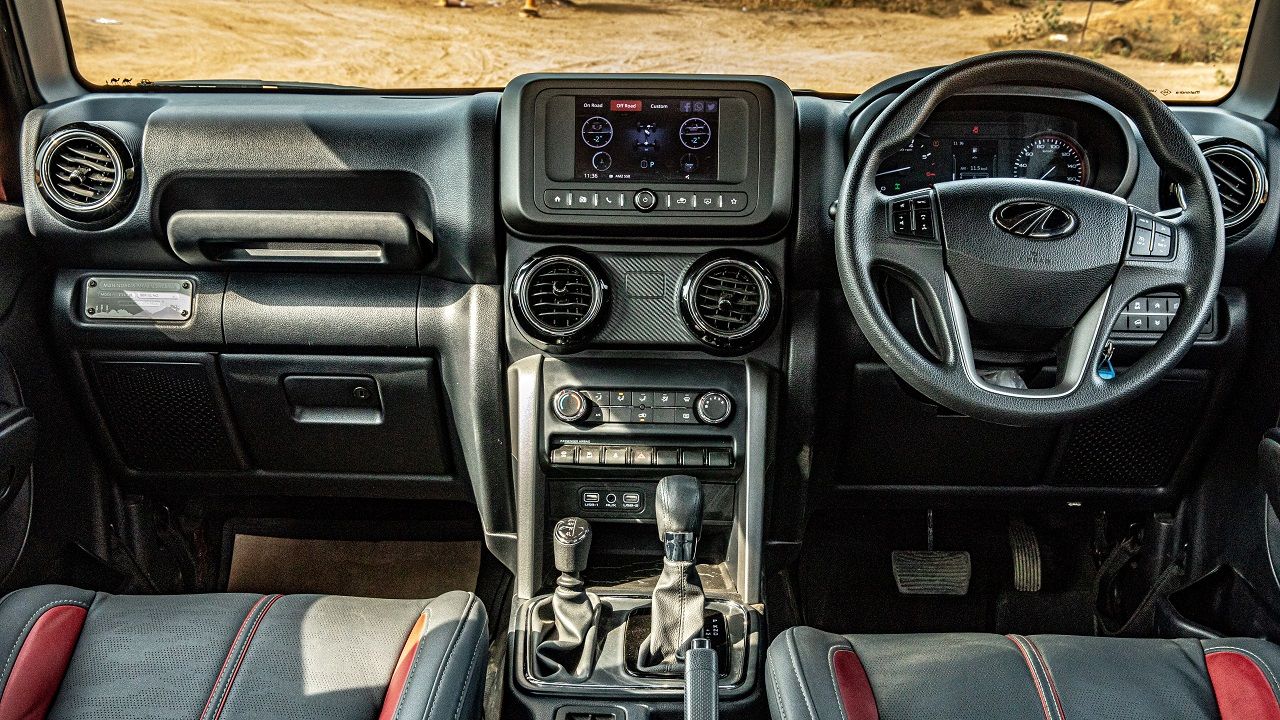 The engine performance is another highlight. The mStallion motor has enough grunt to hurtle the Thar to high triple-digit speeds in no time. However, being a body-on-frame SUV, the brakes, steering and suspension have their limitations, and that’s quite apparent after you cross 120km/h. That said, you can cruise comfortably at 100 – 110km/h. Not to mention, the Thar Petrol drinks a lot of fuel – it returned 6.4km/l during this road/off-road test!

The ride quality is much better than the previous model, but that’s not to say it’s as comfortable as a Hyundai Creta. Sure, you can dismiss potholes and bad roads with your eyes closed, but it’s not going to be plush in any way – it’s rather bumpy. Having said that, it’s acceptable, and you can live with it – I know that I happily can.

Should you buy the Thar Petrol?

Yes, why not! After driving it over virtually everything that I could think of, I was hugely impressed with the Thar Petrol AT. Would I buy it over the diesel? Well, that sounded like a tricky question at first, but I realised that it's not. You see, first and foremost, diesel vehicles today have a short life, especially in Delhi-NCR, where you can only register them for 10 years. In the coming time, I have a hunch that authorities will double down on diesel engines with even stricter laws, making the life of diesel car owners even more difficult. With all this in mind, I believe the Thar Petrol makes more sense. 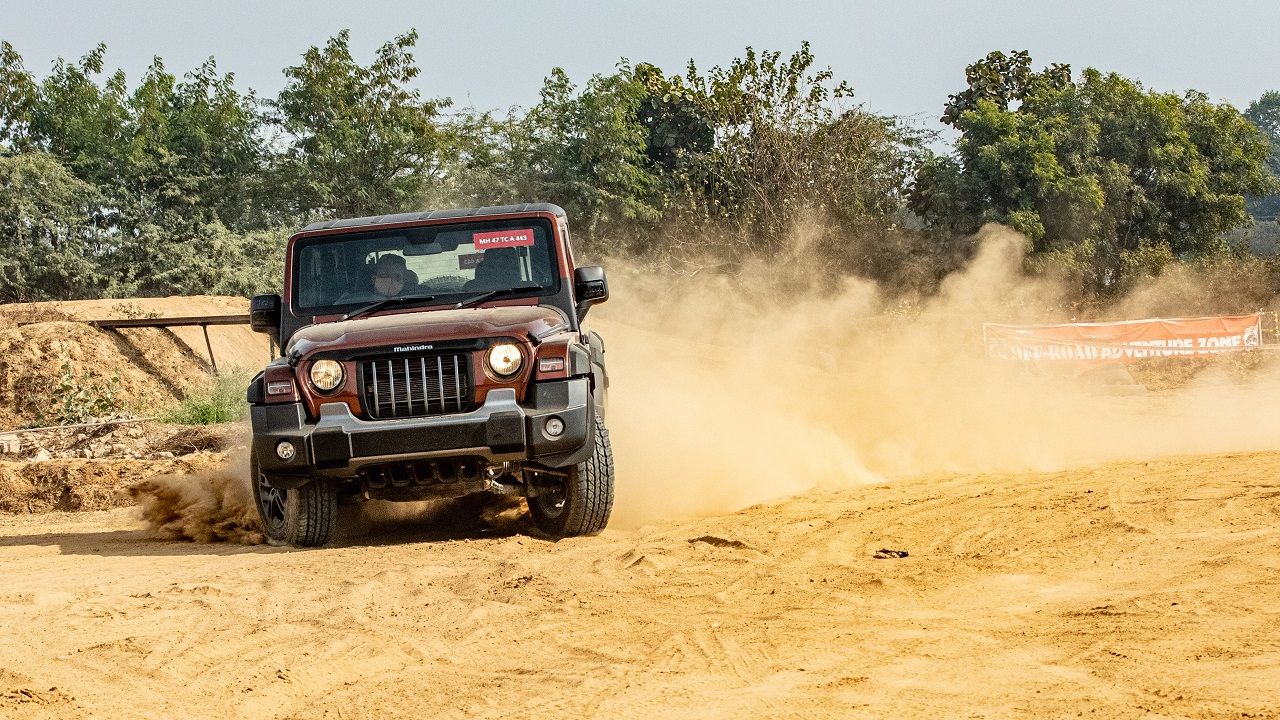 Plus, the best thing about the petrol version is that you don’t really miss the diesel in a Thar – except when it comes to paying fuel bills, perhaps. On all the other counts, it’s just as good and offers even better performance and refinement levels than the diesel version.

All things considered, I feel the Thar Petrol AT is the most complete variant in the range and, therefore, it’s my pick of the lot. 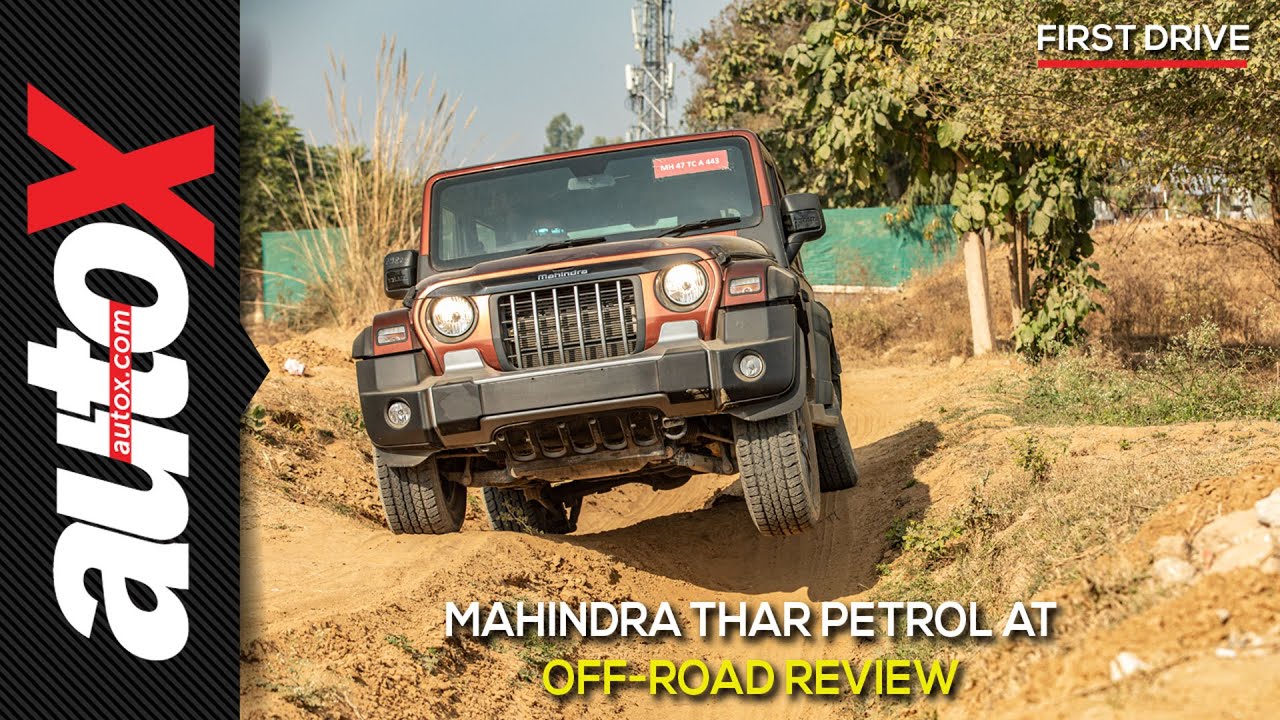 what is the mileage of the Petrol Thar on regular roads, in a non-offroading city/highway situation which should be the bulk of the useage? Its important to know this.

The engine & gearbox have been tuned for performance instead of efficiency, and it's quite evident on the road. Even with careful driving, we managed to get 7-7.5kmpl at best.