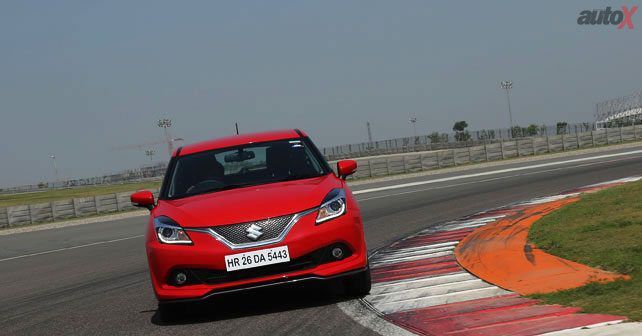 Maruti Suzuki has introduced their first ever performance oriented variant of a car that comes with a purpose built engine. We get to grips with it at the Buddh International Circuit to put the new Baleno RS through its paces.

Somewhere on the distant mountain roads of Himachal the sweet sound of a petrol engine revving to glory emerges from obscurity. Soon after a bright red Maruti Suzuki Zen whizzes past around a wide uphill bend with the tyres finding some sort of imaginative grip in the driver’s head. You can notice the driver wrestle with the steering wheel while trying to control an insane amount of body roll, he gives it a final boot full of throttle while exiting the corner as the engine sings to its 6,000 rpm redline once again.

My association with India’s very first hot hatchback is a love affair I am still not over with. For that red Zen is now thirteen years old and continues to be in my possession. It was the first Indian car to come with an all-aluminum (head and block) engine and was nothing short of a phenomenal pocket rocket. Back in the early 90s when the Zen was originally launched there was almost nothing as fast on our roads owing to its mere 765kg kerb weight, a very rev happy engine and a beautifully balanced chassis.

And on paper at least, it looks like Maruti Suzuki is looking to recreate history here with the new Baleno RS. Weighing in at 950 kilos and packing in a contemporary petrol engine featuring direct injection and turbocharging, on paper at least the Baleno RS seems to be going the right way.

But you see it’s not that simple. Back in the day, the Zen quickly became a cult car with enthusiasts fettling with the engine, even pumping nitrous oxide thought them or swapping bigger engines under the hood altogether.

So will the Baleno RS become a cult car? Will it appeal to enthusiasts the same way as some of Maruti’s iconic cars of yore? Does it have what it takes, that intangible factor that tugs at the heart? Well, that’s what we are here at the Buddh International Circuit to find out. 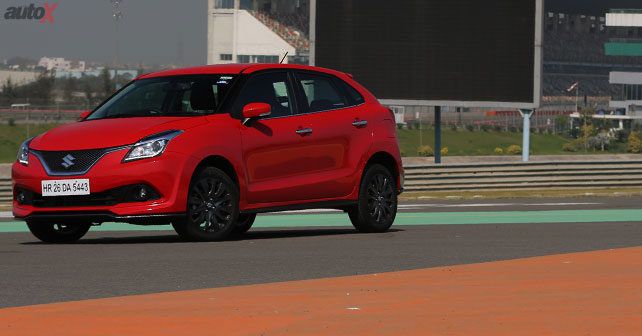 On the face of it, the Baleno RS comes with rather subtle styling cues to set it apart from the standard car. The front bumper has more aggressive design for the air dam and gets a lip spoiler, the head lamps get black inserts, the side profile remains identical as the standard car’s apart from the new black alloys and side skirts. The rear bumper is significantly different with a black plastic section lower down. But apart from these changes and an RS badge there is not much else that distinguishes it to identify with added fire power under the bonnet. 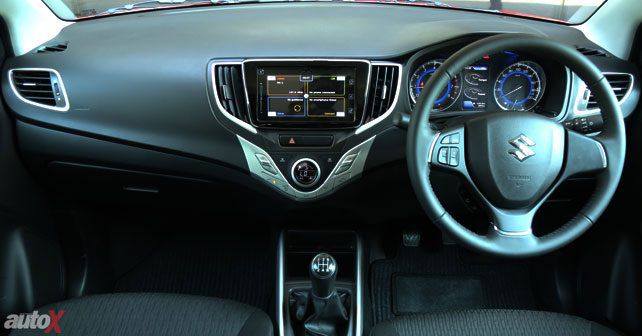 Get inside the car and apart from RS branded foot mats there is nothing else here to indicate about its intentions. And here in lies an area of disappointment for me personally. If I am buying a performance oriented hot hatch I expect the car to feel just a little more special, a little different perhaps from the standard car. Maybe just a different steering wheel and seat covers. Essentially something to tell you that this is different, it’s special! Otherwise you get the usual host of equipment including form of the brilliant CarPlay system featuring voice commands, sat-nav and reverse camera display in the Baleno RS available only in the top-spec Alpha trim.

Anyway, coming back to the heart of the matter. This new engine that we are talking about is Suzuki’s all-new 1.0 litre BoosterJet petrol engine. Essentially it is a heavily reworked and reinforced version of Suzuki’s three cylinder K10 petrol engine to handle the added oomph from the new age tech. As a result it now gets an intercooler as well. 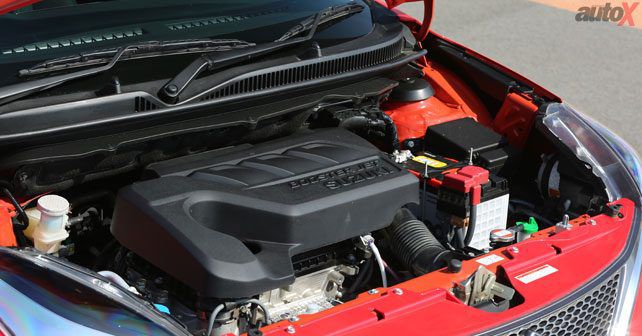 From the moment you fire up the engine, the familiarity of refinement from the motor is evident, it is absolutely quiet and vibe free. Slot the five-speed manual gearbox into first and as you crawl ahead it’s really not that different from the 1.2 naturally aspirated motor in the standard Baleno petrol. But from the moment you get to 1,700 rpm and onwards you instantly realize that the car drives differently. Although this is sort of the only time you feel that this is a turbocharged engine. Once peak torque of 150Nm kicks in at 1,700 rpm and holds steady to 4,500 rpm you can feel the added grunt but it’s a very linear curve and from around 2,000 rpm it feels like a naturally aspirated motor. Of course being a petrol engine it is happy to rev higher, and progress becomes more brisk after 3,000 rpm but it’s not like a traditional shove up your back you get from a turbo engine. Instead, as mentioned earlier power delivery is carried out in a linear manner and the engine feels eager to rev. But as max horsepower of 100bhp is churned out at 5,500 rpm and the rev limiter absolutely cuts off power at 6,000 rpm in an all-too sudden manner, its best to find that ideal upshift moment before the limiter comes into play. As the revs rise, the engine note, of course, gets louder but it’s not what you would call sporty. Also, vibration levels are a little too high at this point considering the otherwise smooth nature of the unit. And if I were to be honest, the eager K10B motor in smaller Marutis sounds better and feels more refined at full chat. And here in lies a problem with the new 1.0 BoosterJet engine. While it does pack in more power than the bigger 1.2 litre engine, it does not exactly pack in an exhilarating experience. And even though this is a light car you need more power and you need a nice engine note to add to the whole experience of a fast car, which the Baleno RS is made to be. 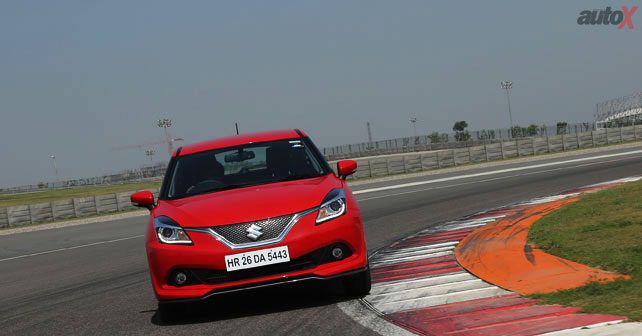 As far as hot hatchbacks are concerned though straight line speed is only one aspect of the story. And since we were on the controlled premises of the BIC we could find out what this car is really capable of on the handling front. Having clocked in an indicated top speed of 173 km/h on the back straight it was now time to deal with the fast twisty sections of the track from turn 5 onwards. And on this account I am happy to report that the Baleno RS performed in a rather decent manner. Braking force from the 14inch (front) and 13 inch (rear) disc brakes - standard Baleno gets drum brakes at the rear - was good and they help the car shed speed quickly when you need to. Once you have the steering angle set and have made the necessary directional changes to prepare the car for the bend ahead, you can gently get back on the power again as the car leans in and slides into the turns to carry a nice little slide into the kerbs before mechanical grip is gained once again and you can power your way through. This was so much fun that I could have done it all day long. Yes, there is a fair amount of body roll but it’s very easy to balance this car around fast bends. So much so that I even managed to get the car fairly sideways at turn 9 and then elegantly collect the rear to proceed to the parabola. Some mornings are just better than others I tell you!

As for the five-speed manual gearbox, it’s a nice unit that allows you to carry out light and precise gear changes at any moment to ensure you can always work that engine to keep it on the boil when you need it.

So there you have it, the Baleno RS sure delivers on most counts as a performance oriented everyday car and I’m sure it will be nice to drive on the road as well, but it just needs to be a little more edgy and a little more exciting to wear the coveted hot hatch crown on a race track.

And while that is a fitting verdict, I’ am not done rambling yet. For this engine is actually capable of developing more power. So watch enthusiasts and motorsport veterans buy it, fettle with the internals and ECU, fit a performance exhaust, lower the car, fit wider wheels and stiffen the suspension. And very soon hopefully we will see the Baleno RS fit seamlessly into the Indian motorsport scenario! 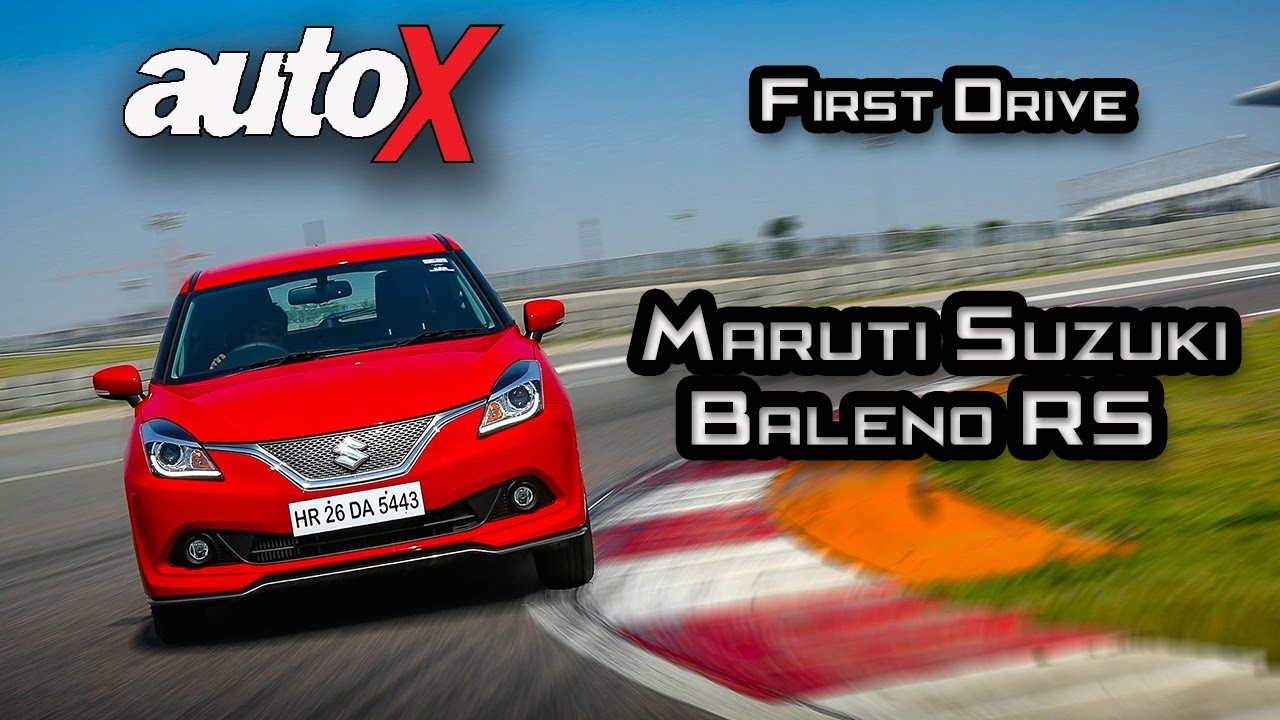 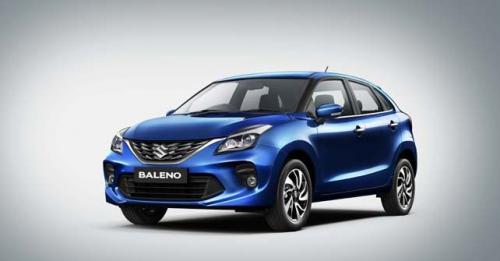