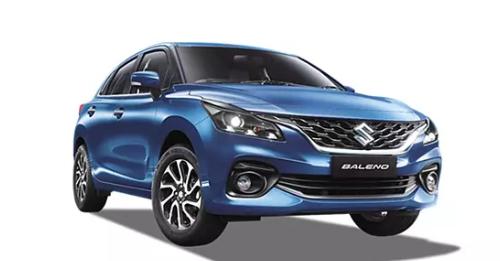 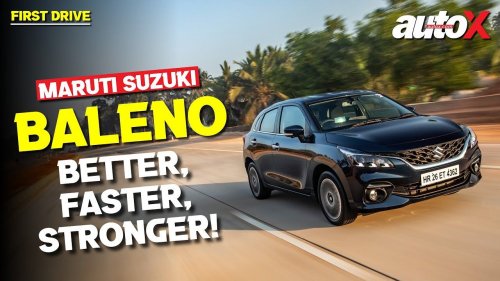 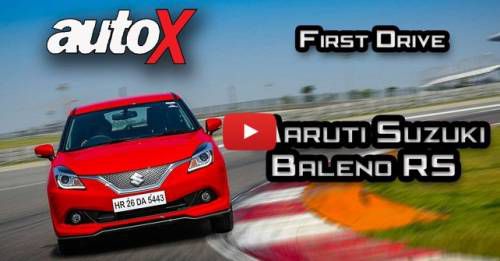 The new Maruti Suzuki Baleno features design updates over its original look. The front fascia is updated with an all-new bumper and headlight setup and also gets an eye-lid style lip on top of the car's headlights that extends across the front end. The Baleno gets a wider front air dam and sleeker headlights with integrated DRLs that extend to the sides. The sides are shod with new dual-tone alloy wheels, and the rear fascia looks wider with all-new taillights and a redesigned bumper.

The Baleno's cabin received updates in the form of redesigned air-conditioning vents and an all-new infotainment touchscreen in the centre. The car gets a sportier flat-bottomed steering wheel as well. The interior of the Baleno gets a dual-tone colour scheme of blue and dark grey. Other interior updates include a new instrument cluster, steering wheel integrated controls, cruise control and a start-stop button to name a few.

The Maruti Suzuki Baleno is powered by an updated version of its K12B and K12C engines that initially featured mild-hybrid tech. Maruti Suzuki has done away with the options and the mild-hybrid tech, and the new Baleno is powered by a K12N 1.2-litre DualJet petrol unit. This engine is capable of 90PS of power and 113Nm of torque. Gearbox options include a five-speed manual and a five-speed AMT gearbox. The new engine offers better fuel economy with 22.35kmpl for the manual gearbox and 22.94kmpl for the AMT. The mild-hybrid tech has been removed and the Baleno now gets idle start/stop tech.

The 2022 Maruti Suzuki Baleno feature list is vast compared to its outgoing variant. Maruti Suzuki has ensured significant features in the Baleno 2022 to keep it up with its premium hatchback tag. New features on the Baleno 2022 include external features as well. Such as the new LED fog lamps integrated into the new bumper, and Nexa’s design language based three-block DRLs integrated into the car’s headlights. On the inside, the car gets segment first features such as a HUD (Heads Up Display) and a new 9-inch infotainment screen with Smartplay Pro+ software and Amazon Alexa integration. The system also enables the Baleno with connected car tech and voice commands. Additional features include a new 6 speaker sound system with Arkamys software. Also on offer is a 360-degree camera array and continuing features such as auto climate control, Apple CarPlay and Android Auto connectivity, cruise control, keyless entry and more. Safety features receive an upgrade as well with six airbags, ESP and hill hold (AMT variants), ABS with EBD, ISOFIX child seat mounting and more.

At the latest edition of the Auto Expo, Maruti Suzuki unveiled the Fronx crossover SUV which is based on the manufacturer's popular model, the Baleno. We bring you a comparison of the Maruti Fronx....

The Maruti Suzuki Baleno Coupe SUV has been spotted ahead of its India launch. The new spy shots of the upcoming model unveil a few design improvements as compared to the previous.... 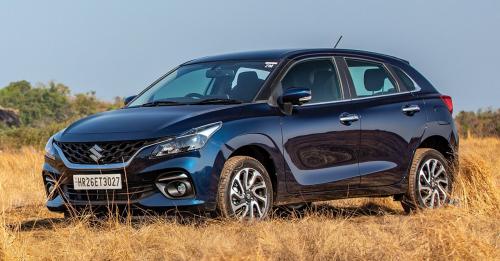 The Maruti Suzuki Baleno has become the nation's best-selling hatchback in November 2022. Read below to know about the sales performance of a few more hatchbacks that managed to stay on the list of....

What is the current on-road price of Maruti Suzuki Baleno?

Currently, the Maruti Suzuki Baleno is priced at Rs. 6.49 Lakh for the base Sigma MT trim.

What is the price of the top variant of Maruti Suzuki Baleno?

Which year did Maruti Suzuki introduce the Baleno in India?

The Maruti Suzuki Baleno, in its current form, was introduced in 2022 .

What are the top competitors of Maruti Suzuki Baleno?

The Maruti Suzuki Baleno goes up against the Hyundai i20 and Volkswagen Polo in the Indian market.