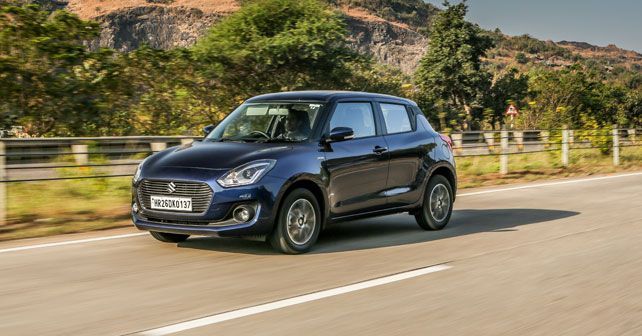 Maruti Suzuki’s icon has been given a full makeover. So, has it resulted in heresy or has Maruti hit the nail on the head – again? We drive the eagerly awaited brand new model to find out.

The image of India’s largest carmaker took a 180-degree turn in 2005, the day that the first-gen Swift was launched in the country. Till then, the image had been strictly no-nonsense – staid even! It suddenly became funky and stylish – sporty even – in one fell swoop.

It was the start of a new era, an era in which a hatch could be more than just transportation – it could be an extension of one’s personality. The Swift was almost like a Mini for the working-man or woman. It was edgy and different, and it sold like hotcakes! 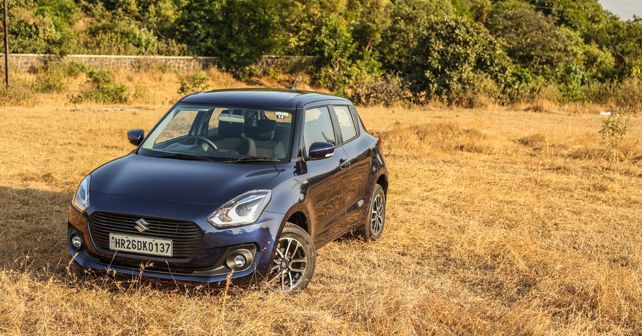 So, when time came to refresh it in 2011, Maruti Suzuki didn’t do much – just a slight nip and tuck. Because, well, why mess with a good thing? It goes back to that old adage: ‘If it ain’t broke, don’t fix it.’ But, with the latest generation, they’ve left absolutely nothing untouched. The Swift, which felt like it was ageing of late, has been completely revamped – inside and out.

At its heart is Maruti Suzuki’s Heartect platform that also underpins the Baleno and, of course, the Dzire. In its transformation, the Swift loses 80kgs over the previous gen – which should ensure that it remains as agile as ever. But, before we get into that, we should address the way it looks – because I happen to think that it looks like a million bucks. At the front, it appears to be inspired by the Jaguar F-Type sports car. And, if you’re going to take inspiration, you may as well be inspired by some of Ian Callum’s best handiwork.

On the whole, though, the design of the Swift looks very cohesive. The upright A-pillar and floating roof remain. But now the rear door handle lives in the C-pillar, which gives the Swift a genuine coupe-like stance in profile. At the rear too it looks equally stylish, with a distinctive LED taillight pattern. We drove the fully loaded Zdi+ for the most part, and it came with a set of very distinctive alloys as well as LED projector headlights – all of which add to the visual appeal. I never thought I’d say this about a Swift, but it’s actually a very pretty car – quite exuberant in bright red, and quite grown up, mature even, in the deep blue of our test car. 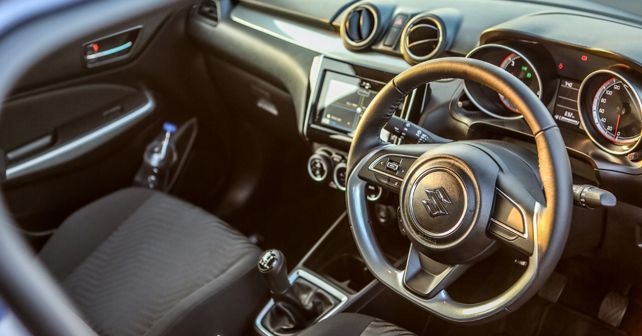 On the inside too, the design appears very well thought out. The cabin is clean, functional and a nice place to be. There are some hard plastics of course, but it’s very well put together on the whole. You sit facing a pair of clear hooded gauges that have a fiery orange glow. You’re holding a sporty three-spoke flat bottom steering wheel, meanwhile the side bolstering of the seat holds you snugly in place, and all the controls fall perfectly to hand. Perfect! Well almost, it would have been nice if the steering column was telescopic. At present, it adjusts for rake but not reach. Other than that, finding a near-perfect driving position is a cinch. The question is, what happens when you actually get going?

Well, for starters, the powertrain is decidedly familiar. The 1.2 K-series petrol and 1.3 Fiat-derived turbo-diesel have been carried over from the previous generation. The petrol produces 82bhp at 6,000rpm and 113Nm of torque at 4,200rpm, while the diesel generates 74bhp at 4,000rpm and 190Nm at 2,000rpm. Fuel economy has improved to a claimed 22km/l in the petrol and a staggering 28.4km/l in the diesel. The reduced weight plays a part of course, but so does the fact that the new Swift is more aerodynamically efficient than before. The new Swift also comes with the option of Maruti’s AGS (Auto Gear Shift technology) – their automated manual transmission. We drove only the five-speed manual versions of both the petrol and diesel, and I have to say that both cars actually feel quite different on the road when compared with the previous gen Swift.

Refinement levels are vastly improved. In fact, the ride quality – thanks to the new platform – is hugely impressive. No road imperfections, or speed breakers, upset the chassis at all – no matter what speed you’re doing. On the road, the Swift actually feels quite similar to the Baleno. 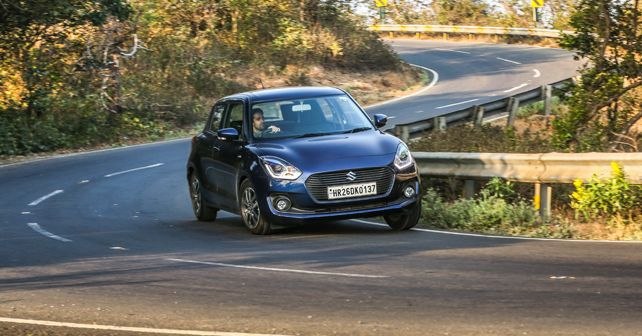 In fact, it’s the Baleno that appears to be the Swift’s closest competitor. They’re based on the same platform of course, so size-wise they’re actually quite similar. The Swift’s wheelbase has increased by 20mm to 2,450mm, while the Baleno is 2,520. Width is 1,735mm versus 1,740mm in the Baleno – all of which means that there’s actually quite a bit more space in the cabin of the Swift as compared with the previous generation model. The rear seat has been set lower, so headroom has also improved by 24mm – and the rear seat-back angle has been relaxed by a few degrees to make it more comfortable. Boot space, meanwhile, has grown by 28%. So, from a practical point of view, the Swift makes quite a case for itself. But how does it fare in the fun-to-drive factor – after all, that’s where the Swift cemented its iconic reputation?

Well, Maruti has made a concerted effort to smooth out some of the Swift’s hard edges – figuratively and literally! Turn-in is nowhere near as sharp as it used to be, so the Swift isn’t as keen to dart into corners as it used to be. That said, the chassis, inherently, is extremely capable – so you can be very aggressive with your steering inputs. Grip levels are good, despite a set of 185/65 R15 Bridgestone Ecopia tyres that are more suited to economy than performance. In the ghat sections leading up to Aamby Valley early in the morning, in time for sunrise, the Swift is still a great deal of fun on empty mountain roads. But it needs more power!

The petrol is as smooth and free revving as ever, but it struggles to pick up the pace unless you really rev it. The diesel, meanwhile, has a much better mid-range – as always – and now they’ve even made the power delivery far more progressive so you don’t notice the turbo lag as much, but there’s still no grunt whatsoever under 2,000rpm. So-much-so that I had to downshift to first gear while climbing the tight hairpin bends to Aamby Valley. The chassis is so inherently capable that it’s simply begging for more power.

I would implore Maruti to truly consider bringing the full-fat Swift Sport into the country – with its 1.4-litre turbo-petrol producing 140bhp. It would have the same kind of impact on the Maruti line-up that the introduction of the Swift had in 2005. It would demonstrate that Maruti is a mature carmaker willing to take risks to cater to the interests of a small group of enthusiasts and opinion leaders – even if the business case isn’t entirely straightforward. After all, they’ve got plenty of other models to chase after volumes.

Anyway, sermon over, back to the Swift that we’re driving. Despite the fact that it’s quite a bit lighter than the previous gen – in fact the doors feel noticeably light – it’s actually safer than before. This is thanks in part due to the use of 40% high tensile steel under the skin. Having visited Maruti’s new 600-acre R&D facility, during which we witnessed a 56km/h frontal offset crash test of the Ignis – in which it performed admirably – I’m a complete believer when it comes to Maruti’s claims of structural integrity. The new Swift comes, of course, with dual airbags, ABS and EBD as standard.

At triple-digit speeds, the Swift is extremely stable on the highway. NVH levels are pretty good too. There’s a little bit of wind noise, but other than that this is a very comfortable car in which to cruise on the highway. Which brings me back to my point of the Baleno being the Swift’s main competitor – and, therefore, initiating cannibalisation on a potentially greater scale than current exists within the Maruti Suzuki fleet. The reverse argument is that the two models coexist just fine at present, and the Swift has simply gone on to become far more refined and grown up than before. 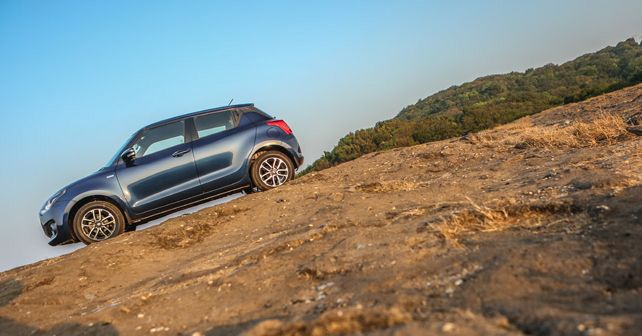 If you always loved the Swift for its sporty character, you may have to wait until a slightly more driver-focussed variant is launched later in the year. The Swift Sport, unfortunately, seems unlikely, but Maruti will nevertheless likely launch a hotter version of the Swift in the coming months. In the meantime, if you want a car that is very pretty indeed, extremely well built, comfortable and refined, you simply can’t go wrong with the new Swift. It’s just that good. Again!

The new Swift will be launched at the Auto Expo in early February, but bookings are already open – so you better make a beeline to your nearest Maruti dealer to avoid months of waiting for the variant of your choice. 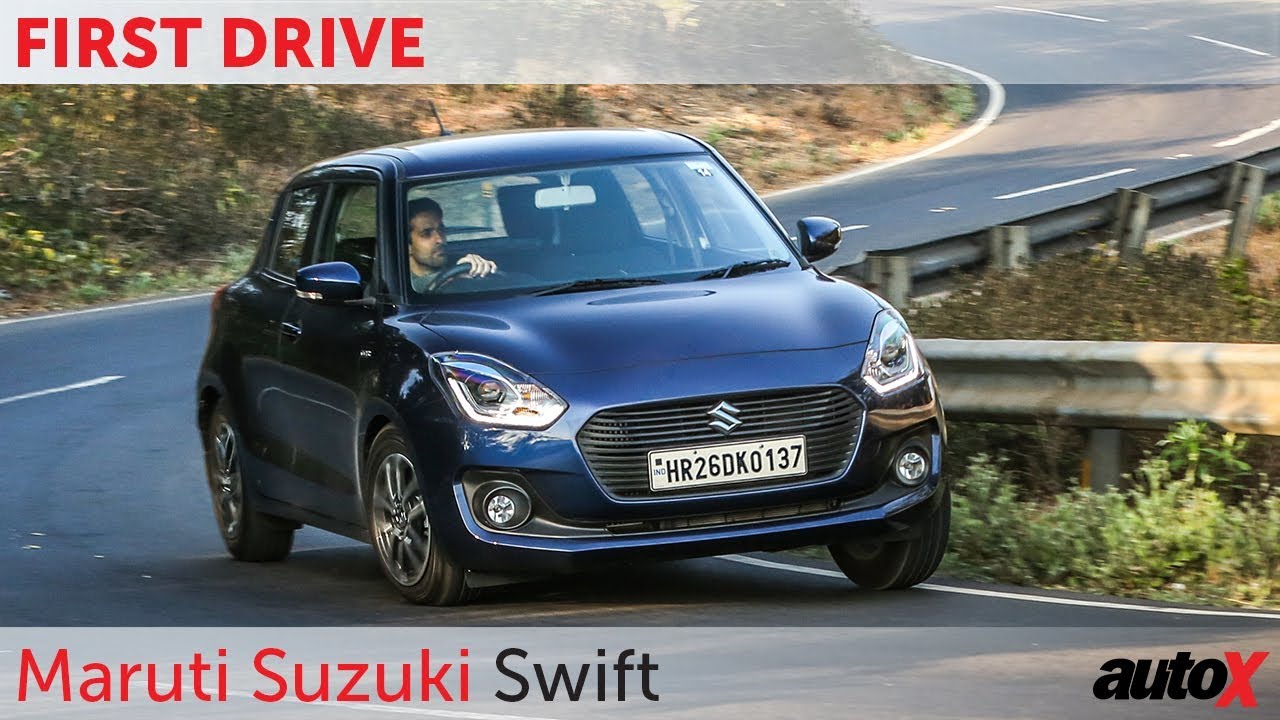