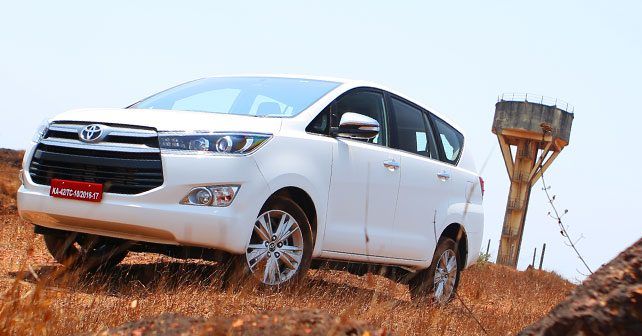 The Toyota Innova has become an irreplaceable vehicle in the Indian automobile market. It is a big deal then that a new model is finally here! We head over to Goa to drive it and find out just how much of an evolution this is for the mighty Innova name.

When we think of multi-purpose vehicles (MPV),the first thing that comes to our mind is practicality, spacious and the Toyota Innova. Well if one was completely honest, the MPV segment has been a man show for a very long time, dominated by Toyota with the introduction of Qualis. It was the lifeline of feet operators and was the segment leader by a comfortable margin, but Toyota decided to do the unthinkable by replacing it with a more contemporary and aesthetically pleasing to the eye, for an MPV, the Innova and since then there was no turning back

After ruling the roost for over a decade, the Japanese automobile giant has finally decided to let the first generation Innova retire gracefully as they get ready to launch the all new Innova Crysta on May 3rd. Before the launch we got to drive this new MPV on the winding narrow roads of Goa and find out how the Innova Crysta fairs in real world driving conditions. 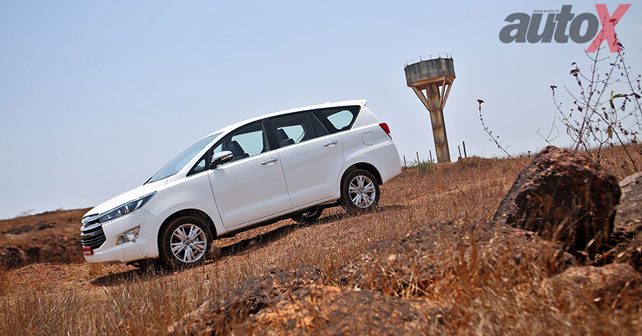 Toyota decided to go all bold, in terms of design, with the new Innova Crysta. This could also be an attempt to camouflage the boxy MPV shape, but one cannot confuse it with any other vehicle due to its typical van like design. But credit should be given where it’s due, the Innova Crysta doesn’t look anything like a people’s mover from any angle rather the big imposing hexagonal grille and Katana blade like shaped headlamps make the Innova a premium vehicle. This new obtrusive front grille is quite similar to the Corolla Altis and the Camry, though the Innova’s grille is a lot bigger and wider in size. Also the twin pod projector lamps with LED daytime running lights add a touch of class. Toyota has tried to buff up the Innova with a pronounced V crease on the bonnet while the prominent shoulder lines running across the doors all the way to the tail lamps and are complemented by 17-inch alloy wheels. The C-pillar gets a freshly new designed window, which seems to be inspired from Lexus LX. Coming to the rear, the all new boomerang rear lamps, or as we would like to call them Tomahawk shaped, really stand out while the top of the line variant comes with a roof spoiler 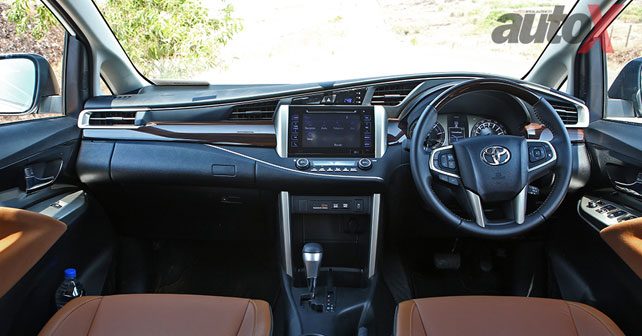 Step inside and you’re welcomed with an air of opulence, which no other MPV can boast about. The cabin gives a lounge like feel with ambience light and rich materials fitted inside at top notch. The Innova Crysta’s dashboard is like a work of art as it is sculpted with wooden panels and aluminum touches. Toyota has actually managed to make it look chic with a 1.5 metre silver trim running across the dash. Like most contemporary vehicles, the 7-inch infotainment touch screen hogs the Innova’s dashboard, but it offers more panache as it comes in aluminum brushed finish.

The Innova is available in Piano black interiors or in a combination of black and tanned leather upholstery. Personally, we preferred the latter option as it has more panache. The Innova just keeps on impressing us as the passenger door comes with wooden panels. 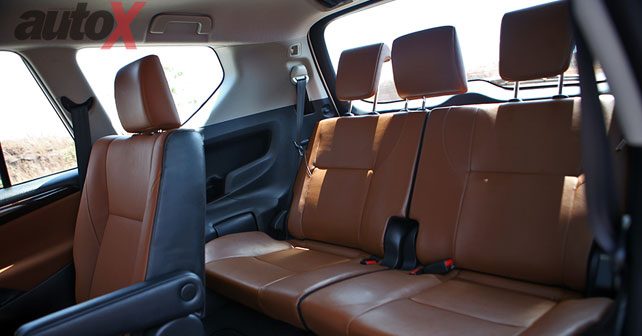 When it comes to practicality, the Innova leads from the front, but now the Crysta takes it a couple of notches above as it has storage space for 20 plastic bottles. That’s right 20. Smart thinking by Toyota as the front bottle holders are placed in front of the air conditioner vents, ensuring that they remain cool. It also comes with a glove box with a cooling system.

As it is an MPV, cabin space and passenger comfort are two important criteria, which the new Innova storms ahead. There is plenty of legroom and shoulder room as the Crysta is longer, wider and taller than the outgoing model. Toyota has improved the seats as well as they are not only more comfortable, but now provide much better side support. The seat squab has been redesigned and thus thigh is much better, especially the Captain Seats in the second row. Coming to the third row, getting in and out of the MPV is a bid of challenge, but the space it provides could very well be class leading as there is plenty of breathing space for the knees and the legs. Keeping convenience in mind, the second row seats come with one touch tumble operation that easily folds the seats, allowing passenger to climb into the last row. It’s amazing Toyota’s attention to detail surpasses even what many may expect. 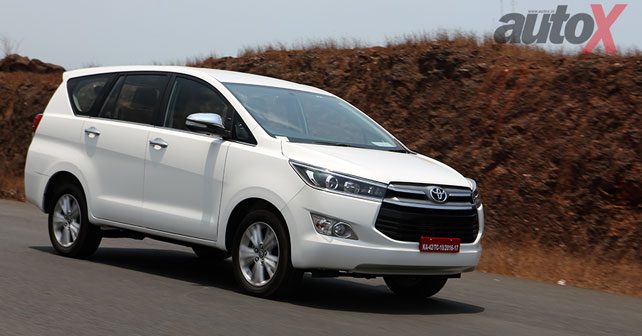 For the first time, the Innova will be available in two diesel engine options. The automatic variant is powered by 2.8-litre powerplant mated with 6-speed torque convertor transmission. Step on the gas, and due to tall gearing ratio, the 172bhp doesn’t kick in as quickly as we would have liked. But keeping in mind that this model is focused on driving in traffic effortlessly, it manages to achieve this without any issue. The Innova’s pace increases once the rev metre passes the 2,000rpm, that’s when it finds its mojo and eagerly gallops ahead.

The manual version, on the other hands, doesn’t get stage fright when it comes to performance. The 2.4-litre packs a punch when you put the pedal to the metal. Our sincere advice is to brace yourself as it throws you back into the seat. This was a pleasant surprise to us as we never thought a MPV would be capable of adding some zing into its DNA. What’s impressive is that the 148 ponies are always ready to burst into a sprint without any cajoling, thanks to shorter gear ratio. The manual version is an absolute peach to drive.

Now both the Innova Crysta versions come in two driving modes – Eco and Power. The former, as expected, is all about being fuel efficient, but what's worth noting is that the MPV never felt power deprived. It still has more than enough juice to negotiate traffic. On the other hand in power mode, the Innova Crysta becomes quite a free revving machine always wanting to go that extra mile effortlessly. 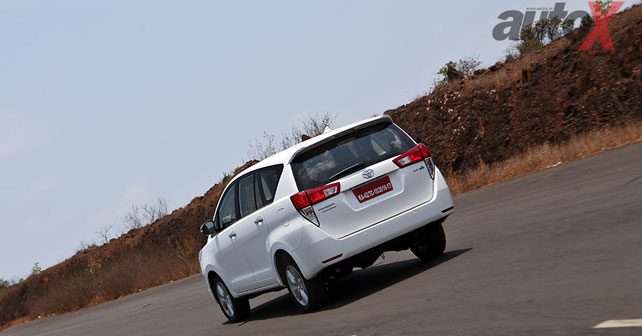 Toyota insists that the Innova Crysta is not a multi-purpose vehicle, rather a multi performance vehicle and we totally agree with them. Both the 2.4 and 2.8-litre diesel engines provide quite grunt that will keep you smiling, though the manual version is a lot more fun to drive. The NVH level in the cabin is far superior than the first generation Innova due to additional sound proof materials. Therefore, the engine noise is barely audible. Innova always provided a comfortable ride quality, but the Crysta is in a different league all together as it simple sails over ditches. It cushions undulations and potholes easily. Innova Crysta offers very decent driving experience, sublime ride quality, luxurious cabin and safety features like top of the line version is equipped with 7 airbags. It is no more an MPV leader, the Innova Crysta now has its eyes set on the D-segment and knowing Toyota, it might vanquish this struggling class. 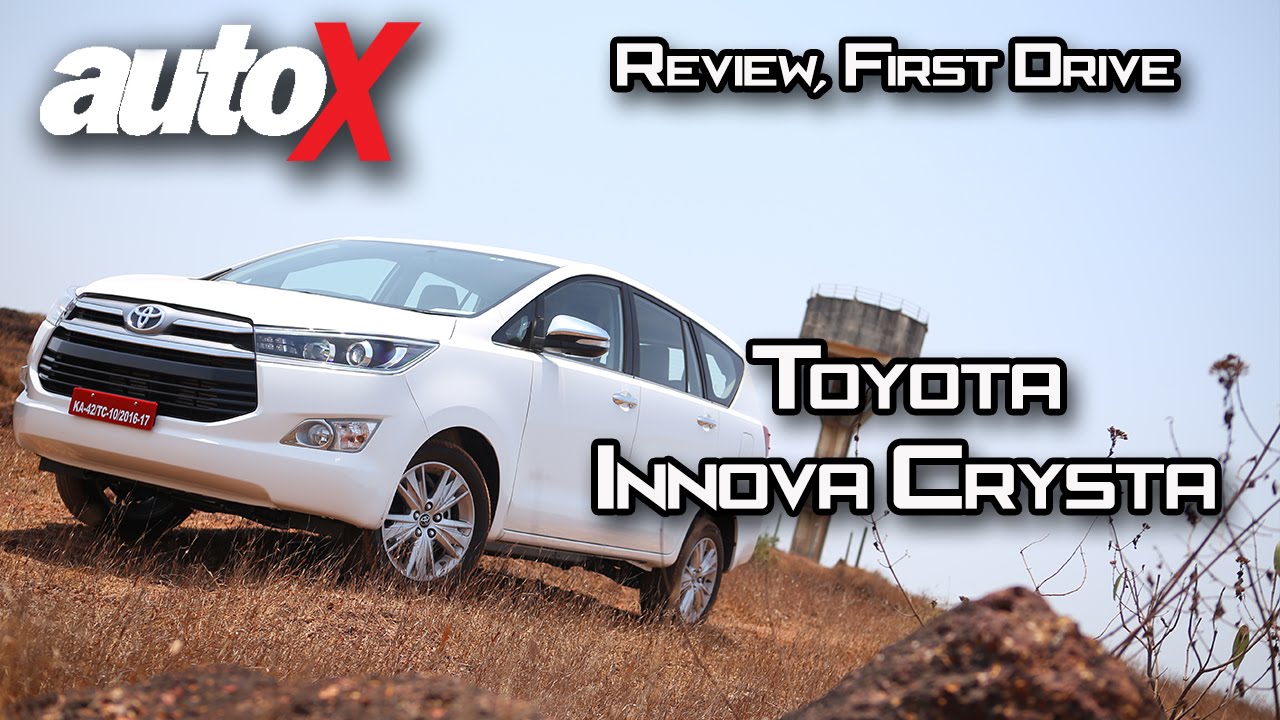 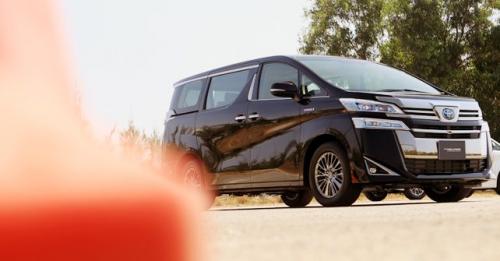