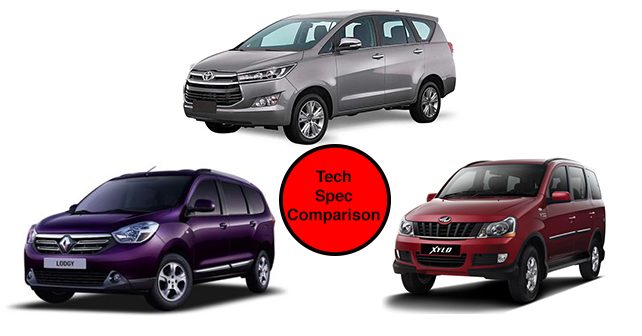 In India, the king of the MPV segment has always been the Toyota Innova. After 10 years, Toyota has finally given us the Innova Crysta, the second generation of the massively popular people carrier.

We take a look at how the new Toyota Innova Crysta fares against the Mahindra Xylo and the Renault Lodgy on paper. For this comparison, we are looking at the top of the line, most powerful variants with manual gear boxes to have an even playing field.

While the Innova Crysta is the longest car among the three, however the Xylo is wider and taller. The Innova also has the shortest wheelbase while the Lodgy having the longest with 2810mm. The Crysta and the Xylo both have 55 litre fuel tanks, while the Lodgy only has a 50 litre capacity.

The Renault Lodgy with the smallest size also has the smallest engine. The Lodgy comes with a 1461cc engine that is offered with two power outputs to chose from. The most powerful one generates 108hp and 245Nm of torque. The Xylo gets the 2179cc, 4-cylinder engine and produces 118hp and 280Nm of torque.

The Innova however gets a brand new 2.4 litre 4-cylinder turbo diesel engine that chips out 148hp and 343Nm of torque, making it the most powerful car in the segment. The Crysta and the Xylo both come with 5-speed manual gearboxes, however the Lodgy comes with a 6-Speed manual. The Lodgy is also the only car thats front wheel driven, while the Toyota and the Mahindra are both Rear wheel drive.

Naturally, the Lodgy will have the more fuel efficient engine because of its smaller size. The Lodgy gives a claimed, 19.98km/l, while ehe Innova with its 15.10km/l mileage is better than the Xylo's 14.02km/l.

The Xylo and the Innova both get Double Wishbone suspension at the front while the Lodgy has a McPerson Strut set up - because its Front Wheel Drive. At the rear, the Xylo has a Multi Link set up and the Lodgy gets a torsion Beam with Anti Roll Bars. The Crysta has a 4-Link set up at the rear and overall it also comes with what Toyota are calling 'Pitch and Bounce Control' which basically stabilises the car even of rough road surfaces.

Both the Lodgy and the Crysta get ventilated front disc brakes, while the Xylo has to make-do with a solid disc. The Innova however has discs which measure at 16 inches, which is why the Innova has 17 inch wheels as standard and the Xylo and the Lodgy get 15 inch rims.

In terms of safety, all of the cars get ABS and EBD, but the Innova comes with it as standard. When it comes to airbags, the Innova not just comes with two, but three airbags at the front as standard fitment (Driver, Driver Knee & Passenger). The top trim Crysta gets 7 airbags as opposed to the Xylo and the Lodgy's only dual front set up. All three cars get rear parking sensors but the Crysta and the Lodgy get reversing cameras as well.

The Toyota and the Renault are both evenly matched in terms of features. However the Xylo might be able to seat up to 9 people (compared to maximum capacity of 8 people in the Innova and the Lodgy), the Mahinrda does lose out on some aspects like climate control and keyless entry.

Despite the fact that the Crysta does not get DRLs, it still does one above the others with tilt and reach adjustable steering and power windows with Jam protection.

The Xylo has a decent powertrain, but does lose out in smaller details from the two, and the Lodgy loses out mostly due to its size being smaller than the competition.

The second generation Toyota Innova Crysta being being new, is more up-to-date with the market and with its offerings. The Toyota has been the segment leader but the question remains how will Toyota price the car in India. The premium features and touches is likely to drive the prices up from the older generation, but by how much remains to be seen.