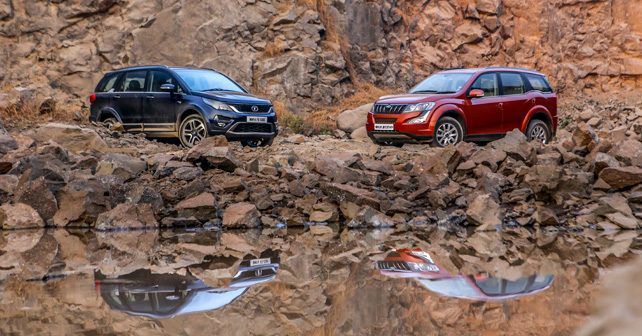 The Indian automobile industry has come a long way. And there are no more excuses for anything less than world-class. So what happens then when we pit the flagships from Tata Motors and M&M against one another?

I still remember when I first saw the new Tata Safari in 1998. We didn’t have too many options back then, and the Safari just looked so cool. It was one of the first large SUVs to be sold in the country, and a lot of people wanted one. It was huge and unlike any other car on the market. The chunky body cladding, subtle graphics and 4WD Turbo Intercooler stickered across its side made it all the more exciting. The interiors looked relatively modern too, with no exposed metal panels and a decent equipment list. It was the most desirable Indian car of the time.

It’s been nearly two decades since then, and what we have here are the current crop of flagship Indian cars – the best from the powerhouses of Tata Motors and Mahindra & Mahindra. While Mahindra’s XUV500, which was launched in 2011, was met with instant success, the Tata Motors Aria, introduced in 2010, bombed on the sales front. Tata has now come up with its all-new offering – the Hexa. So, here they are pitted against each other – the brand new Hexa, up against the best from M&M’s stable, the updated Mahindra XUV500. 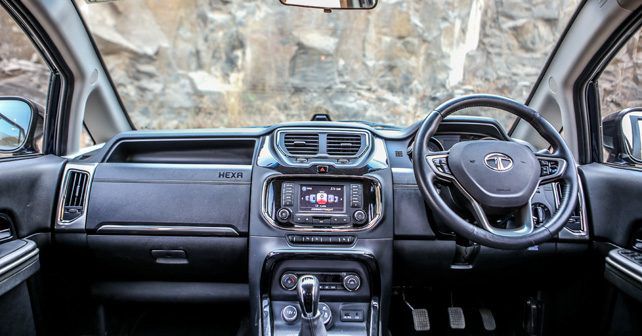 The cars we have here are the top-spec variants of the respective models. We know, from the past, that both carmakers love loading their cars with as much equipment as possible. Apart from features such as projector headlamps, puddle lamps, electrically adjustable driver’s seat, leather seats, touch-screen infotainment systems, etc. the XUV in this W10 variant gets a sunroof and a grand total of 31 buttons – excluding knobs! While the Hexa comes with different driving modes, retractable sun blinds for the second row, a 10-speaker JBL sound system, eight ambient colour choices and the option of captain seats for the second row. Both these cars are the seven-seater models, but the Hexa feels more spacious – as the car is longer, wider and taller than the XUV. The second row, especially, feels a lot more spacious – excluding the middle seat, as the centre console eats into the legroom. And since the second row can also slide fore and aft, you can make more room for the third row occupants. The Hexa also has more comfortable and supportive seats. The Tata wins again on the space front with all three rows up. It has a decent amount of boot space, whereas the XUV barely has any left with the third row of seats in place.

The quality of plastics and the switchgear is better in the cabin of the Hexa. And when it comes to the dashboard, the numerous grooves along with silver plastic and chrome inserts give the Hexa a more stylish look compared to the rather plain Jane layout of the XUV. Despite the smaller touchscreen interface in the Hexa, the system is better to operate during the day – as the unit in the XUV is barely visible when it’s bright outside. Both systems, however, need better touch sensitivity. 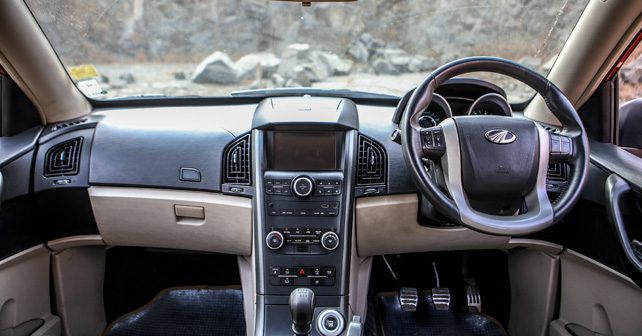 It is, however, not all doom and gloom for the XUV, as its instrument cluster looks fairly upmarket thanks to a nice layout. And the blue ambient lighting is soothing. Plus, it’s a comfortable car and quite nice to drive in the city. The moment you crank the mHawk engine, it’s clear that this is a very refined motor. The clutch pedal is light and effortless for a large diesel SUV and the gearbox enables smooth and precise gearshifts. Plus, the XUV is very easy to manoeuvre.

However, while heading towards Navi Mumbai, the weak link in the XUV’s drive dynamics became evident. At 100km/h, the car feels jittery on the road – especially on broken or uneven tarmac. In fact, the car felt so skittish that any faster and it would have been unnerving.

The Tata Hexa, on the other hand, doesn’t feel as agile as the XUV – because it weighs a mammoth 2.28 tonnes. And so it’s not as lively either, despite its 16 horsepower and 70Nm power advantage. So right from the get go, the Hexa feels slower than the XUV. Acceleration in the Hexa is further hampered by a rubbery and vague manual gearbox, which takes some getting used to – but, even then, you’re constantly wondering whether you’ve got the right gear. At higher speeds though the Hexa is far more confidence-inspiring, as it feels a lot more planted on the road – despite the fact that the light steering requires constant adjustment. 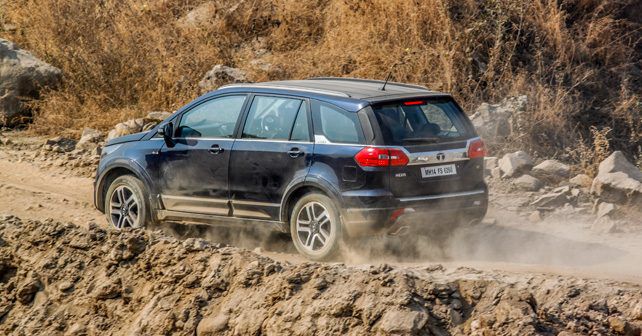 Go off the beaten path, and you’ll find that the Hexa’s ride comfort is impressive. Both these cars come with on-demand all-wheel drive systems that power the driven wheels normally, and only send power to the other two-wheels only when there’s a loss of traction. That being said, the option of all-wheel drive is something that certainly comes in handy while on soft sand, such as at the surface we found ourselves on in the stone quarry that was our shoot location. That said, neither of these vehicles are meant for serious off-roading with their relatively low ground clearance and long overhangs. Still AWD means you can at least venture out to those snow-clad hill stations during the winter months.

And with that we arrive at the question of which is a better buy today? Well, the Mahindra is now a proven product, as niggling issues have been ironed out over time. The XUV is also a little better equipped in the lesser variants. But, purely from a product perspective, the Hexa is the better automobile. It’s more comfortable, spacious, better equipped and has more road presence. However, long-term dependability is something that only time will tell.

But, for now, the Hexa is our choice.

X-Factor: Still has road presence, and it remains good value. Rough around the edges though.