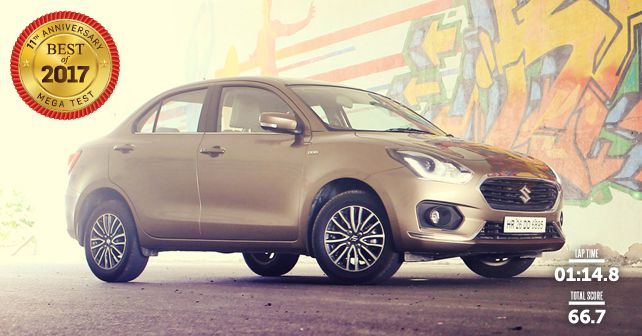 The Maruti Suzuki DZire has ruled the sub-four-metre sedan segment ever since its inception. Now, the latest generation DZire has done one better. Within three months of its launch in May 2017, the DZire overthrew the long-established top-selling car in the country – the Alto. The new DZire clocked sales of 26,140 units in August, which was well ahead of the 21,521 units sold for the Alto in the same month. What’s even more interesting to note is that in August last year, the older DZire sold 15,766 units – while the Alto clocked 20,919 units. These numbers not only demonstrate just how important the DZire is for Maruti Suzuki but also how desirable the new DZire really is.

The 2017 car is a vast improvement over the older model in all respects. We never thought we would say this, but the DZire actually looks quite classy in its latest avatar. It doesn’t come across as a workhorse sedan anymore. The eye-catching LED daytime running lamps, along with projector headlights, add a sheen to this sedan and give it road presence like no other vehicle in its segment. Due to its newfound premium looks, the DZire manages to score an impressive 3.5 out of 5 points in the terms of design. Maruti has also spruced up the cabin with a smart touchscreen infotainment system, which has navigation inbuilt, and is equipped with both Apple CarPlay and Android Auto – as well as Bluetooth, of course. The dual-tone black and beige cabin feels airy, and even the faux wood inserts look well integrated. The flat-bottom steering wheel is fantastic, and Maruti has even put in rear AC vents. 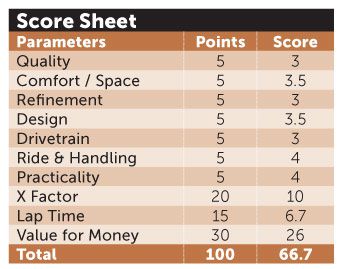 Apart from it being a better-looking sedan, based on the Baleno’s Heartect platform, the DZire is now also longer and wider – so it’s far more spacious on the inside. Another good thing about the new DZire is that it’s shed some weight in its latest avatar. This means that, along with the new chassis, the DZire’s handling traits have greatly improved. It doesn’t wallow and roll anymore. In fact, it’s very sharp and flat through the corners. It not only feels very good during the daily commute, but it actually feels quite suited to be thrown around a racetrack as well.

The DZire continues to be powered by the ever-reliable 74bhp 1.3-litre Multijet Fiat diesel engine. If we had to knit-pick, the initial turbo lag still persists, but once it overcomes that the mid-range is stronger than ever. And, of course, the 1.3-litre diesel motor still continues to be one of the most fuel-efficient engines around.

So, the DZire looks posh, with a cabin that’s spacious and well equipped – even when it comes to safety features. The DZire comes with ABS, dual airbags and ISOFIX seats as standard. And the ride quality is ideal for Indian roads, as it easily cushions potholes.

All said and done, Maruti appear to have taken a long hard look at the DZire and have managed to vastly improve it in every department. In addition to this, it still offers reliability and value-for-money in spades. So it’s only natural that the new DZire should be one of our ‘Best of 2017’ picks.