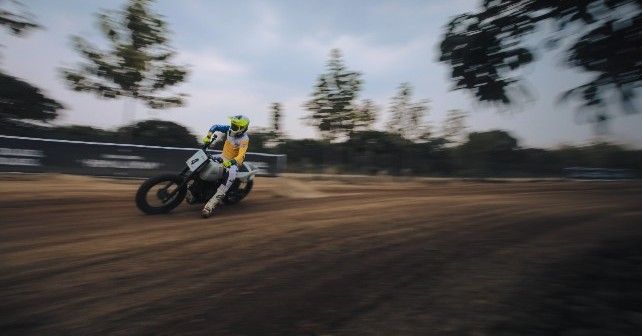 Royal Enfield has started a special Flat Track experience course at the Big Rock Dirt Park in Bangalore – giving Jared the experience of a lifetime!

At Rider Mania last year, Royal Enfield unveiled a very special looking custom version of the Himalayan. The bike was called the FT 411, and it was hailed as a Flat Track racing machine. To my surprise, RE then brought in some professional flat track racers to demonstrate the capability of this machine. I was impressed not just by the Himalayan’s awesome look as a flat track racer but also by its ability to slid sideways across an oval dirt track.

After the FT 411, RE gave us another surprise when they announced that it was opening up a Flat Track at Big Rock Dirt Park and would be offering a special training course in flat-track racing. This special course is called Royal Enfield Slide School, because that is essentially what you do on a flat track – slide!

Big Rock Dirt Park was started by India’s leading motocross athlete, and Dakar racer, CS Santosh. In the pre-lockdown era, RE invited me to visit the park for a day and check out the new Slide School. I obviously couldn’t say no, especially because I had so much fun at my last Flat Track experience with Harley-Davidson in Jaipur – I was hooked to sliding around a dirt track.

When I arrived at the Big Rock Dirt Park, I was instantly impressed by the facility. It’s definitely one of the best motorcycle-dirt-riding places in the country. There are numerous courses and trails for you to really hone your skills and have a great time while you’re at it. The Flat Track was designed by experts hired by Royal Enfield, and although it’s not a very big oval track like the ones you find in the US, it still is decently sized for beginners and amateurs to have some fun. 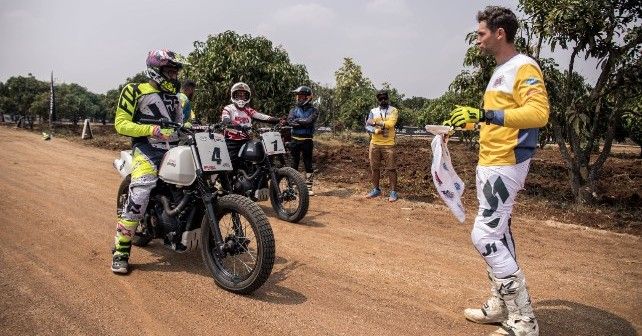 As I suited up and got ready to start riding and sliding, we, a batch of riders, were introduced to the instructors – Johnny Lewis, an American pro racer, Nilesh Dhumal, and Vijendra Nilagiri, a.k.a. Nelly and Bheema. After a quick briefing session about the track and the FT 411 bike, we moved to the track where we were shown the correct seating and body positions when riding on a flat track.

As I’d learnt before, the conventional basics of motorcycling are thrown out the window when it comes to flat-track riding. Normally, you don’t want to slide the rear tyre when you’re racing, but in a flat-track race, the most effective way to clock faster times is to slide the motorcycle around turns. In a nutshell, your feet, knees, buttocks, hands, and elbows stay in very awkward positions, and you end up using muscles that you don’t otherwise use. Johnny showed us as much as he could, and then allowed us to have a go for ourselves. 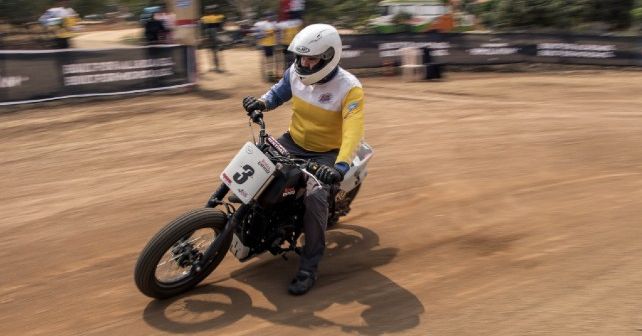 It took me a bit of time to get used to the fact that there was no front brake. On a couple of occasions, when I lost control or was going too fast into a corner, I would instinctively reach for the front brake lever only to realise that it’s not there. What then? Slam on the rear brake, and go spinning out of control and flying off the motorcycle!

But, frankly, it’s just a matter of time before you get used to it. And once you learn to rely on the rear brake while accelerating and using it at right braking points, you can start worrying about your body position and leaning the bike and making the rear wheel spin, all the while maintaining total control. Once I started to do that, I became addicted to it. The thrill of sliding around a sharp corner is a rush unlike any other. 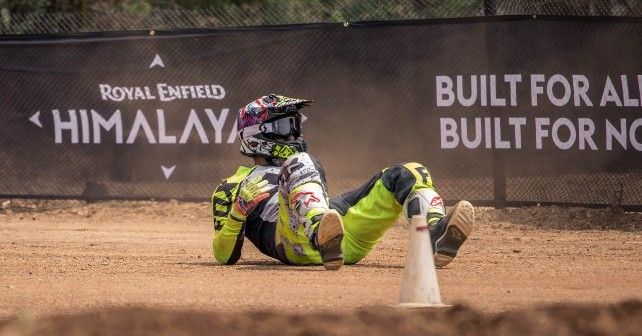 Mind you, you can’t expect to just head down to the Slide School and start sliding right away. It took me a couple of hours to finally understand the machine, track conditions, learn the right body positioning, and when to brake and when not to. It’s a beautiful feeling and, at the same time, it’s exhausting. You need to be in good physical condition for sure. After half a day of riding, I felt as if I had been through one of the most exhausting workouts of my life. 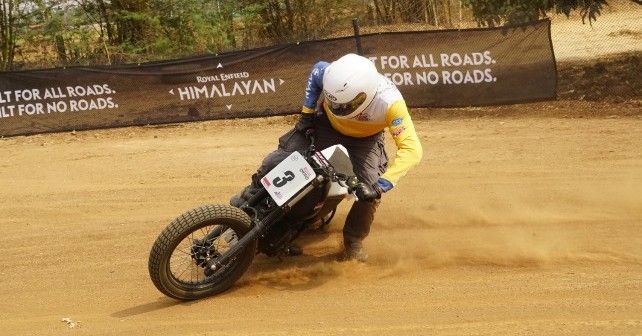 Who is the Slide School for?

I am not a flat-track racer by any means, and neither am I a racer of any sort, and I still enjoyed every bit of my time in the Slide School – it was really a wonderful experience. RE told us that the Slide School is for any biking enthusiast who would like to experience flat track motorcycling. RE wants to build the flat track scene from the grassroots level and train riders from all levels in a safe and controlled environment.

You can even go there on your own motorcycle and do the flat track course on your own machine – it doesn’t necessarily have to be the FT 411. Although I would suggest that you participate in the course with the FT 411 because it is specially designed to be a flat-track racer, and you will have more fun with it. You can get all the details about the school from RE’s website. All I can tell you is that if you do decide to go, then go with a group of friends and you’ll have the time of your life.