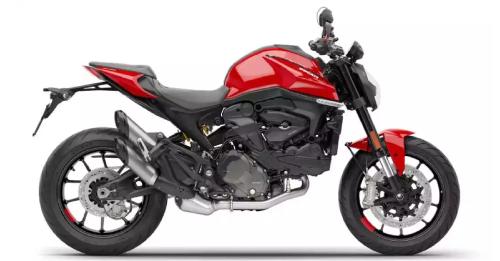 The Ducati Monster BS6 Mileage is 32 kilometers per litre.

The latest Ducati Monster doesn't only lose its number suffix but loses a lot more than that to gain an entirely new image in its place. Purists and long-time fans may complain, but it's undeniable that the new Ducati Monster is more of a monster than its previous editions. The Italian automaker, keeping up with the Monster's tradition, has modelled the latest iteration in line with its current Panigale. In doing so, the bike loses out on traditional looks for something much more modern. So, what makes the latest Ducati Monster BS6 entitled to the legendary name that it holds? Read on for more information.

In the face of modern competition, Ducati has made significant changes to the Ducati Monster platform. An all-new frame replacing the traditional Trellis frame means that the new Monster is quite different to the outgoing Ducati Monster 821. The latest offering by Ducati now comes with an aluminium frame quite similar to the Panigale V4 and V2. It gets clean, aggressive lines and a chiselled tank. The bike retains the round headlight set-up, albeit in a completely new design. The new headlight is more oval and integrates a bright round DRL. The new Ducati Monster's new frame means it's much lighter than its predecessor, with a kerb weight of 188kgs wet.

The new Ducati Monster gets an all-new engine with its new platform. The bike gets the same 937cc Testastretta 11° L-twin engine that also powers the Ducati Supersport 950. The powerhouse engine puts out 109.4bhp at 9,250rpm and a peak torque of 93Nm at 6,500rpm. Transmission duties are given to a manual six-speed gearbox that gets a hydraulic clutch and a quick-shifter as standard.

Thanks to its new frame and design, the latest Ducati Monster is nimbler compared to the outgoing version. The bike also gets updated suspension components, meaning it no longer feels cumbersome like older variants of the Monster. The bike gets a non-adjustable 43mm upside-down front forks and a pre-load adjustable rear mono-shock for suspension duties. For braking power, dual 320mm front discs, coupled with radially mounted Brembo M4.32 4-piston callipers. These are mated to grippy Pirelli Diablo Rosso III tyres.

The new Ducati Monster gets a fair number of features and rider aids. The list includes two power levels and three completely customisable riding modes. Safety features in the bike include eight levels of traction control, three levels of cornering ABS, wheelie control, launch control and a bi-directional quick shifter as standard, shown to the rider through a 4.3 inch, full-colour TFT display. A second variant of the bike known as the Monster Plus gets a rear seat cowl and a fly screen among other accessories.

The 2021 Ducati Monster gets two variants, a standard variant priced at ₹10.99 lakhs (Ex-Showroom) and a Monster Plus variant priced at ₹11.24 lakhs (Ex-Showroom). The bike gets six colour schemes between the two variants, Ducati Red, Aviator Grey, Dark Stealth and Monster Plus editions of the same schemes - Plus - Ducati Red, Plus - Aviator Grey and Plus - Dark Stealth. For the 2021 Ducati Monster's on-road price and other details, be sure to check out autoX's price section.

What is the price of Ducati Monster BS6 ?

The ex-showroom price of Ducati Monster BS6 is 11.92 Lakh. Check On Road Price of Monster BS6 .

When did Ducati introduce the Monster BS6 in India?

In its current form, the Ducati Monster BS6 was introduced in 2021.

How many variants of the Ducati Monster BS6 are currently on sale?

The Ducati Monster BS6 is currently available in 2 variants.