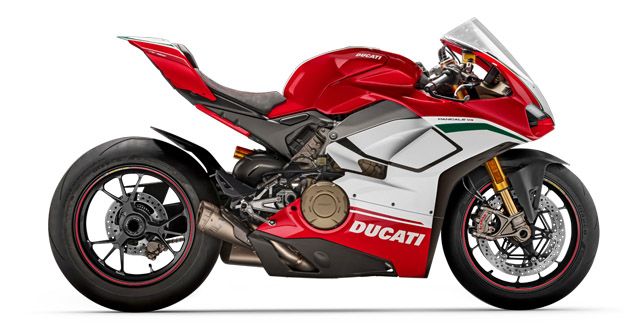 Headlined by a unique livery, more firepower and lightweight components, the Ducati Panigale V4 Speciale arrives on Indian shores with an eye-watering price-tag of over half a crore!

There’s no denying that the Ducati Panigale V4 is a pretty special motorcycle in the standard guise. However, if you don’t already know, Ducati has an even more special version of its litre-class superbike and it’s, unsurprisingly, called the V4 Speciale. Thus far, we in India only had the V4 and V4 S, but Ducati has now also brought the Speciale variant to our shores as well. The company has just delivered the first unit of the V4 Speciale at a whopping price of Rs 51.81 lakh (ex-showroom)!

Obviously, you want to know what special bits does the Speciale have as compared to its lesser versions. To begin with, the V4 Speciale gets a special racing livery so that it stands from the regular V4 and V4 S variants. In addition to his, it gets carbon fibre front and rear mudguards, a full racing Akrapovic titanium exhaust, adjustable foot pegs, carbon fibre heel guard, carbon fibre swingarm cover, a racing screen, Ducati data analyser, billet steering plate and much more.

The standard kit is identical to the V4 S, meaning it gets fully adjustable Ohlins electronic suspension - NIX-30 USD fork up front and TTX36 unit at the rear. There’s Ohlins steering damper as well. That said, unlike the V4 S, the Speciale strangely doesn’t get Marchesini forged aluminium alloy wheels as standard. They are available as optional extra though. Both the V4 S and V4 Speciale also weigh the same at 194kg (kerb weight). Mechanically, the V4 Speciale is identical to the V4 S as well, as it’s propelled by the same 1,103cc V4 motor. However, the engine develops 226bhp and 134Nm in here, which is 15bhp and 10Nm more than the V4 S.

Ducati India hasn’t revealed the exact number of V4 Speciale allotted to customers here, but given the fact that only 1,500 units of this motorcycle are made for the entire world, we aren’t sure if we will see more of these in India in the coming time.