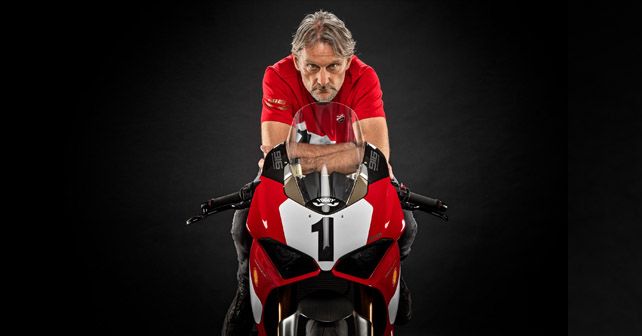 Ducati pays homage to the iconic 916 on its 25th anniversary by launching a special edition version of the V4 S. Only 500 units will be available.

1994 was the year when Ducati gave the 916 to the world. Put simply, it was a fully faired motorcycle that was a phenomenon in every aspect. Not to mention, it’s perhaps one of the most beautiful mass-produced motorcycles to date. Now, if you’re good at math, you’ll realise that this year marks the 25th anniversary of this legendary motorcycle, which obviously calls for some special celebrations. So, in order to commemorate the silver jubilee of their superbike icon from the 90s, Ducati is going to launch a very limited edition of its current superbike sensation, the V4 S.

The anniversary special version is billed as the Panigale V4 25° Anniversario 916. Only 500 units will be made, and Ducati will reveal the motorcycle at Laguna Seca on July 12, on the sidelines of the American round of this year’s World Superbike Championship. To make the ceremony more special, the Panigale V4 25° Anniversario 916 will be unveiled by Carl Fogarty, who, if you need reminding, is a four-time World Superbike Champion – three of which came on the 916 between 1994 and 1998.

The base for the Anniversario 916 is going to be the stonking V4 S, meaning the mechanicals will be unchanged from the current bike. That means it’s powered by the same 1,103cc V4 motor that churns out 211bhp of power and 124Nm of torque. But the Anniversario 916 will come with special graphics and racing decals, along with individual numbering of the model engraved in the upper triple clamp. Ducati also says that it’ll get exclusive racing components.

In addition to this, Álvaro Bautista and Chaz Davies of Aruba Racing Ducati team will pay a further tribute to the 916 as their World Superbike Racing bikes – V4 R, in this case – will flaunt a special livery inspired by the graphics of the Panigale V4 25° Anniversario 916.