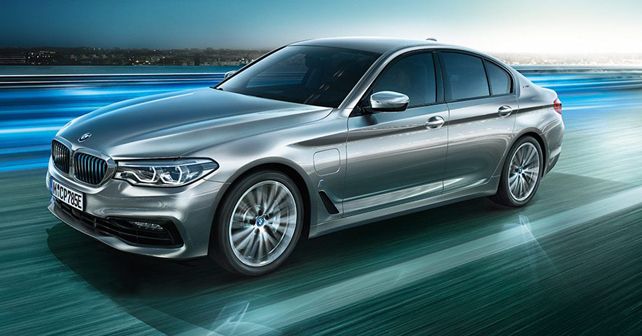 The 2019 iteration of the BMW 530e benefits from BMW's latest battery cell technology – it gets a more powerful battery pack & a longer electric driving range.

BMW claims it has made the 2019 530e even more efficient than before, thanks to its reduced fuel consumption (1.6 litres/100km) and lesser CO2 emissions by up to 20 per cent (36gm/km). If this wasn't enough, the new 530e also gets a more powerful Li-ion battery pack (12.0kWh instead of the earlier 9.2kWh), without any increase in size. The result? A longer electric-only driving range. While the preceding model had a maximum electric-only range of 50km, the 2019 version can travel from 61to 66km on pure battery power. The AWD xDrive derivative, however, has a slightly lower electric range of 55 – 58km.

The plug-in hybrid powertrain of the 2019 BMW 530e includes a 2.0-litre four-cylinder TwinPower Turbo petrol motor, which has a rated power output of 181bhp. The electric motor, a 111bhp unit, remains the same as before. Together, the hybrid powertrain generates a power output of 248bhp & 420Nm of torque. The 2019 530e is 0.1 of a second quicker in doing the 100km/h sprint (6.1 seconds) than its predecessor, but both iterations have the same top speed, which is limited to 235km/h.

To further improve efficiency, the driver can influence a standard driving mode with the 'eDrive' button. In AUTO eDRIVE setting, the top-speed in electric-only drive mode is restricted to 110km/h. To enjoy speeds of up to 140km/h, the setting can be changed to MAX eDRIVE. The 530e and 530e xDrive also come with a safety feature called 'Acoustic Pedestrian Protection', which generates an external sound (when the car is driven in electric mode over 30km/h) to alert other road users & pedestrians of the approaching vehicle.

While there is no confirmation of BMW bringing the 530e to India any time soon, the possibility of it does exist. That's because BMW India recently launched the all-new 7-Series here, and with a hybrid variant (745Le xDrive).

12.0kWh is a mini battery, just to say it's electric. But the huge invested technology to build that internal combustion engine stuff is so immense, that that small battery and "fake" electric vehicular is like nothing.

In the case of hybrid powertrains, modern carmakers focus on electric power as a supplement to the internal combustion engine. Therefore, contrary to purely electric vehicles, hybrid cars get a relatively smaller battery pack.

Well, what is the use of an hybrid car? I know personally, hybrid car owners, where the charging cable is still originally wrapped. For most of the is the main focus, to buy a hybrid car, that they can drive in environment protected areas in big cities. Never min, if you driving electric or with fuel. Another main reason is, that they can save a lot of taxes, because it's much better than any internal combustion engine car. If it comes to environment protection, the impact of building an electric car, plus fully equipped internal combustion engine car is that huge, that it can never save the environment. Actually it harms more than a regular car gasoline/diesel car.