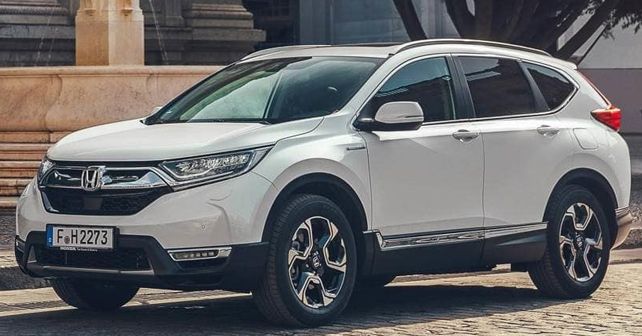 The Honda CR-V Hybrid has made its debut at the 2018 Paris Motor Show. Based upon the fifth generation CR-V, the production-ready hybrid model will have a claimed fuel economy figure of 18.8km/l and CO2 emission rating of 120/km for the European markets where it is expected to go on sale later this year.

The CR-V Hybrid will be available with either two-wheel-drive or all-wheel-drive. The main propelling motor will be a 2.0-litre i-VTEC petrol engine from the standard car and will be paired with an electric motor, which has a combined power output of 181bhp and 315Nm of torque.

The CR-V Hybrid comes equipped with Honda’s i-MMD technology that automatically switches between EV, hybrid and full engine drive modes, depending on driving inputs to deliver the best balance of performance and efficiency. The latest generation CR-V will be launched in India in only petrol and diesel forms later this month. Honda will offer the CRV with five or seven-seat configurations, however, the manufacturer has not revealed any plans to launch the new hybrid version on the Indian market as of now. Honda, however, does sell the Accord Hybrid sedan in India.