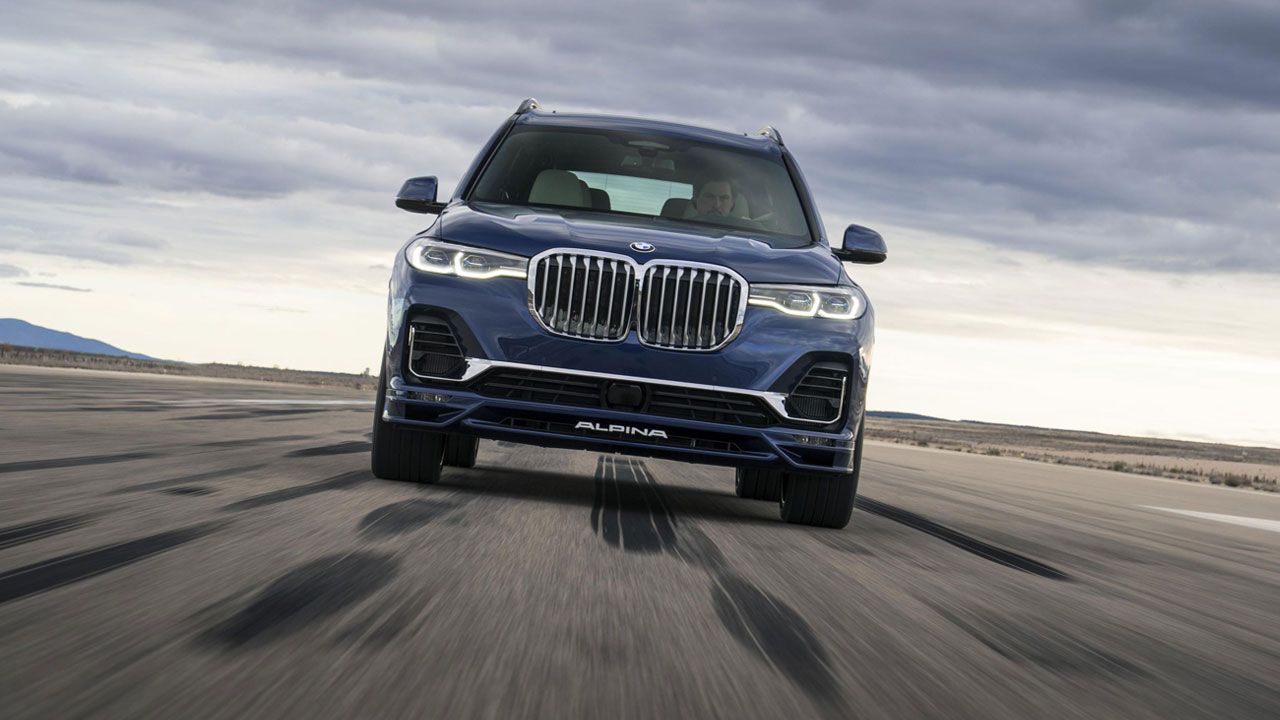 As you hit 250km/h, the XB7 drops down 0.8 inches and the V8 engine powers you onto 288km/h! The Alpina XB7 is a high-tech all-wheel drive SUV that can alter its ride height and suspension geometry dramatically to give this tall and large SUV newfound high-speed confidence.

The BMW X7 was designed to be a luxurious, plus sized SUV that expands the horizons for BMW’s SAV range. And now Alpina - BMW’s tuning arm - has done its bit to push the boundaries on the performance front for BMW’s flagship SUV. As is the norm, Alpina has taken a stock powertrain version of the X7 (in this case X7 xDrive 50i version), and fettled with the engine to allow it to generate 612bhp (89bhp) more than the standard BMW X7 M50i.

While 523bhp was not a bad place to start at, Alpina has re-calibrated the 4.4-litre V8 engine to offer a tyre threatening 800Nm of torque from as early as 2,000rpm to give this big and heavy SUV instant and relentless pulling power all the way up to an energetic 5,000rpm. In the mid-range of the powerband the engine’s bi-turbo trickery builds up on horsepower and as it reaches 5,500 revolutions per minute the big 612bhp headline power figure comes into play until 6,500rpm. Alpina’s aim was to give the XB7 a very wide powerband with extra thick layers of power and torque slapped on. While this has been achieved quite evidently, the side effect is that this massive 2,665kg can now breach the 100km/h barrier from standstill in 4.2 seconds (as compared to 5.4 seconds for the X7 xDrive 50i).

And if for some reason you aren’t impressed with the 1.2-second drop in the 0 - 100km/h timing, here’s something that will definitely get you - a top speed of 288km/h! Yup, it’s definitively not natural for a car of the X7’s size, weight and height to be knocking on the doors of 290km/h, and dare we say advisable. But it’s Alpina high-tech trickery at play here after all. Of course, the Bentley Bentayga and Bentayga Speed are faster, but then they also ride lower and weigh less. 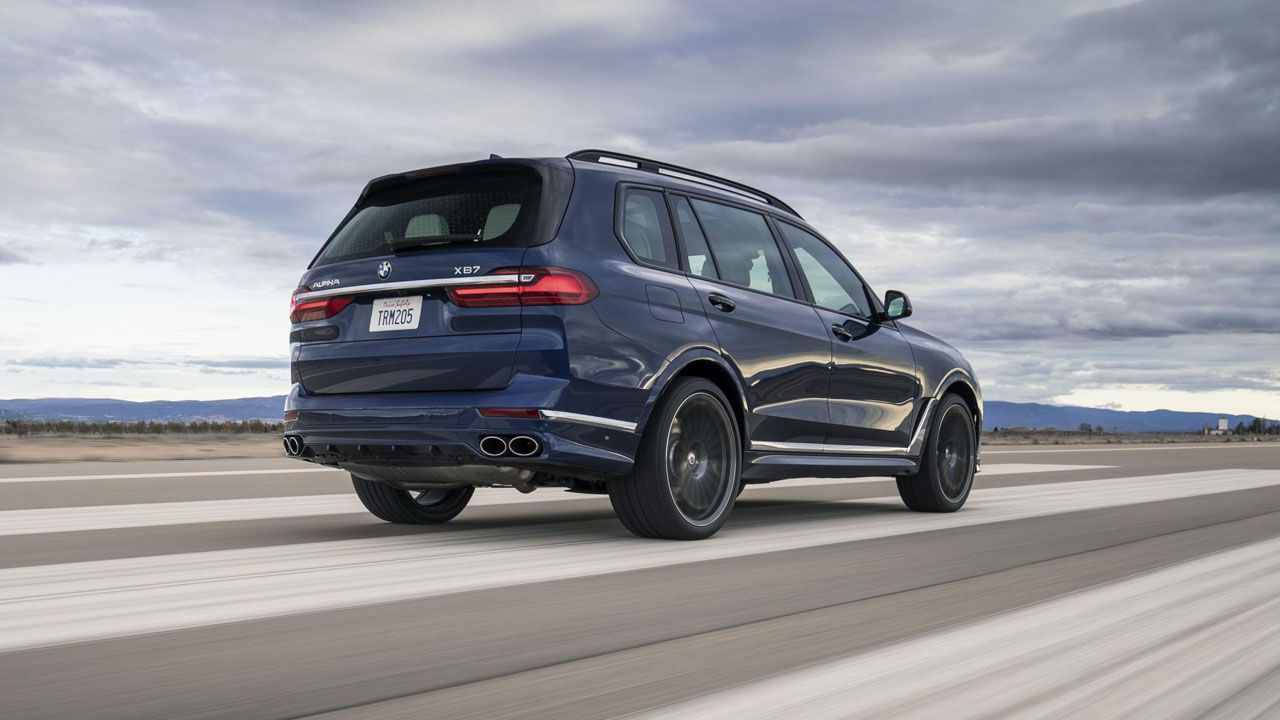 So, in order to ensure high speed stability and that Alpina smooth ride quality, the front and rear air suspension systems have been given Alpina-specific damper and kinematic set-up. This has also allowed the XB7’s ride height to be altered by as much as a whopping 1.6 inches - depending on the driving mode and speed. This is the trick to lowering the centre of gravity for the XB7 at 288km/h by dialling up the negative camber to alter the suspension geometry above 250km/h, so as to ensure a significant change in high speed stability. The Alpina specific dome-bulkhead strut and reinforced torsion struts in addition to the electromechanical anti-roll bars of the Active Roll Stabilization system and stiffer rear axle bushings reduce body roll for the SAV.

Of course, to deal with the added stress and heat generated by the more powerful engine, the turbocharging and cooling systems have been reworked. The cooling system has two additional external water coolers and a low-temperature cooling system with Alpina’s specific intercoolers, ensure thermodynamic stability even under highest loads. There is also a larger transmission oil cooler.

The X7’s 8HP76 transmission from ZF meanwhile has been fitted with the Alpina switch-tronic wheel-mounted shift buttons in cooperation with ZF experts to cope with the engine’s high torque and offer seamless gear shifts that are also said to be considerably more dynamic in Sport and Sport+ driving modes. 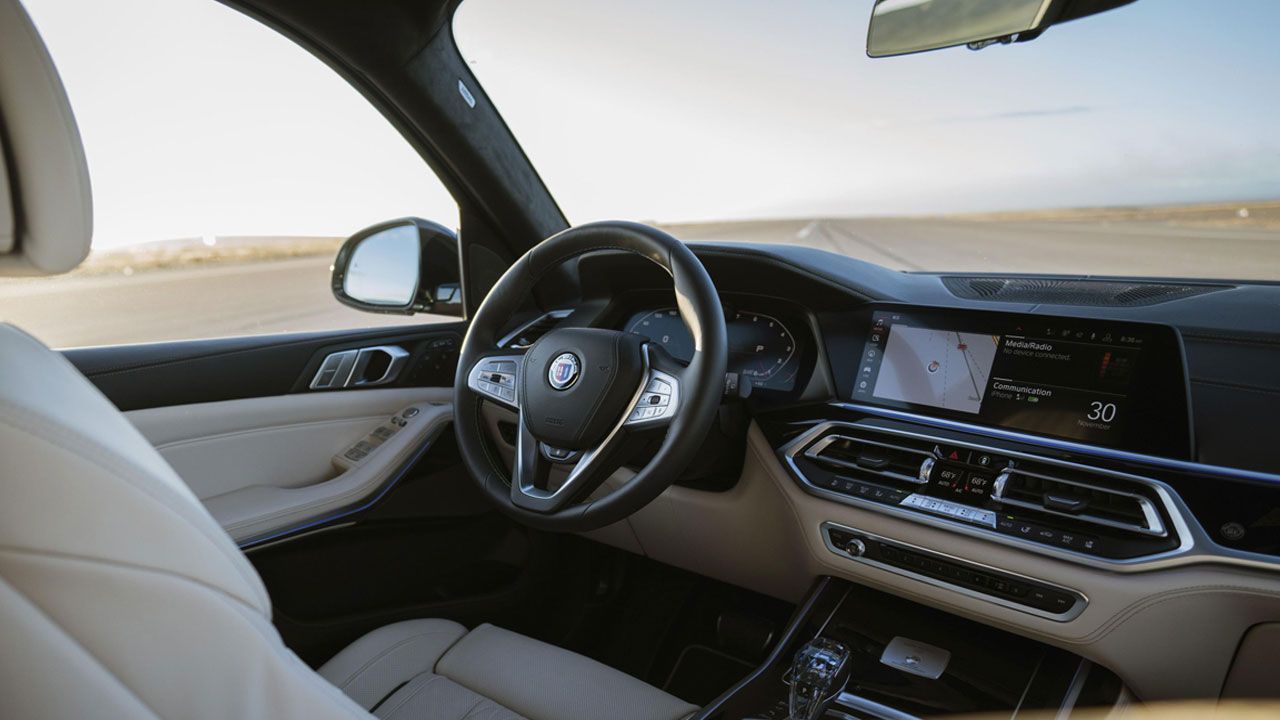 Power continues to be put down on the road via the car’s all-wheel drive system featuring a limited-slip rear differential. Alpina’s integral active steering with active kinematics control from ZF meanwhile gives the car a four-wheel steering system.

Alpina clearly states that to achieve the 288km/h top-speed, you must order the car with the company’s standard 21-inch wheels that are shod with 285/45R21 section front and rear tyres. But there is an optional Alpina Classic 20-inch wheel size setup on offer, as well as a 23-inch summer tyre setup with wider rear tyres.

Oh, and you get an all-new, stainless-steel Alpina sports exhaust system with active flaps to bring out the XB7’s signature V8 soundtrack in Sport mode.