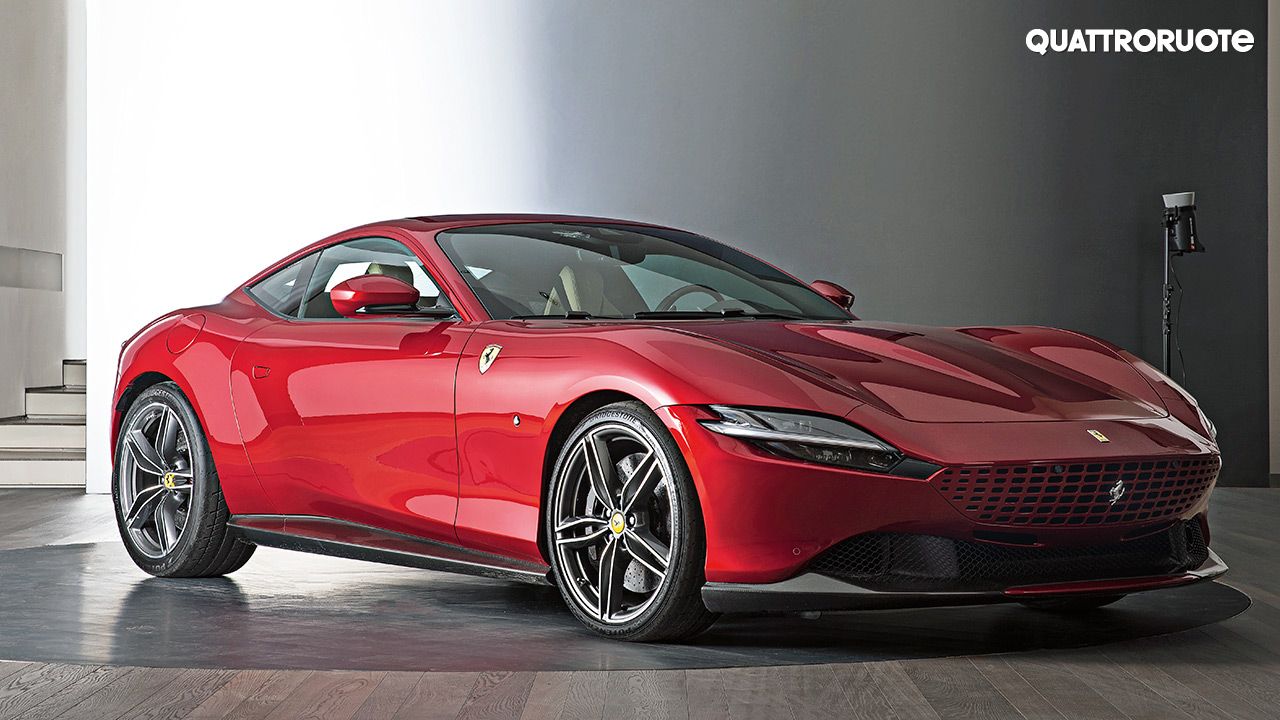 At Maranello, they’re recreating the past like never before. The Roma is their attempt to bring the past into the present.

One of the most crucial ingredients of any self-respecting Ferrari – one that goes to the very heart of every model conceived at Maranello – is a reference (either implicit or explicit) to the brand’s past. But such a link to the past is always challenging, because Flavio Manzoni, who leads Ferrari’s team of designers, avoids paying homage and prefers cultured rereading and personal reinterpretations of the past.

So, a bridge to a time gone by – but only if it’s perfect! However, if you call a car the Roma, the reference to the past becomes inevitably generous. Why? For one, among its many implicit meanings, is a reference to the idea of la dolce vita, i.e., the good life – to a time when Ferraris were a symbol of the Roman belle époque, an age that seems to have been lost in time.

Return to Order
Seen from today’s perspective, which has become accustomed to high tones and strong colours, the Ferrari Roma is a sort of healthy and very welcome retour à l’ordre (return to order) – it speaks a very clear language. It has an air of the traditional GranTurismo – its classic form is marked by a sense of volume instead of being cluttered with lines. And its body seems to have been sculpted with a touch of air instead of machines and tools.

So, with the link to the luxurious past, here is what the Roma has become – strong, desirable, and acclaimed. And yet, even in the borderline case of the Roma, which is less afraid than other Ferraris to draw from the vocabulary of nostalgia, these traits or characteristics undoubtedly reflect the influence of the present and a hint towards the future. 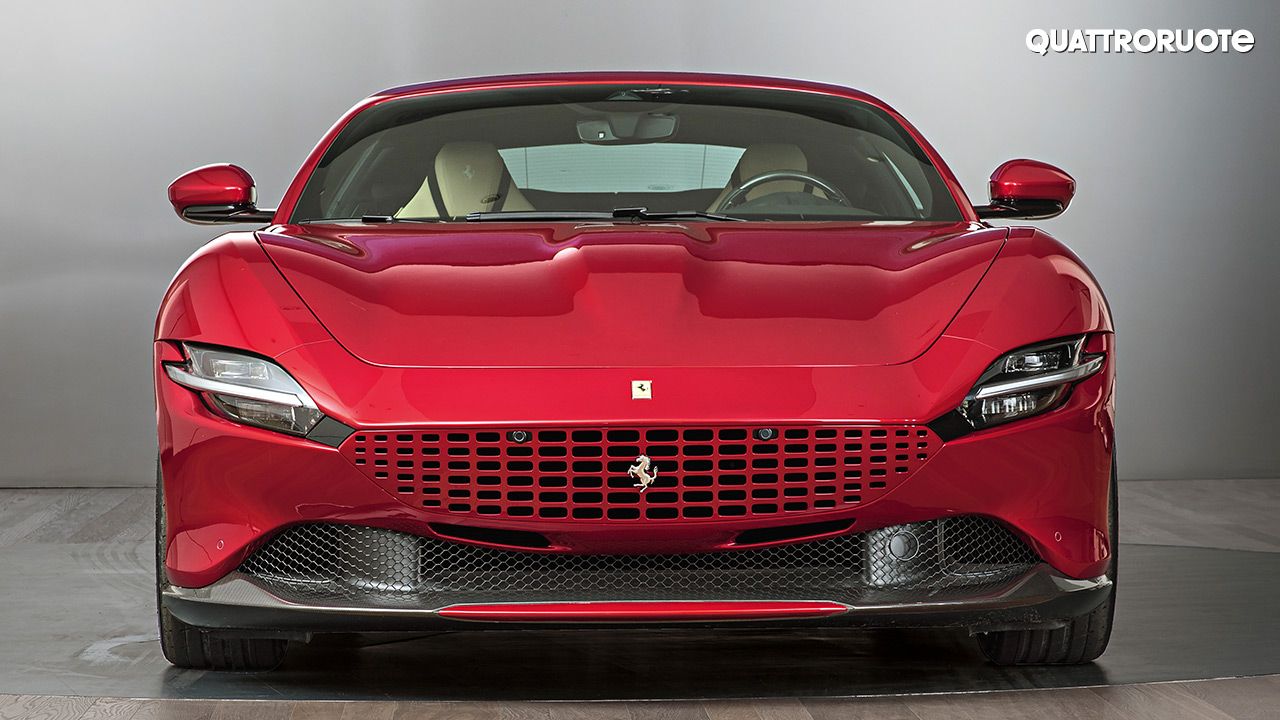 Yesterday, but also today & tomorrow
Now, it’s time to open the driver’s-side door. True, it’s a simple gesture, but it’s enough to catapult you immediately to the opposite end of the pendulum of time – you feel as if you’ve been hurled into the affluent and technological present from the luxurious past in a time machine.

Inside, Roma is a cornucopia of all the latest technologies that the auto industry has to offer today. And the interesting aspect is that they are not devoid of the human touch. What’s more, some of the things here have never been seen before in a Ferrari!

Here, everything in front of the driver is exactly like that of the SF90 Stradale – the highest performance model in the existing range. The digital instrument panel is identical and sits in a 16-inch screen, which, partly because of technological virtuosity and partly for better readability, has a concave surface. It hardly matters whether it’s the first reason or the second, what matters is that it’s unprecedented in the world of cars.

Now, coming to the second category – things that have never been seen before in a Ferrari – there’s a tablet at the centre of the dashboard, which has never had a vertical orientation before. This choice, however, is not without reason – specifically, there are two! The first is related to ergonomics and usability – a vertical screen makes it possible to divide the screen into two zones, the top half for infotainment functions and the bottom half for the air conditioning controls.

The other reason is related to the overall design of the cabin – a horizontal screen would’ve made it difficult to achieve the dual-cockpit effect that gives life to the symmetrical double-cradle architecture for rider and passenger.

The steering wheel, too, has been taken from the SF90 and remains unchanged. Despite being a car that’s inclined towards Ferrari’s grand touring (gran turismo) cars – indeed, the Roma is a step further in terms of making a clear distinction between these types of cars and the super-sports cars – this new eight-cylinder Ferrari seems to have a bias towards technology. All the controls are on the touchscreen, which means that until you press the engine start button on the steering, you can’t see anything. The Roma does, however, get a Manettino – another carryover from the SF90. But, unlike the California T and Portofino, the Roma offers five modes. Some may consider these small details, but we think that they represent the Roma’s qualitative leap forward. 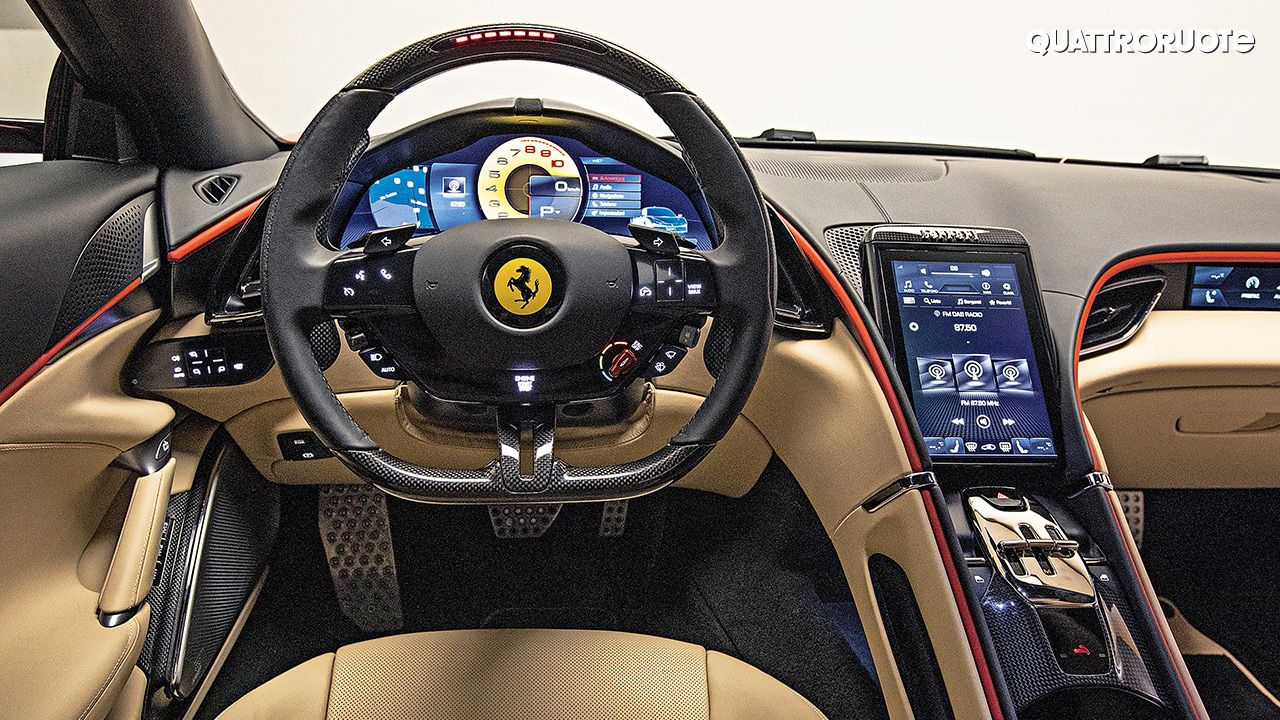 What will it mean?
Looking through the glass of nostalgia, the Roma, no doubt, represents la dolce vita, however, it would be no less important to talk about what the Roma means for the future of Ferrari. After all, the coordinates to contextualise the future are offered by the car’s architecture, which is a profound refinement over that of the California T and Portofino. The wheelbase, however, remains the same at 2.67 metres. Now, for the first time, Ferrari, which, for the last ten years, was faithful to the coupe-cabrio formula, has used this platform to create a traditional coupe. 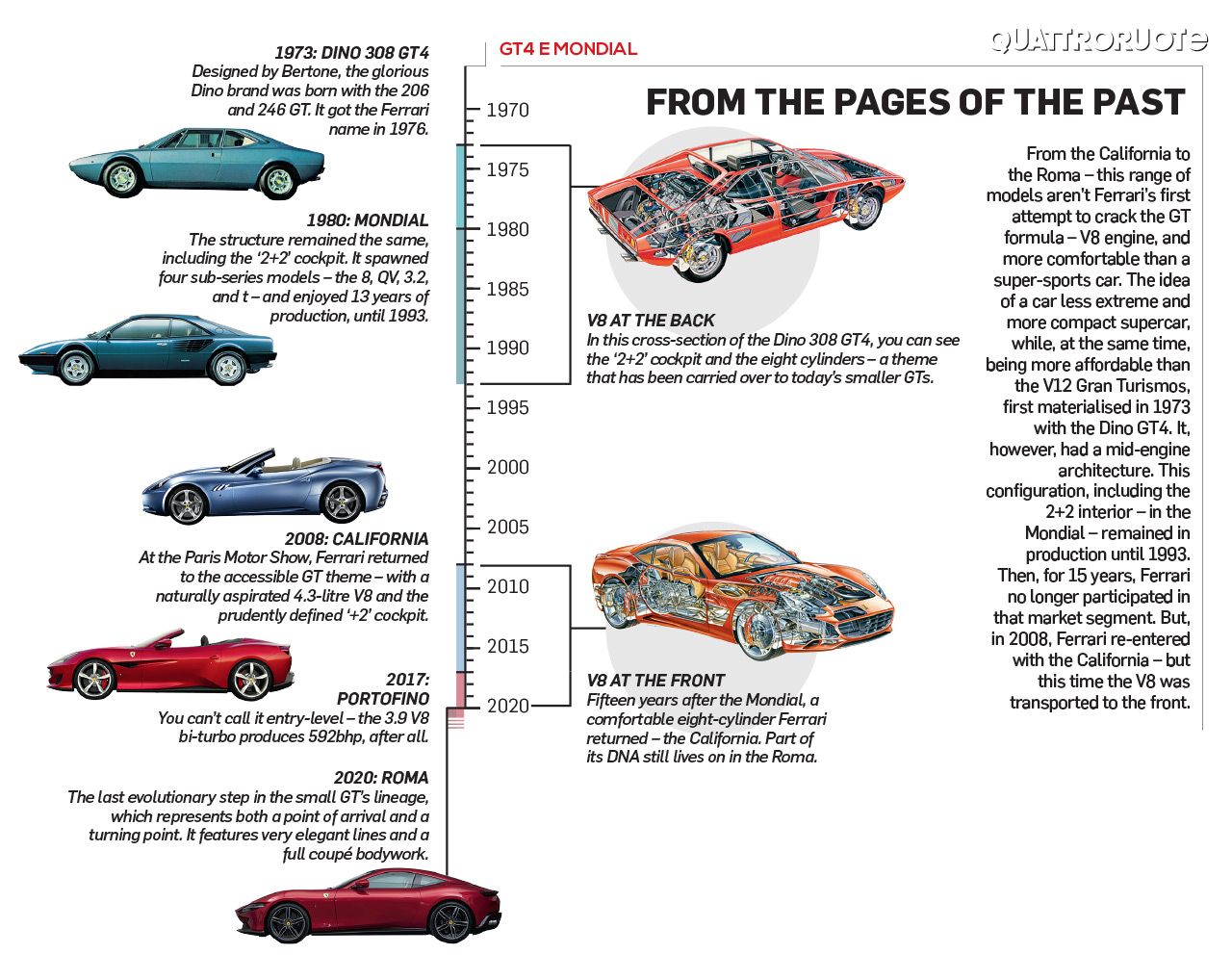 This could translate into something that we already have on the tip of our tongue, but which is still difficult to pronounce – a Spider, just as pure but, perhaps, with a canvas roof. A wild speculation? Maybe! But we’re not to fault here, it’s the Roma’s fault. Why? Well, if you raise the bar for Maranello’s range so brutally, of course, we won’t be able to keep our feet on the ground while thinking about the future.

Essentially Elegant
Ferrari’s new entry-level car makes such an impression that it renders the definition of entry-level completely reductive. In other words, the Roma’s style gives it a significance far beyond its objective commercial positioning. 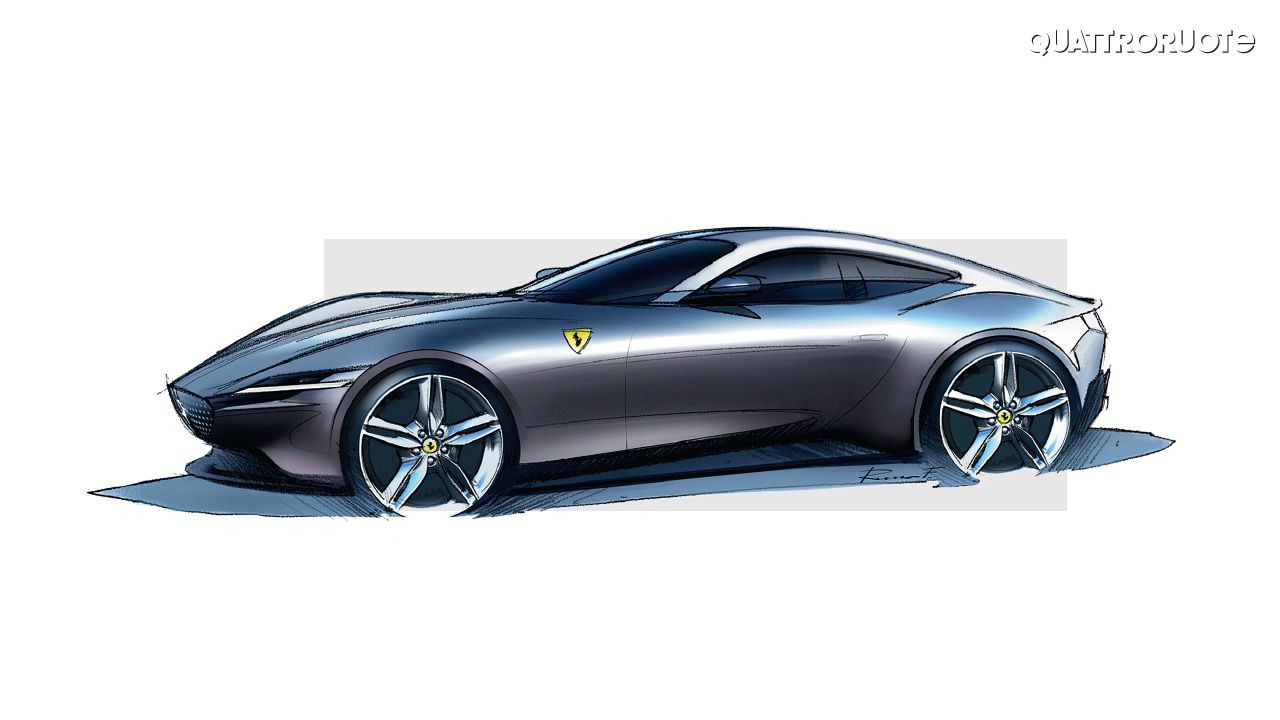 What was the idea behind its design?
We wanted to express ourselves with cleaner shapes than those of our extreme cars, inevitably conditioned by technical aspects. The intention was to emphasise and distinguish its GT soul more clearly from our super-sport cars. With the Roma, we are starting a discourse that will make GTs even purer, more sophisticated, and refined than the Portofino and GTC4Lusso.

It’s no coincidence that you insisted on removing the brand logo from the fender, is it?
Yes, it’s an option that we’ve always offered on all our models, but here we wanted to underline it – the Roma’s profile looks particularly good, even without the badge.

Where did that grille design come from?
We wanted something that wasn’t flashy and vulgar. In fact, we wanted exactly the opposite and, thus, came up with a monolithic volume, without frills. The area that is responsible for most of the cooling is the lower portion, which is aesthetically neutral. Above it, we’ve created an area to match the bodywork, which has a procedural porosity, without perimeter. So, when you look at the nose, you can read it more as ‘full’ than ‘empty’.

Screens seem to have become very popular with customers…
People like them because they’ve an added value, which makes the passengers experience richer, allowing them to have a more involved experience.

Both the Roma and the SF90 have an identical instrument cluster and steering wheel. Will they be the same on all new Ferraris?
Come on, you don’t think we’re so predictable, do you?

Far from the crowded world premiere, in the privacy of a photographic studio, in Maranello, the Ferrari Roma, in the red Portofino colour, allowed itself to be studied in detail for an entire day. 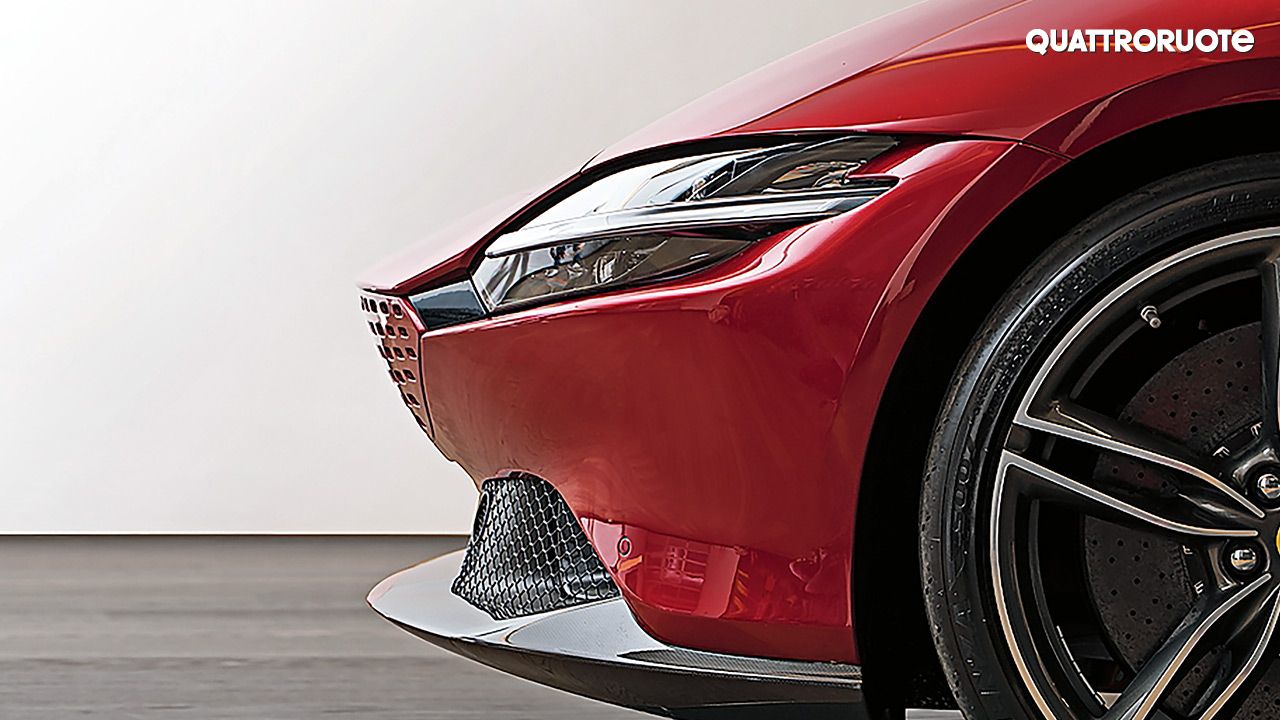 The rear of the Roma is dominated by a horizontal section that connects the light clusters, resembling the pattern of the front LEDs. At the front, it has a traditional shark nose, with an original grille and matching bodywork. Below, is a picture of the mechanical sculpture inside the bonnet – a 3.9-litre V8, which produces 612bhp.