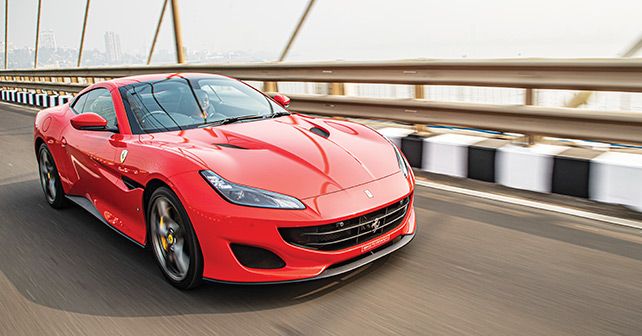 It’s no secret that for Enzo Ferrari making street-legal production cars was simply a means to an end (funding his racing programme), and yet he ended up creating production cars that exemplified the pinnacle of motoring in one way or another – a tradition that continues even today, a time when the lines between sportscars and supercars are getting blurred by the day.

But what is it that really makes a Ferrari extraordinary? Is it the Italian design? The attention to detail? Or is it, perhaps, the sheer power and acceleration? Or a perfect amalgamation of them all? A quick drive of the GTC4Lusso T and the Portofino gives us the answer. 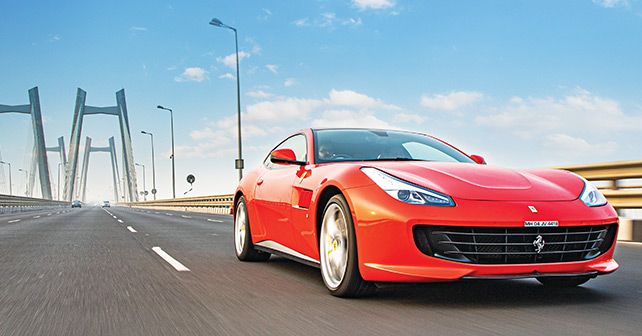 Four-topper
I recently stumbled upon a chance to take the Ferrari GTC4Lusso T for a short spin in Mumbai, and it was love at first drive. You see, like all cars with the Prancing Horse insignia, it, too, has a jaw-dropping design. However, it’s a Ferrari like no other! And the reason is all in the name – it’s a GT Coupe with 4-seats and special attention to luxury (lusso in Italian).

Fans of the brand may say that the GTC4Lusso T is not as breath-taking as other Ferraris, but, personally, I think that it’s very alluring. It perfectly encapsulates Ferrari’s design ethos despite being a shooting brake.

With a long, never-ending bonnet and wide rear haunches, the GTC4Lusso T’s design is a perfect mix of elegance and performance. Ferrari has simply nailed the stance, not to mention the space and practicality it creates. 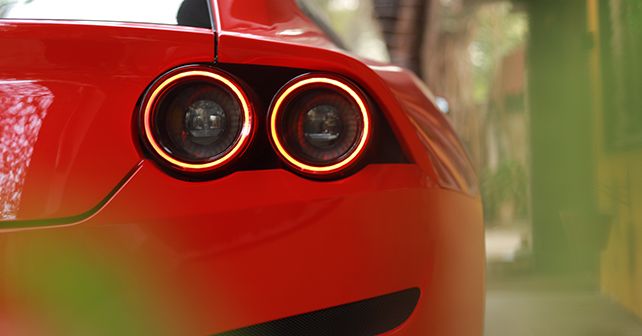 And while you wouldn’t necessarily expect it from Ferrari, but the GTC4Lusso does have reasonable space for four passengers. Even mundane tasks like ingress and egress aren’t all that painful either, despite only 2 doors. And if that wasn’t enough, the GTC4Lusso even has a 450-litre boot.

Different materials and layers come together perfectly to give the cabin an incredible sense of style and panache. And when you hold that flat-bottom steering wheel, with the optional carbon fibre trim and shift lights, you know that you’re in for an incredible experience. So, let’s hit the start button, shall we?

At the heart of this brilliant machine lies Ferrari’s ‘International Engine of the Year’ winning 3.9-litre bi-turbo V8, which is almost as fast as its V12 counterpart. It goes from 0 to 100km/h in 3.5 seconds – just one-tenth of a second slower than the V12. Turbo-lag is pretty much non-existent, and power is always available whenever you demand it. 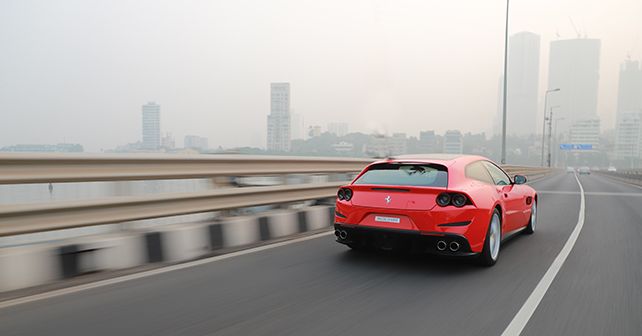 Going hard on the loud pedal burdens the electronics with the task of keeping this rear-wheel-drive monster in line. And while it does what it does best – no surprises there! – it does so in a manner that’s quite comfortable, and it’s this comfort quotient that took me by surprise.

When you think of a Ferrari, you don’t think of comfort but of a hair-raising, spine-tingling experience – something that’s as natural to a Ferrari as its exquisite design. But here’s a Ferrari that makes you feel as if you’re on a flying carpet. In fact, I would go so far as to claim that it’s easily the most practical Ferrari that you can get your hands on today – full credit to the MagneRide (magnetic) adaptive dampers.

During my short drive, I didn’t encounter too many corners, but the few that came my way were tackled with supreme confidence by the GTC4Lusso. The rear-wheel steering and the 46:54 rear bias ensure the GTC4Lusso T’s ninja-like agility.

The biggest takeaway from my short spin was just how usable the GTC4Lusso T really is as an everyday supercar. It seats four people in comfort, can munch miles for breakfast, lunch, and dinner, and, at the same time, offers the driving thrills that you expect from a Ferrari. And that, for me, is a huge win!

Top-down treat
Many argue that California was a deviation from the idea of a true Ferrari. While I can’t really comment on that, since I haven’t driven California, what I can tell you is that despite these apprehensions, it was an absolute hit on the sales charts. In the 10 years that California was on sale, Ferrari sold more than 11,000 samples.

So, naturally, its replacement had to be faster, more stylish, and, above all, an authentic Ferrari. And that’s exactly what the Portofino aims to be. 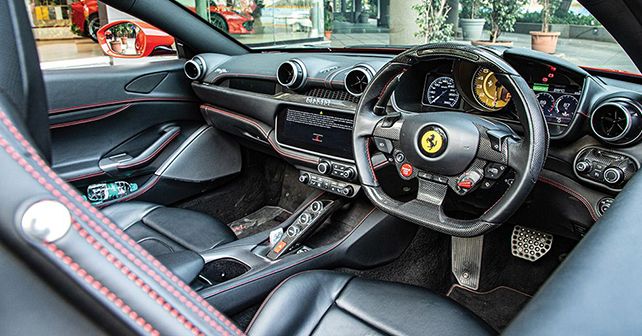 And while these numbers are pretty much identical to those of the GTC4Lusso T, the Portofino feels a lot more dramatic in the way it drives. The response to inputs is almost telepathic, which, together with an insanely wide torque band, makes the Portofino always ready and willing.

The ferocious speed of the car is perfectly complemented by a loud bassy note, which, to a petrolhead, is what Für Elise is to a classical music lover. And the fact that you can hear it in its full glory with the top down only makes driving it that much more sensational. 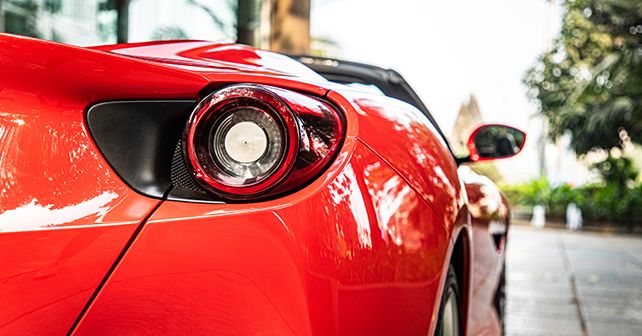 Inside, the dashboard is identical to that of the GTC4Lusso T. But, since the Portofino is a cabriolet, it doesn’t quite offer the same levels of practicality and comfort. Obviously, the cabin isn’t as spacious as the GTC’s. The Portofino also feels a tad bit firmer in the way it drives. In fact, after driving the two cars back-to-back, I found the Portofino to be a lot more involving than its GT sibling. That being said, it doesn’t quite tackle bad roads with the ease of the GT.

However, it does allow you to live the top-down experience in the best way possible. The Portofino may be an ‘entry-level’ Ferrari, but it is, without the hint of a doubt, one of the most enthralling boulevard-cruisers out there.

Split Personality
From the engine to the interior, both these Ferrari’s have quite a few things in common, and yet they are as far apart as pasta is from risotto in the way they feel from behind the wheel. But, despite the difference in their flavours, they both are equally delectable.

Sure, a lot of brands produce sports cars that are equally fast and exhilarating to drive, but they are more like multicuisine restaurants with a menu full of options. Ferrari, on the other hand, is like a Michelin star speciality restaurant – and that’s why everything it does has an unparalleled sense of satisfaction.

X-factor:  In excess of 600bhp, four seats, and a Ferrari badge, need we say more?

X-factor: A boulevard cruiser and a track tool – this ‘entry-level’ Ferrari has a split personality. 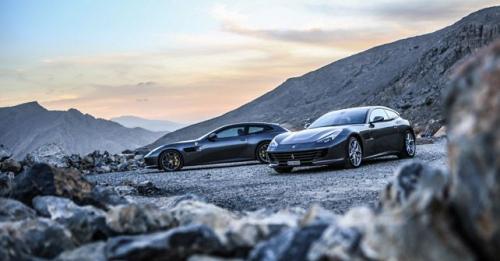 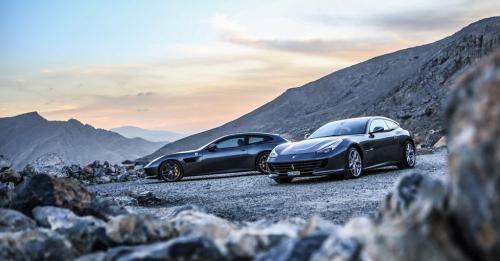 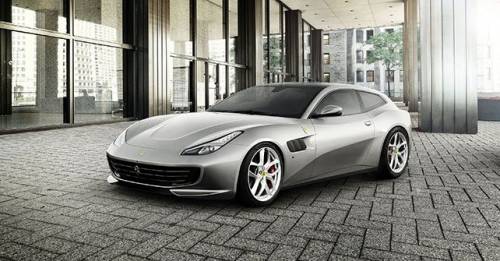