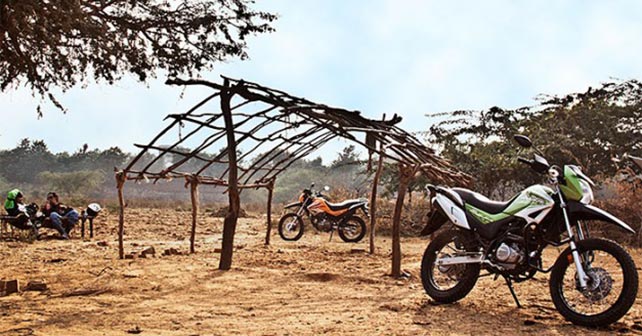 The Impulse heralds in a new genre of motorcycle on Indian roads.

It took a very long time coming and now that it’s here, I am going to have my fun – my long overdue fun. India’s first dual-purpose motorcycle had been presented in a nice little package. A good presentation, as they say, is half the battle won.

There have been a whole lot of motorcycle enthusiasts who have been demanding an off-roader for a long time now, and Hero MotoCorp have bravely taken the plunge. The Hero Impulse 150 is the first motorcycle in the off-roader / dual-purpose genre and I am sure the floodgates will open very shortly. So it was impossible for us to not wait for this machine to do our Hero Impulse and to figure out if delivers as much as it promises.

First impression does count a whole lot. If you like a bike at first glance, chances are, you will continue liking it even when you find chink-in-the-armour later on. 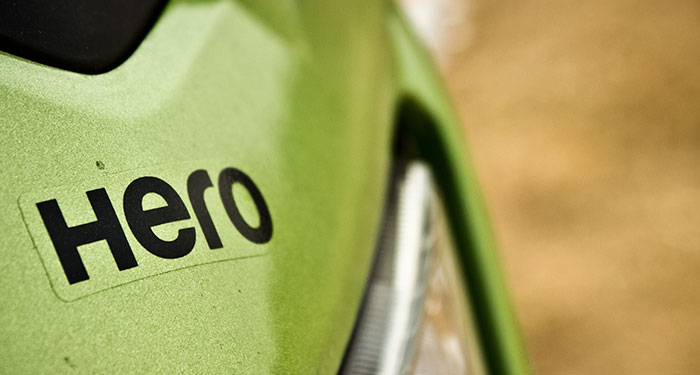 When I saw the initial pictures of the Impulse, I thought-well, here is a beginning. A proper factory made off-roader – not the concoction that we cook up in those small garages. Some of our concoctions do really look good and perform too but “jugads” never really work and as we put them to the test, we find that they have many shortcomings.

The Hero Impulse 150 comes as a refreshing change from the run-of-the-mill commuter and street bikes that crowd Indian streets. The sleek and tall dirt-bike design does grab a whole lot of eyeballs. Long travel suspension, mono-shock, an off-roading seat that climbs up to half the tank, tank fairings, a straighter handlebar, digital speedo, clear-lens headlamp, high front mudguard, chunky on / off-road tyres with 19-inch in front and a 17-inch at the rear, shiny black rims with chrome spokes, and a motocross style exhaust that peeks out from the right end of the seat all add up to the presence.

As I swing a leg over the seat for our Hero Impulse, I feel the difference in the stance. It is a high bike but does not put undue stress on the riders to plant their feet on the ground. The high sitting stance is a boon in our congested roads and I could see over the car in front of me, and the sleek body allows it to flick through heavy traffic. 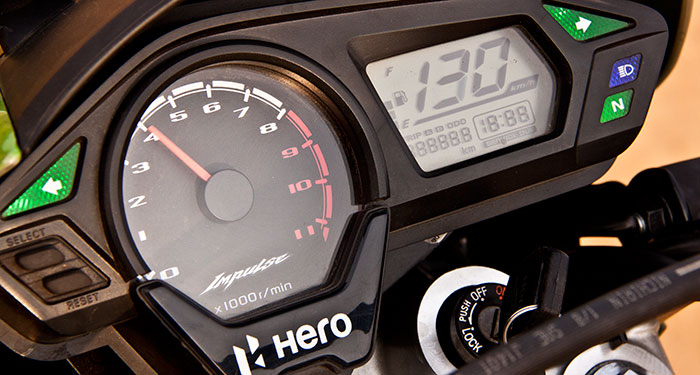 As I thumb the starter button, the 150cc engine purrs to life. It doesn’t roar, growl or shout like off-roaders usually do. It purrs and I’m a little disappointed with that. The CBZ X-Treme engine which is housed inside the semi-double frame seemed more refined than before and a company engineer says it is due to the new cam and the balancer shaft that cancels out the vibrations.

With a power output of 13.8 bhp at 7500 rpm and a torque level of 13.6 Nm at 5000 rpm, it certainly is not the most powerful engine around. The mid-range is pretty good and the bike does what it is supposed to do with ease. At 134 kilos, it does not weigh the earth, and the power propels the bike pretty well. I guess it would touch the 100 kmph mark in about 20 seconds or a little more but does it really matter? Not too many people are going to ride a 150cc off-roader at 100 km/h anyway.

On city roads, the Hero Impulse 150 behaves like a supermoto. The roundabouts in Delhi are excellent places to try out the Hero Impulse 150. As I went into a rather deserted roundabout with perfect tarmac, I leaned the bike into the right-hander at a relatively good speed, stuck my right leg and the left elbow out. The bike stuck to its line like glue and I never felt like I was losing it. The chassis geometry, coupled with the mono-shock and the Ceat tyres gives the bike excellent road-holding properties. The surefootedness makes it great fun to throw and flip the bike around in corners. I wish I was doing these rides on some narrow hilly road. 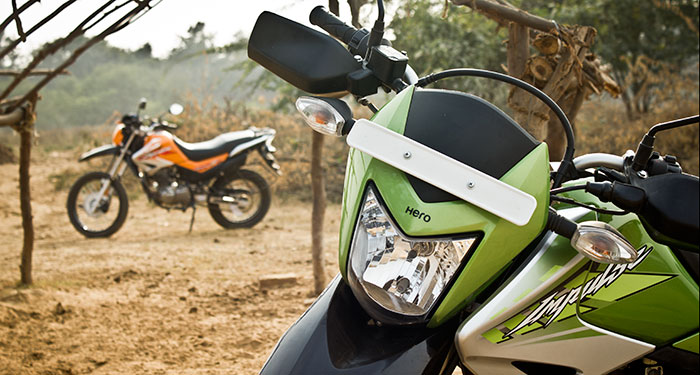 Show some dirt and the Hero Impulse 150 comes into its elements. Rehan Khan, who is national level motocross and autocross champion, put the bike through the grill and it certainly put up a very impressive performance. It tackled the loose sand, sharp turns, dips and jumps with aplomb. Both of us jumped and landed with ease and the bike never lost its composure after it landed at speed. The monoshock ensured that there was no backslap. On the dips and very rough surfaces, all we had to do was stand up on the footpegs, open the throttle and hold firmly and the rear took care of itself. I would like the telescopic front to be a wee bit harder to ensure better feedback on bad surfaces. As of now, the suspensions are super smooth and make the roads look and feel good as it cancels out the potholes and broken tarmac.

I don’t know how the Ceat tyres, made especially for the Hero Impulse 150, will behave in slush, but on dirt, it was absolute fun to do the slides and drifts. We could lean the Hero Impulse 150 way down and on second gear yank the throttle wide open. The wheelspin slid the bike around until it opposite-locked and then came to its own as we powered out from the slide.

We, especially Rehan, grinded the bikes. We jumped, slid and drifted, and mostly on 2nd and 3rd gears, but the engine never complained. This proven powerplant can easily sustain 80-90 km/h on the highway for long stretches. And on Indian roads, this is a good enough speed, although overtaking has to be done in a calculated manner. 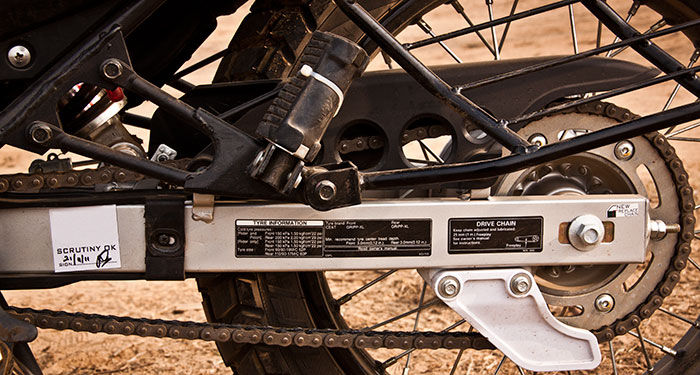 I thought that the brakes were a little spongy on the first day, but realised that they were like that for a purpose. On dirt, jamming the brakes is a recipe for disaster. Once I got over the spongy feel of the brakes, I found the 240mm front disc and the 110 mm drum brake performed just fine on the tarmac.

At `68,800 ex-showroom, Hero Impulse 150 is very decently priced. It has a distinctly different and fresh appeal. From the noise that it is raking up, the bike will surely do well in the hilly states and places with bad roads.

I absolutely like this bike and I’m already looking forward to taking the Hero Impulse 150 on short off-roading trips for a few days. But first, I am going to throw away that sissy exhaust and that obnoxious saree guard. If you know anyone who goes offroading with a saree draped pillion rider do let me know – that would make a very good story