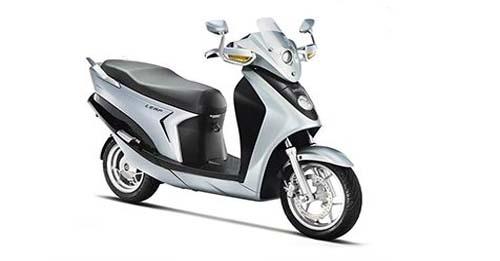 Hero Leap Hybrid SES is not launched in India yet. Information on this page is tentative.

Showcased as a prototype at the 2012 Auto Expo in Delhi, the Leap Hybris SES was unveiled in its pre-production guise just before the 2014 Auto Expo. The Leap Hybrid SES is the first electric scooter from the Gurugram based automaker.

The Leap Hybrid SES will be powered by an 8kW PMAC motor paired to a lithium-ion battery and a 124cc engine that uses a three-litre petrol tank. While the former will be the main source of power for the Hybrid scooter, the petrol engine will propel as a range extender.

Our sources suggest the Leap Hybrid SES to be in the early stages of production, and it will certainly launch by the end of next year. We expect Hero to aggressively price their Hybrid scooter, somewhere around Rs.1 lakh. If the scooter retails at the said price, it will lock horns against the Ather 340 and Okinawa i-Praise.