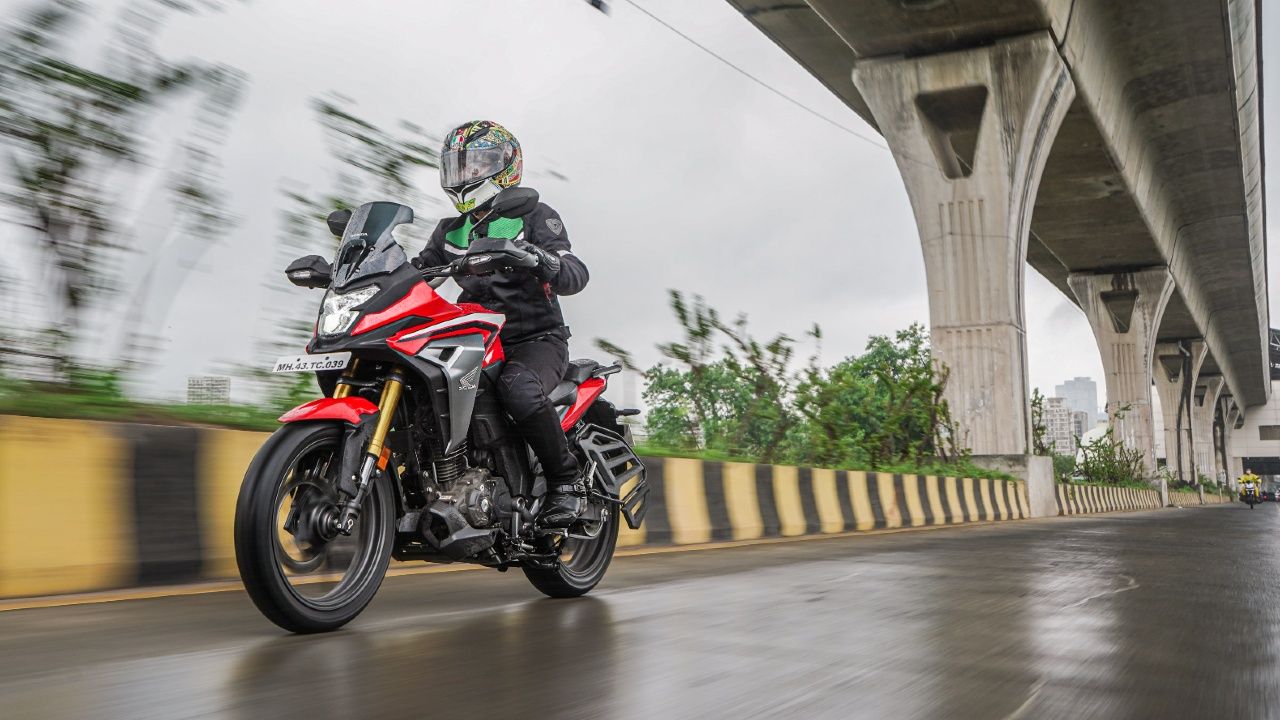 Is the Honda CB200X just a Hornet 2.0 on stilts, or is there more to it than meets the eye? Does it really justify the Rs 1.44 lakh asking price? Ravi takes it for a ride to find all these answers and more.

Over the past few decades, the term SUV has been heavily devalued by regular front-wheel-drive crossovers or even some hatchbacks on stilts, which are classified as ‘SUVs’. This, of course, has been a topic of hot debate among purists for ages. And irrespective of the side you find yourself in this debate, there is no denying that these SUV-styled high-riding cars have gained tremendous popularity amongst the masses, and one of the primary reasons for that is the state of our roads.

But why am I talking about SUVs in a motorcycle review? Well, the reason for that is rather straightforward. ADVs are the SUVs of the two-wheel world. And while ADVs are gradually becoming the preferred weapon of choice for many, the term itself is gradually losing its essence. The Honda CB200X is based on the Hornet 2.0 and is a rather modest interpretation of the term ADV. We recently spent some time with the CB200X to find out how different it is from its naked sibling, and whether it offers good value for its Rs 1.44 lakh asking price? So, let’s get started. 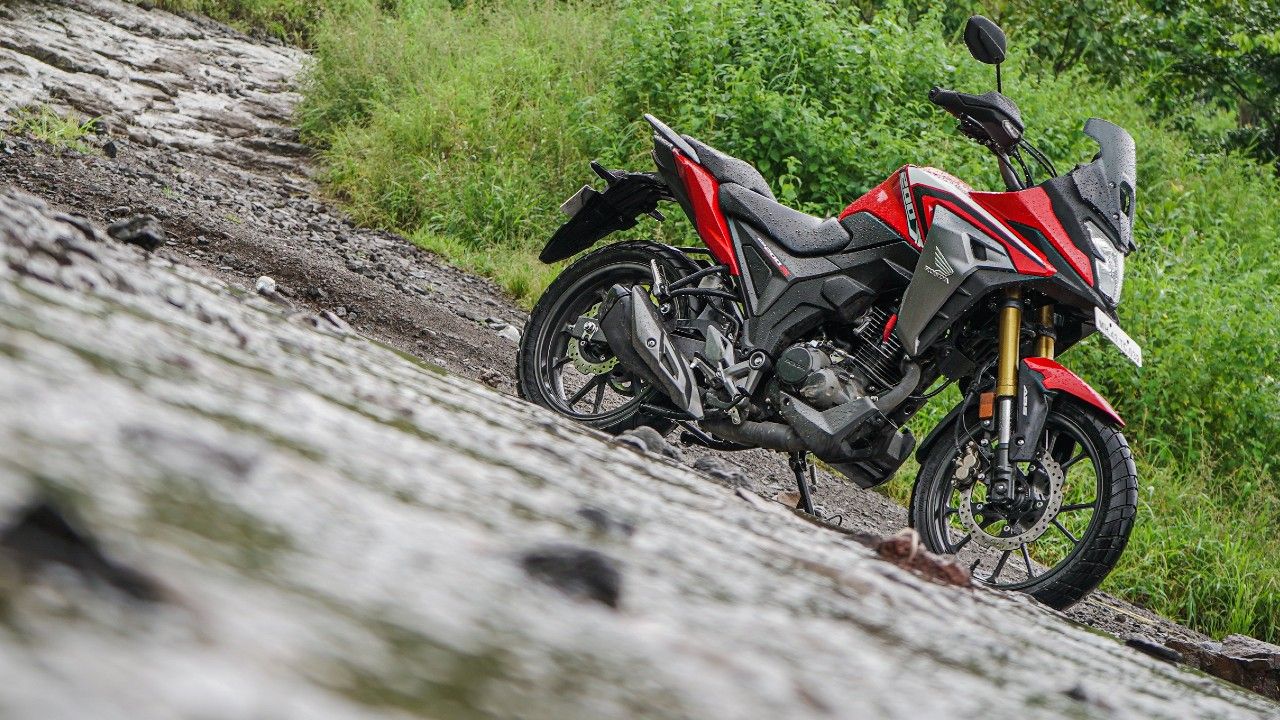 The CB200X clearly gets its design inspiration from the larger CB500X. At the front, the CB200X shares the LED headlight unit with the Hornet 2.0 but gets bold black surrounds and the stubby beak, just like its namesake. There are other similarities between the two as well, like the silver half fairing and the stubby windscreen, to name a few. The knuckle guards with the integrated turn indicators and the plastic bash plate give it a rugged crossover-like appeal, although the latter is more for the benefit of its aesthetic appeal than functionality. The split seat is wide, comfortable, and marginally longer than that of the Hornet. Honda has done well to use some carbon fibre texture on the rear mudguard and around the instrument cluster to give the bike a premium appeal. Now, while the CB200X’s brochure tells us that it is marginally shorter in length than the Hornet 2.0, Honda claims that the length is identical, which means that there is an error in the document. The 200X is wider and taller than the Hornet though. 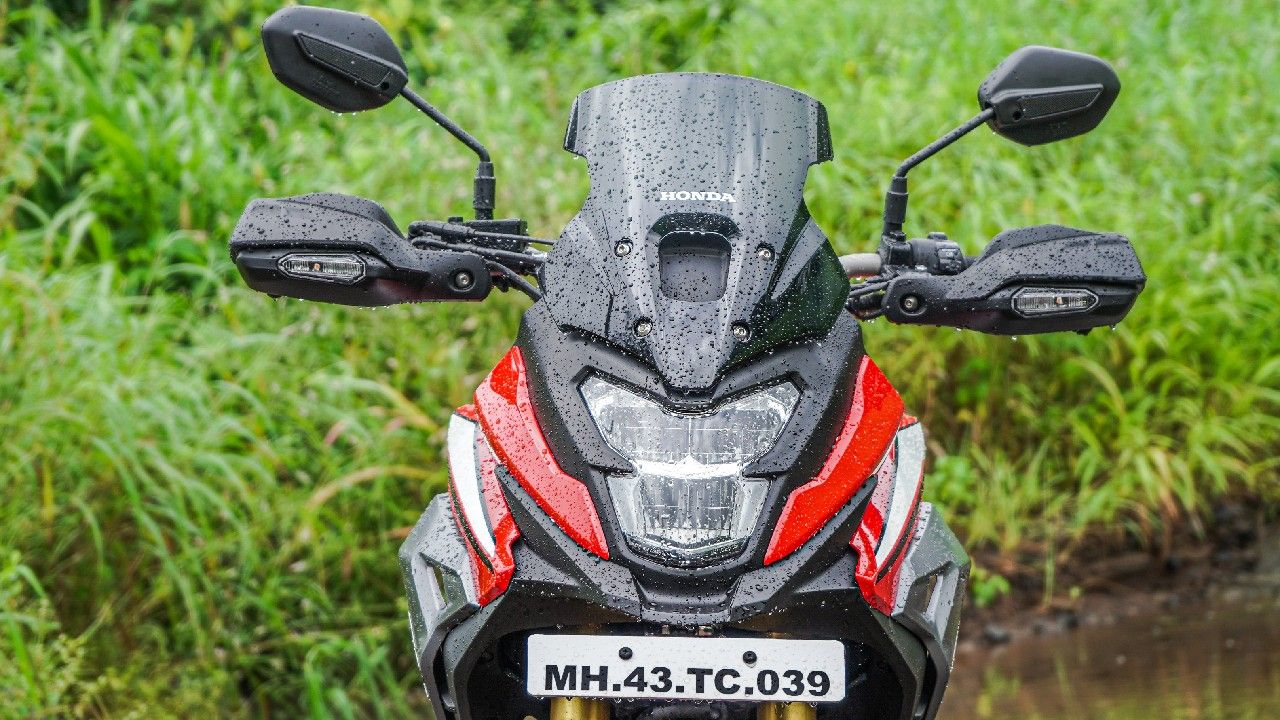 For a motorcycle that demands Rs 1.44 lakh, the CB200X is unbelievably low on features. While it gets LED lights all around, it misses out on some essential features like side stand engine cut-off and dual-channel ABS. Moreover, other motorcycles in this price range also come with Bluetooth connectivity and turn-by-turn navigation. 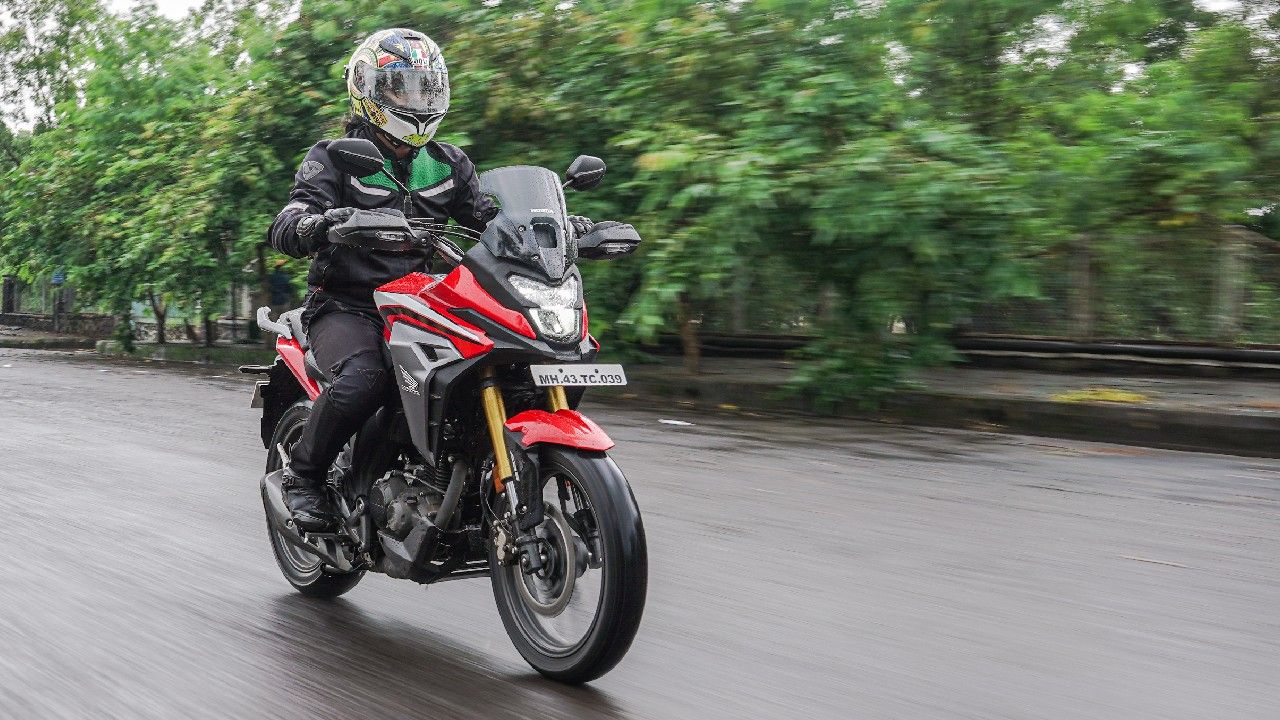 While the CB200X mimics its namesake in the design department, it is a photocopy of the Hornet 2.0 underneath the skin. And here, too, the rather uncomplicated single-cylinder 2-valve air-cooled motor makes 17bhp and 16.1Nm. Now, now these figures aren’t very impressive. For reference, at 17.8bhp and 16.45Nm, the Hero Xpulse makes marginally more power and torque. But if you leave the spec sheet aside, the Honda’s 184.4cc motor is quite likeable, and there are several reasons for it.

The engine has adequate pull in the lower rev band,  but it is tuned to offer stronger mid-range performance. Just like in the Hornet 2.0, here too, it feels its best in the 4,500 – 6,000rpm range. It is here that the CB200X packs a good punch. In fact, throughout our ride, I found myself keeping the tacho needle glued to that band, for it is here that the CB200X feels extremely enjoyable – the engine in this band never seems to be out of its comfort zone. 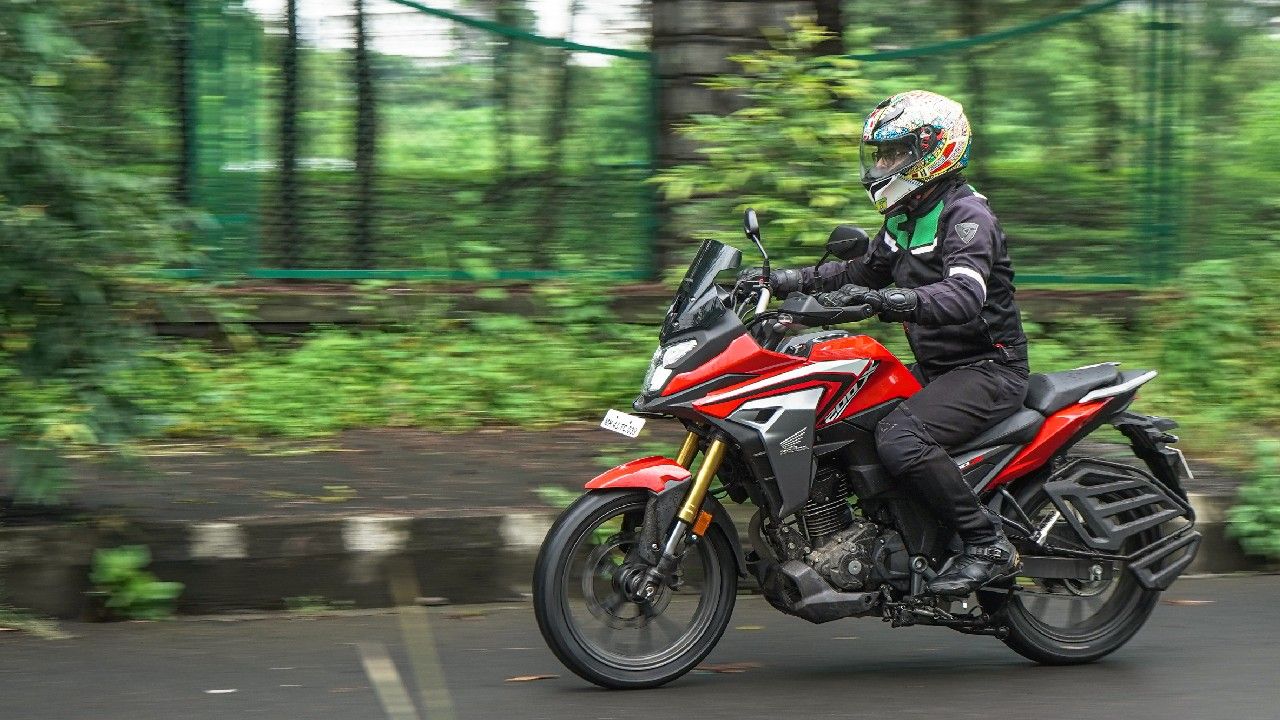 The peak power only comes in at around the 8,500rpm mark though, but unfortunately, the engine feels strained beyond 7,000rpm. And due to this vibey nature of the motor, it feels at home at the speed of around 85km/h. And this isn't something to be proud of, for there are even 160cc offerings that feel comfortable at around 95km/h.

Honda has done well with the 5-speed transmission though. The ratios are short, which means you can quickly move up gears while riding in the city – something that should also help in fuel efficiency. The clutch action is light, and it shifts with a likeable surety. 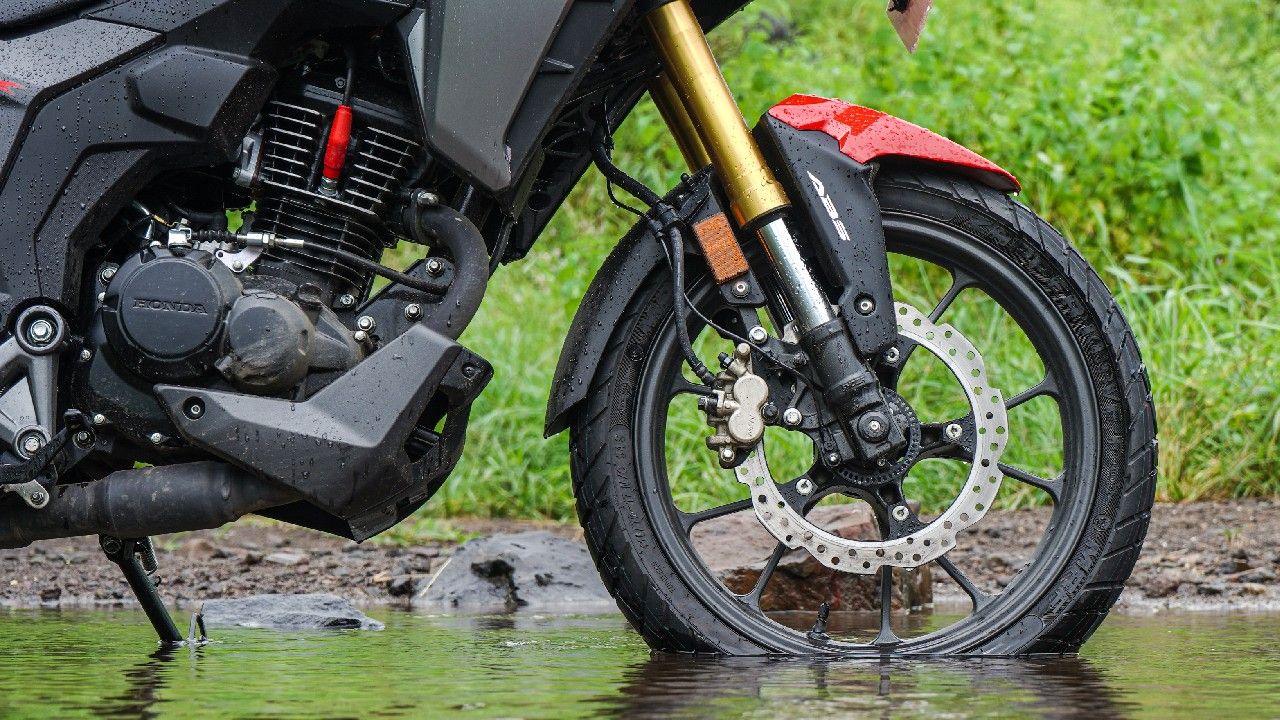 When you take the CB200X to twisty sections of the road, it exhibits superb composure, thanks to the firm suspension setup and its light weight. Although the CB200X tips the scale at 147kgs, which is 5kgs more than that of the Hornet, the additional weight is not easily evident. In fact, it is eager to tip into corners and feels impressively nimble. The tall and wide handlebar offers good leverage too. And while the handling is remarkable, the baby CB is a bit harsh in the way it manages bad roads. It tends to pass on the shocks to the rider, making the ride rather busy. 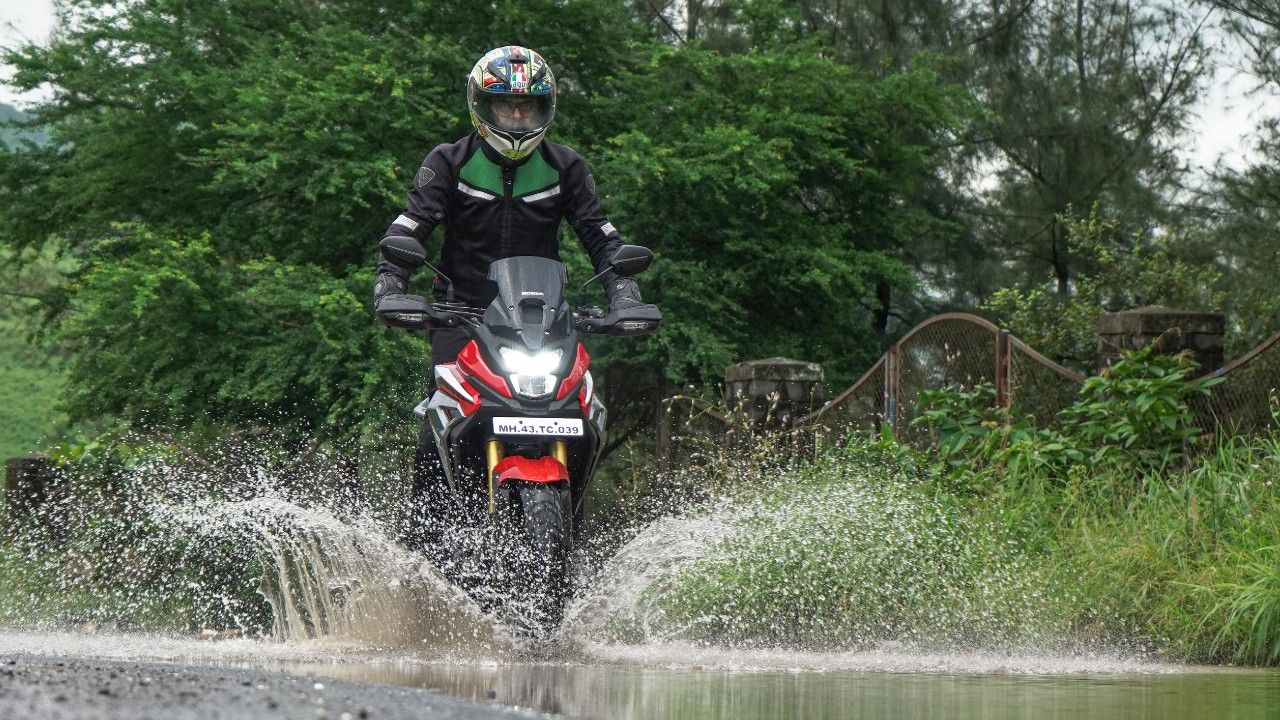 Thankfully, the riding position is upright, which somewhat cushions the blow. In fact, the position of the footpegs, the wide fuel tank, and the tallish handlebar ensure that you can very easily stand up on the pegs while tackling bad roads or off-roading. The CB200X, however, doesn’t make any exaggerated claims about being an off-roader – after all, it uses the same suspension components as the Hornet 2.0 with no additional travel. Nevertheless, the CB200X is well balanced and has sufficient low-end punch to accomplish the task. With that in mind, it does feel like a decent starter pack for some leisure riding over undemanding trails. However, if you are serious about learning how to ride off-road, you’d definitely be better off with the Xpulse.

Its stopping power comes from petal discs at both ends. While the performance of the front brake is satisfactory, the rear brake is impressively progressive and has a good bite. Honda could have fitted the motorcycle with a dual-channel ABS, which, to be honest, is expected at this price point. 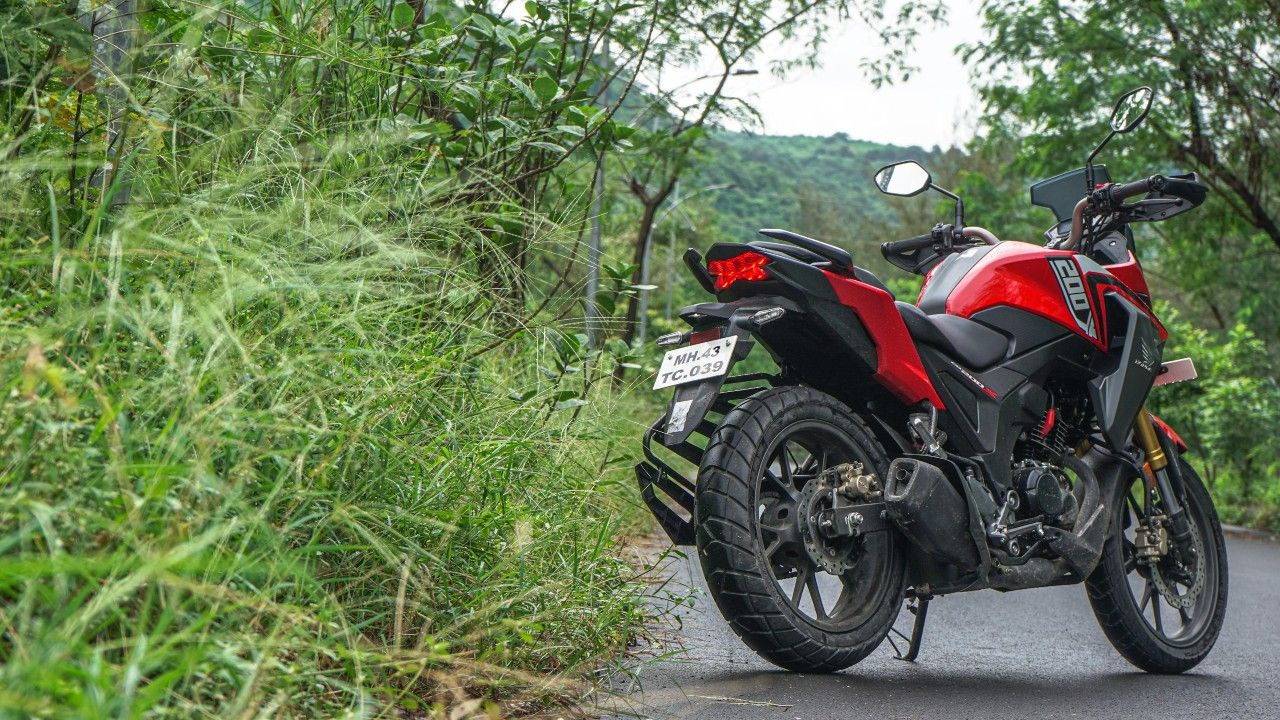 Honda has undoubtedly brought in some good motorcycles over the past year or so, but most of them have suffered from their high price tags. The CB200X finds itself in the same boat. At Rs 1.31 lakh, the Hornet 2.0 is an expensive motorcycle to start with, and the CB200X demands a premium of roughly Rs 13,000 over it. The additional cost is somewhat unjustified, especially considering that you don’t get much for it, except a high-riding motorcycle with different styling. Honda is clearly aiming for the gap between the Hero Xpulse and the Royal Enfield Himalayan, but it doesn’t have the substance to be a proper ADV. It can, at best, tackle some undemanding trails, but it's nowhere close to being a hardcore off-roader like the aforementioned motorcycles.

Having said that, it is worth mentioning that the CB200X, just like its naked sibling is a fun motorcycle. The firm suspension setup works well in offering an enjoyable riding experience, and the upright riding stance should be comfortable for long journeys. It feels well-built and premium too, especially in comparison to the Xpulse. So, if you seek a refined, reliable, and stylish ADV-looking motorcycle, the CB200X does fit the bill. But remember, it all comes at a price!

X-Factor: The CB200X is a true Honda in every sense, including the price!